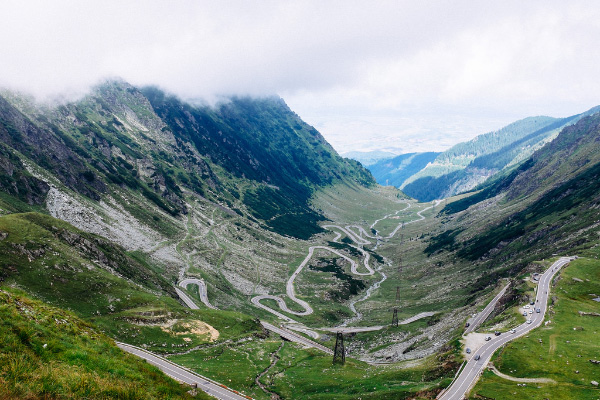 I love going on road trips, especially through the varied landscapes and contrasting cultures of Europe!

I took my first European road trip when I was 17, buying a second-hand car with some friends and driving it from Holland to Hungary. It’s still one of my favorite adventures. In the two decades since I’ve taken many more European road trips, particularly in southern Europe and the Balkans.

What’s so great about self-driving is that lets you stop at small villages, drive along coastal roads or via windy mountain passes, and explore some of the most captivating corners of the continent at your own pace.

To help you out, I put together these 7 best European road trips ideas…

Forget any preconceived notions you may have about Romania. Take it from me: Romania is bound to exceed your expectations. It’s safe, it’s charming, and it’s simply unmissable.

It’s also an incredible part of Europe to drive through, especially the Transylvania region with its fairytale Medieval towns and castles that inspired Dracula. 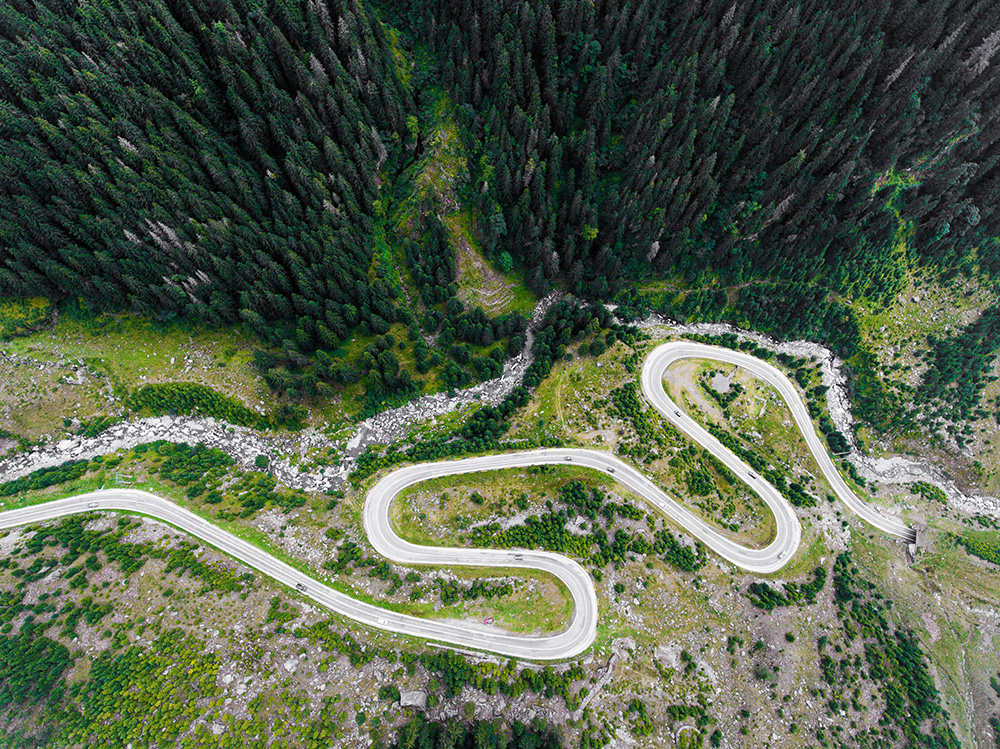 Since trains can be frustratingly slow in Romania, a road trip is actually the best way to see it. You can fly to the capital of Bucharest and rent a car there, but it can be better to start in one of the smaller cities such as Cluj-Napoca or Sibiu.

The mighty Carpathian Mountains divide Romania into two halves — and crossing them makes for some amazing drives. Most famed is the Transfăgărășan road, which snakes through the Carpathian peaks at altitudes up to 2,042 meters (6,699 ft). Its hairpin turns earned it a spotlight on the BBC show Top Gear, which called it “the best road in the world”, though keep in mind it can be closed due to snow from November till June. 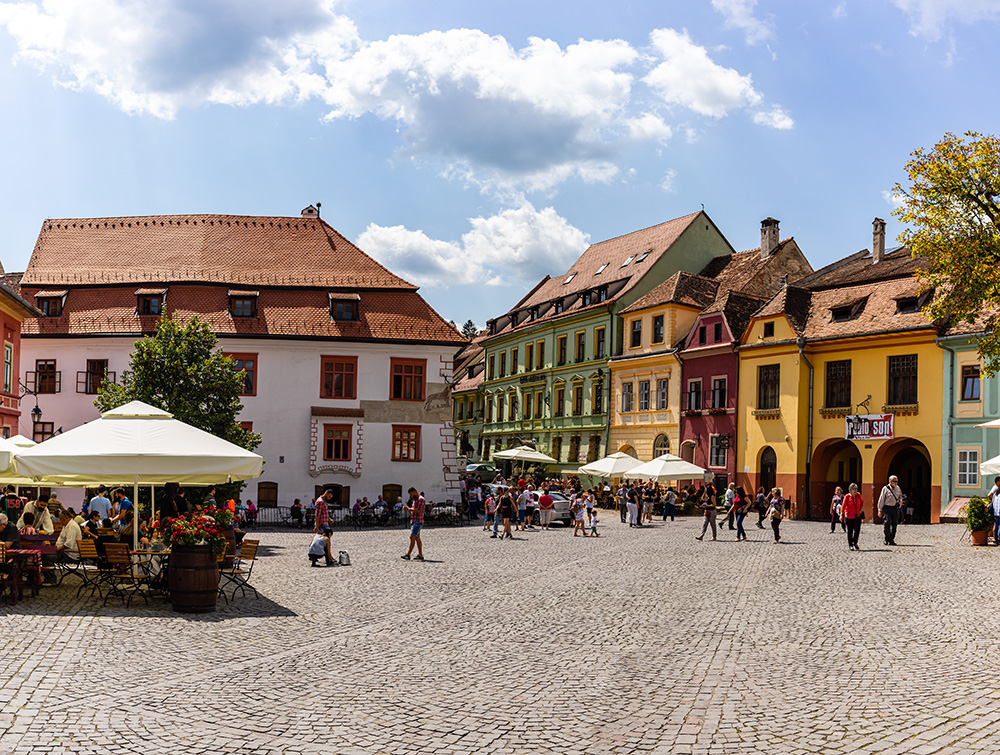 How long: at least 7 days for a circular route through central Romania
Best for: affordable accommodation and car rentals make this perfect for budget travelers
Tip: take care on provincial roads where speeding and overtaking are very common

Spain’s southern region of Andalucia is arguably most famous for its stunning historical cities, such as Seville, Córdoba, and Granada. Thanks to Spain’s efficient rail network, you can easily see these on a city-hopping trip. But… that also means missing everything between these cities!

The Andalucian countryside features slews of preposterously photogenic whitewashed towns, often sited on dramatic hilltops. Thanks to easy-to-drive roads you can explore at a relaxed pace, optionally bookending your trip with visits to Seville and Granada. 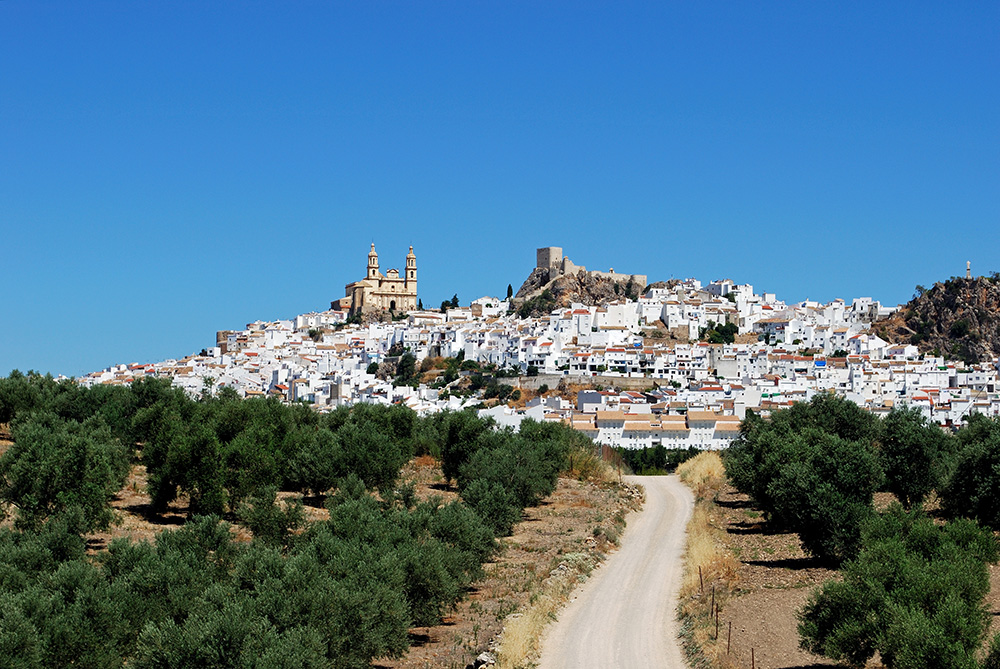 While living in Andalucia I went on many road trips and was amazed by how much there was to discover. I couldn’t get enough of all the pretty villages, hiking trails, and unique sites such as the Caminito del Rey (a jaw-droppingly narrow mountain path) and abandoned railway tracks turned into hiking and cycling trails. Keep an eye on the sky, as you can sometimes spot numerous eagles and vultures flying overhead.

Southern Spain is known as a summer destination, but I recommend road-tripping there in spring or autumn, when the temperatures are milder and nature is at its best. Andalucia’s pueblas blancas and national parks are often overlooked by the masses, so a road trip through this region is bound to be a special experience.

You can take a look at my guide to the white towns of Andalucia for a lot more inspiration.

How long: at least 7-10 days for Seville to Granada with several stops in between
Best for: historic cities, delightful villages, peaceful hikes
Tip: car rentals can get pricey — be sure to book early

Blessed with a coastline stretching over 500km (300 miles), Croatia is simply made for a coastal road trip. Start in the capital Zagreb, then take a tunnel through the Velebit mountain range, emerging on the shimmering Adriatic coast dotted with small islands.

You can include typical highlights of Croatia such as the cities of Split and Zadar, but also visit small scenic towns like Omiš or Šibenik. Bridges and ferries can take you to some of the Adriatic islands, like the delightfully vowel-less Krk. A bit further inland, you shouldn’t miss the gorgeous waterfalls of Plitvice. 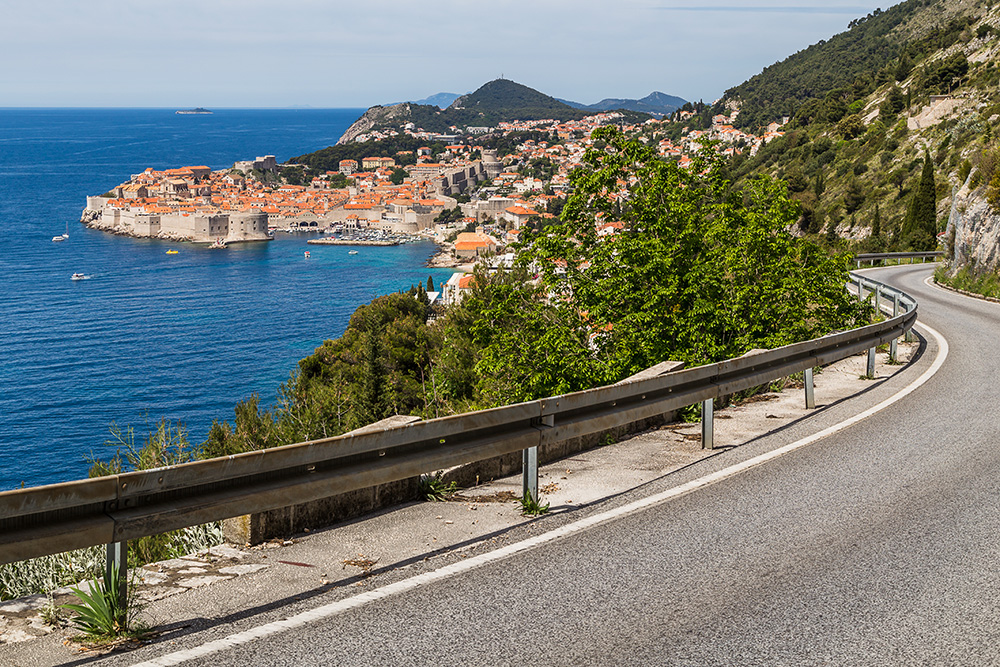 The route gets increasingly scenic as you approach Dubrovnik: the Adriatic Highway narrows considerably, briefly poking through Bosnia-Herzegovina before arriving at the historic city. Enjoy panoramic views of the glittering sea all the way.

I road-tripped from Zagreb to Dubrovnik and back in 7 days, but with a few more days you can stretch further to the Bay of Kotor in Montenegro, adding an epic finale to your trip.

How long: at least 7 days for the Croatian coast, 10-14 days to include Montenegro or more stops
Best for: combining beaches & islands with historical towns
Tip: coastal Croatia can be pretty dead in winter — it gets more lively from mid-April onwards

Think Greece is only about island hopping? Then think again! Mainland Greece is secretly an amazing road trip destination.

The Peloponnese region lets you truly dive into Greece’s deep history, while also enjoying its many beaches and charming seaside towns. 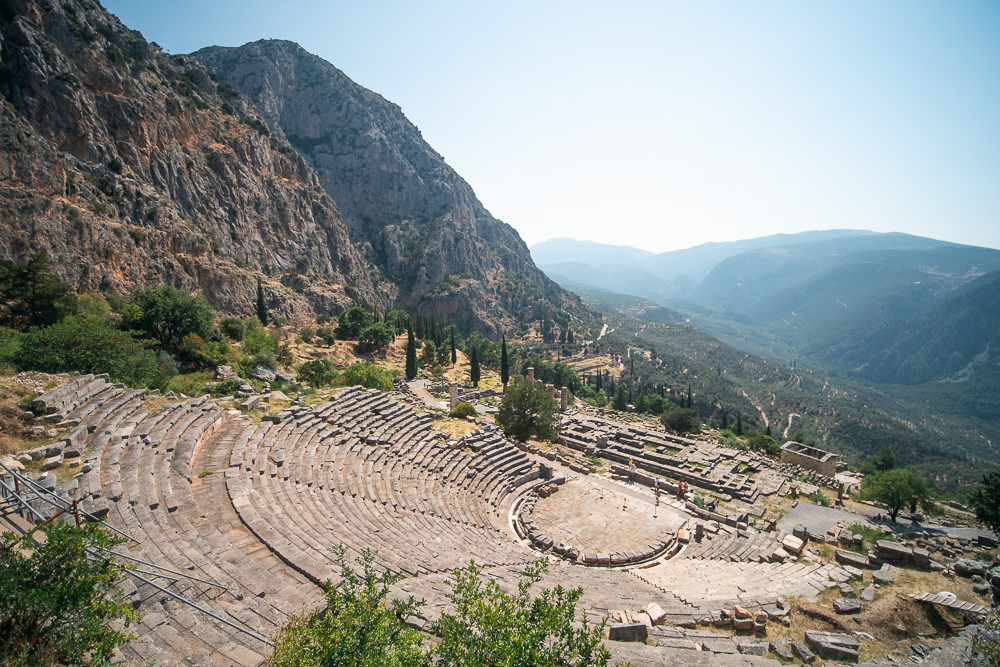 From Athens you can make your way to the archeological sites at Corinth, Sparta, Olympus, and Delphi. But also don’t miss Mycenae, where you can see the 12th century BC ruins of the advanced civilization that came before the ancient Greeks. Not to mention the impressive Byzantine fortified city of Mystras, which is no less fascinating than the ancient Greek sites as well

Need to cool down from all that history? Then simply chill on the coast in such towns as Nafplion, Monemvasia, Gytheio, or Methoni. The beaches are just as great as on the islands, blessed with perfectly calm and warm waters. What I also enjoyed about the beaches in the Peloponnese is that you’re almost always facing another peninsula, adding beautiful mountain backdrops to every sunset.

I should mention that in Athens the traffic gets pretty wild and drivers might do some pretty crazy maneuvers without using any indicators. Luckily, the driving within the Peloponnese is far more relaxed. 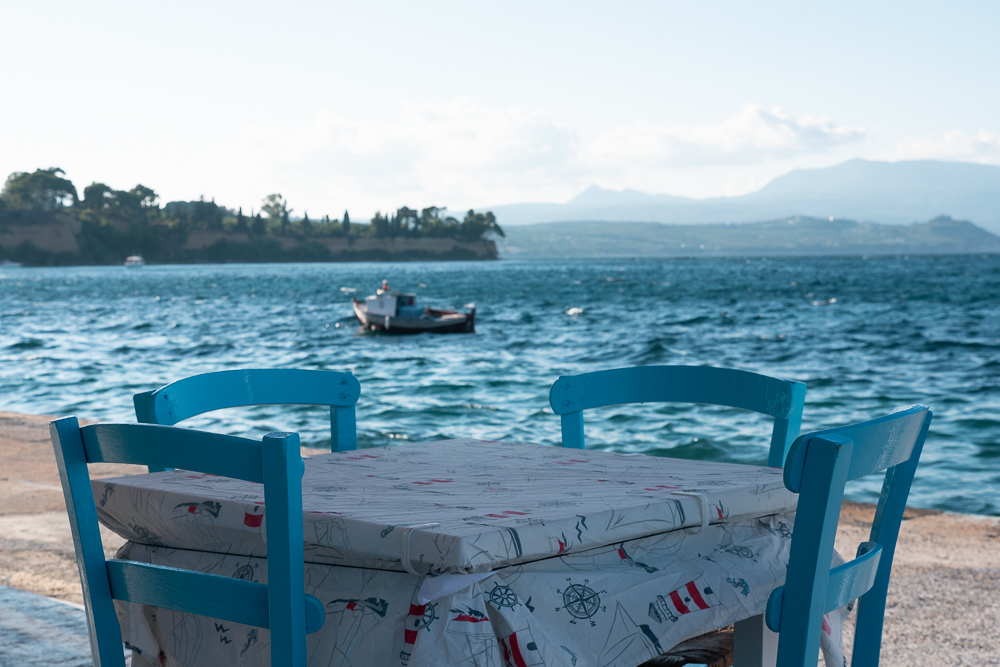 How long: at least 2 weeks for a loop around the whole Peloponnese (ideally 3 weeks to truly see it all or to add Zakynthos island)
Best for: history buffs who also love beaches and scenic roads
Tip: avoid August if possible as it can be scorchingly hot (and hotels can cost 3X more!); ideal months are June, July, and September.

This classic road trip route takes you through three different countries, giving you loads of variety in one trip, while tracing Moorish history through Iberia into the Maghreb.

Start in Lisbon, driving down the utterly unspoiled Portuguese Vicentine coast, then on to the Spanish city of Seville. From there, drive down to the port town of Algeciras, where you can take a ferry to Tangier in Morocco. A return ticket costs about €200, though it will depend on the size of your car. 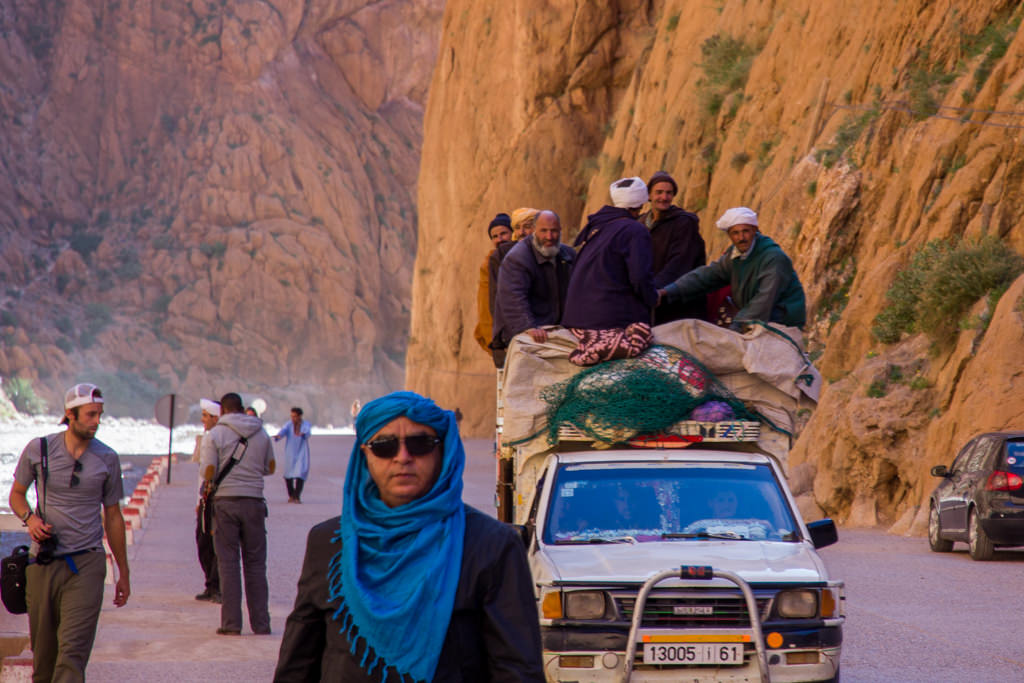 Once in Morocco, the mountain town of Chefchaouen (which is famed for its blue houses) makes for an interesting stop, as does the city of Fez with its bedazzlingly maze-like market streets.

This is the perfect trip if you want to travel in Europe with a dash of something more exotic.

How long: at least 7-10 days
Tip: Don’t let corrupt police scam you in Morocco. Be sure to read up on their tactics before driving there. If you’re driving by rental car, make sure it’s authorized to cross the Gibraltar strait.

You’re truly spoiled for choice when it comes to road trip routes in Italy, so let me mention two amazing options.

One of the most famous routes follows the Amalfi Coast, which is a little south of Naples. I must say, the narrow cliffside coastal road here is stunning, and Amalfi town is one of the most scenic and romantic places I’ve been. It’s one of those parts of Italy that everyone should see at least once in their life.

That said, the road from Sorrento to Salerno takes just 2 hours to drive, so it’s hardly a long road trip. If you’re looking to explore a wider region, I can highly recommend Puglia, which remains a little off the beaten track. The ‘heel of the boot’ of Italy is filled with charming historic towns and unspoiled beaches.

How long: 3-5 days for Amalfi Coast, 7-10 days for Puglia
Tip: Italians are known to be pretty crazy drivers! Always expect the unexpected. However, the driving is more relaxed in the countryside than in the cities.

Most tourists in Portugal visit the cities of Porto and Lisbon, completely missing one of the best features of this country: the coastline!

In fact, Portugal has three main coasts. The Silver Coast is a surfing mecca, with numerous surf schools concentrated especially around Peniche. This town makes for a great stop even if you’re not a surfer; consider making a trip to the nearby protected Berlengas Islands, where you can hike and stay at an ancient fort. Or stop by Óbidos, a picturesque Medieval town. 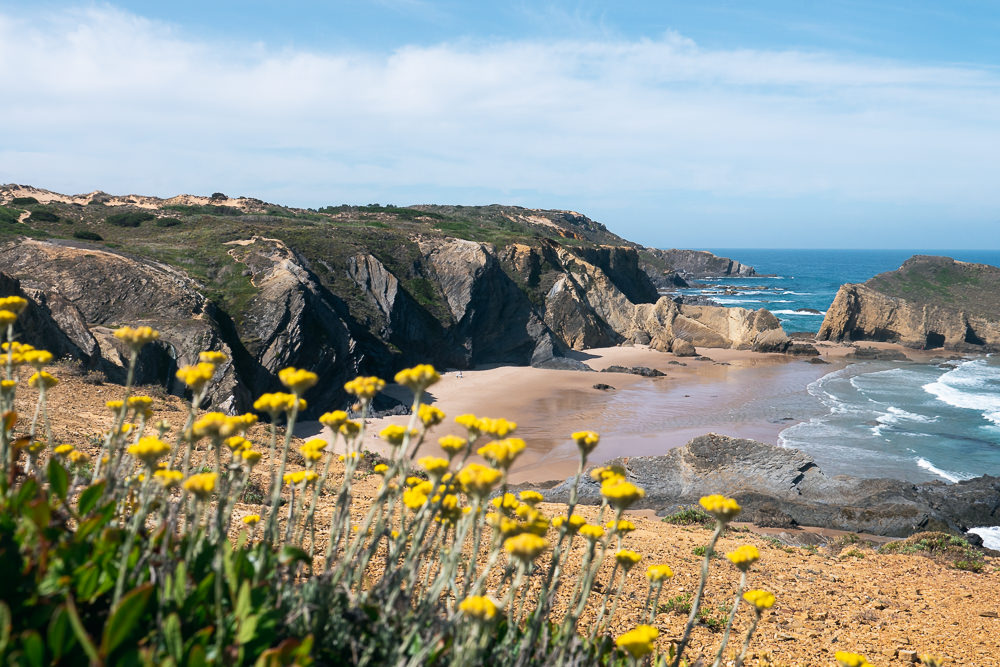 The Costa Vicentina in the Alentejo is easily my favorite bit of the Portuguese coast. It’s very raw and pure, free from any commercial tourist development. You can chill at beaches with gnarly cliffs and visit small seaside towns where you can gorge on traditional Portuguese food. It’s a popular coast for those traveling by car or by van through Portugal.

Finally, there is the Algarve, which thanks to its warmer waters has developed into more of a holiday resort area, though its many campsites and parking spaces for vans make this a great place to road-trip through as well. Don’t miss the epic cliffs and seaside caves near Carvoeiro.

How long: 7-14 days depending on your pace
Tip: Portugal has many toll roads, but they are easy to avoid (and the secondary coastal roads are more fun!) 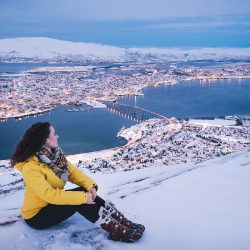 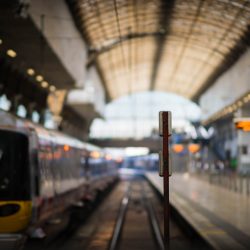 Best Ways To Get Around Europe (Bus, Train, Car & More)