5 Reasons Why I Utterly Loved Traveling In Romania 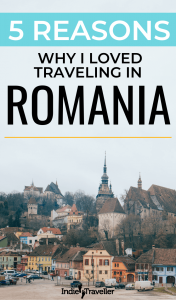 I recently went on a road trip through Transylvania, the northwestern region of Romania. While I visited just this part of Romania, it gave me a great impression of the country. If you’ve not heard much about it, you might wonder if Romania is worth visiting. 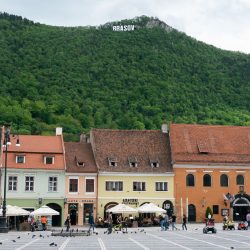 Among European travel destinations, Romania still seems to be quite overlooked. Some people wonder if it’s safe to go or if Romania is worth visiting at all. But let me tell you: if it isn’t on your travel list, it absolutely needs to be!

Here are just a few reasons why I loved traveling in Romania.

I thought I knew pretty well what to expect of Romania. I pictured a deeply melancholic country: one with sad farmers with calloused hands plowing the fields, or with endless dreary communist-era buildings stacked like dominoes along cracked concrete roads.

Well, guess what? That’s not quite what I saw — or at least, it made up just a little part of a bigger picture.

It might seem silly to mention, but until you’ve actually visited you’re often still relying on stereotypical images, and I think in northern Europe these are probably the first and only images that pop up. 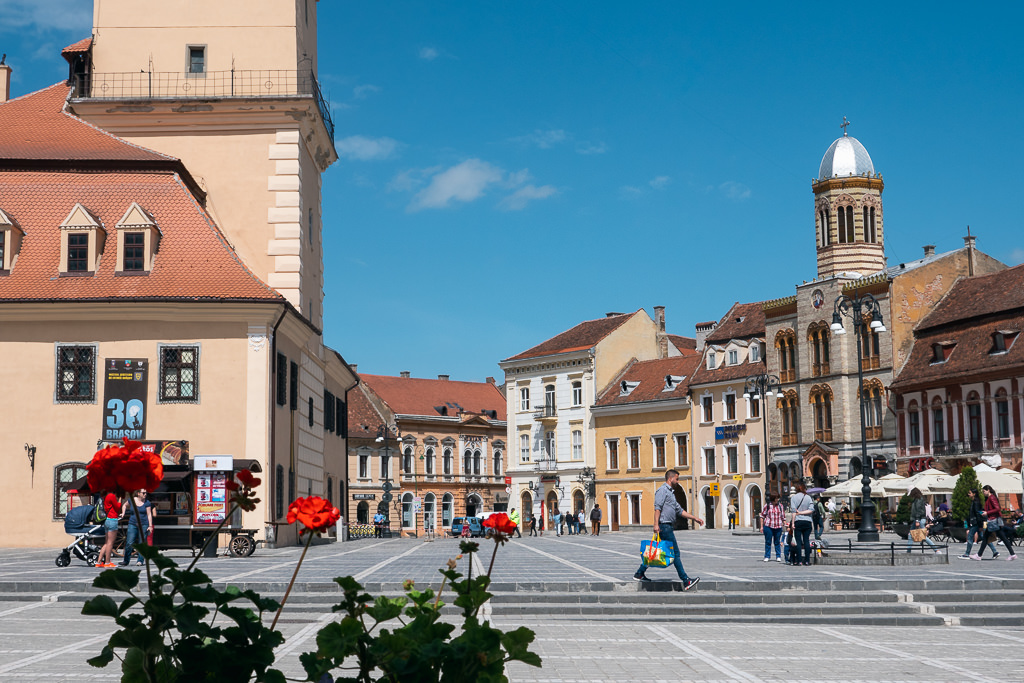 If things had been all gloomy and gray in that older Eastern European sort of way, that would have certainly been interesting. But I didn’t expect Romania to be also so full of vibrant colors, beautiful castles, hip cafes and restaurants, and so much charm.

As I strolled the cobblestone streets of historical Brașov — with its medieval architecture and cute little alleys backed by lush green hills — I felt like I had discovered one of Europe’s secret travel spots.

2. It’s a crazy patchwork of history

It’s fascinating how today’s modern borders, especially in Europe, often hide so many deep and complex histories. Crack open another country and, sure enough, loads of cultural influences and hidden historical connections come bursting right out.

Such is the case with Romania; dig just a little bit into its history, and you soon realize that the modern country of Romania has so many deeper historical layers behind it.

What’s particularly interesting is that Romania is essentially a country of two halves, split along the Carpathian Mountain range that runs more or less through the middle. Wallachia is in the southeast, while Transylvania is in the northwest.

(This is a simplification; there is also the Moldova region in the northeast for example, which joined with Wallachia in 1862.) 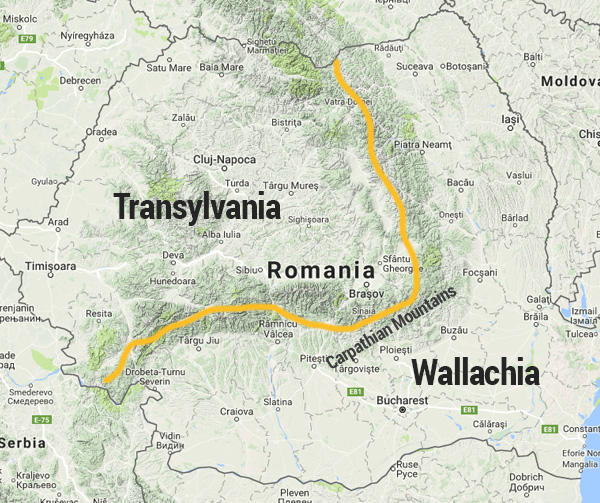 Protected by the towering snow-capped Carpathian peaks, Transylvania found itself on a natural border that once held the Ottoman Empire at bay. It’s because of the Ottoman threat that loads of the mountain passes and valleys became home to beautiful castles and fortified churches.

The region also developed a distinct culture thanks to many Hungarian and Saxon (German) influences. As you explore the region you’ll even notice that some towns still have two different names, one being Hungarian from the times they were a part of the Austro-Hungarian Empire.

The name Romania itself can be traced back even further to — you guessed it — the Romans. Even though the people in these parts weren’t precisely Romans, they decided to assume their name sometime in the Middle Ages.

The Romanian language, by the way, is very much Romanic and not at all Slavic. So, if you know let’s say some Spanish or Italian, you will be able to figure out a fair bit of Romanian. 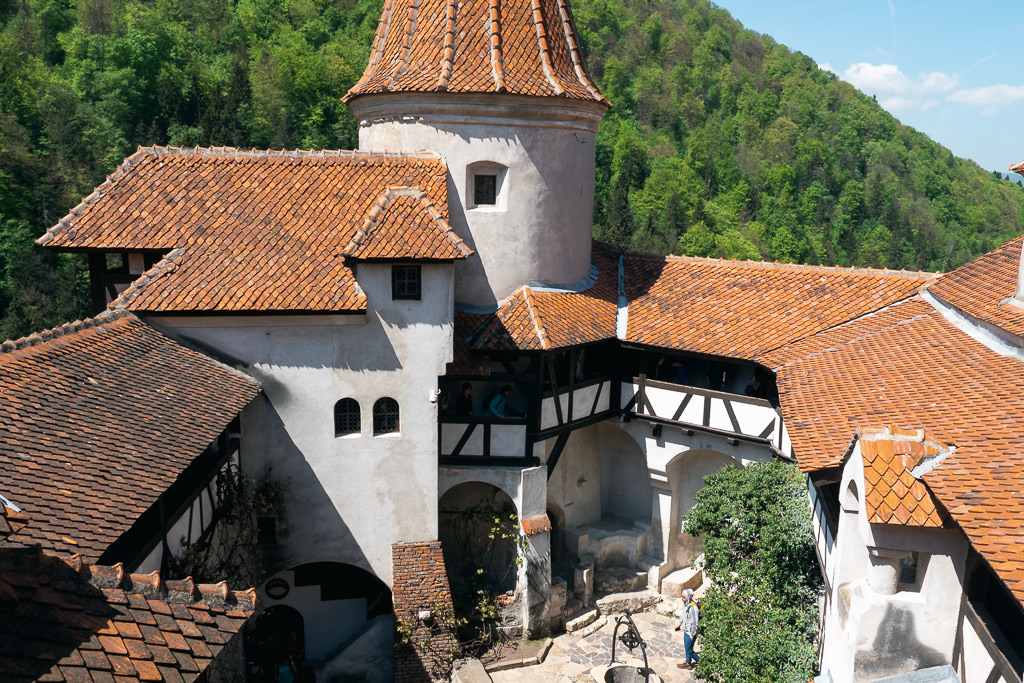 As a Dutchman, I was also intrigued to learn that the Romanian currency, the Leu, has a connection to the Netherlands. Leu means lion, which refers to the Dutch leeuwendaalder (lion thaler) coin that merchants once used in the Middle Ages. Romania minted their own copies of Dutch coins, which is just another example of those deep connections running through the continent.

When visiting Romania, you’ll surely find many angles from which to learn its rich and storied past — and how it’s intertwined with so much of other European history.

3. The food is fantastic

Romanian food is delicious and somewhat of a reflection of its history as well, as it includes plenty of Hungarian, Austrian, German and even Greek and Turkish influences.

(When I mentioned some of my favorite dishes to Romanian friends, they kept saying those were from somewhere else… but let’s just say I really like the Romanian versions of whatever they borrowed from other cuisines!) 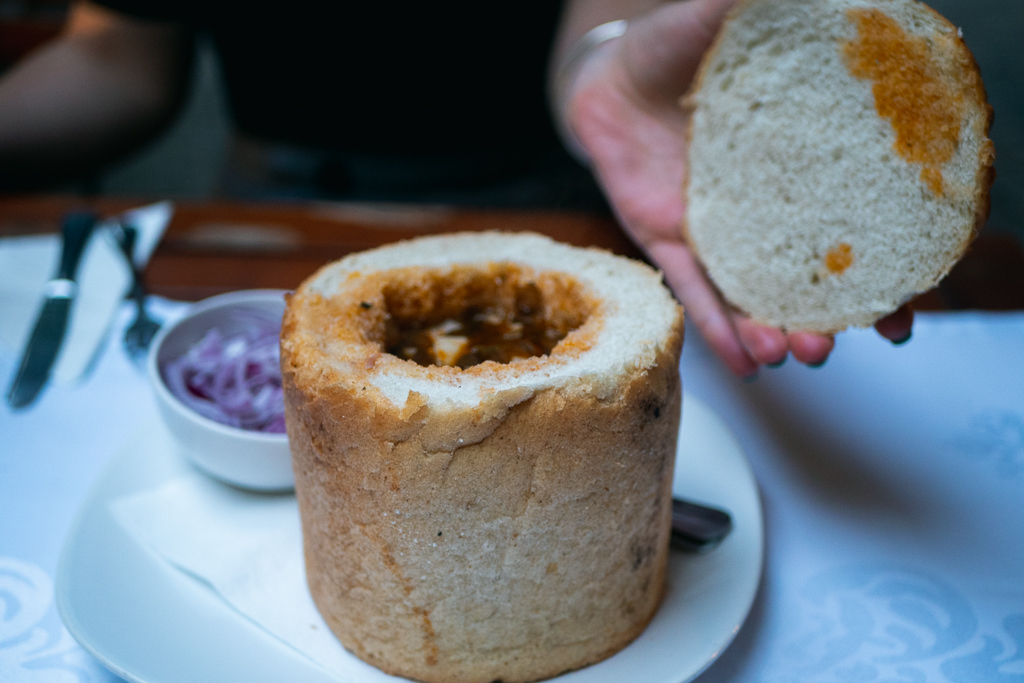 The cuisine is, for the most part, pretty hearty and chunky, with much gastronomic devotion focused on things like pork, tripe, cabbage, and so on. Make sure you arrive on an empty stomach as many dishes are served with big sides of polenta and cheese.

I became an instant fan of Sarmale, minced meat with rice wrapped in pickled cabbage leaves. Ciorba de Fasole is another curiosity, a bean soup that’s served in a bowl made of bread. I’m guessing the original idea was to eat the soup and then eat the soup-soaked bread, but in its modern form the bread is just a (perhaps somewhat wasteful) bread-based receptacle. It’s a fun thing to order at least once. 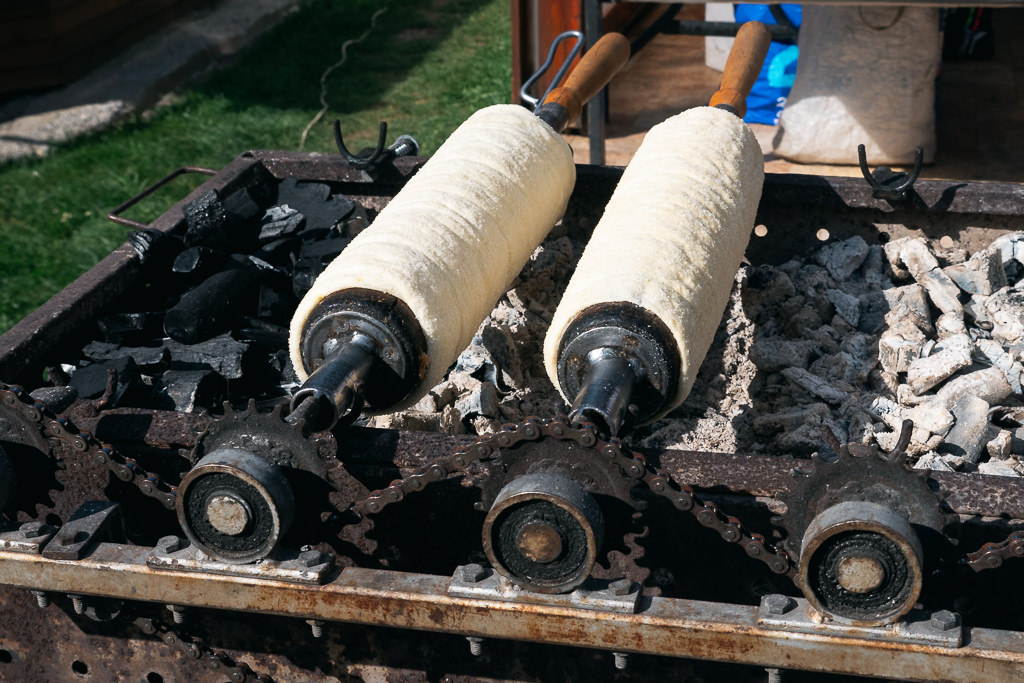 Romania has some great sweets as well! I loved snacking on Kürtőskalács, a sort of coiled snake-like sugar bread.

Despite rapid growth in recent years, Romania still lags far behind the rest of the EU economically. That can be bad news for Romanians; in Brașov I spoke with a young barista on his cigarette break bemoaning the country’s 200 Euro a month minimum wage. His dream was to emigrate to Canada — not to pursue some illustrious new career, but simply to be a barista in Canada. He’s not the only one with such aspirations; more than 3 million Romanians left their country in the last 10 years.

On the flip side, Romania’s poor economy does make it a comparatively cheap travel destination.

As a backpacker, you can probably get by on about $30 to $40 a day. I traveled more in flashpacker style on this particular trip, staying in some charming Airbnbs (usually 20 to 30 Euro a night) and dining in mid-range restaurants (typically 10 to 15 Euro including wine). 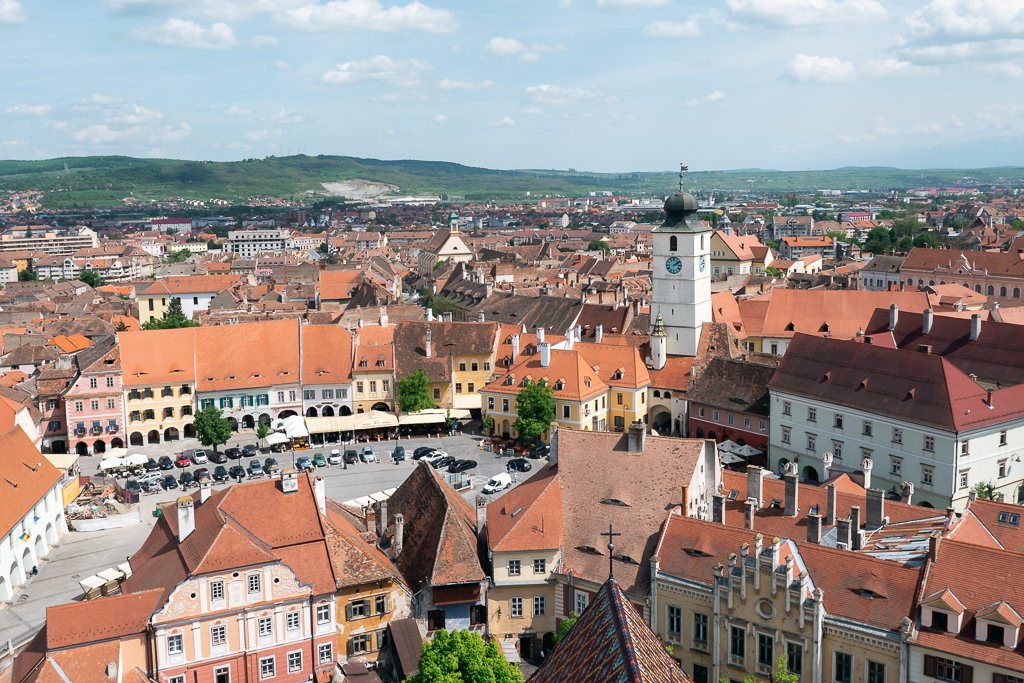 Regardless of your travel style, Romania is going to be great value for money. Even in a somewhat fancy restaurant, I struggled to spend more than about 20 Euro a person, which is very little compared to elsewhere in Europe.

From the moment I saw the distant white peaks of the Carpathian mountains from the church towers in Sibiu, I knew Romania’s landscapes wouldn’t disappoint.

Romania has some of the wildest nature in Europe, including one of the biggest remaining brown bear populations. While I visited Romania on a road trip and so didn’t get to do much hiking, the passing landscapes were constantly catching my eye — especially when driving through the epic Bicaz Gorge in the northeast of Transylvania.

I quickly concluded that I need to come back to Romania another time, to see the other parts of the country such as Bucharest and the coast, but also to do some great hikes through its truly wild forests and mountains. 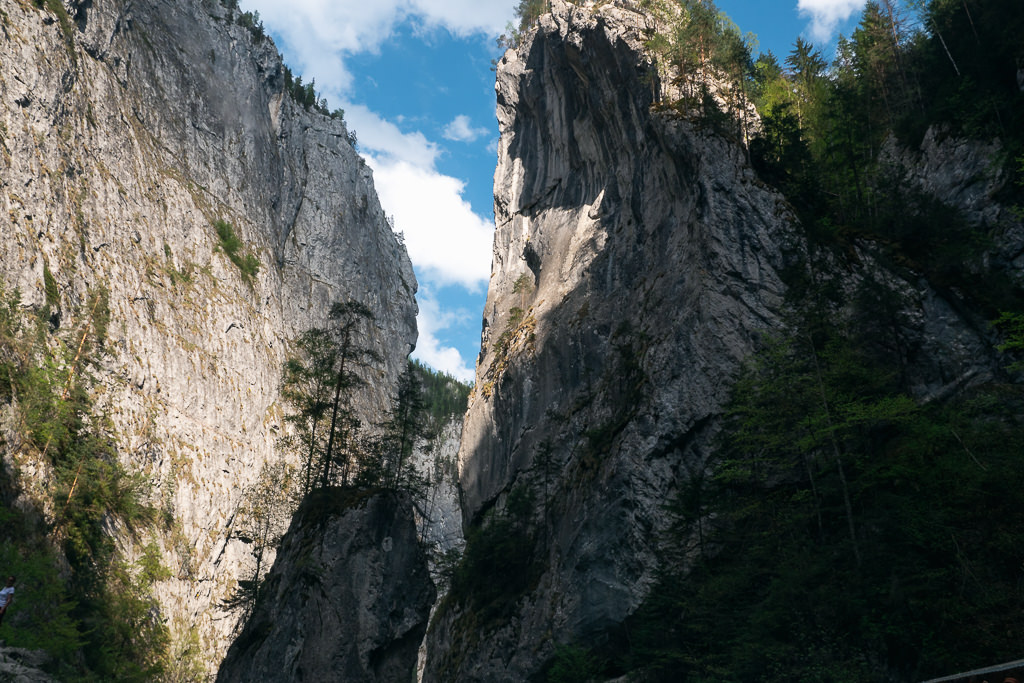 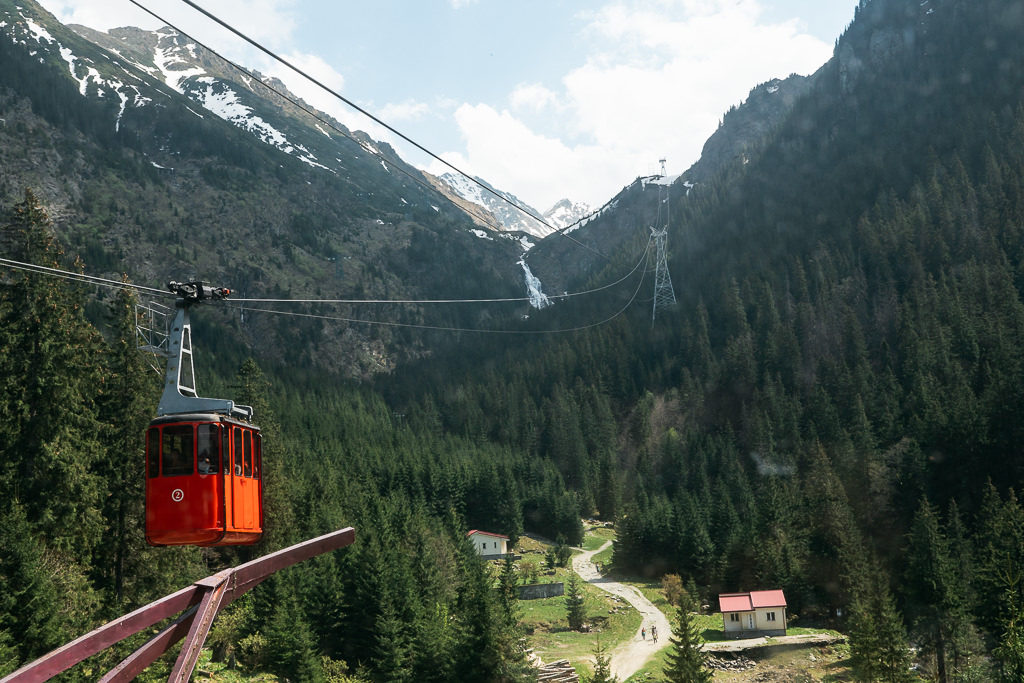 What was clear for my trip is that Romania is a far more varied destination than I may have assumed. It instantly slung its way to the top of my personal list of favorite European destinations.

And yes, Romania is very welcoming and safe country!

This oddly enough doesn’t go without saying, as many people seem to think Romania is somehow unsafe. I noticed this when I told some people I’d be going to Romania, their reactions often betraying certain preconceptions. Honestly, I bet you’re more likely to get robbed in Paris than in Romania, and my sense was that there are no unusual safety concerns in this country.

In fact, Romania simply struck me as peachy and wonderful, and I implore you to go and see this beautiful country for yourself!