How Laos Turned From Party Hotspot To Ecotourism

For better or worse, Laos' reputation as a backpacker party hotspot is no longer deserved 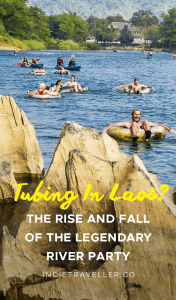 Poor Laos. It’s such an underrated country, often overlooked or sometimes even skipped on the Southeast Asia travel trail just because it’s misunderstood.

Laos acquired a certain reputation during the late 2000s as a super wild party place. This is no longer true, but those looking for a more ‘authentic’ experience still skip Laos based on what they heard many years ago.

I was messaging with a reader planning a trip in Southeast Asia who asked for my advice. She said she’s heard that Laos is just for young rowdy European backpackers to go partying and tubing and drinking non-stop. Since she was more interested in culture, cuisine, and nature, she’d decided to skip Laos entirely.

It pains me when people avoid Laos for the wrong reasons!

One of the things to know about Laos is that it’s a wonderfully pure travel destination. And it’s much less of a party place than Thailand, Vietnam, or Cambodia.

Not that there’s something wrong with partying, but if that’s what you’re after, you may find Laos extremely tame these days.

I visited Laos back in 2012 when it was known as a party hotspot, particularly in the town of Vang Vieng. Recently, I had a chance to re-visit the country. While I’d gotten a few years older, I got to see Laos in a different light.

I first travelled in Laos in 2012 as part of my first backpacking trip through Southeast Asia, following the popular Luang Prabang to Vientiane route.

This was all the way at the start of my life as a traveler — and I had gone to Laos pretty much on a whim. When I arrived in the town of Vang Vieng, I was completely oblivious to its reputation.

It turned out Vang Vieng was a pretty notorious party town!

In fact, Vang Vieng was known for having some of the most outrageous backpacker parties on Earth.

You could drink booze from buckets and binge on drugs like there was no tomorrow. Backpackers arrived in droves to Vang Vieng’s 24/7 riverside parties, where drunken revelers would pull off acrobatic feats like jumping off bamboo bridges, rope swings, and improvised water slides.

While that could sound like a whole bag of fun, keep in mind that this is a poor country with little regulation, so things quickly got out of hand.

It got crazy. Too crazy. People were dying.

If you thought Fyre Festival was a real clusterf**k, then it’s nothing compared to Vang Vieng, even though things devolved in more of a slow-motion.

Every month, more and more backpackers drowned or crashed themselves onto the rocks. The nightmare came to a head when 27 tourists died in 2011. Western newspapers started writing about Vang Vieng, setting perceptions of Laos for years to come.

But when I arrived in Vang Vieng in November 2012, it was already two months after the parties had been totally shut down. A few bars in the town itself were still open, but the river parties were gone.

I heard a few different rumors around town. Apparently, the son of an Australian diplomat had died while partying here, so Australia had threatened to pull development aid if Laos didn’t crack down on the parties immediately. Someone else told me the Laos military had arrived one day with helicopters, torching down all the riverside bars using flamethrowers.

I don’t know which stories were true, but the fact was that the old Vang Vieng was done.

I wasn’t sad to have missed it.

But, to be clear, I did party in Laos and had a great time!

I was there in my 20’s and not wholly disinterested in having some mindless fun. I was with a group of awesome people I’d met by chance on the trail and many of our evenings were spent drinking and going out.

When all of Luang Prabang would shut down around midnight, we would migrate en-masse to a bowling alley outside of town run by the communist government that still served cheap local rice whiskey.

In Vang Vieng, we ended up drinking and playing pool at the Irish bar pretty much every night. At one point, a friend and I somehow crashed a local wedding where we danced in a big circle with the locals.

But even then, I’d never have thought of Laos as a ‘party destination’. Most towns officially have a midnight curfew, and there weren’t any backpacker party districts like you might find in Bangkok or Ho Chi Minh City. It was and is, for the most part, a very chilled out country.

Getting to know Laos better

Maybe it’s just a matter of age and perspective, but I went back to Laos last year and got to know it so much better the second time around.

Back in 2012, I did see plenty of caves, temples, night markets, and beautiful landscapes — but my time was also often spent drinking and socializing. Back then, I wasn’t yet Mr. Serious Travel Man; my main goal was to just forget about my career woes and have a good time.

But on my second trip, I was there just for Laos. And I was a bit more thoughtful in my exploration, veering off the standard Luang Prabang to Vientiane backpacker trail.

I stayed in the trekking hub of Luang Namtha and in the zen-inducingly beautiful village of Nong Khiaw, which is surrounded on all sides by gorgeous limestone mountains. There I met a guy who volunteered at some of the remote villages, who invited me to come along to a homestay in a place unmarked on any maps, drinking rice wine with the village chief.

I stayed at the long-running Gibbon Experience ecotourism project, sleeping above the jungle canopy and waking up to glorious vistas of a misty rainforest.

In the south of Laos, I rented a motorbike and went road-tripping for several days, passing by traditional villages, gorgeous waterfalls, and an ancient Khmer temple that — unlike some of those in Cambodia — was utterly tranquil and nearly devoid of tourists.

I was completely charmed by Laos again.

I had liked its rural vibe the first time around, but now I was utterly in love with it. And I realized Laos may just be one of the purest and least spoiled out of all the mainland Southeast Asia countries.

Now, that doesn’t mean there isn’t any entertainment in Laos. 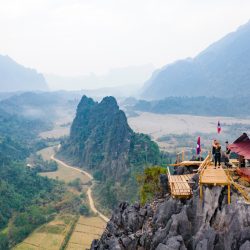 Vang Vieng resumed its river tubing a few years ago, letting you party by the river once again, just not quite in such crazy ways as before. Nowadays, Vang Vieng is increasingly known as an adventure travel hub, with many people coming there for outdoors activities like caving, kayaking, ziplining and hiking.

In the 4000 islands in southern Laos, the island of Don Det has plenty of backpacker bars with cheap booze, weed shakes, and happy pizzas — though all this closes down at 12 pm at the latest, and the 100-meter strip of bars is also easily avoided if it’s not your thing.

But when I think of Laos, truly the first things that come to my mind are its Buddhist calm, unspoiled nature, traditional culture, and beautiful landscapes. This was what defined Laos for me even back in 2012, and it’s what still defines it today.

So, if you’re planning a trip to Southeast Asia, I hope your ideas about Laos are not informed solely by some of the blog posts or newspaper articles you might find from 7 or 8 years ago. That’s not what it’s like at all.

Go to Laos. You won’t be disappointed.

See why Laos is so awesome... 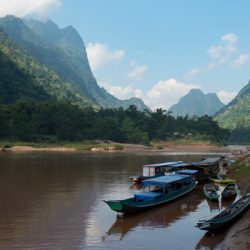 Backpacking Laos: Highlights & How To Plan

Flying Through the Trees Like a Monkey at the Gibbon Experience