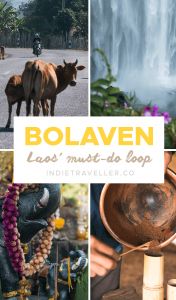 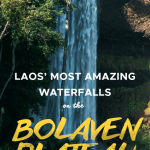 The Bolaven Plateau is one of the little-known highlights of southern Laos. It’s a region filled with tribal villages, traditional coffee farms, and some of Laos’ most spectacular waterfalls.

Given that it’s a plateau, you can expect to see a lot of flat land. But while the landscapes are not as mountainous as northern Laos, the cultural sights and stunning waterfalls still make exploring these parts extremely rewarding.

You can visit some of the sights as a day-trip from the city of Pakse, but the plateau is truly best explored by motorbike on a multi-day loop. I did what’s known as the big loop, which is a well-established yet still quite adventurous-feeling route that will give you a true taste of rural Laos.

Some of the waterfalls nearest to Pakse do have viewing platforms and ziplining set up around them, but the places further east seemed to have hardly any groups or organized tours going there (at least, when I visited in 2018). If you have at least 3 days to spare, it’s worth seeing this gentle off-the-beaten-track part of Laos.

The site Travelfish already did a great job explaining the big and small loops, and I recommend reading their excellent break-down. Here I’ll share my own experiences driving the full circle, plus my little side excursion to Wat Phou.

To state the obvious: the Bolaven Plateau is… well, a plateau. It’s also about 1000 to 1200m above sea level. That makes it a lot colder than the lower areas around the Mekong River.

On my visit in December it was, in fact, colder than a witches’ tit.

This was especially the case in the mornings or when strong winds blew across the expansive plateau. Having in mind only Laos’ tropical climate, I was wholly unprepared for the cold. I kept stopping at little roadside shops selling made-in-China goods — first to buy some gloves, then for an extra hoodie, then a rain jacket, then some elastic bands to close up my sleeves.

I thankfully had a bandana that I used as a scarf, but I wish I’d also brought a good windbreaker — not something I usually pack for Southeast Asia. Apparently, there was an unusual cold front in the region at the time that made it colder than normal, but either way I recommend packing some warm clothing for this trip. 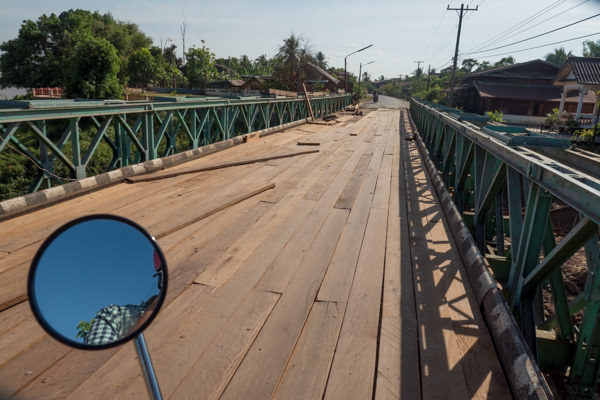 I had read a few things about the roads being bad. I suspect roadworks have improved things here in recent years, as nearly all the roads were actually fine. Some of the side-roads were dirt roads, but they were pretty even and easy to ride. The worst roads I encountered (in 2018) were in the southeastern section of the big loop, though this was nothing worse than just a few scattered potholes. 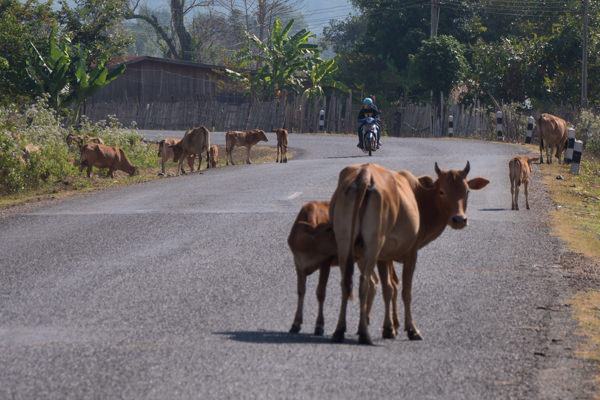 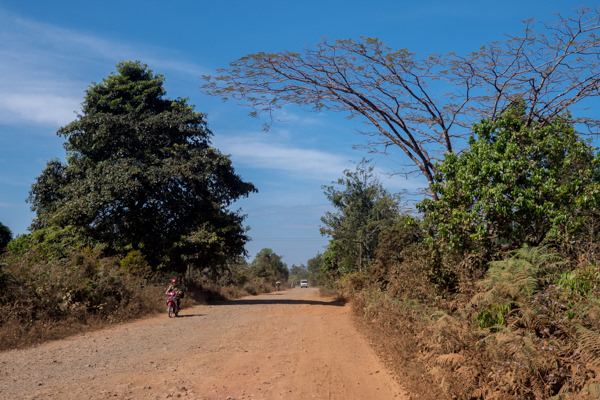 Still, you should know how to drive a motorbike before embarking on this journey. It’s wise not to drive too fast, but that’s not the only thing to keep in mind. Potholes can be treacherous! I once had to take a fellow traveler to the hospital after she fell off her bike while driving no more than 10 km/hr on a dirt road. Even though companies typically won’t check for a license, it’s clearly best if you know how to handle a scooter before attempting this loop.

You can easily rent motorbikes in Pakse, where there are plenty of rental companies to choose from. The Belgian/Laotian managed Miss Noy Motorbikes gives detailed daily English-language briefings on the Bolaven Loop. If you attend their presentation and take their photocopied map, then it’s of course only fair to rent a motorbike from them.

The minimum time needed is 2 days for the short loop. But if you have at least 3 days, I think it’s great to do the big loop, as it has some of the most beautiful waterfalls, some nicer scenery, and some great hiking trails as well. If I had only done the short loop, I probably would have come away only half as impressed.

Along the northern part of both loops, expect some of the landscapes to be a bit lacklustre at times. But the real reason to do this trip is for the many interesting stops along the way.

Okay, this is technically not part of the Bolaven motorbike loop.

But while you’re here anyway, you might as well add it to your itinerary. 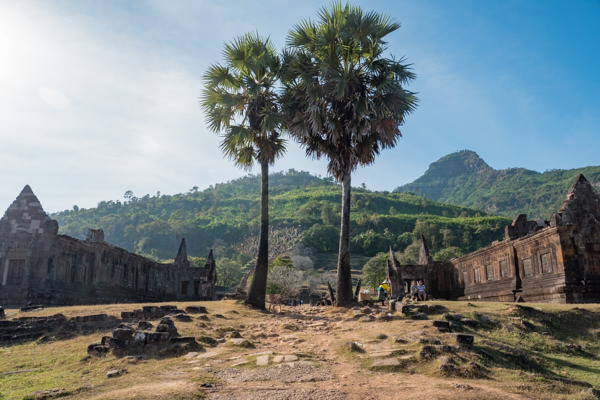 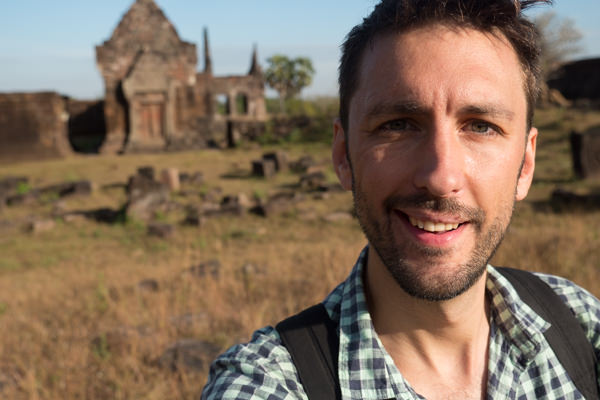 These small ruins might lack the grandeur of the sprawling complexes found in Thailand or Cambodia, but I think it’s a highly worthwhile excursion even if you’ve already seen your share of temples in Asia. It’s a wonderfully tranquil site with mostly just a few locals coming here to pray or to picnic (plus a few handfuls of tourists).

Climb the hill for some fantastic views! 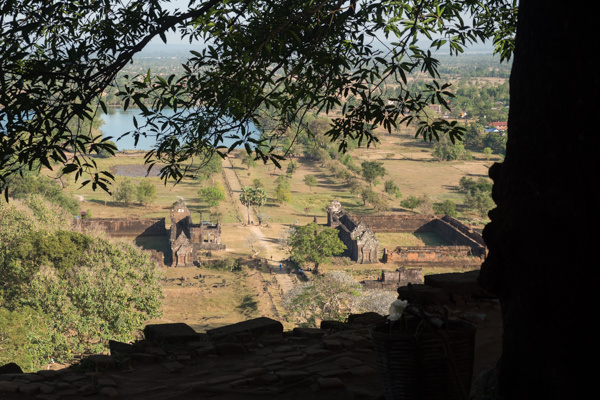 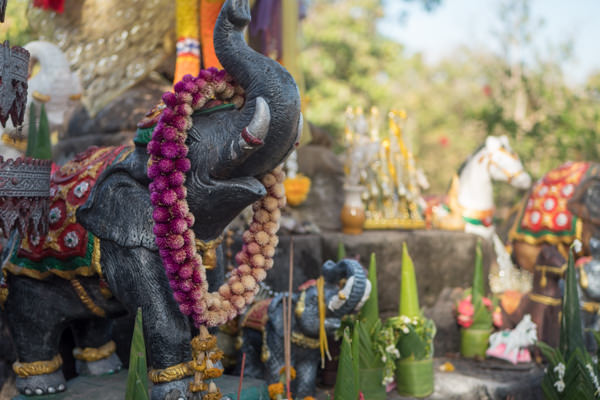 Tracing the Mekong River, you can slowly drive back north towards Pakse. It’s fun to cross the river to the other side on one of the rickety wooden ferries. Either stay the night in Pakse (as I did) or continue onwards to the start of the Bolaven Loop. 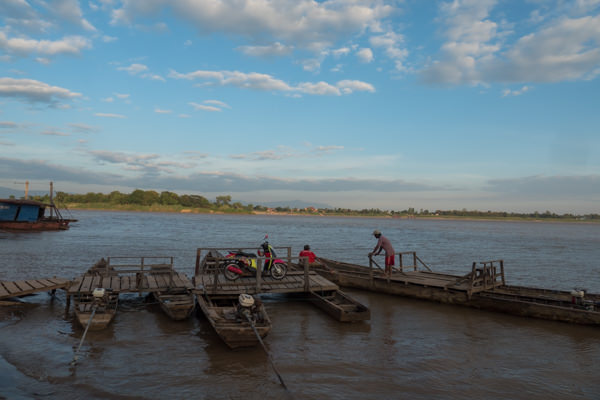 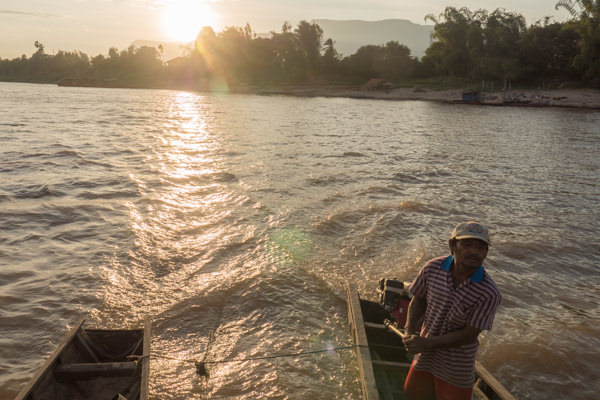 Uhhh, right. After the first few hours of driving, my initial enthusiasm fizzled out a bit. The road heading east from Pakse is very busy, very straight, and really quite dull. Heading north, it’s another few hours to Tad Lo on straight country roads through flat lands.

I had somehow pictured a much more scenic drive. But I soon discovered that it’s mostly the stops along the way, and not necessarily the road itself, that make this part of the trip so worthwhile. That said, you do get to drive through a nice bit of rural Laos. 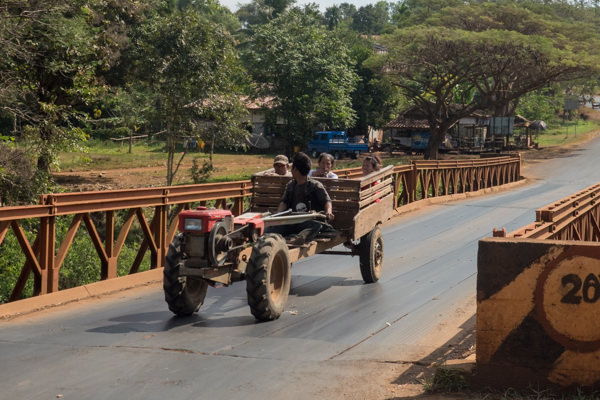 At the advice of my bike rental company I skipped the waterfall of Tad Champee and went straight to Tad Lo, a small set of waterfalls next to a peaceful village. There are some homestays, backpacker guesthouses, and cosy Laos restaurants here, and it’s a quiet place to stay.

Before sunset, I caught the daily bath of an elephant that lives at one of the lodges. 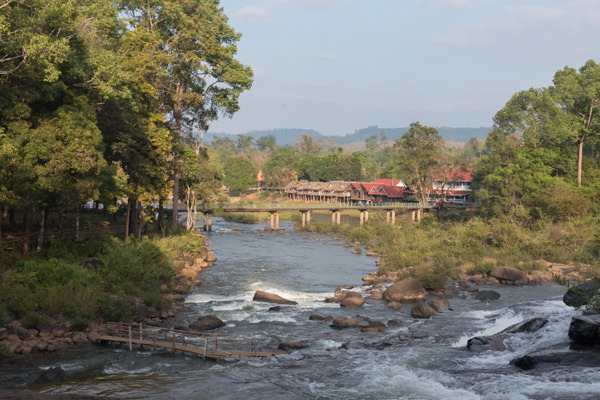 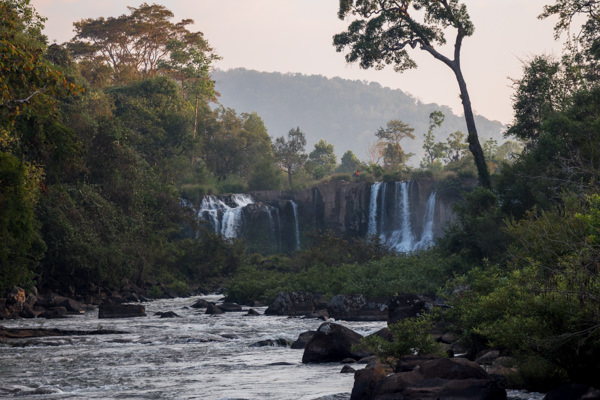 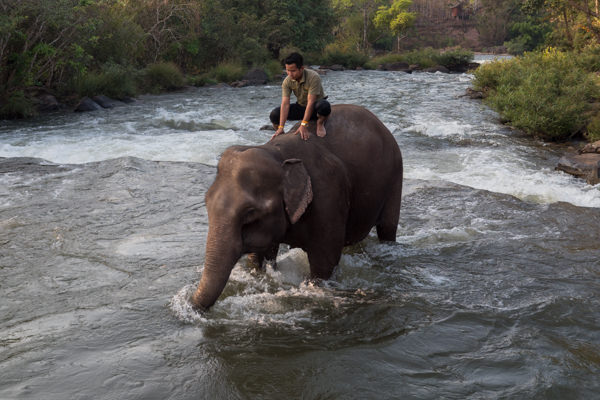 Near Tad Lo is also a traditional Katu village where you can meet Mr. Hook, a highly talkative local guide who takes small groups on impromptu tours.

I liked that the focus of this tour was mostly on the coffee farms and forest around the village, only stopping inside the village for a cup of coffee. This, for the most part, avoided the ‘human zoo’ effect that sometimes complicates this type of tour. Mr. Hook told me that the Laos government regularly visits to ensure the proceeds from the tours benefit the entire village. 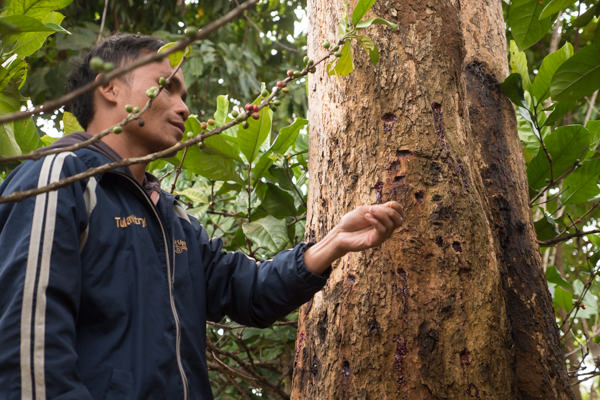 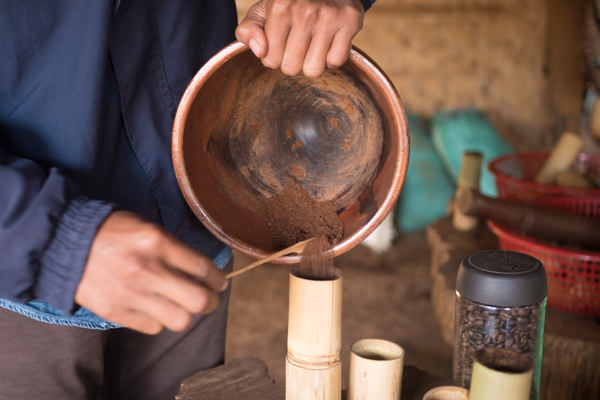 The village follows animist traditions and can be shockingly superstitious. One family thought to have brought ‘bad luck’ to the tribe was banished to the forest for ten years and their house burned to the ground. Most villagers are uneducated and believe the Earth is flat. According to our guide, they also regard all foreigners as French and believe people become white-skinned from a lack of work and only drinking milk. Given their limited context, such beliefs are understandable.

Apart from learning about the local beliefs and way of life, the tour also taught much about the coffee growing process and about various herbs and plants found in the area. I also tasted some live ants that were plucked from a tree, which had a wonderful lemony flavor and were very more-ish.

Every tour is different, and Mr. Hook is known to go on extended rambles about anything and everything. Some tours last 30 minutes, others apparently for hours (if you let him).

This was probably my favourite segment of the route.

Admittedly, this day did start with another 2 to 3 hours of driving through fairly mundane landscapes. But after the Tad Faek waterfalls, you start seeing more mountains and valleys, making things a lot more interesting. 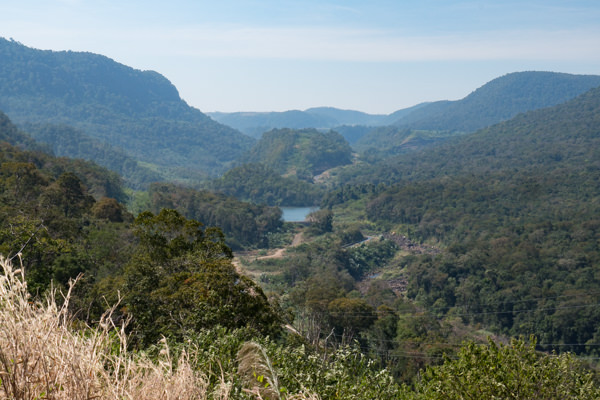 Tad Tayicsua was the most beautiful waterfall I saw on this trip, and possibly in all of Laos. Surrounded by lush vegetation and flowers, this waterfall produces a 360-degree rainbow when the sun hits it at the right angle.

You can eat or sleep at a guesthouse that’s a 10-minute climb up from here, then take your time to enjoy the waterfall in all its prismatic glory (which was hard to capture in photos!). 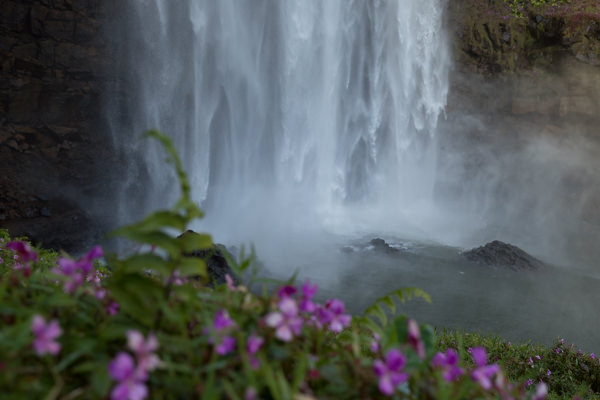 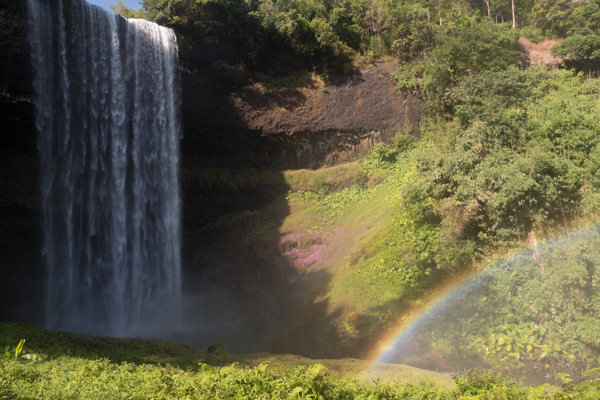 I was the only person staying here overnight, so it felt to me like the least-visited part of the loop, though that could have just been by chance. I can definitely recommend basing yourself around here, as there are walking trails leading to other nearby waterfalls, and the scenery is wonderfully lush and green.

It was not obvious to me at first that there were any trails here — a fact that seemed glossed over in the various information sources I’d used. If you enjoy a bit of jungle hiking, then it may be worth spending at least an afternoon here.

The final day was like a little bonus treat, as it passes several more waterfalls,  each impressive in their own way.

On my way through Paksong, I stopped at the Jhai Coffee House, a social enterprise investing all their profits into local projects including clean water solutions for villages and educating farmers on coffee growing practices. The cafe is super cosy and welcoming and makes for a perfect pit-stop.

Somehow I ended up geeking out about cryptocurrencies for an hour with another traveller who was also making a stop here — not the kind of conversation I had expected to have on a morning somewhere in Laos. 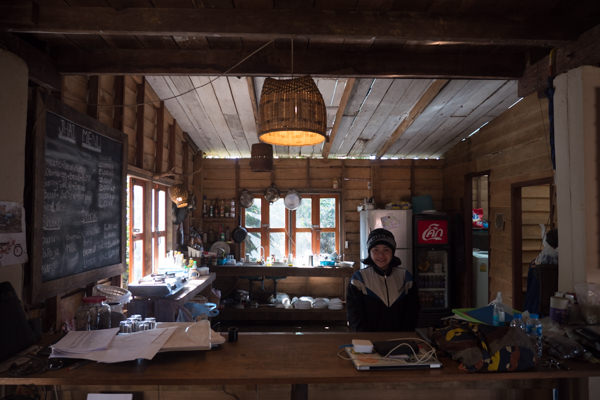 While the edenic Tad Tayicsua was my personal favourite waterfall, the award for most epic clearly goes to Tad Fane, which thunders down 100m into a huge jungle gorge. You can’t get as close to this waterfall as it’s viewed mainly from a platform on the opposite side of the ravine, but it’s most impressive from this angle anyway. 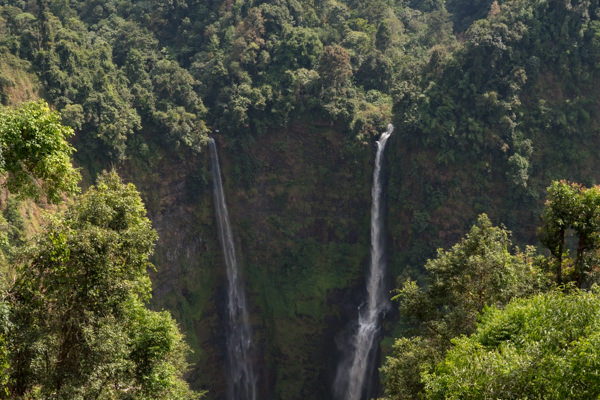 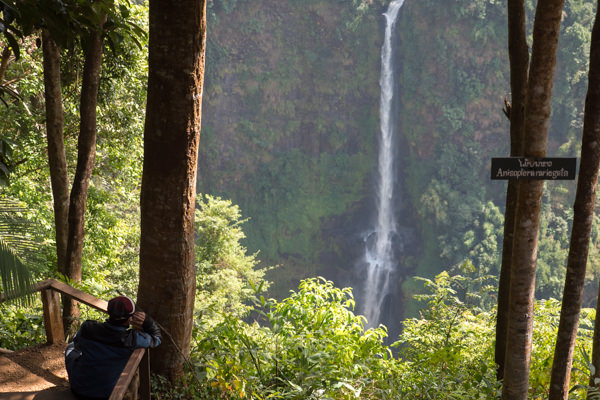 It’s a good idea to leave Tad Fane for Pakse by 4 pm to avoid driving at night. I got delayed a bit and drove the last 45 minutes at night and in rush hour, which was very tiring and stressful. I also got lost in Pakse without a map as my phone died. I ultimately had to persuade a Laotian family to let me charge my phone in their house so I could find the correct way back. Fortunately, I eventually did, and got to Miss Noy Motorbikes in time to return my motorbike and book my bus to the 4000 Islands.

To see most of the Bolaven Plateau, be prepared to drive for quite a few hours. If I had to do it again I’d maybe stay longer in Tad Tayicsua, and I would have made a stop at Mr Vieng’s cafe on the first day.

But all the stops I made along the way were well worth the effort, and looking back my time spent in the Bolaven Plateau was one of the real highlights of my second trip through Laos. 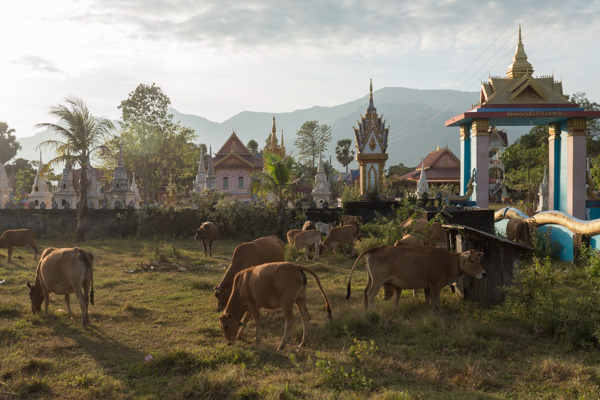 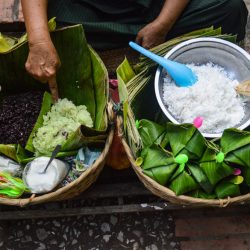 The Best Street Food in Laos 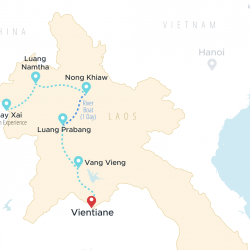