A drunk guide, an astronaut & an epic sunrise at Central America's highest peak

Last year, my travel buddy and I were in Guatemala during Christmas, in a place far from home, looking to do something epic. We set ourselves a challenge: to hike up the highest point of Central America, the Tajamulco volcano.

“It’sss all about the ffffucking money!”, our guide slurs as he wags his finger vaguely into my face, nearly tipping over a bottle of liquor in front of him. It’s the third consecutive time our guide has said this now, and I don’t entirely know where this is going.

I’m in a small semi-abandoned restaurant at the base of Tajamulco volcano in Guatemala—the highest point in Central America—along with my travel buddy and our Guatemalan guide Jose. He’s the only guide who would take us up Tajamulco on Christmas Eve, and now he’s drunk and ranting at us about the fucking money. 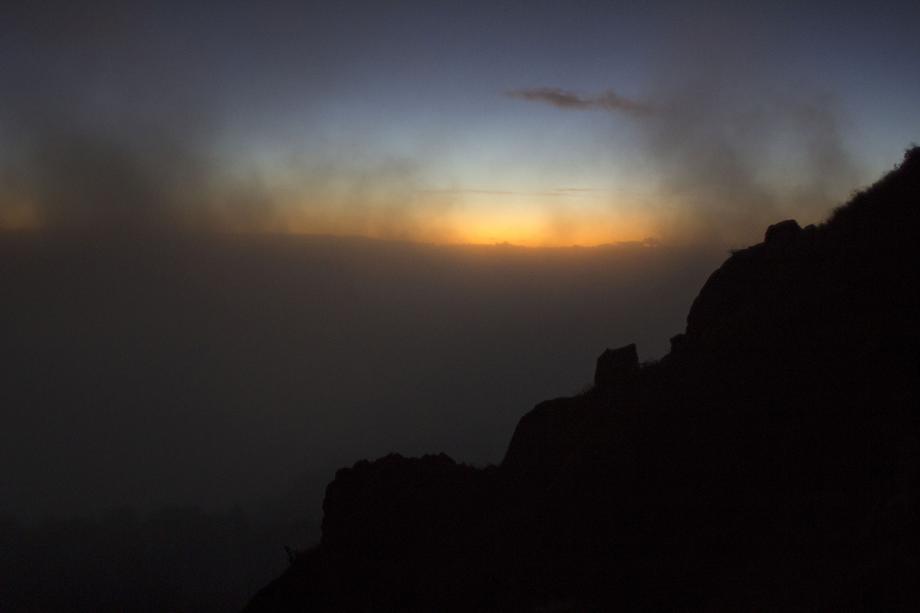 We are meant to start our mountain assault at 2 AM tonight to catch the sunrise at the summit, but it’s still only 8 PM. As there’s absolutely nothing else to do we’ve just been passing the time, mainly by drinking. This little empty restaurant is the last bit of civilisation before the volcano ascent itself begins. Although it gives us a roof above our heads it’s utterly freezing inside as there is no heating of any kind, not even a wood fire. We sit at a table packed into our thermal gear, rubbing our hands.

Our guide has just told us his life story. Before running a trekking company in Guatemala he spent ten years living in LA. Jose seemingly lived the high life: he emigrated to the States, made it big as a salesman and claims he was so successful that within a year he already owned several cars.

As he tells us his rags to riches story it quickly becomes clear he did not get there just by selling chocolate cookies. Jose admits to having done some “bad things”, things he regrets. What he did exactly is unclear.

“It’s all about the fucking money,” he sighs once more, looking dejectedly into his drink. 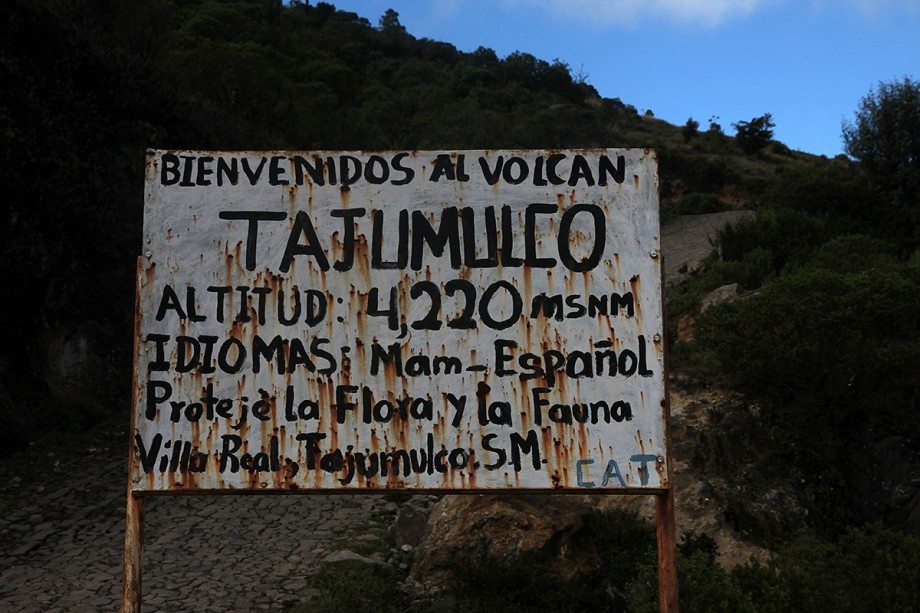 Jose tells us how he lost everything in America. He says his girlfriend left him and reported him to US immigration, which got him immediately deported. Having tried his luck and lost (through whatever means that may have been), Jose now tries to make a living guiding tourists up Tajamulco and other nearby volcanoes.

While I can’t help reminding myself that I’m probably talking to a character from The Wire (the more he tells us the more he sounds like he was probably part of a serious drug gang in LA), he also just seems like a nice guy pouring his heart out on a lonely christmas evening. We try to steer the conversation to happier topics, and eventually we somewhat succeed.

Reasonably merry but cold as frogs we eventually hit our sleeping bags, and try and catch some Z’s before we can start making our way up the mountain. There are no beds here so we have to sleep directly on the wooden floor, which isn’t exactly comfortable. When I wake up at 2 AM, my back hurts like hell.

Still half-asleep we gear up, switch on our headlamps and begin our long march into the darkness. Jose has sobered up a little, apologising profusely for drinking too much earlier that evening. We tell him it’s okay. For the first hour we barely talk and just focus on the dirt road ahead of us. The night sky is full of stars.

At the end of the dirt road a narrower path leading up to Tajamulco begins. When we get there, I notice two light beams in the distance. As we get closer I see the light is emanating from the headlights of two cars parked opposite each other. There’s two silhouettes in front of the lights.

When we approach, two guys stop talking. They give us a “buenos noches” that seems friendly enough, but there’s an awkward silence as they obviously wait for us to pass. What are two guys doing at 2.30 AM at the base of a volcano in the middle of nowhere on christmas eve? Not assuming some kind of romantic encounter, our guide says they were almost certainly “conducting some business”. It feels ever so slightly sinister.

The night air is cold and gets even colder as we ascend. There’s not much to see ahead of us except the circles of light cast by our headlamps, but I can tell we’re much higher up now just from the little flickering lights of distant towns down below.

The climbing is tough and we’re constantly gasping for air. I regret sleeping on a floor, and last night’s dinner doesn’t sit well with me either.

Much intense hiking later the summit contours become vaguely visible up ahead. Finally we pass a base camp where a couple of other hikers have set up tents, making me deeply envious of their vastly superior sleeping arrangements for the night (it might be horribly freezing up here, but at least they had a soft surface to sleep on).

While I desperately want to make it to the top in time for sunrise, today isn’t my day. I love to climb mountains, but volcanoes are notoriously steep… not to mention that I have this piercing pain in my back from sleeping on that wooden floor. About 100 meters before the summit I’m so thoroughly drained I feel like I might collapse. When I’m told it’s at least another 30 minutes of heavy climbing, I lose any motivation to keep going.

I decide to wait here while my travel buddy (who is in better shape) tries to make it to the summit together with our guide.  I’m too tired to be disappointed, though since we’re already above the clouds at this point I remind myself that I should still have an amazing view from here. I find a spot to sit down in the dark, switch off my headlamp and wait. Huddled up in a ball I’m quickly freezing my ass off, not feeling my fingers or toes anymore.

In what turned out to be one of the happiest little accidents in all of my travels, I put in my headphones and hit play on my music player. I had earlier been listening to an interview with Canadian astronaut Chris Hadfield who had spent six months living on board the International Space Station. The interview continues just at the point where Hadfield explains how from low earth orbit you can see the most incredible sunrises every hour. Just as he describes the sheer majesty of seeing a sunrise from space, the first rays of light appear on my horizon, and soon I’m looking at the most majestic sunrise I’ve ever seen on Earth.

I feel like a tiny creature on a giant planet. The first light reveals the base of the volcano below me, with cloud formations flowing down the ridges like waves. The clouds look like a gigantic neverending rip curl. It’s perfect.

It’s moments like this that have made me stop using the word “awesome” to describe anything that doesn’t literally inspire awe. I don’t know what other word captures this feeling. It is awesome in the true meaning of the word.

There’s morning dew dripping from all the plants and flowers around me now, and I can feel the warm glow from the sun in my face. I keep quietly watching in honest-to-goodness awe, until about half an hour later I’m reunited with my friend and our guide. We all wish each other a merry christmas, and me and my buddy agree this view surely has to be one of the best christmas gifts ever. The heavy climbing, the back pain, all of it is forgotten. While my friend’s pictures from the actual summit look amazing—and while I wish I could have shared that initial moment of amazement with him—I don’t regret not making it quite all the way, as I would have probably missed the precise moment of sunrise.

We can’t stop marvelling at the view, but eventually have to start making our descent again. Around 8 AM it’s already getting too hot for our thermal jackets. With the sun now out in full force our guide seems to be in a much more chipper mood. He tells us about how happy he is doing what he’s doing: he gets to enjoy these amazing views several times a week, and to him that’s just priceless. For the first time on this hike, Jose has got a big smile on his face. It seems that for him it’s not all about the fucking money anymore.

While we were some of just a handful of people on the mountain before, lots of hikers now greet us on their way up. Most of them are Guatemalan families wearing traditional multi-coloured clothes and carrying portable radios playing raggaeton and bachata. Suddenly this mountain—which had felt so cold and ever so slightly creepy at night—is now utterly lively and colourful.

Tired but satisfied we make it past the little restaurant we’d stayed in earlier, back to civilisation. There are no buses today so we hitch rides on the back of pickup trucks all the way back to the city of Xela, where hot showers and mulled wine await us at our hostel. Finally we say goodbye to Jose who I thought sure deserved a tip after hiking up to 4,220 metres altitude on what must have been one hell of a hangover (self-inflicted though this problem may have been!).

After Jose’s drunken stories, our mysterious nightly ascent, and seeing the most stunning sunrise along with the perfect astronaut commentary, this was a day I would not easily forget… 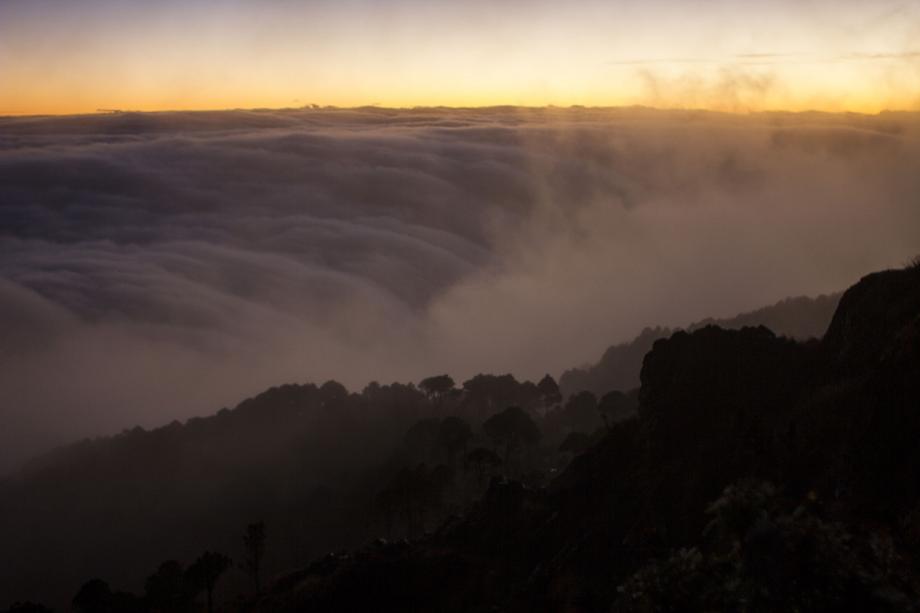 The first rays revealing the forest and clouds below. 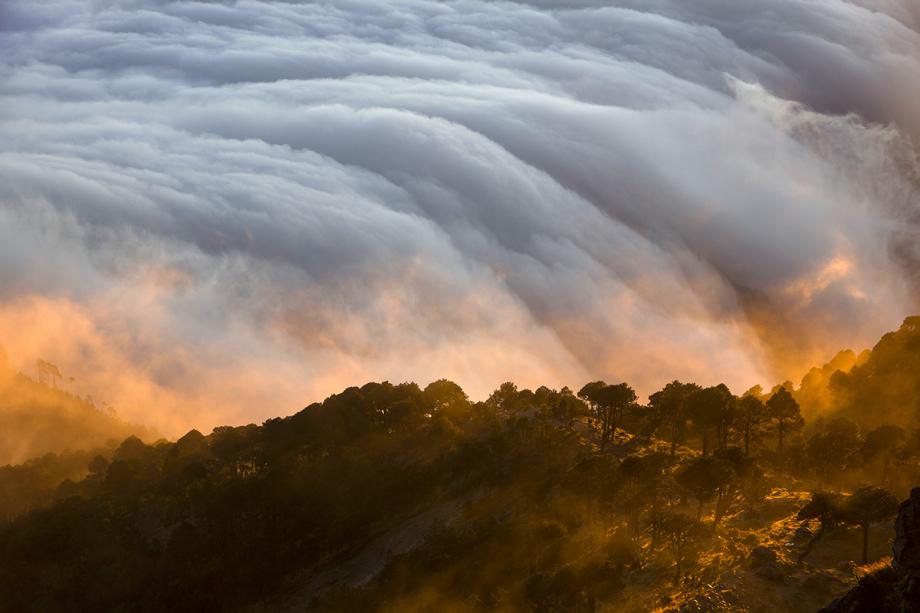 The clouds slowly gliding down the mountain range. I’m feeling the first glow from the sun… 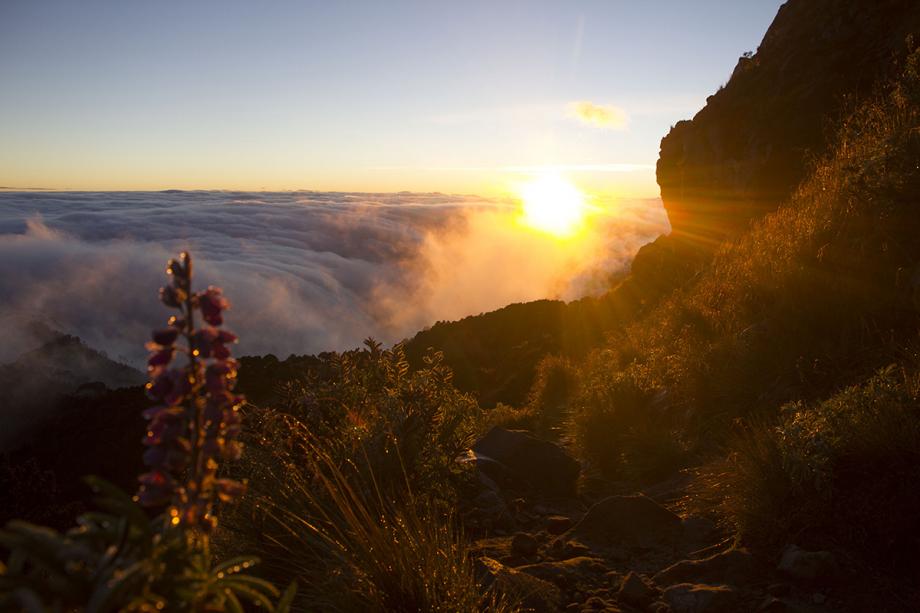 Drops of thaw forming on the plants… 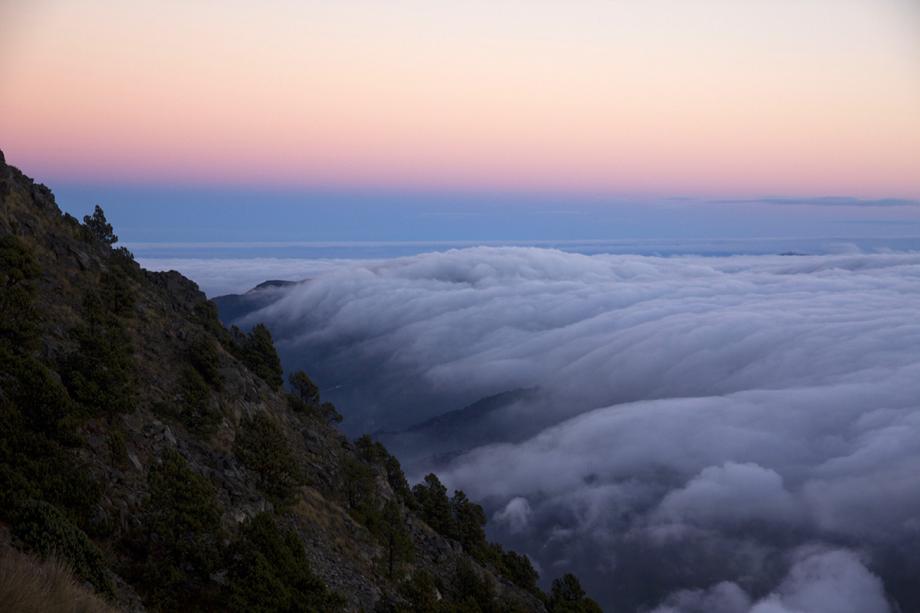 View on the other side towards the border with Mexico 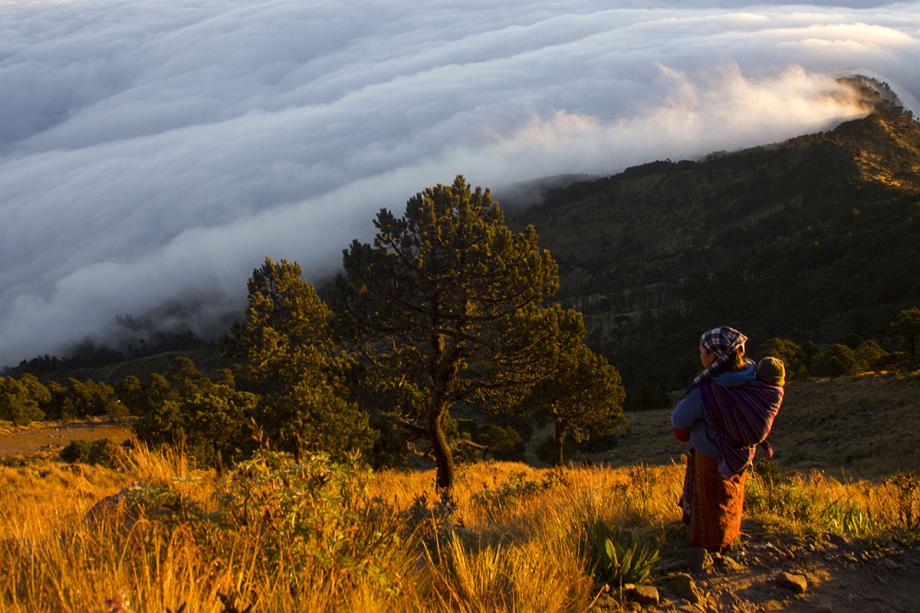 Later, a Guatamalan family had also made their way up 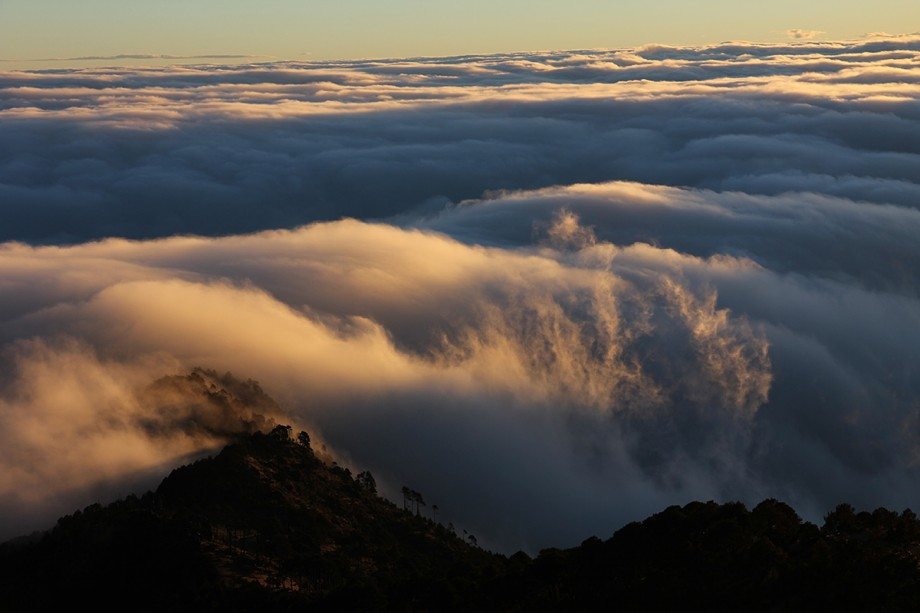 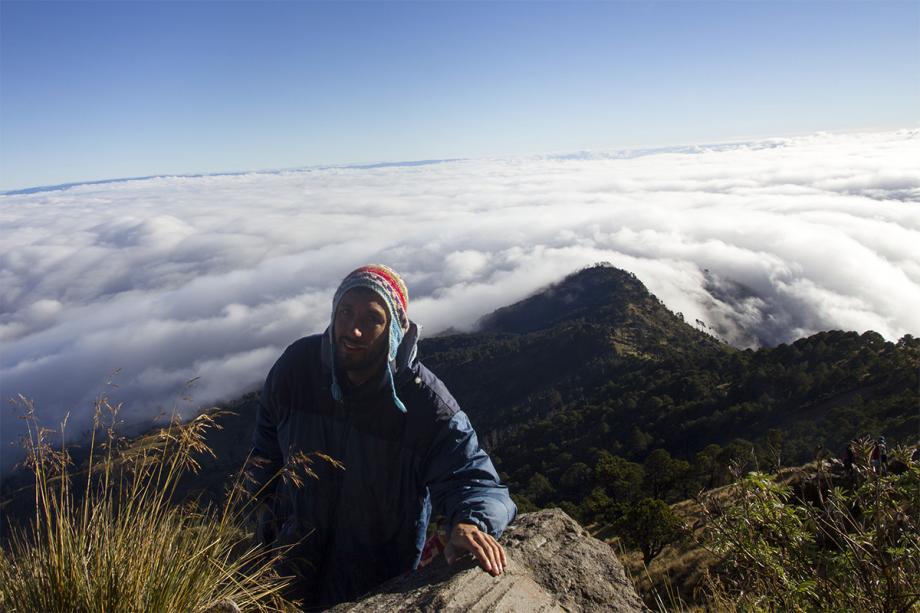 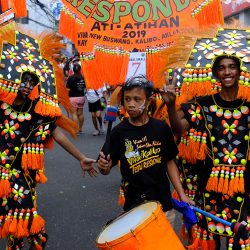 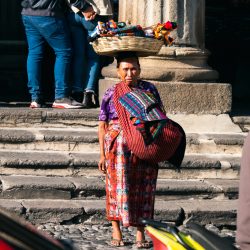