A Backpacker’s Guide To Nicaragua 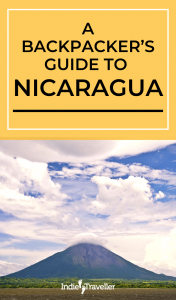 Nicaragua is getting steadily discovered by intrepid surfers and backpackers, drawn by its rock-bottom prices, local vibe, and nascent ecotourism. It’s an under-the-radar destination that is not to be skipped.

When I first visited Nicaragua, it seemed like an overlooked tourist destination in Central America. It even felt like a bit of a new frontier. Case in point: my Lonely Planet guidebook for Nicaragua was only in its 3rd edition, compared to about a dozen editions for countries like Costa Rica or Mexico. 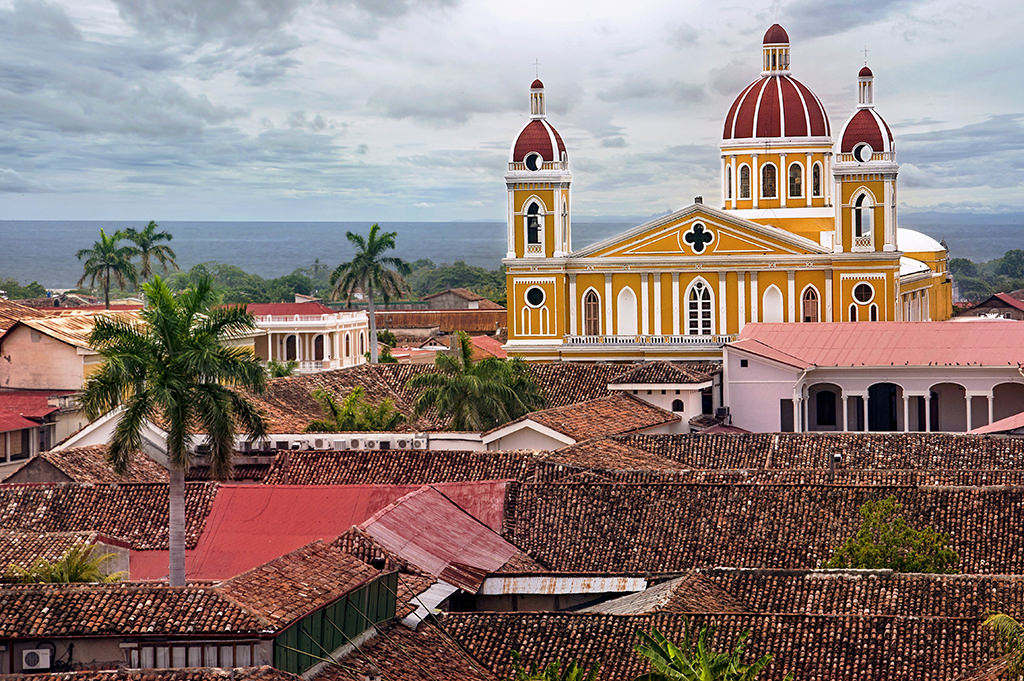 I loved my time in Nicaragua while backpacking the Latin American Gringo Trail. It’s possibly the cheapest country in Central America, which made it an ideal place to stay longer, learn some Spanish, take surfing lessons, and do lots of fun tours and activities for less half what they’d cost in neighboring Costa Rica.

The scenery and nature in Nicaragua is maybe not quite as epic as that in Guatemala or Costa Rica (subjective as that is), though its many volcanoes, beaches and the Nicaragua Lake do make the country extremely worth visiting. It is also a fantastic cultural destination, with the colonial cities of Granada and Léon being great attractions in particular.

Plan your trip to Nicaragua

Not yet convinced that you should go? Then consider some of these top reasons for visiting Nicaragua.

A haven for thrillseekers

Whether it’s surfing in San Juan, kayaking or mountain biking around lake island Ometepe, or boarding down the slopes of an active volcano (!), active travelers will find tons of things to do in Nicaragua.

A place to slow down and relax

It’s equally easy to embrace your inner sloth. Ometepe island, which is in the middle of lake Nicaragua, is a particularly relaxed place with little traffic and plenty of hammocks. Look for surfer hangouts on the pacific coast where you can cheaply rent a place right on the beach.

While you shouldn’t take this to mean that it’s 100% safe everywhere (the capital Managua does have a bit of a bad rep), Nicaragua has fortunately mostly escaped the gang violence that has afflicted other nearby countries. If the grittier Honduras or El Salvador make you at all uncomfortable, consider Nicaragua as a safer alternative.

There are good dorm beds to be found for just $5 – $6 a night or budget private or semi-private rooms for as little as $10. A typical meat-with-rice-and-beans set meal will set you back just $2. At the moment Nicaragua is quite possibly the cheapest destination in Central America.

Following unrest in 2018, there was a period during which tourism in Nicaragua slowed to a trickle. Now the country is back in the game, but still without the crowds you may see in other destinations. If you’re looking for somewhere very pure that is still mainly the domain of backpackers and adventure travelers, then this is it.

While Nicaragua is the largest country in Central America, the majority of its key sights and cities are clustered in the south-west.

See those two lakes near the pacific coast? That’s where most things are, and that’s where you can focus much of your trip research. Distances between the major sites here are pleasantly manageable; typically the most you will have to travel between places in this region is about 6 or 7 hours. 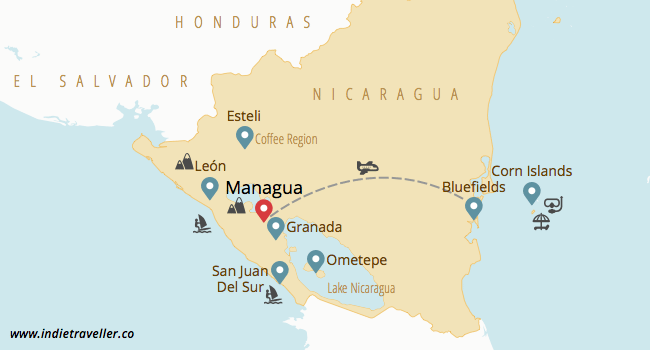 Those looking for somewhere more off the beaten path may want to consider the the mountainous regions north-east of Managua and Leon. The Caribbean side of Nicaragua consists mostly of remote and dense jungles with apparently some of the worst roads in Central America. Not many travelers go this way with one exception: Corn Island is a popular destination in the east, which is best reached by plane from Managua. (Note: as it is remote, the Corn Islands are somewhat more expensive than the rest of Nicaragua.)

Places to visit in Nicaragua

Explore the old cities of Grenada and Léon

While the capital of Managua was mostly flattened in an earthquake years ago (and is now an unappealing sprawl), the cities of Granada and León are fortunately very well preserved and full of Spanish colonial architecture.

Granada is probably the most pleasant of the two, its main cobblestone street lined with nicely-renovated houses with a variety of restaurants and tourist shops inside. While Granada is the prima donna with its done-up buildings and a fair number of tourist restaurants, León is the grungier and more chaotic of the two. León may lack the fresh paint you find on the walls in Granada, but it has a sort of rough beauty that to me personally was more interesting. (This blog has a really nice comparison of the two cities.) 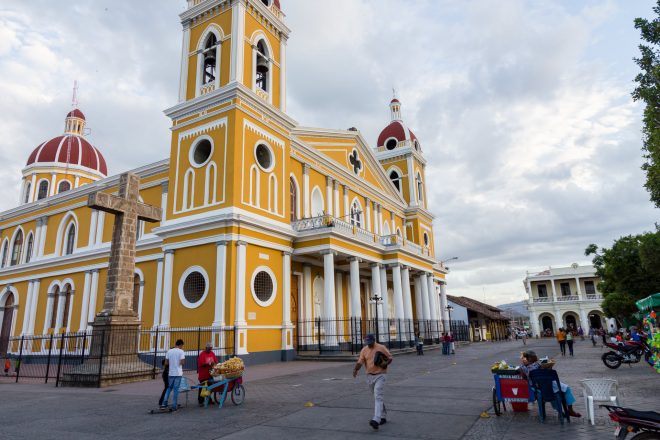 Slow down on Ometepe

Ometepe is an extraordinarily scenic island formed by two joined volcanoes called Concepcion and Maderas and located right in the middle of Lago de Nicaragua.

Hiking the volcanoes, kayaking and mountainbiking are the main activities here. But if that sounds exhausting, Ometepe is fortunately also a wonderful place to unwind. Read a book in a hammock while enjoying lakeshore views, or take a swim in the island’s thermal springs. Be sure to spend at least a couple of nights on the island!

Board down a volcano

In Nicaragua you can go volcano boarding. This improbable combination of words means exactly what you’d think it does: you hike up a volcano and then glide all the way down on a board. Nicaragua claims to be the only place in the world where you can do this. Ther are a number of different operators with tours leaving from Leon, with some using speed meters to keep score of everyone’s top speed. Some people do get injured while volcano boarding, so be careful. 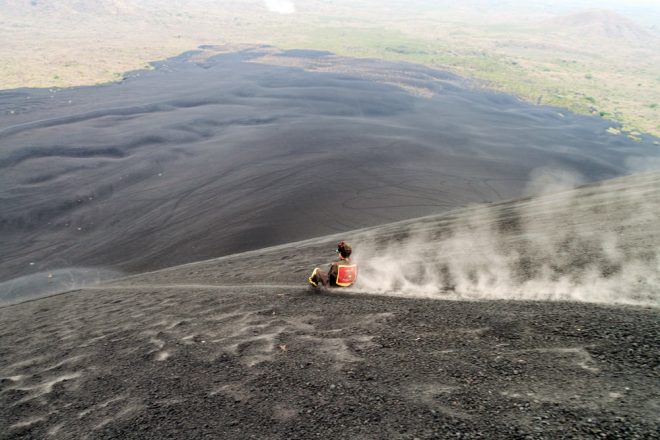 Snorkel, dive or fish on the Corn Islands

The Corn Islands are Nicaragua’s remote outposts on the Caribbean side. Most native islanders here have more in common culturally with Caribbean islands than they do with the Nicaraguan mainland, and you will find that most people speak English. The islands have almost no traffic, with small golf carts being the main form of transportation. Both Big Corn Island and Little Corn Island make for excellent bases for snorkeling, SCUBA diving or ocean fishing. 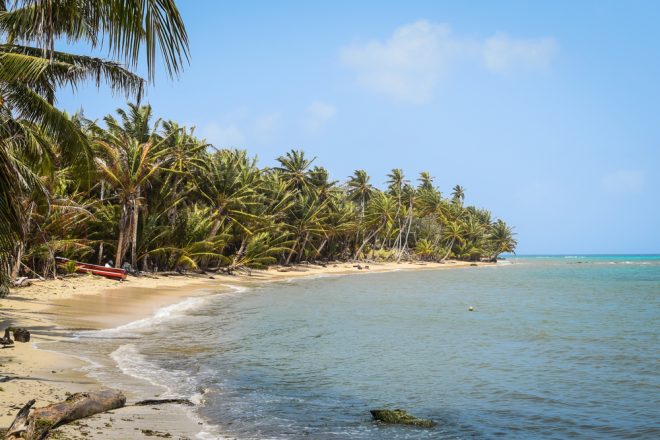 While it is possible to get to nearby Bluefields by bus and then take a ferry, this journey takes very long and runs along very badly maintained roads through the jungle. It’s easiest to simply fly to Big Corn Island from Managua.

San Juan is Nicaragua’s number one surfer and backpacker party hotspot: a place that may not appeal to everyone, but can make for a fun stop along the way. It has ‘gringofied’ a great deal, though it’s still a very small and laidback town—and a far cry from the slick beach developments in countries like Mexico. 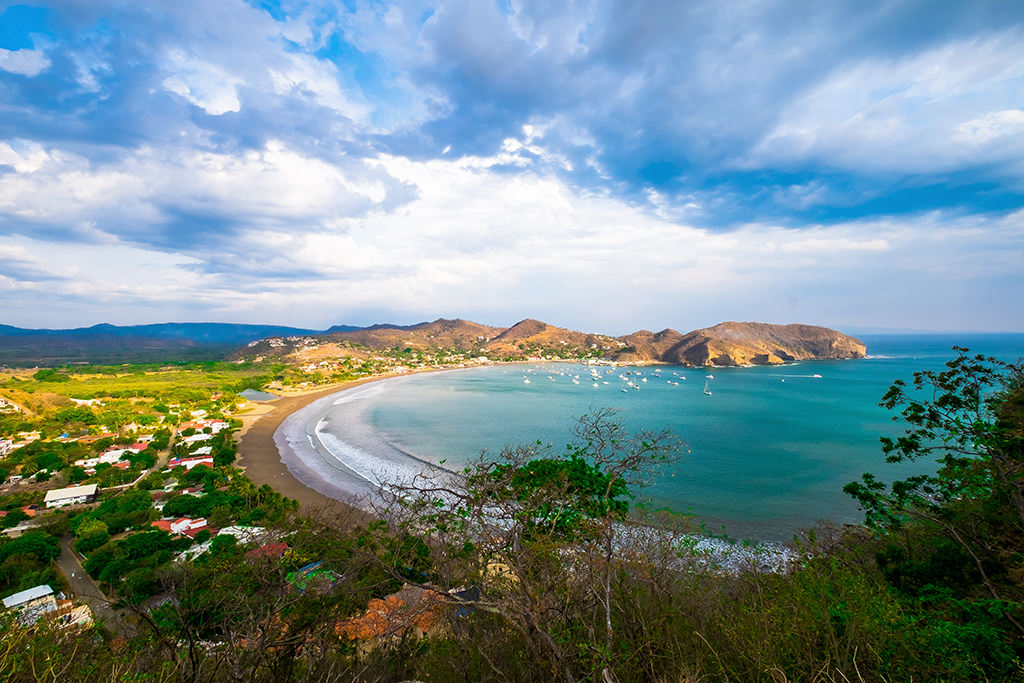 There are regular movie nights and pub crawls in town, as well as the legendary Sunday Funday, which is essentially a big wild pool party with great sunset views. San Juan is home to three notorious Canadian or Australian-owned hostels where games of beer pong are a regular occurrence: Pacha Mama, Naked Tiger and Casa de Olas. Warning: these are not for those wanting a good night’s rest!

San Juan del Sur is not all about partying. You can take fishing or snorkeling trips from here, hike up to the town’s Jesus statue overlooking the bay (a very poor man’s version of Brazil’s Cristo Redentor), or learn Spanish in one of the many affordable language schools. Several beautiful beaches are just a short jeep ride away: the playas hermosa, marsella and maderas.

Surf and swim at playa Maderas

If you are seeking a more tranquil place near San Juan you’d do well to go to playa Maderas, which is about a 20-30 minute drive north from town. Jeeps and pickup trucks regularly take passengers from San Juan throughout the day. 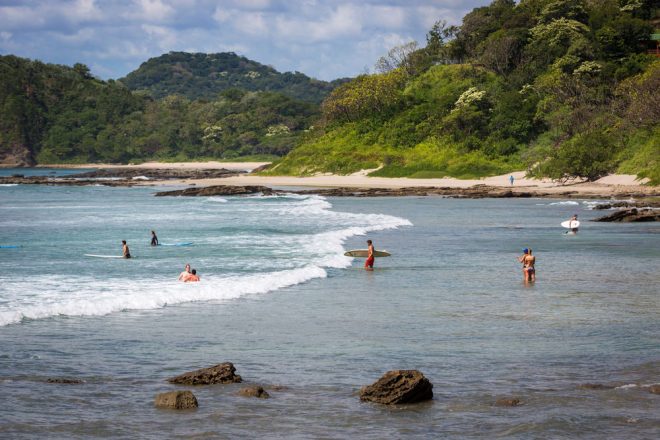 The beach in San Juan town itself may not be much to write home about, but Maderas is a stunner. I stayed in one of the hostels on this beach for a week, and there’s nothing like waking up in the morning and going for a run on an empty beach with hundreds of little crabs dispersing in your path. Around noon people from San Juan begin to arrive making the place very lively, though it turns completely quiet again around 5pm. It’s a magical place that has very much the opposite vibe of San Juan.

Hear the roar of an active volcano

Besides volcano boarding, Leon is also a great base from which to go on volcano hikes. I can highly recommend hiking up to the top of Mount Telica, a still-active volcano. You can lie down on your belly and peek over the edge of the crater to see the lava below, where it’s an immediate drop of hundreds of meters. 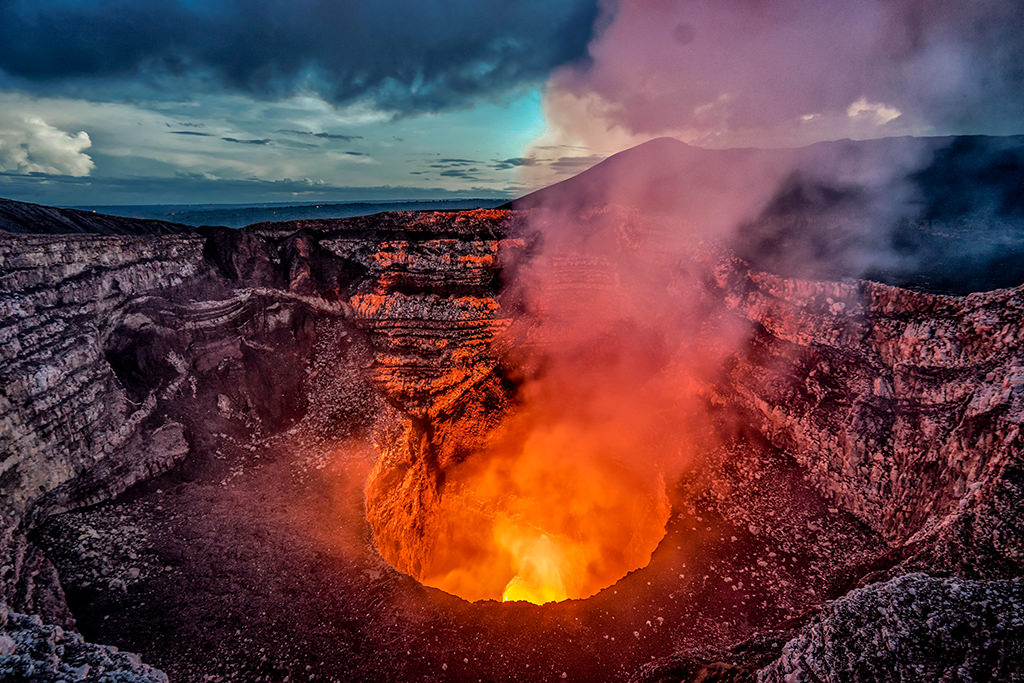 The hike up is beautiful and not too strenuous, though go with a guide as there are scorpions, tarantulas and rattlesnakes to avoid on the way. It’s possible to take a daytrip or to camp at the top and stay the night there. Apparently, it’s also possible to drive up the volcano and only walk the last bit, but the hike is wonderful and makes reaching the crater feel all the more rewarding.

Another popular volcano hike goes up to Volcan Masaya, which is not far from Granada. 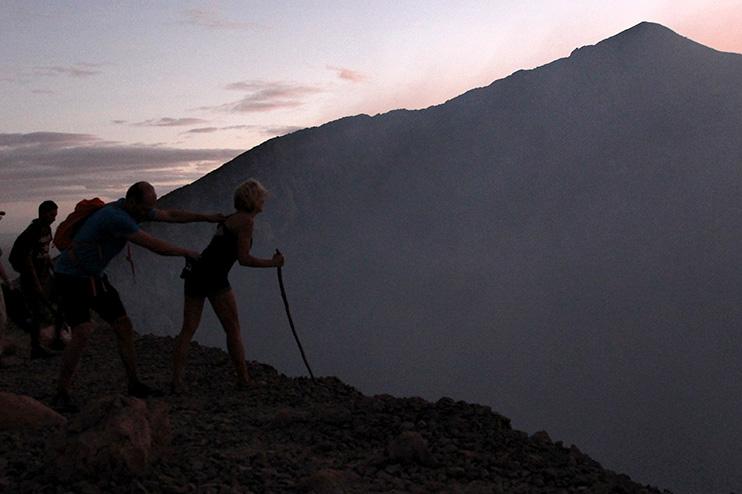 Float around the crater lake of Apoyo

Near Granada, you will find a lake in the middle of a volcano crater, which is a great place to swim around and enjoy the sun, or to go kayaking or paragliding. Visit the nearby town of Catarina for a great panoramic view of the lake. The town is also famous for its pottery and other handicrafts and is a great place to pick up some souvenirs

Enjoying your trip is as much about where you’re staying as where you’re going. Fortunately, there is some amazing accommodation in Nicaragua offering exceptional value for money. Here are a few suggestions:

Pool, BBQs, movie nights — but not so over the top as San Juan's party hostels.

Friendly and relaxed hostel. Nice alternative to the loud party hostels in Leon. 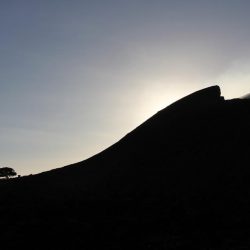 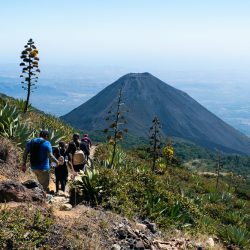