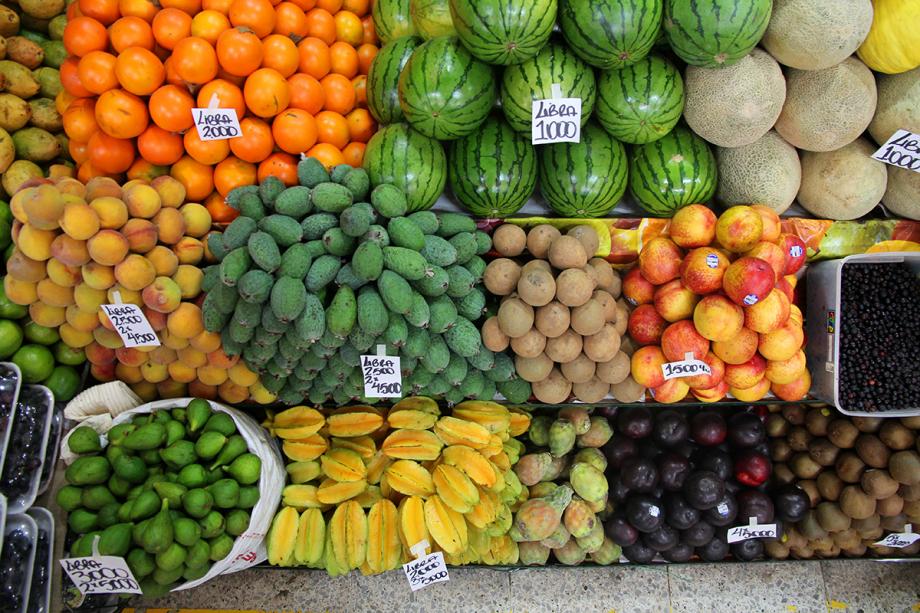 One of the delights of travelling in tropical countries is the sheer abundance, variety and quality of tropical fruits!

Some staple fruits taste decidedly better in Asia or Latin America than they do elsewhere. Mangos, when in season, are phenomenal wherever they are grown. Pineapple in countries like, say, Thailand or Colombia tastes a world apart from what passes as pineapple in Europe. On the other hand, bananas oddly taste about the same everywhere in the world (as far as my taste buds can tell me).

But there is much more to try than just the usual pineapples and bananas!

Next time you go on a fruit market on your trip or get a fruit shake made, consider trying some of the following exotic fruits. 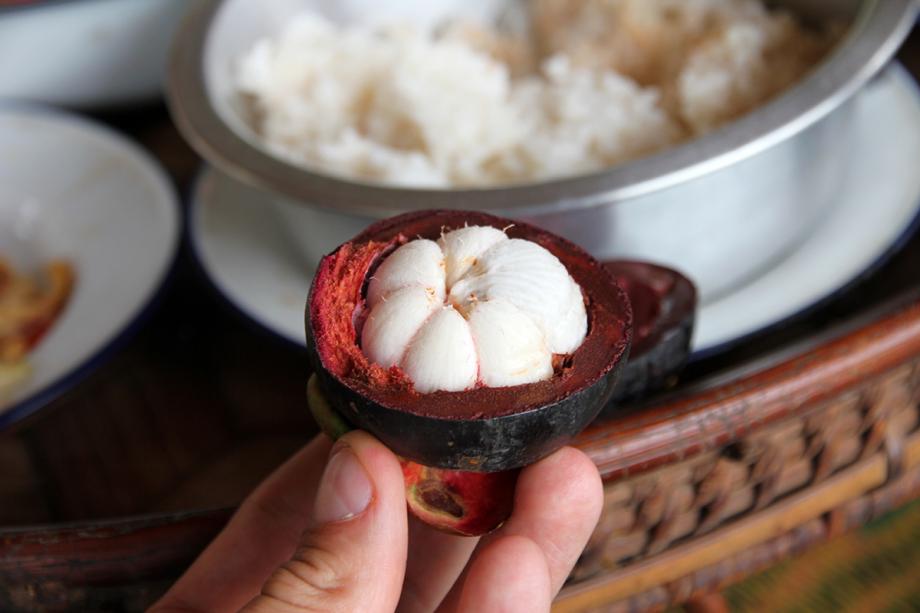 Having mangosteen for desert in Laos

These have nothing to do with mangos! Mangosteens grow mainly in Southeast Asia, but also in tropical South American countries such as Colombia and Puerto Rico. The key to eating this is to cut it at the top, and inside you will find a sweet white flesh resembling garlic cloves. Scoop the cloves out with a spoon. To my mind it tastes a bit like pear, but with a stronger consistency.

Mangosteens are rarely sold fresh in Western countries so take your chance when you see them. 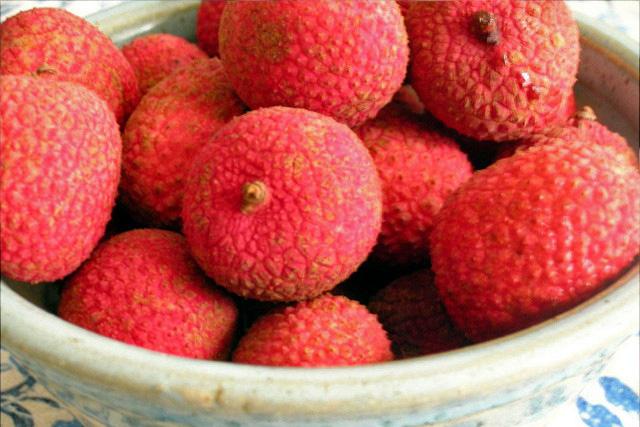 This fruit originated in China but is today grown in many places around the world. They’re grown in Thailand and Brazil, among other places.

You can get them in Europe but they’re not very common, and usually they’re canned and preserved in sugar syrup (gross!). One time in a fancy bar in London me and my friends ordered 4 lychee martinis, only to be told that “regrettably, we only have one lychee left”. This would never be a problem in Thailand, where the waiter could probably just cross the street and buy some more.

Lychees have a sweet delicate taste, kind of between a pear and a grape. 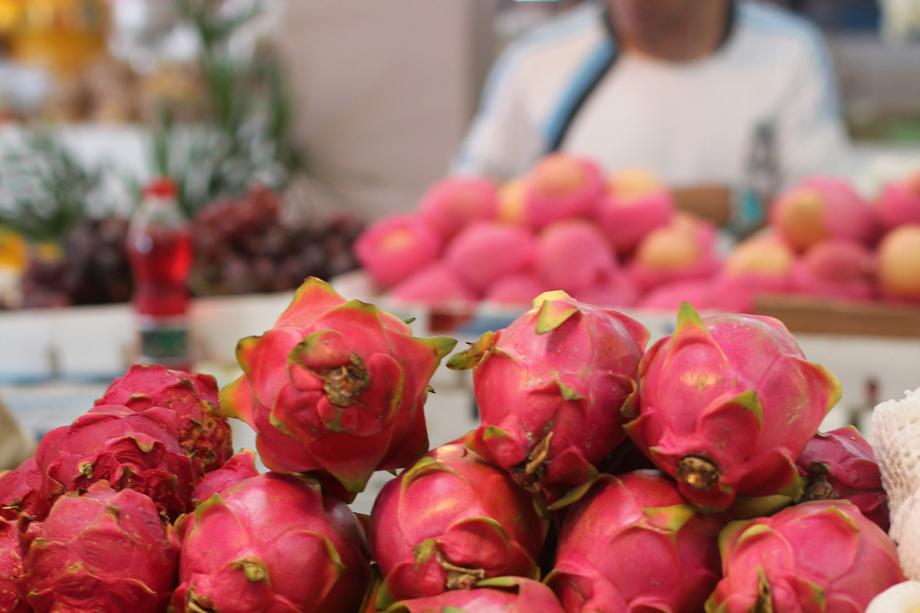 Dragon Fruit (or Pitaya) is common throughout Southeast Asia as well as East Asia (e.g. China and Taiwan). I like them a lot though they can be an acquired taste; I know some people find them a little on the bland side, kind of like watermelon. 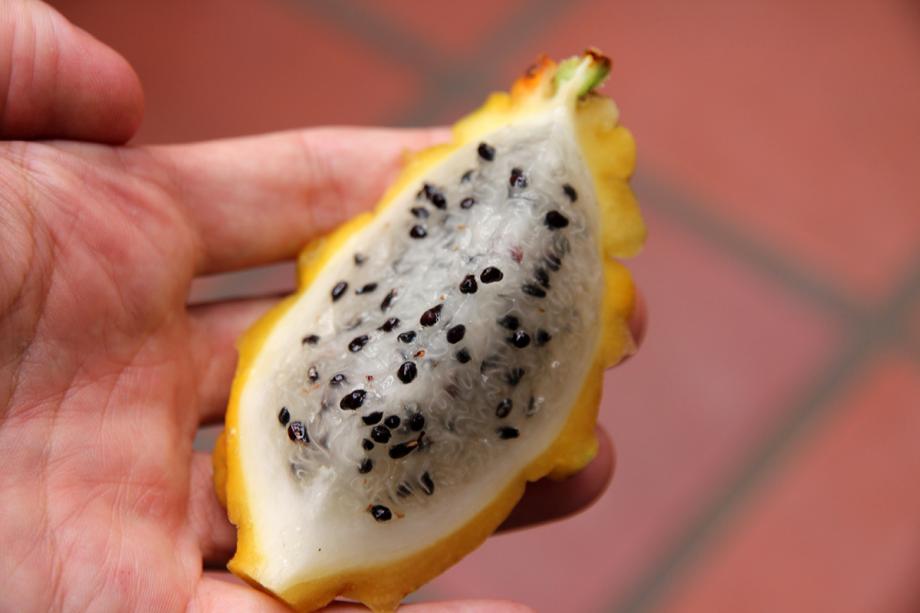 The yellow Dragon Fruit is much sweeter than the Pink version.

Where: mainly Central America and northern South America (not as common in Southeast Asia) 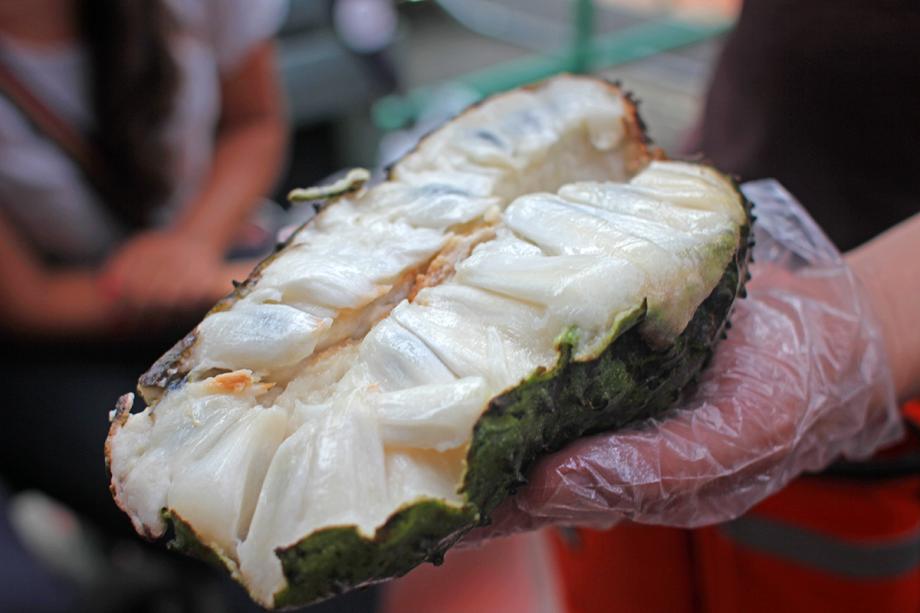 Okay, so this ancient Incan fruit is fucked up. Eat these mainly for the experience—if you don’t mind getting your hands dirty!

Guanabanas are a bit difficult to handle so getting the fruit out will be messy. Their appearance and texture are weird, and it’s kind of got the consistency and chewiness of white fish. To me it seems kind of like a sea creature that got trapped inside a fruit shell by an evil wizard. It’s worth having a try picking this thing apart.

The English name Soursop is a bit of a red herring. It actually tastes a bit like pineapple or banana, and isn’t sour. 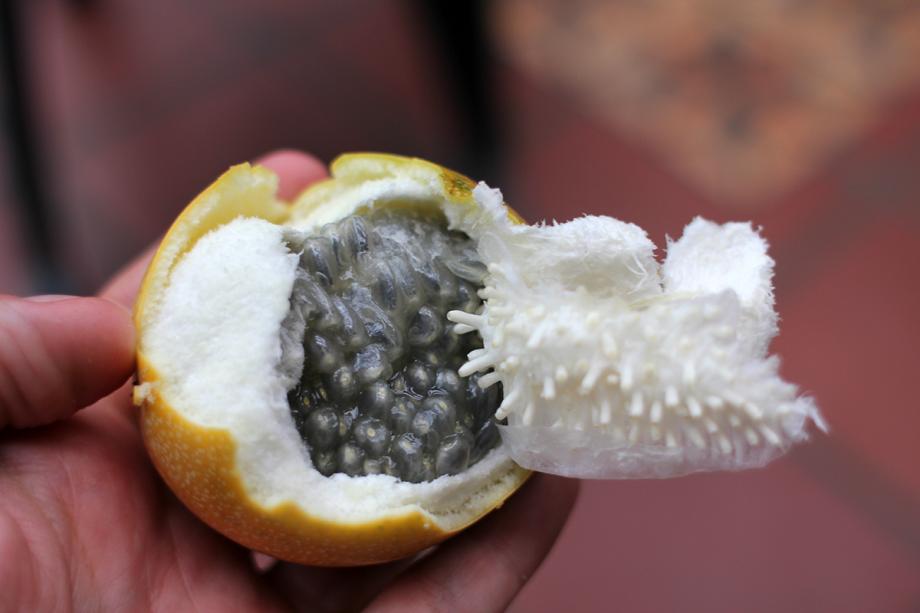 Look at those crazy little tentacles on that shell!

There are many types of passion fruit, but the Sweet Granadilla is one of the more interesting ones. It’s got a white fluffy outer layer that feels a bit like felt. Inside are juicy seeds which you can suck out of the shell without your lips even touching the fruit. The taste is quite sour but very refreshing. 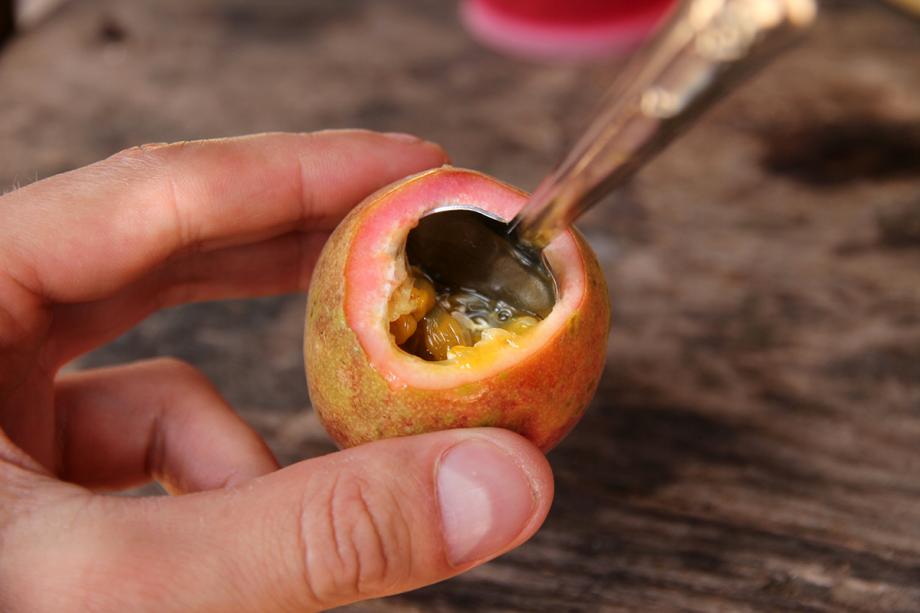 Passionfruit comes in a whole bunch of different shapes and sizes. Here’s a tiny one I had in Thailand. 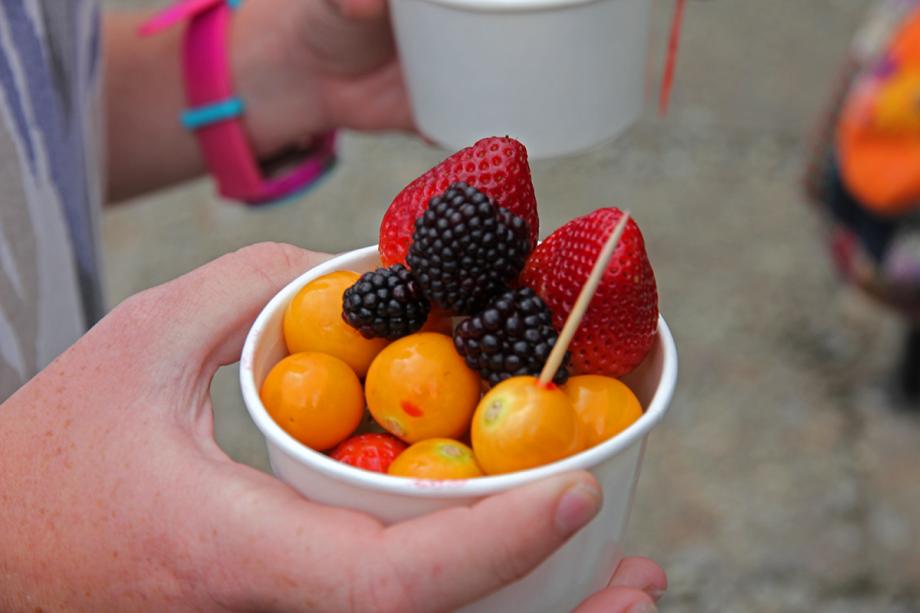 The orange ones are cape gooseberries…

These taste, not surprisingly, a lot like a gooseberry! They are especially common in countries like Colombia and Peru, where they are called uchuvas or aguaymantos. They’re a bit sour but fresh tasting and go well in combination with other fruits. 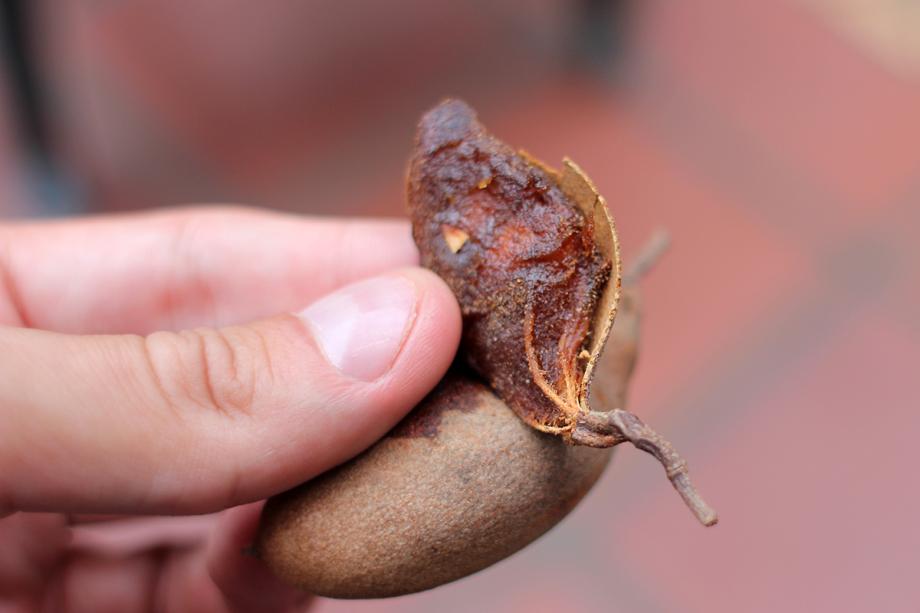 Not usually eaten on its own, but give it a try. (Nice with tea or coffee!)

Where: pretty much anywhere

The tamarind is not so much a fruit you eat on its own; it’s more often used as an ingredient in other things. But it’s fun to have a little taste of them. Inside their bean-like shells is a sticky paste that tastes a bit like raisins.

Fun facts: tamarind is used in Worcestershire sauce and HP sauce, as well as in Mexican mole negro. 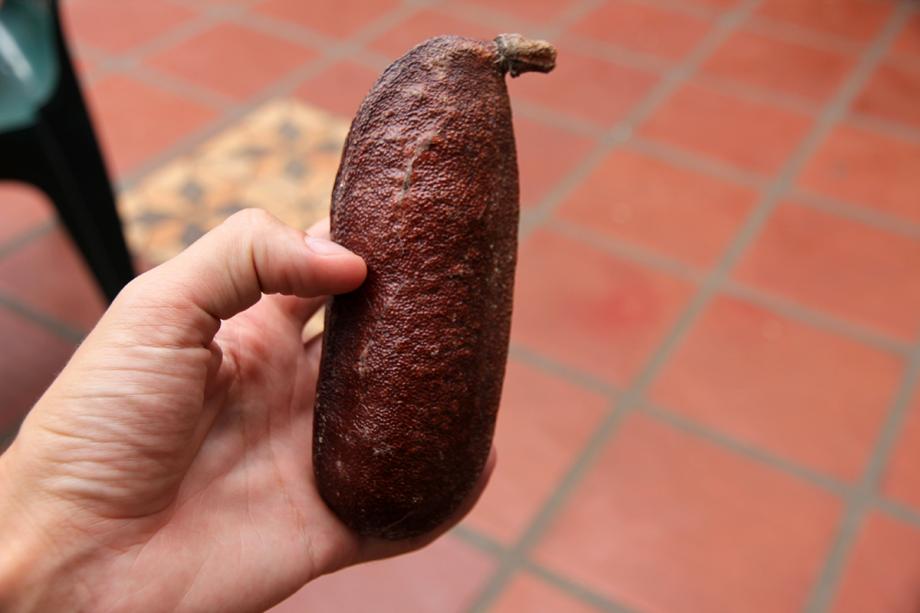 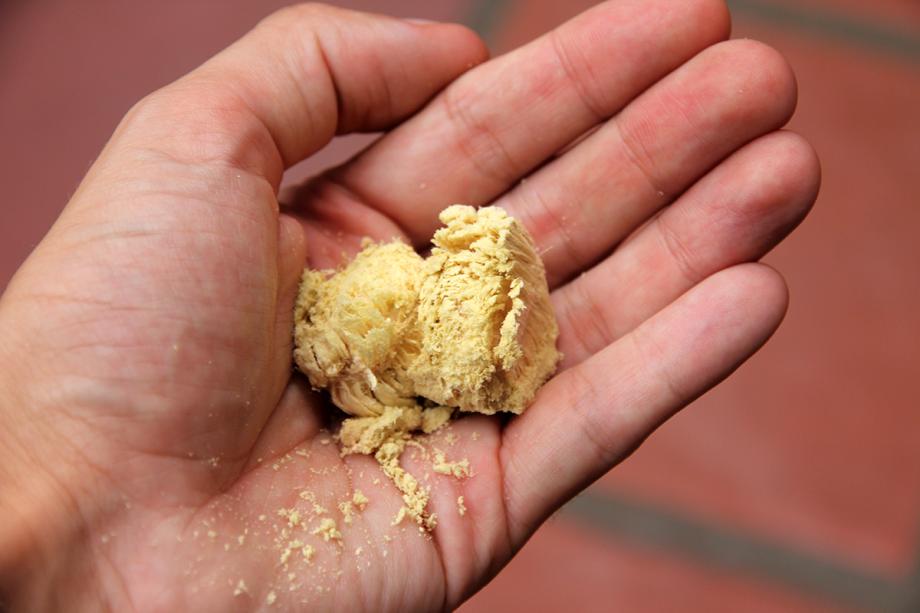 Another weirdo fruit. Try this if you are a little adventurous. Southeast Asia may have the super stinky durian, but South America has the locust fruit… it smells a bit like bad cheese mixed with used socks. The flesh has a strange stringy texture, and when you eat it it sticks to your mouth kind of like cotton candy. Unlike the smell, the taste is not horrible however. 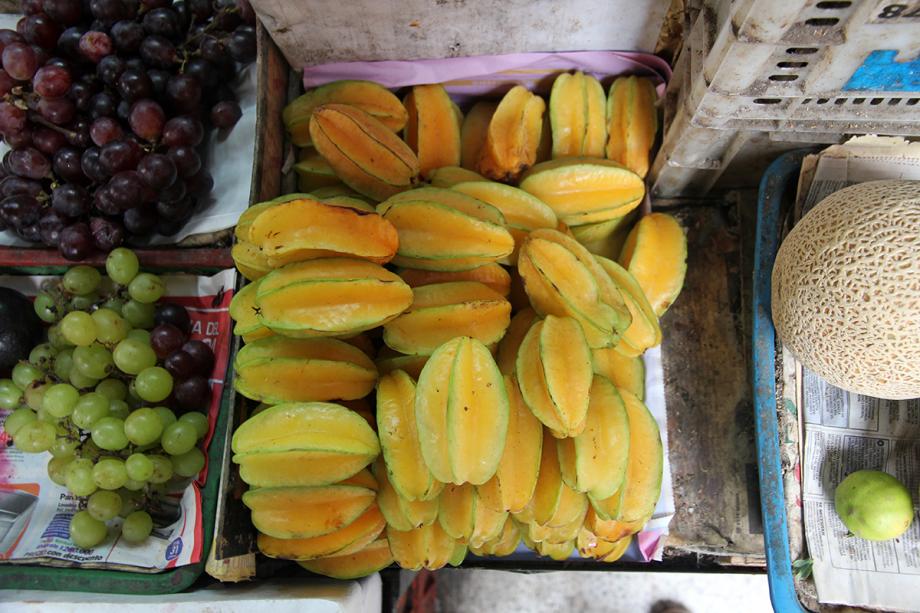 Where: mainly Southeast Asia and East Asia, can find it in Latin America as well

This fruit is a bit of a show-off. It looks fantastic, especially when you cut it as then the star shape is especially visible. These are nice to decorate a salad with, but personally I think the taste is a bit of a let-down. It sits sort of between a proper sweet fruit and a watery bell pepper. Good but not great.

Note: this fruit can be very harmful to anyone who has kidney stones, kidney failure, or other kidney issues. 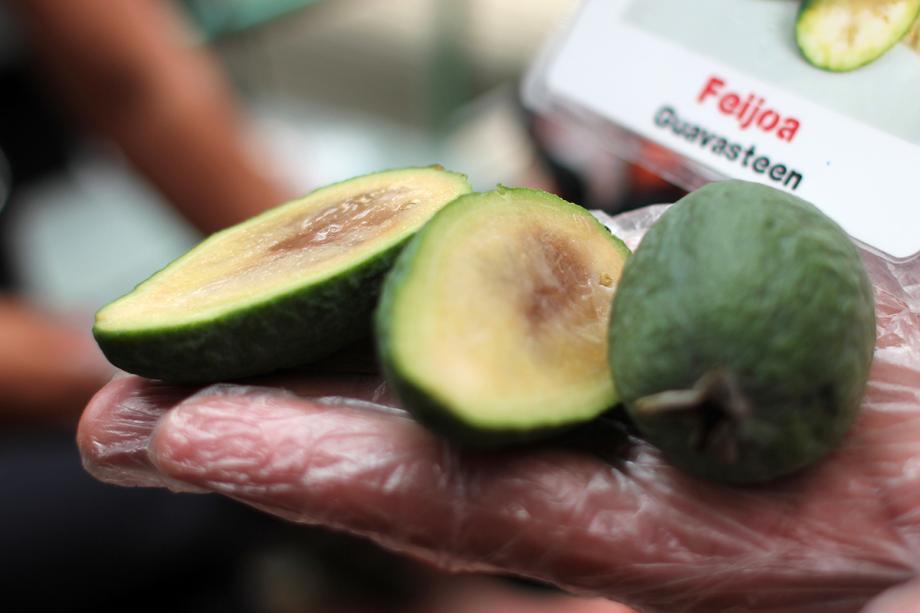 Aye caramba! The Guavasteen is a bit of a surprise. I still haven’t quite tasted any fruit like it. It’s very sweet and sort of rum-like… it reminds me a bit of desert wine or a liqueur. Another way to describe it is like apple pie, with a mint-y aftertaste. You have to try this!

The texture is a bit gritty like sand. In fact, the pulp is used in some natural cosmetic products as an exfoliant!

Oh come on now, let’s not waste any time talking about the papaya. Does anyone else think these smell vaguely like vomit?

Eaten only begrudingly by hungry backpackers when it’s already part of a fruit salad anyway, papayas are surely the worst. 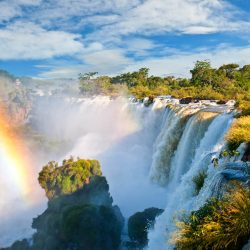 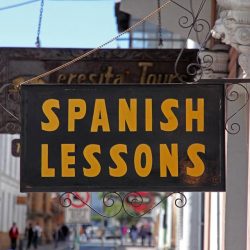