Why You Should Absolutely Visit São Jorge Island

Going off the beaten track in the Azores

The island of the fajãs

It was two years ago that I visited the Azores for the first time and first got a glimpse of São Jorge. From Pico Island, the unusually elongated neighbouring island seemed to beckon me from across the water.

“Oh, São Jorge?” my guide said when I pointed at it. “I guess that island has potential.”

Since I was on a fixed itinerary that didn’t include São Jorge, I didn’t really go there either. Still, my curiosity was piqued by my guide’s almost casual dismissal, making me wonder just what secrets it might harbour. 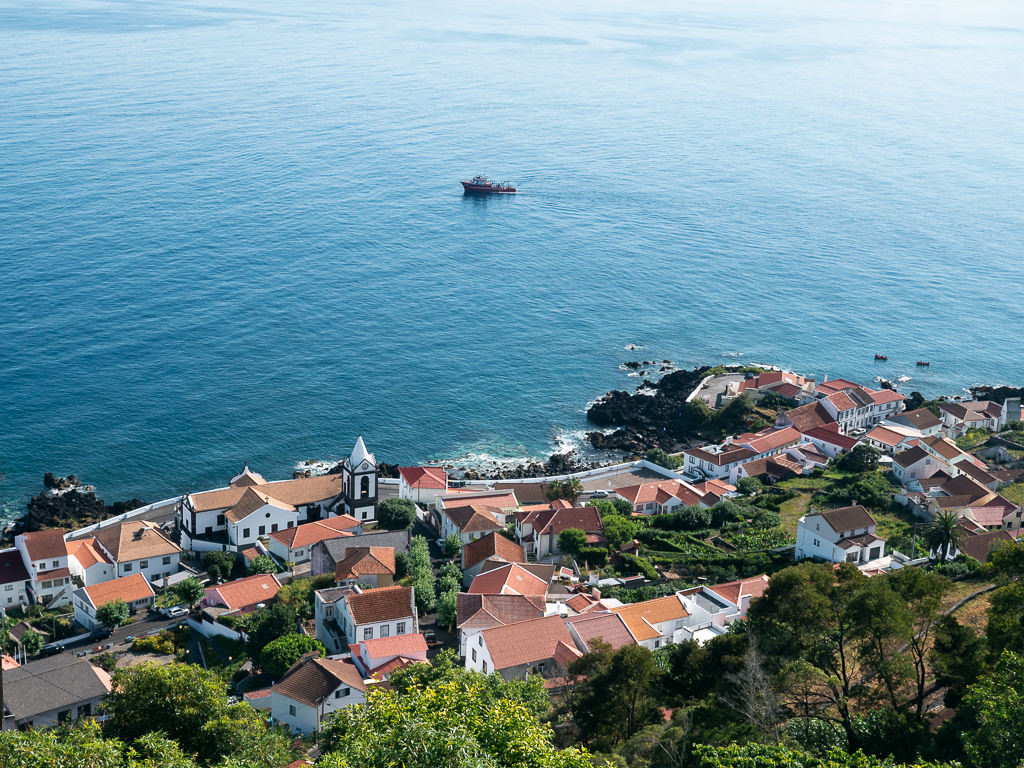 Heading back to the Azores, this time travelling with friends and on our own schedule, I knew I had to see it for myself.

And as I am sure you have guessed, São Jorge is simply incredible.

Plan your trip to Sao Jorge

The island of the fajãs

Approaching São Jorge’s port at Velas by ferry, it’s striking how its rugged and jagged coastline rises sharply from the ocean.

The geography of this island makes São Jorge unique within the Azorean archipelago. A central mountain range runs along almost its entire length, creating a formation similar to a plateau with major elevation drops down to the shore.

At sea level, dotted at the base of the cliffs, you’ll find many small plains called fajãs, which were once formed by lava flows or ancient landslides. Many of these fajãs are home to tiny villages, some connected by winding paved roads, while others can be reached only by foot. 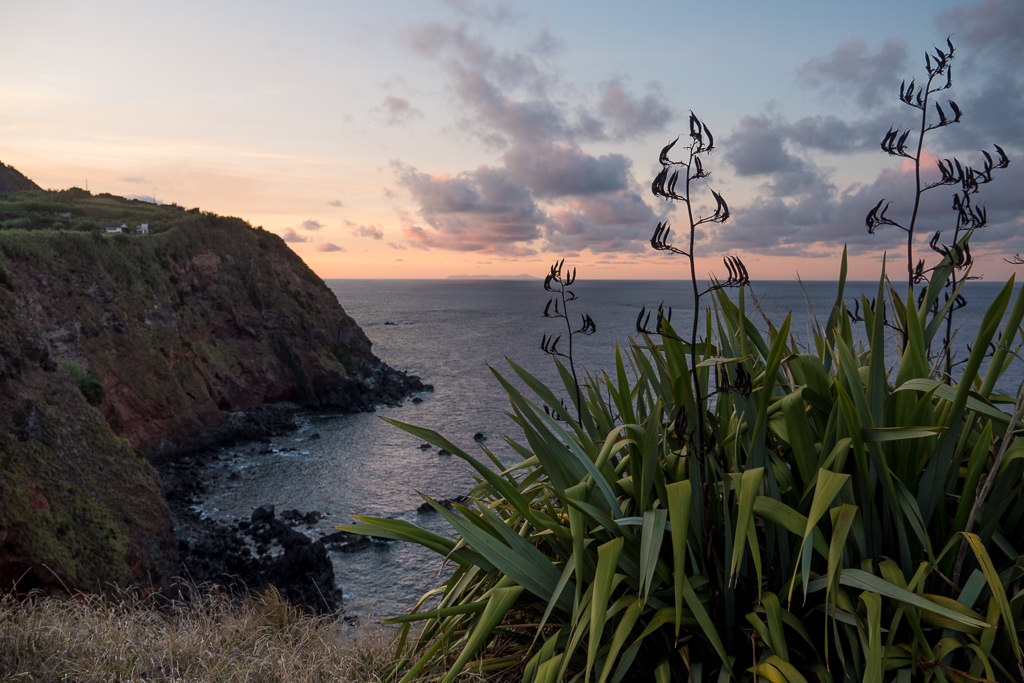 Although other islands of the Azores may have one or two fajãs, São Jorge has over 40, and it’s a joy to discover them. I spent an entire day driving along their winding roads lined with blue hortensias, going down into the fajãs, and stopping in the villages for fresh seafood or a swim.

In the fajã de São João (population: 7), we jumped off the fishermen’s docks for a refreshing swim in the sea. Despite being in the middle of the Atlantic, the water was just the right temperature in August. 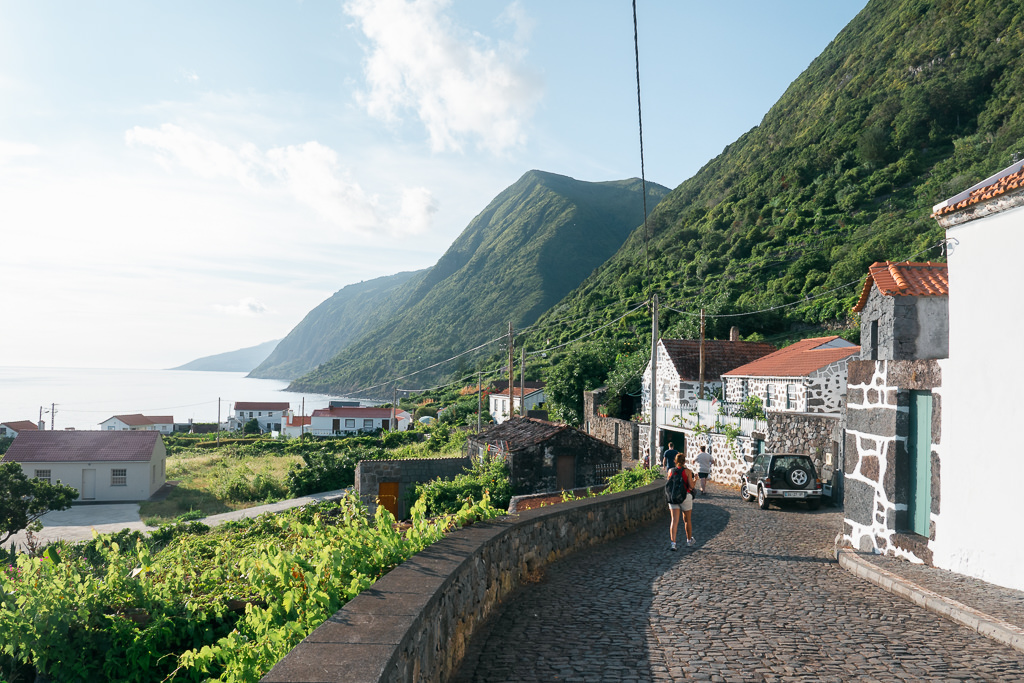 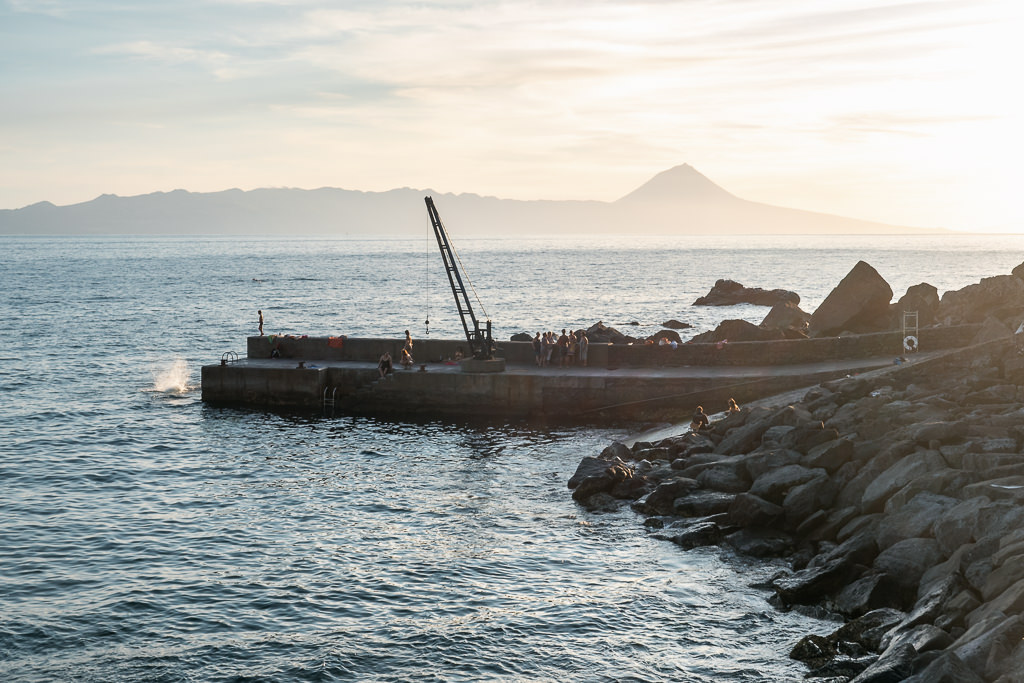 While drying off after my swim, enjoying the beautiful ocean view with the conical contours of Mt. Pico in the distance, I noticed a strange shape moving in the water. As I watched, it grew larger and came closer before I realised it to be the head of a scuba diver swimming towards the harbour. He finally walked ashore carrying a big speargun and bucket filled with fish, which he promptly began filleting, under the watchful eyes of a village cat and some curious children.

As surprising as it was for a random spearfisherman to show up from seemingly nowhere, it’s a scene that felt emblematic of São Jorge, a tranquil and rural place where local life just goes on as it ever does. 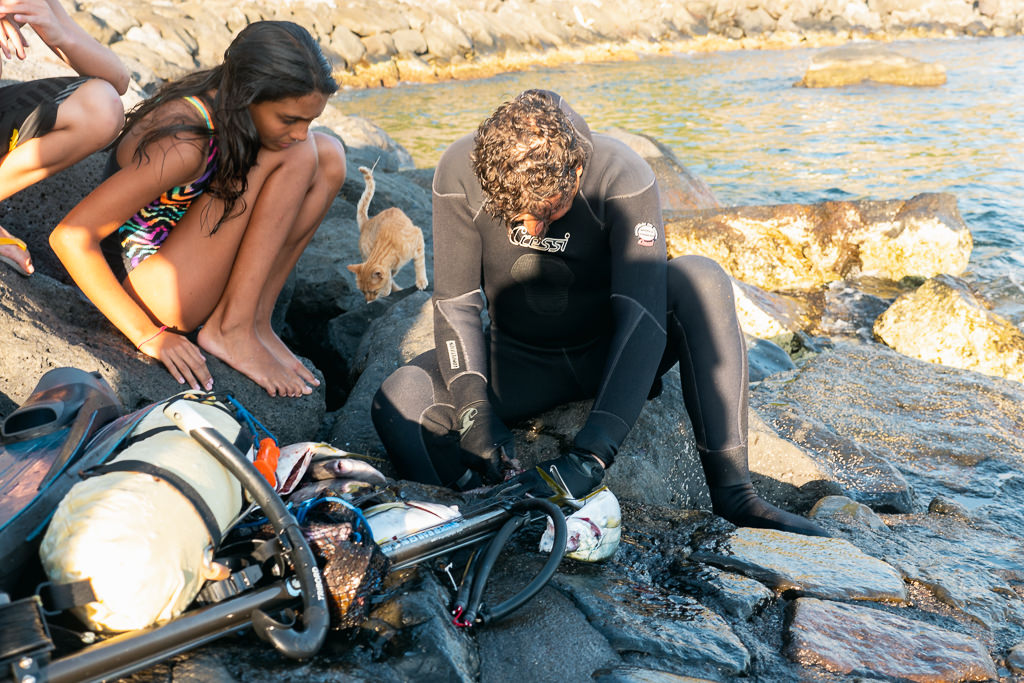 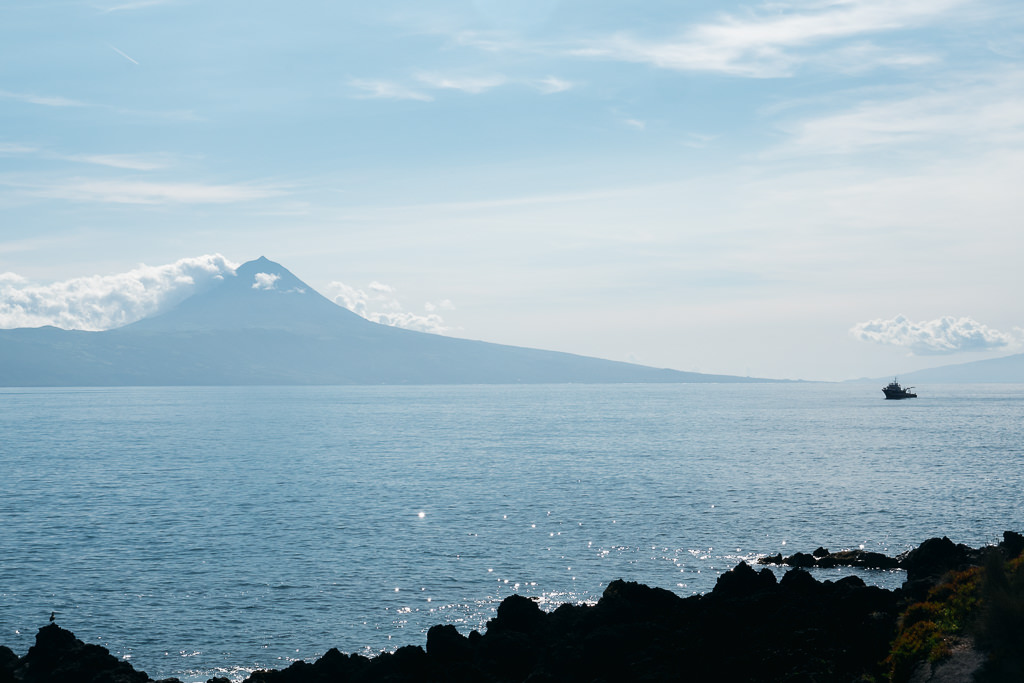 I dedicated my second day on São Jorge to hiking the trail of Caldeira de Santo Cristo, which incidentally became the absolute highlight of my stay. The path begins on the mountain plateau with a downhill walk to several fajãs lasting about three hours before ending in Fajã dos Cubres.

Despite the pouring rain and clouds sadly obscuring several of the best views, I consider this one the best hikes I’ve done in a long time, which is a testament to the sheer beauty of this island. 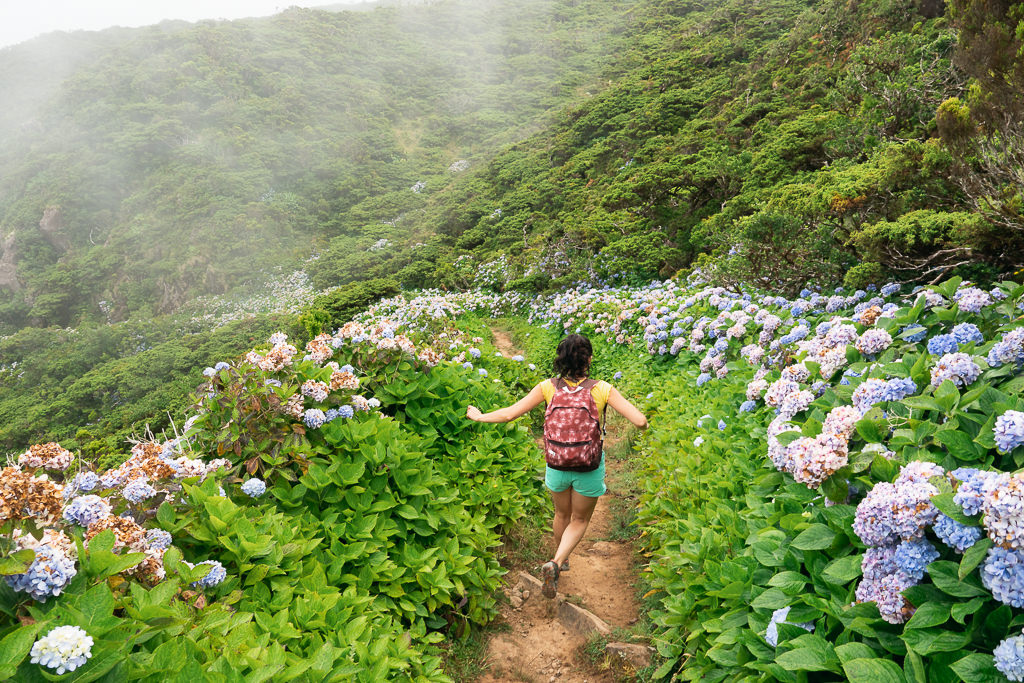 The trail passes through a variety of landscapes with some astounding fauna. The hike starts with a zig-zagging walk past cow pastures dotted with small forests filled with blue hortensias, juniper bushes, and tons of yellow ginger lilies before continuing through a lush valley with a series of impressive waterfalls.

The variation of plant life and trees makes hiking on the Azores a sheer joy. This vegetation thrives because of the islands’ varied climate and changeable weather. Still, because of its location along historical trade routes, many plant species are not native to the Azores. For instance, the yellow ginger lilies are native to the Himalayas, initially from India and Nepal; even though they are considered an invasive species, it’s still a delight to walk through a sea of these yellow flowers. 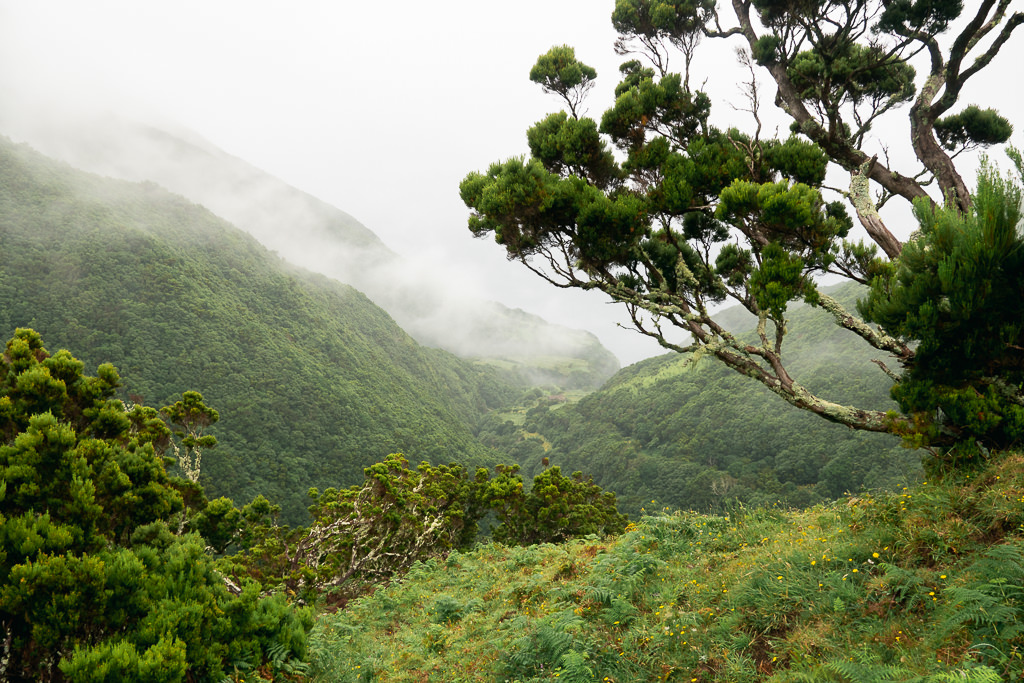 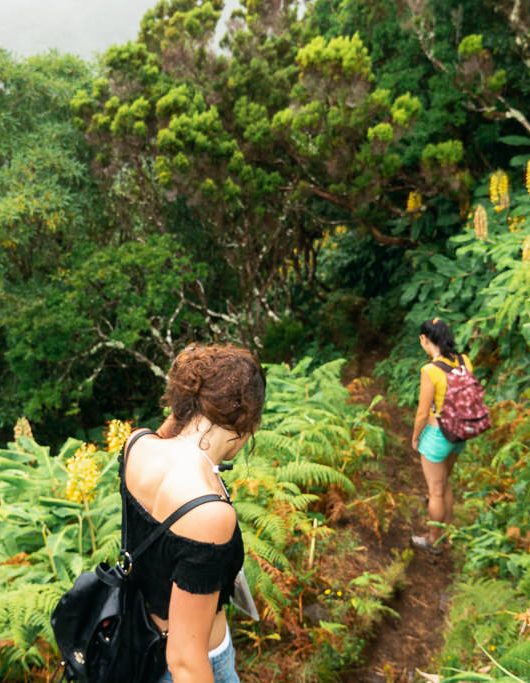 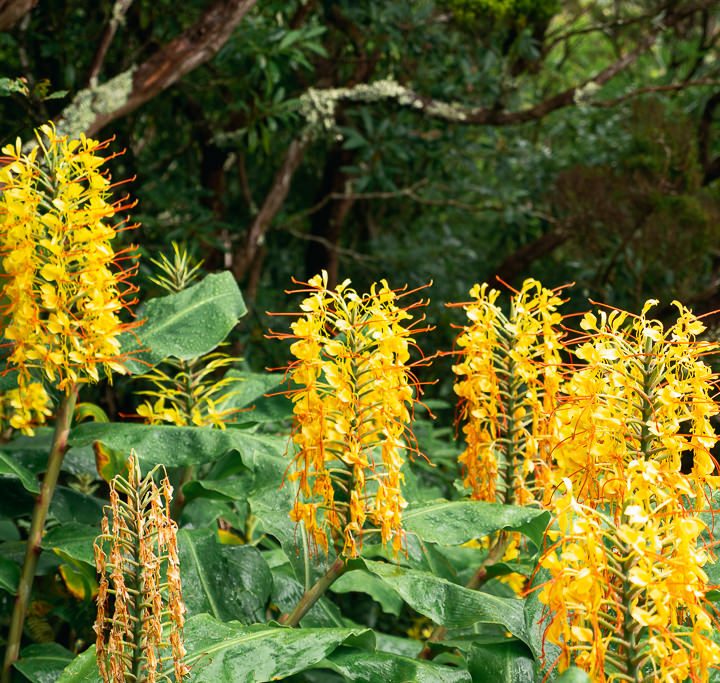 On the Azores, it is known that you can experience all four seasons in a single day. On this particular day, the weather lived up to its reputation, rapidly turning from hot and sunny to raining cats and dogs for most of the trail. Undeterred by the rain, we managed to swim a pool at the foot of one of the many waterfalls. Soon after, the forest opened up to reveal the coastal cliffs and the first fajã in the distance. 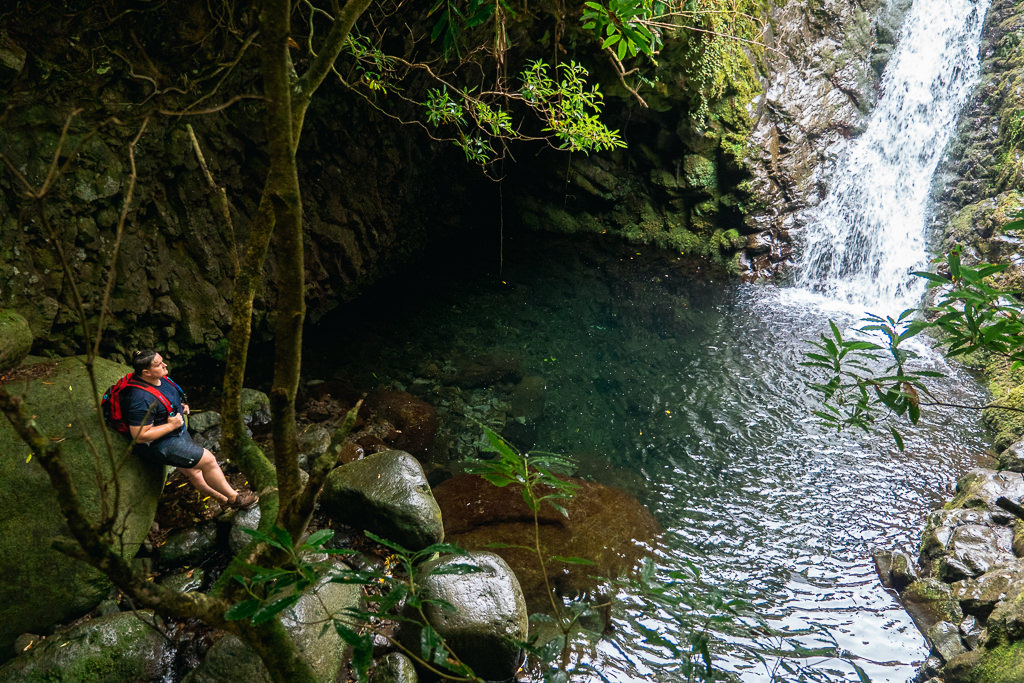 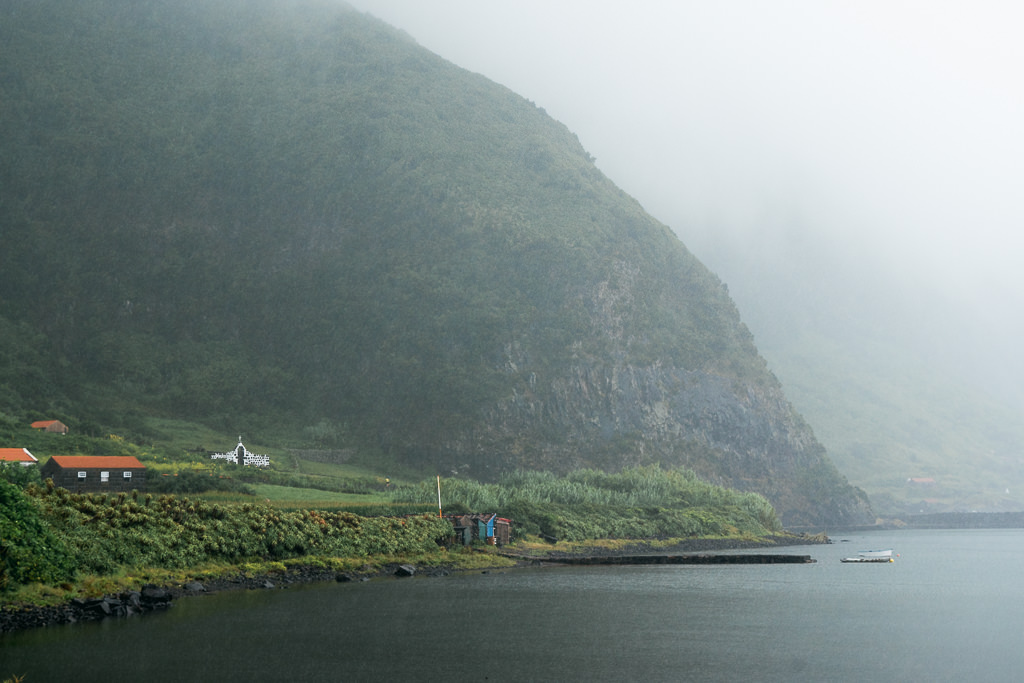 It seemed mainly fishermen and farmers living around these parts, with just a handful of tourist B&Bs dotted around. Some of the fajãs are entirely cut off from any roads, with locals using small ATVs to drive on dirt paths between them.

After passing a few more epic waterfalls cascading from the cliffs above, we found that one of the waterfalls had flooded the road due to the heavy rain, which meant we had to wade through the water to make it across. 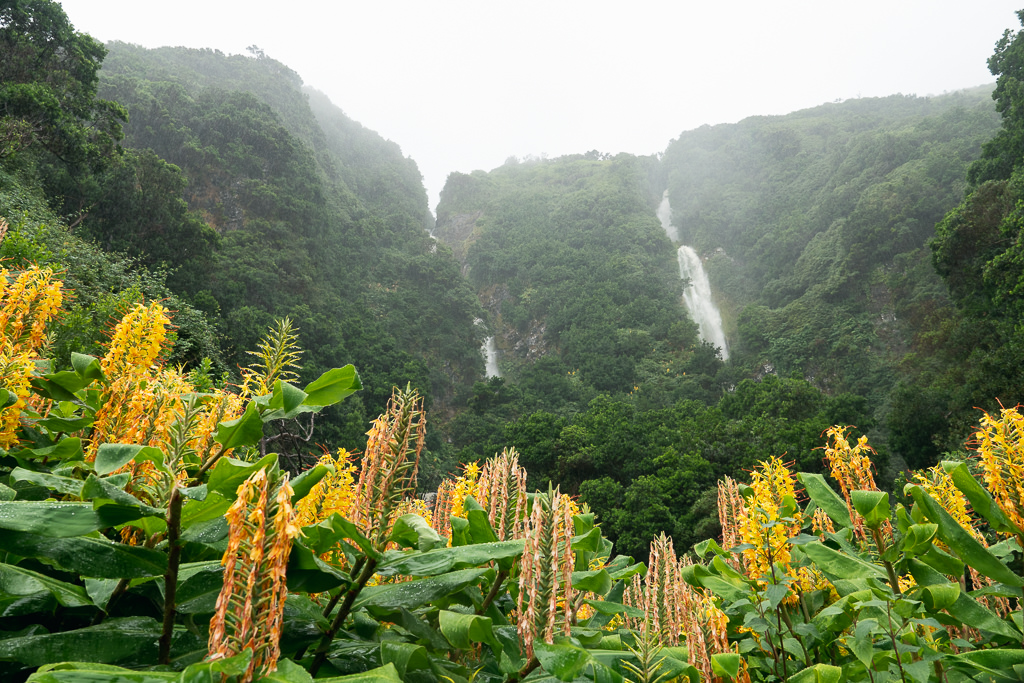 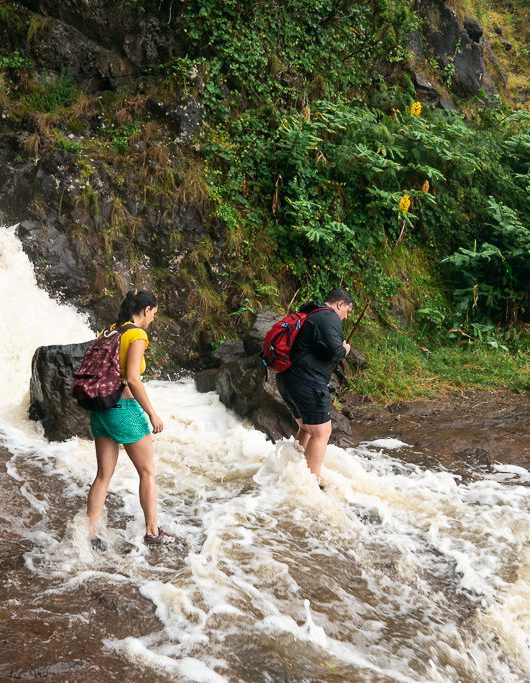 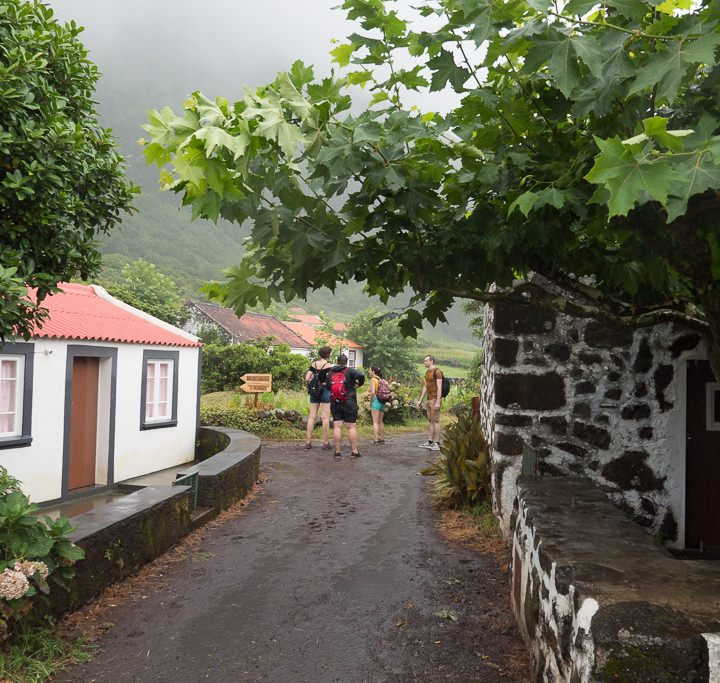 Our soaking hike was worth it, as when we had completed the trail and could finally warm ourselves in a tavern with some stiff shots of local aguardiente.

Caldeira do Santo Cristo trail
This is a linear hike of 9.5 km and takes around 2,5 hours. The trailhead is next to a parking area [map] along the main EN2 road. The walk ends in Fajã dos Cubres, from where you can call a taxi to get back to the starting point. You can find more instructions on the official site.

While São Jorge became one of my favourite places in the Azores, I should mention it doesn’t have nearly as many tourist facilities, attractions, or restaurants as some of the other islands. São Jorge is best if you enjoy straying off the beaten path for your adventures.

A day trip to São Jorge can easily be made from nearby Pico or Faial and would be sufficient if you really just want a taste. Or, you could also opt to stay for several days if you prefer to take it slow and enjoy the remoteness and quiet atmosphere. 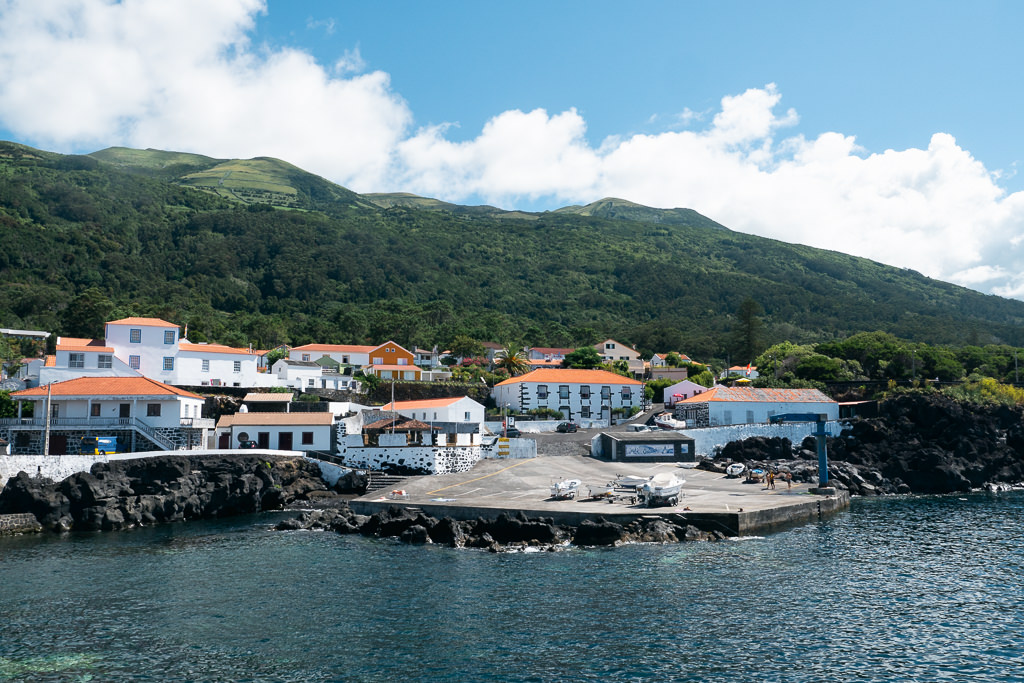 Despite having fewer tourist attractions, São Jorge is one of the greenest, most scenic, and for me, most memorable islands of the archipelago. If you’ve come to the Azores simply to see charming villages and hike in beautiful nature, then São Jorge is an island you don’t want to miss.

São Jorge does offer some more exciting activities as well. AvenTour Adventures and Discover Experience Azores offer a range of sports and activities such as canyoning, coasteering, abseiling, and rock climbing.

In the tranquillity of São Jorge, one thing to know is that restaurants are typically closed outside of peak hours. My friends and I stayed in an Airbnb in the town of Calheta, where the only restaurant closes its kitchen at 9 pm. For lunch, all we could find were some hotdogs at a minimarket. We had to drive around a fair bit several times before we finally found a seat at a table.

Initially, I thought we’d been unlucky, but then I heard that other travellers also struggled with this. So, keep in mind there are few restaurants with limited hours, so it may be easier self-cater, or at least to plan and make sure your chosen restaurant will be open. 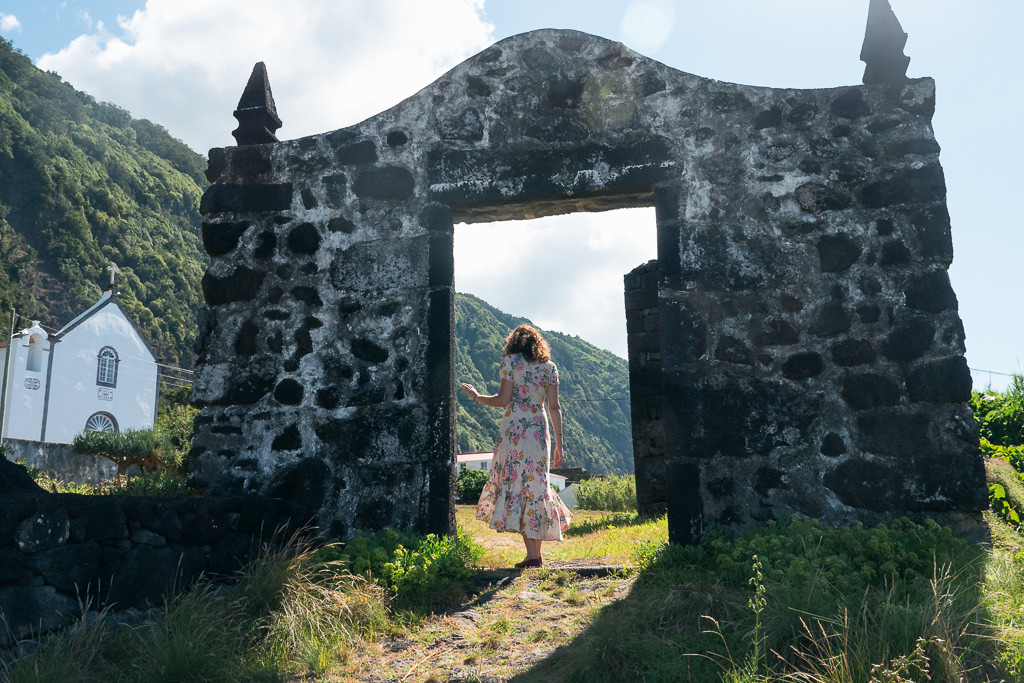 Do you need a car in São Jorge?

To explore São Jorge properly, you will definitely need to rent a vehicle. During the August high season, our compact car cost about €20 a day. You can compare car rental prices from several suppliers on DiscoverCars.com. There is limited stock on the island, so it’s highly worth booking ahead if you visit during the summer.

Where to stay in São Jorge

For hotel accommodation with access to a pool, I suggest the São Jorge Garden Hotel, which is in the main town of Velas. You can check availability on Expedia or Hotels.com.

If you’re looking for something a little more upscale, check out the gorgeous boutique hotel Quinta da Magnólia (view at Expedia, Hotels.com or Booking). It’s in a village a little drive further down the coast.

For holiday homes, apartments, or cottages, my favourite booking site to check is Booking.com, or you can browse around using the map below.

Where to next? Read more about Pico Island, which is just opposite of São Jorge, and home to wineries, lava caves, and the Azores’ tallest peak. 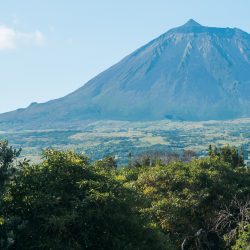 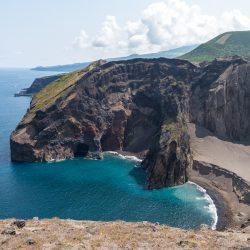 10 Fantastic Things to do on Faial Island, Azores