In one of SE Asia's last unfragmented rainforests, I find a rare ecotourism success story 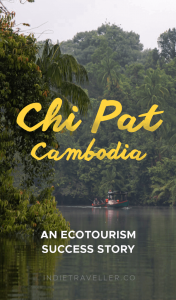 The Cardamom Mountain region in Cambodia contains one of the last unfragmented rainforests in Southeast Asia. It’s one of the world’s foremost biodiversity hotspots — and a place where wild elephants still roam free. I recently visited the Cardamom Mountains on a 3-day trekking tour, which was arranged by Rickshaw Travel.

It was not only an amazing wildlife experience, but I also felt immensely happy to be there as a tourist, knowing that my presence was contributing to something good.

You see, conservation and sustainability are often among the lowest priorities in Cambodia. All around the country, I kept hearingstories about illegal logging, mining, overfishing, and slash-and-burn agriculture. It’s disheartening to hear from so many locals and expats about the countless environmental (and political) problems facing the country.

But in the Cardamom Mountain region, some people are fighting the good fight. And against all odds, they seem to be winning.

Reached by a three-hour boat ride up the Piphot river, the Chi Pat community-based ecotourism project makes for an unlikely success story in Cambodia. The project has managed to reduce forest burning by 100% and hunting by 80%, among other victories. 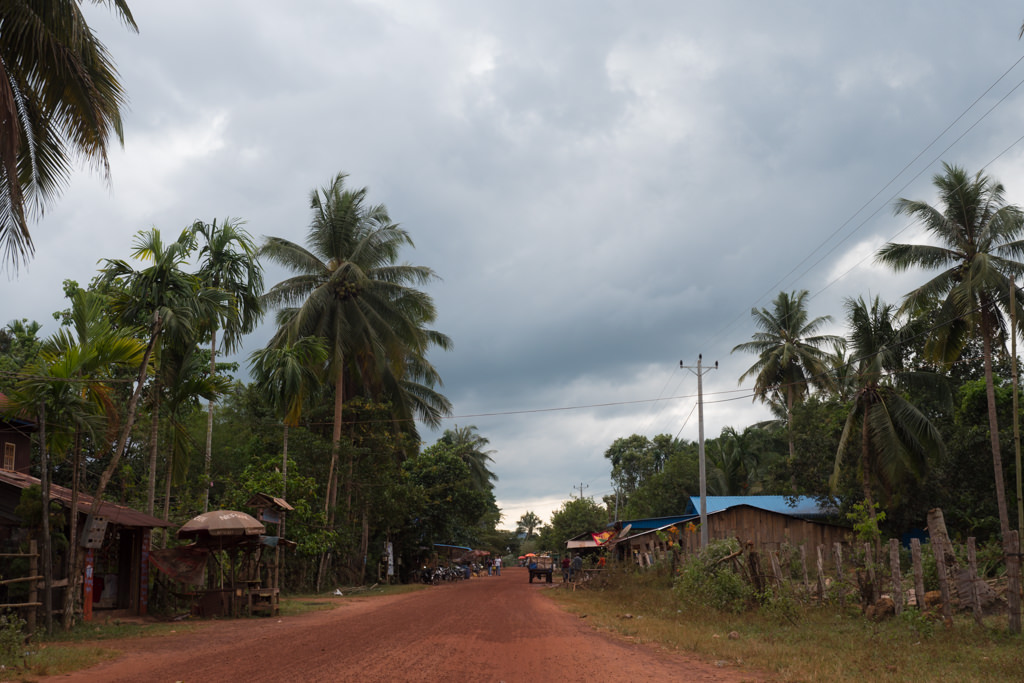 “When we started ten years ago, the people in the village really had to be persuaded,” I’m told by my Khmer guide.

They hadn’t been apprehensive about welcoming visitors, mind you. The villagers just didn’t think people would come. To them it was just an ordinary village in the forest.

But these days ecotourism is fully understood and embraced. “I hope that one day Cambodia will be like Costa Rica”, my guide said, referring to a country that’s often regarded as a textbook example of sustainable ecotourism. Even though that is surely a very distant dream, hearing such words made me smile.

It’s obvious why many travelers do come to see this beautiful place. During my stay in the Cardamom Mountains, I not only experienced some of my best jungle trekking, but also found a lovely little slice of Cambodian village life.

My trip began at a bridge somewhere along the road between Sihanoukville and Koh Kong. From there, a long-tail boat took me onwards to the isolated village of Chi Pat. My boatman was a local fisherman, one of many who gain extra income from ferrying tourists to the village. The Chi Pat project (which is backed by the Wildlife Alliance NGO) not only protects the forests, but also provides sustainable livelihoods to many people living in this area. 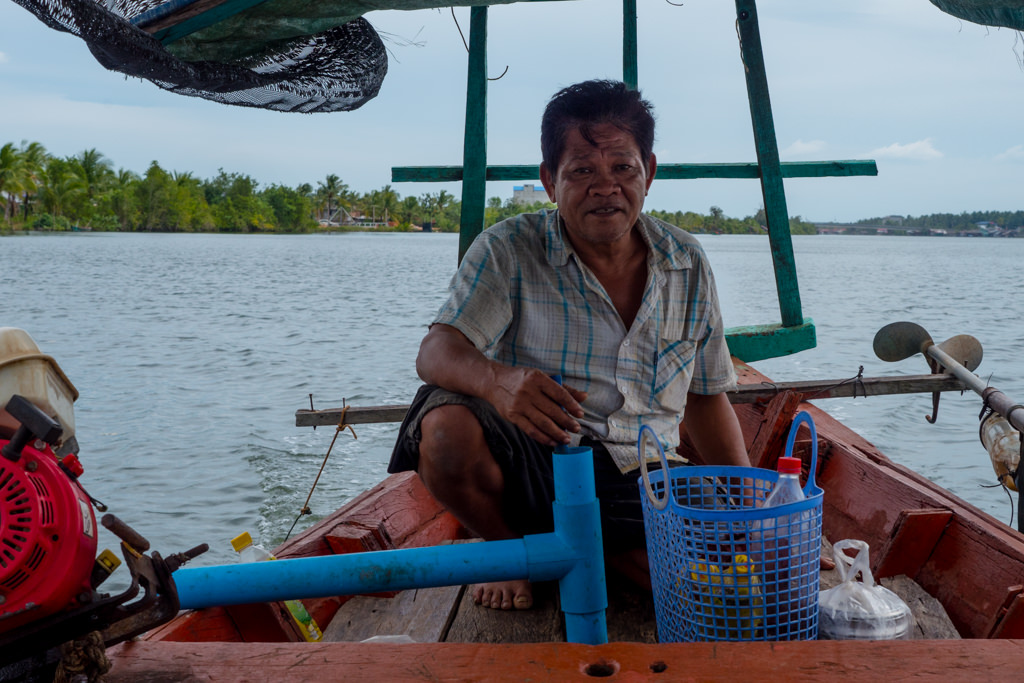 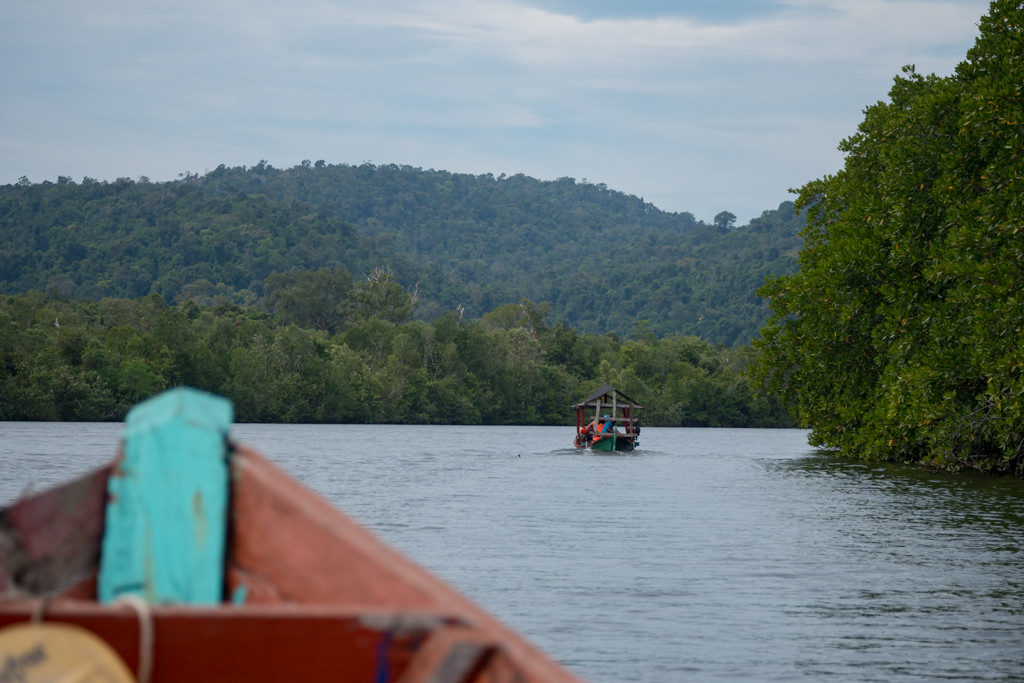 Passing forests, mangroves, and the odd fishermen’s huts on stilts, we eventually docked at the village. It was there that I first met my guide Vanak, a young and inspiring fellow who learned fluent English just from speaking to tourists. When he’s not working as a trekking guide, he also runs the Sun Bear Bungalows with his sister. He started a few years ago with nothing but the dream of having their own business and a pile of bamboo; now it has half a dozen lovely bungalows.

The first day of my tour normally involves some cycling and sunset watching. But since it was quite cloudy, we checked out the nearby river instead, which had wonderfully clean water. A man there was washing himself top to toe, then did the same with his motorbike. It seems this river can be both a bathhouse and a car wash. 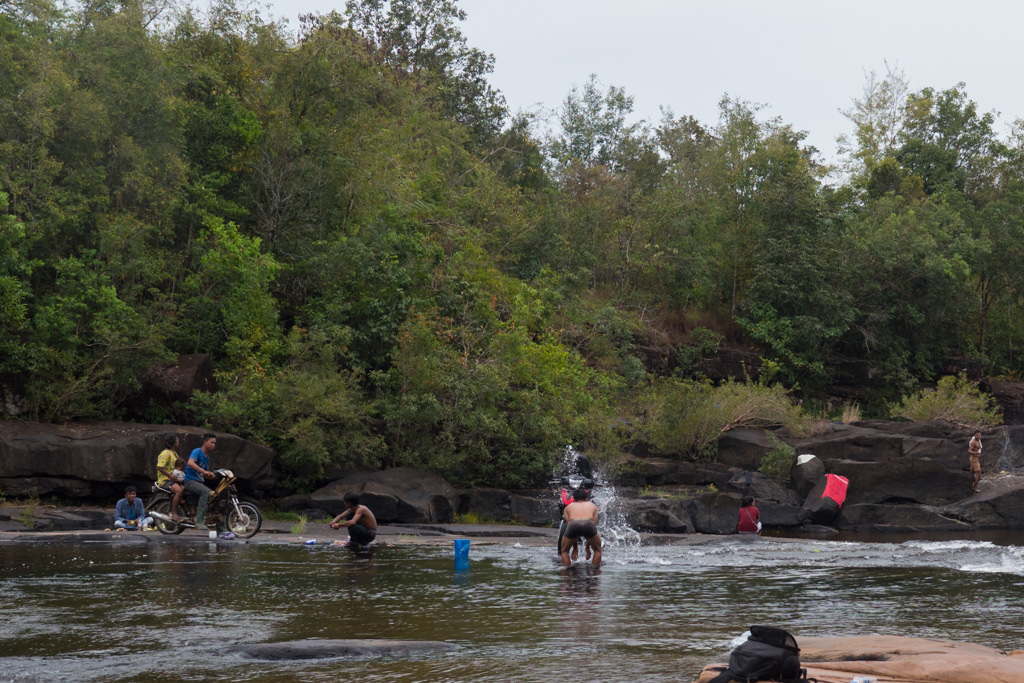 Rain started to drip, so we took shelter at a local food shack. I had a ‘medium spicy’ papaya salad, which was actually the spiciest thing I ever ate. While struggling to hold back my tears, some locals gestured us to join them for some beers with ice. I welcomed the chance for a chat as well as to extinguish the fire.

The locals were actually some of the forest rangers kicking back after a long day on patrol. Many of the rangers here were once poachers, but they now work to protect the forests. It makes sense: who better to hunt the hunters than former hunters? 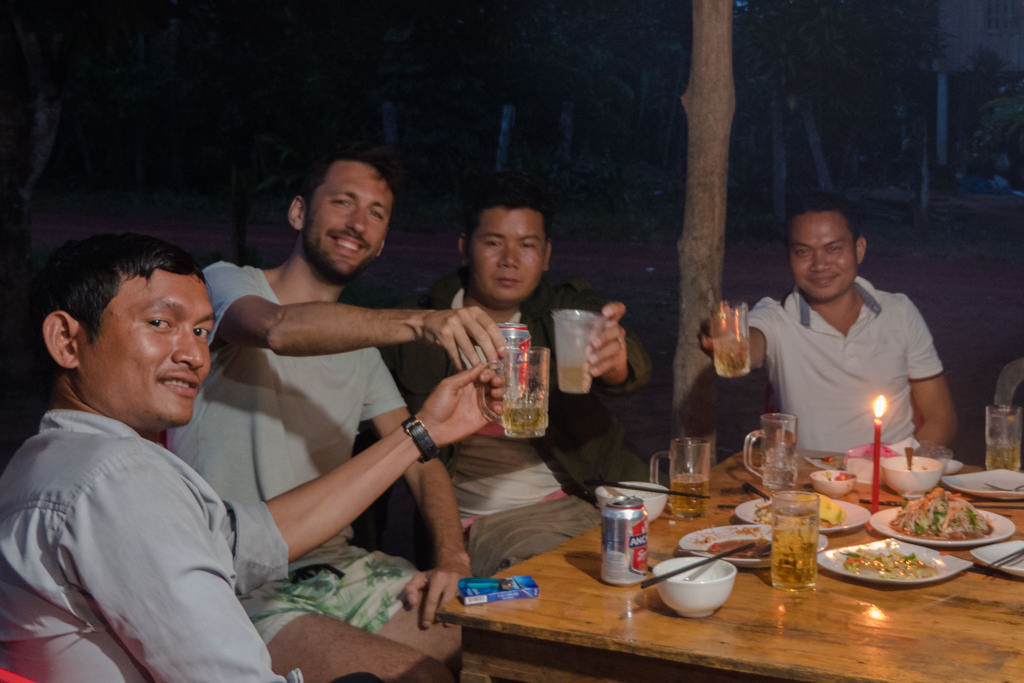 The rangers taught me how to say cheers in Khmer (“Chol mui”). But to everyone’s amusement I totally messed it up, and instead I cheerfully told everyone to fuck off (“Choi mul”). Thankfully, I’m forgiven, and our round of drinks is followed by another.

Going into the jungle

The next day starts with breakfast at the community center, where a rotating crew of 85 women (in a village of about 1000 people) prepare meals for the visitors.

We head out on a long-tail boat deeper into the forest, where we cut the engine and switch to a rowboat for a better chance to see animals. It’s still misty, giving the jungle a spooky vibe. 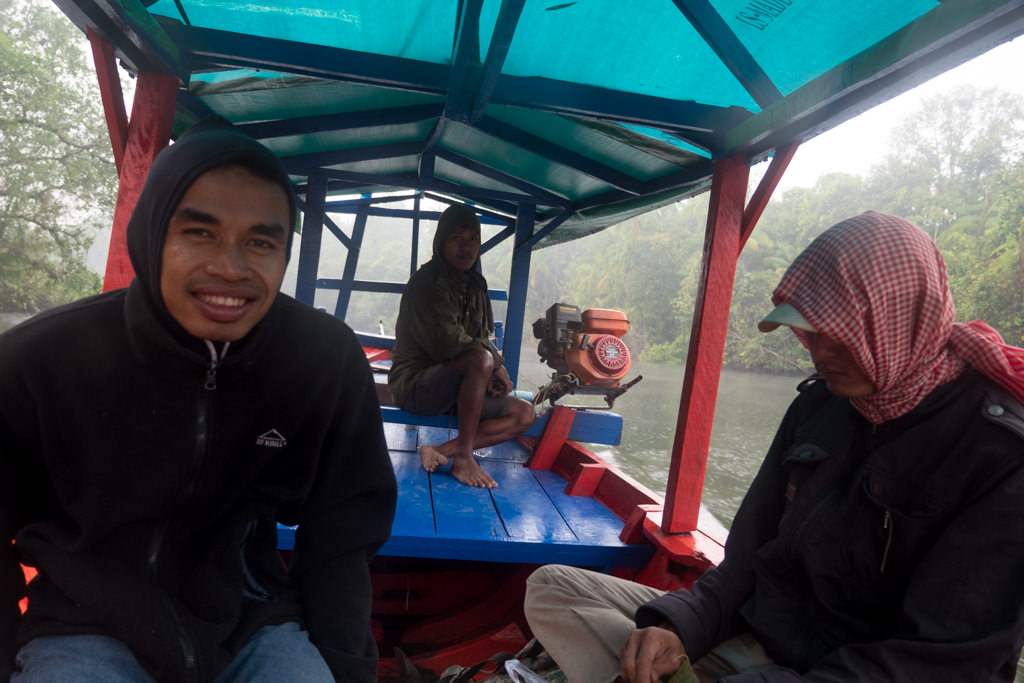 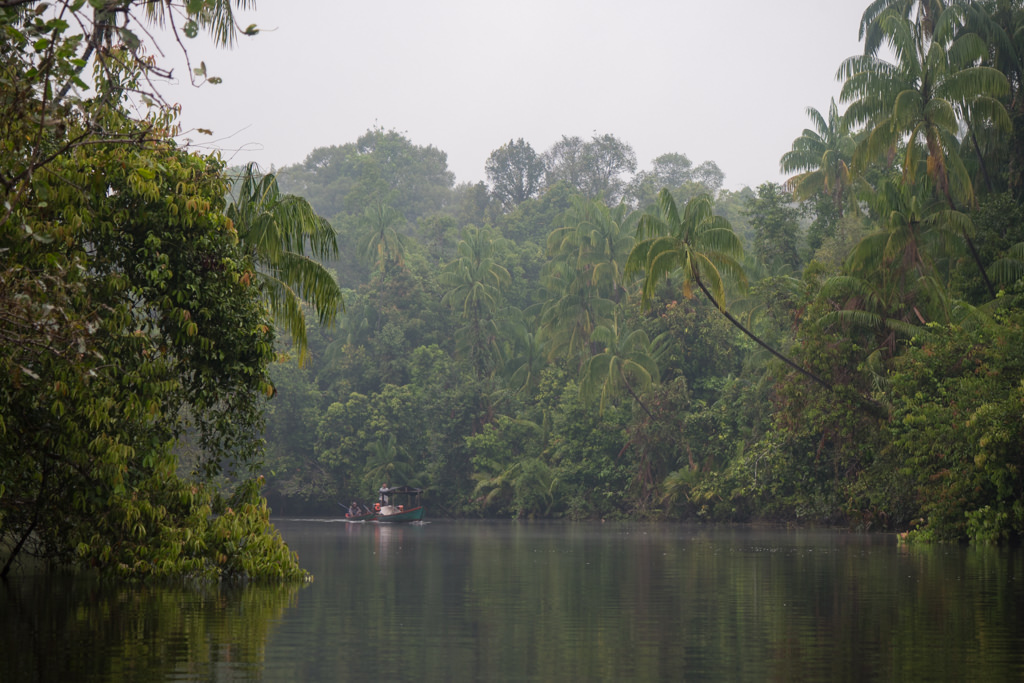 Despite the poor weather conditions, it was easy to spot many creatures. Colorful kingfishers sat on branches along the riverbank. Giant black squirrels scurried around the trees, while some monkeys swung around the distant canopy. We docked at a bird-viewing platform, where I spotted several toucans. 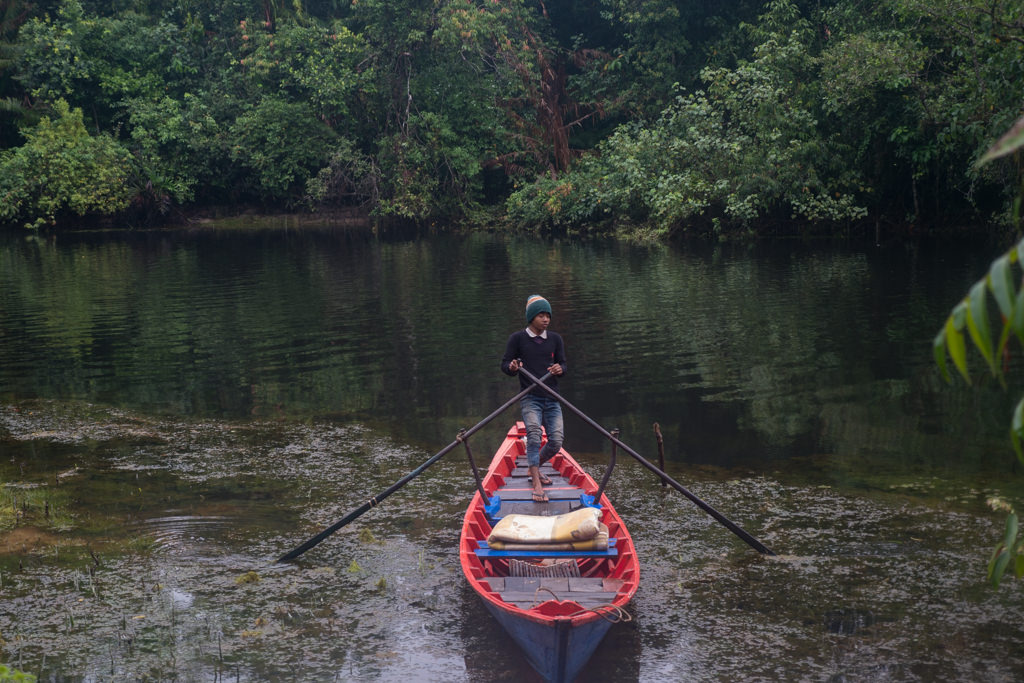 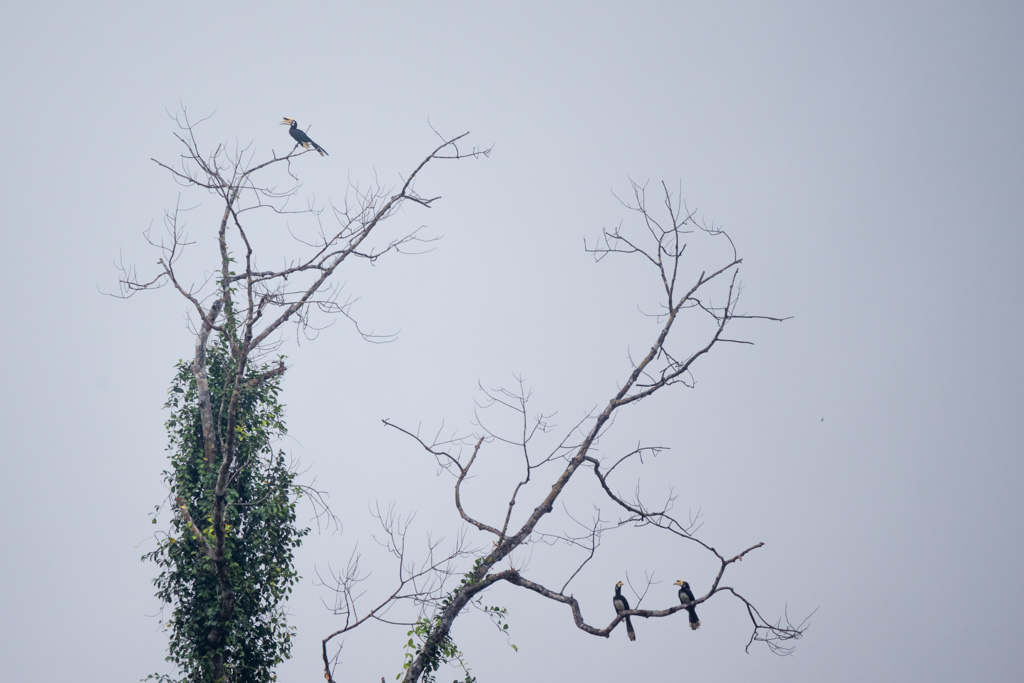 We then followed a path weaving through dense jungle. Occasionally, I heard a deep ‘shwoooo shwooooooo shwooooooooo’ sound. It struck me as a totally fake sound, like something a sound editor might layer onto a movie to create suspense. Actually, these were some great hornbills flying overhead and flapping their huge wings. Me and my fellow travelers looked at each other in amazement.

At the end of the day, we stopped at a camp where we put up our hammocks. I dried my soggy socks over the campfire. Later we had a tasty pumpkin and cabbage soup.

After darkness fell, our guide entertained us by conjuring various snakes and small tarantulas from around the camp. No worries though; you’re sleeping in a totally covered hammock on a platform, so you won’t be joined by any creepers. I’m pretty sure, anyway. 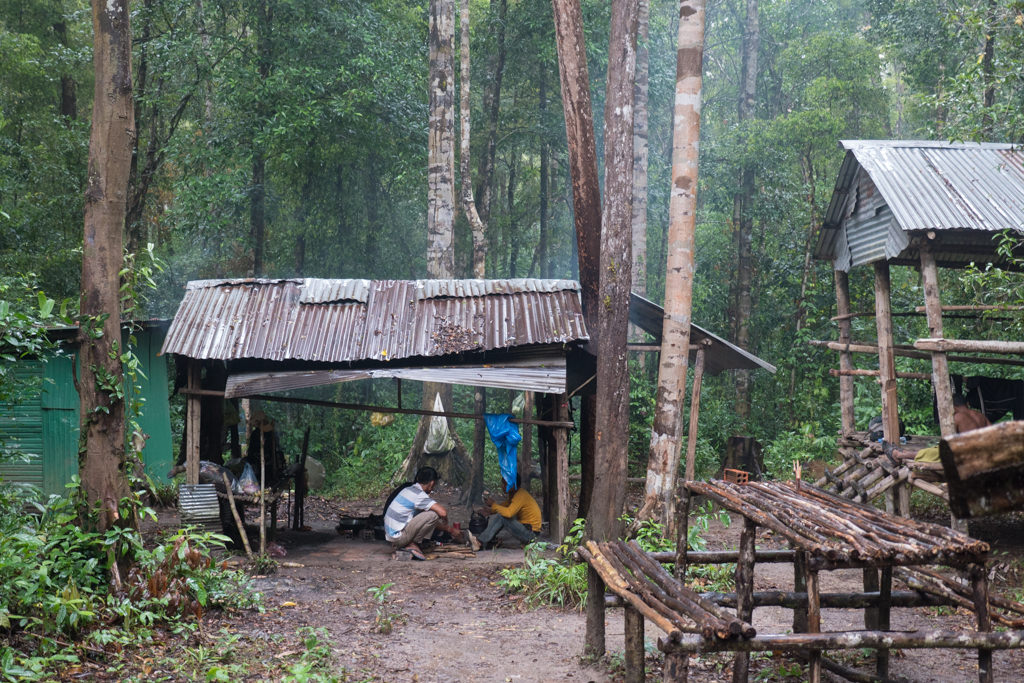 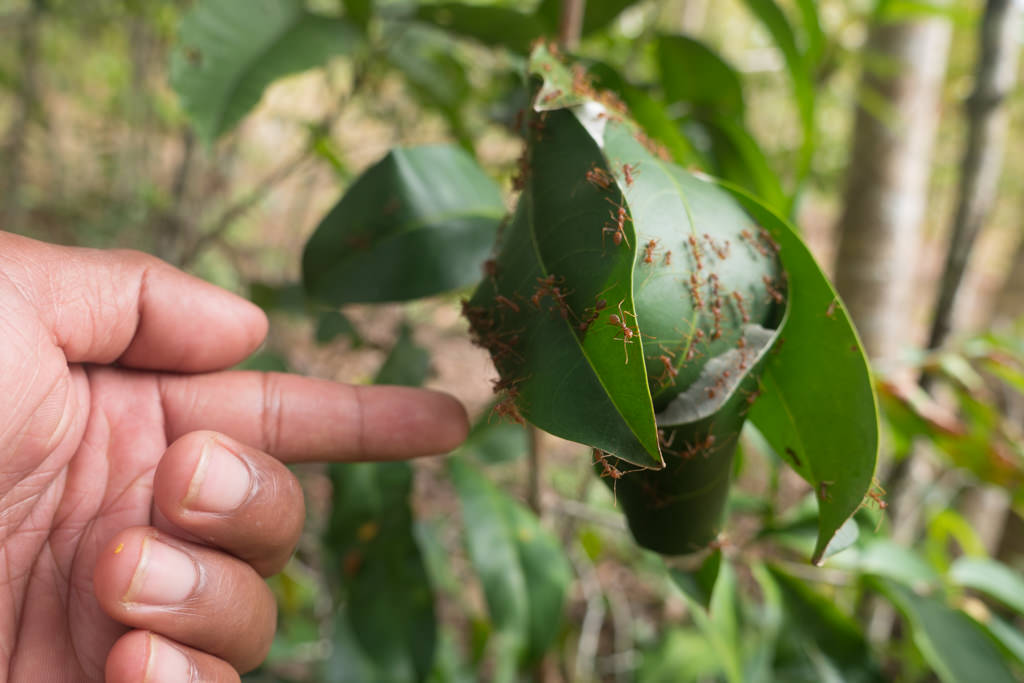 These ants build cocoon-like nests inside the leaves

I woke up the next morning to the song of gibbons.

You truly can’t ask for a better start of the day. I spent some time quietly sipping my coffee by the river as I listened to all their joyful whooping.

After breakfast, we hiked further into the jungle and on to a savannah-like clearing. There we found wild pig tracks and elephant dung. While rarely sighted, several hundred Asian elephants still roam these parts. There has been zero elephant poaching since 2006, in part thanks to the project. 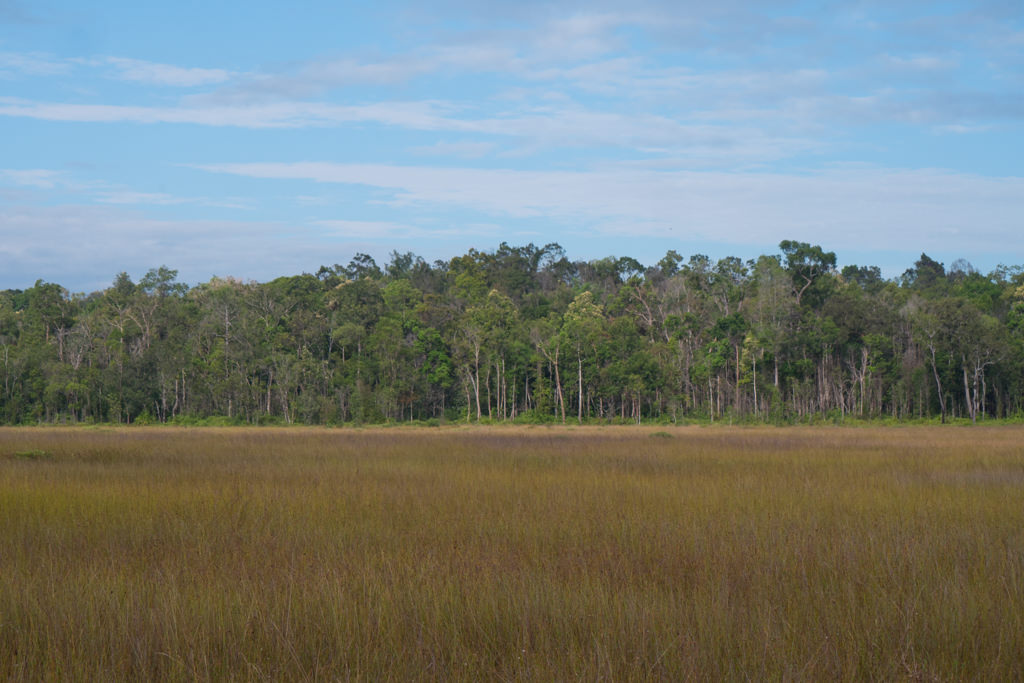 A few hours later we emerge from the thick jungle, stopping in some scrubland on a hill overlooking the valley below. We snack on some green mango with sea salt and chilis. It’s very tasty, and feels a bit like eating a margarita. 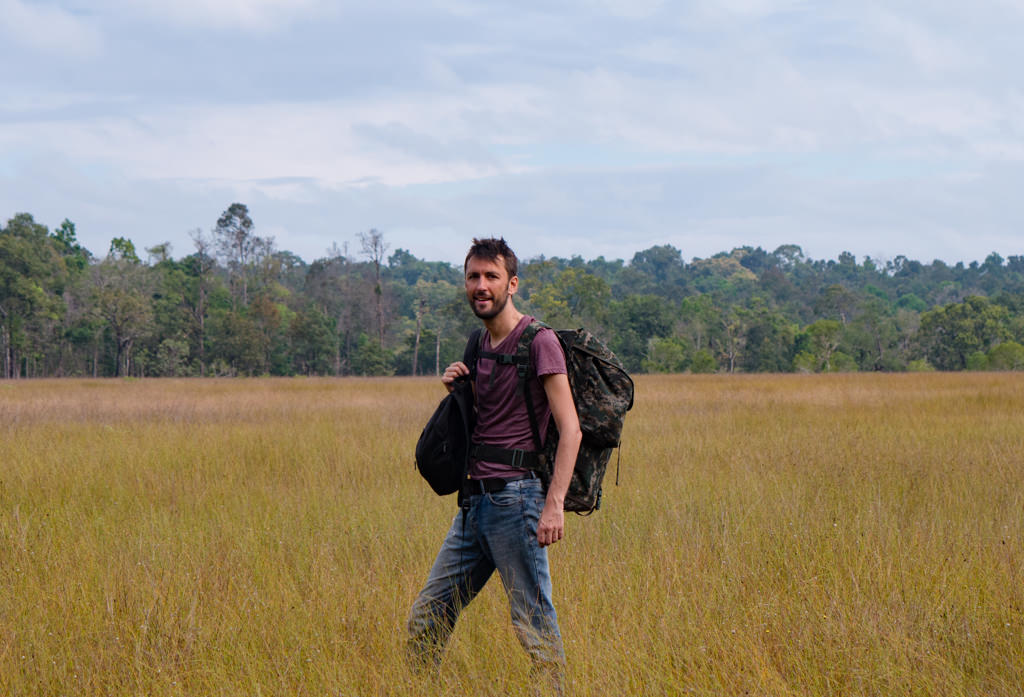 During our break, my guide tells me more stories of the work being done here. Recently, a man was caught by rangers and went to jail for one year for illegal teak wood logging. For a while, 5000 hectares were under threat from a potential sale to a Chinese mining company, but intense lobbying from the locals put a halt to the concession. Plans for the construction of a dam inside the park were cancelled as well, so it seems the government has actually been persuaded to preserve this national park. Meanwhile, the ecotourism project recently expanded into a second area. 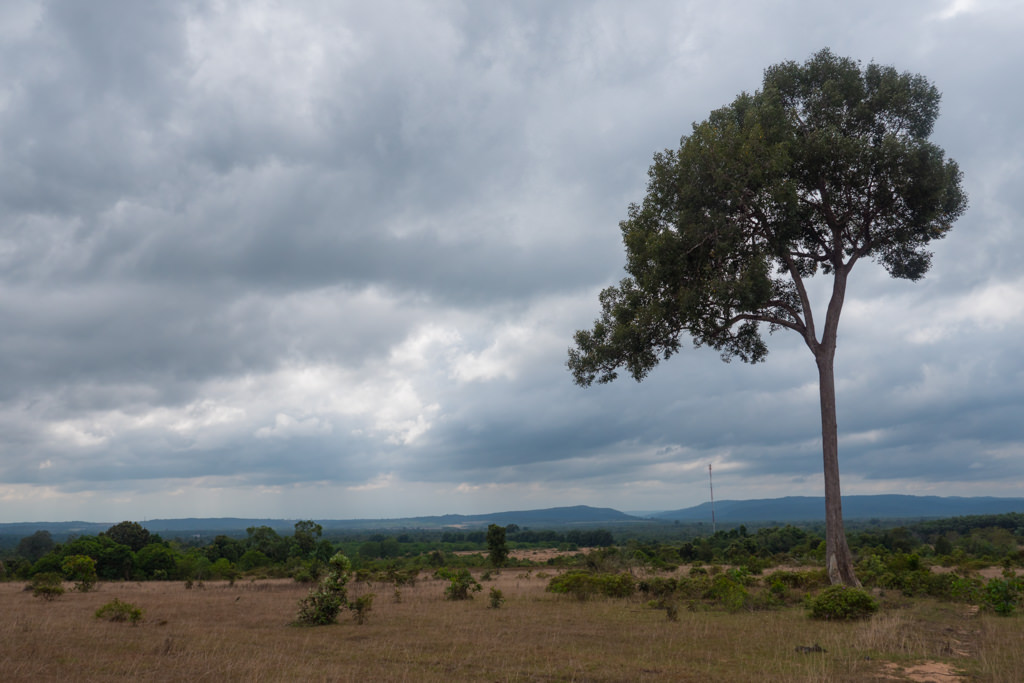 An area once destroyed through slash-and-burn agriculture, now slowly recovering

The scrubland in which we had our break also tells part of the story. This was once jungle that got burned down for farming, but now it’s part of a forest regrowth project. Trees were re-planted here eight years ago, and now the landscape seems on the way towards being a forest again. It’s the tourist income that helps to fund these programs. 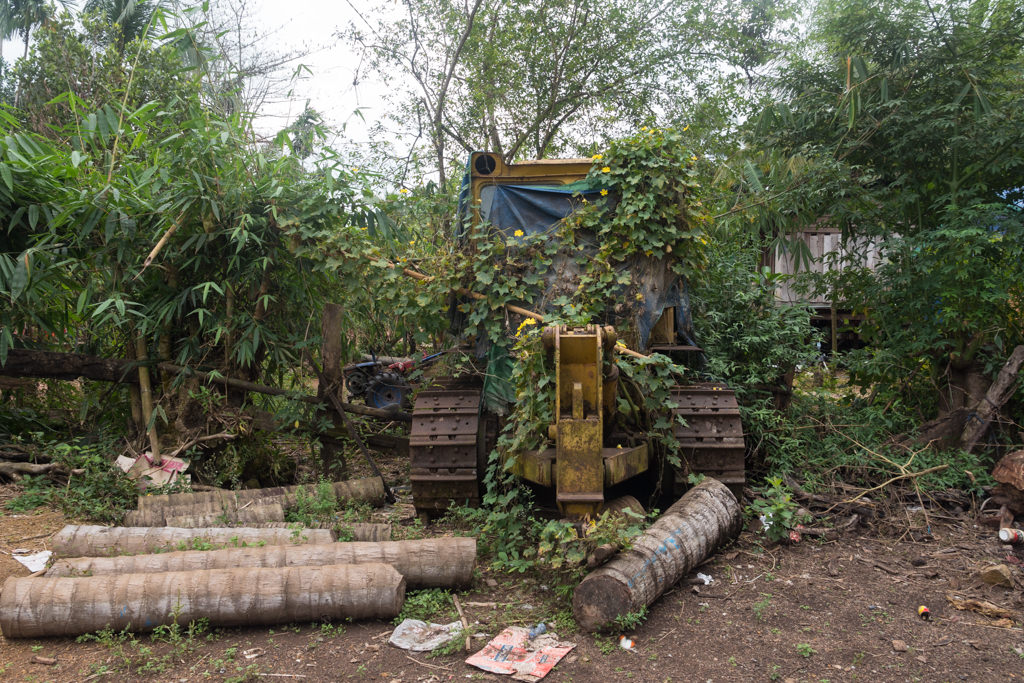 A few more hours later, we arrive back at the village. We stop on the outskirts for a meal at our cook’s home. In his garden, I notice a bulldozer that seems permanently stuck in the bushes.

“Oh, that came here to build a road for a factory,” my guide said. “But they didn’t build the factory and now it’s abandoned.”

The bulldozer now sits there, overgrown with vines and claimed by nature.

How: While you can book activities on-site, it’s recommended to book your trip ahead of time. This ensures that a boat will pick you up to take you to Chi Pat (as there is no public transport) and the only way to be sure of getting an English-speaking guide. I did a 3 day / 2 night trip via Rickshaw Travel which includes accommodation, meals, transfers and tours as described, and an English-speaking guide. (The Cardamom Mountains trip is included in Rickshaw’s A Taste of Cambodia itinerary. You can also combine it with other bite-size trips to create your own custom Cambodia itinerary.)

Good to know: the region is called the Cardamom Mountains, but it’s mostly flat land and gentle hills around here as Chi Pat is in a valley. This does make for easier trekking. There is no ATM in the village, so be sure to bring sufficient cash. 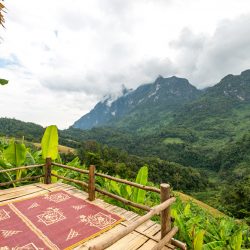 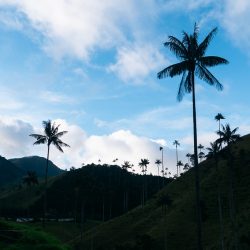 Salento Is Overcrowded… But Here Are 3 Secret Alternatives