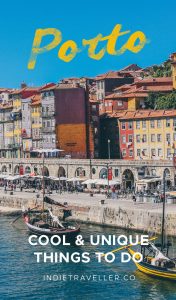 With its narrow tiled buildings wedged on river hillsides, a gorgeous waterfront, and tons of cultural attractions, Porto is a destination you don’t want to miss.

The city feels down-to-Earth and more working-class than Lisbon — and some say the people in the north are more open and welcoming. In any case, there are numerous things to see and do in Porto, making it a perfect city break or a fantastic stop on any trip through Portugal.

Photos are from my visits in winter, autumn, and summer.

Plan and book your Porto trip 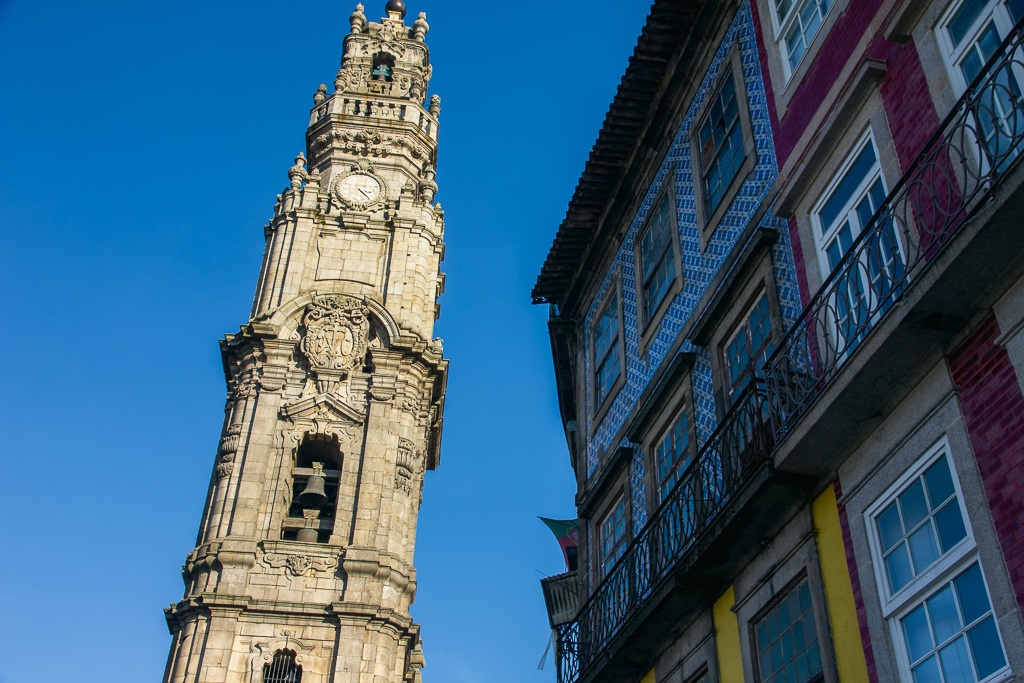 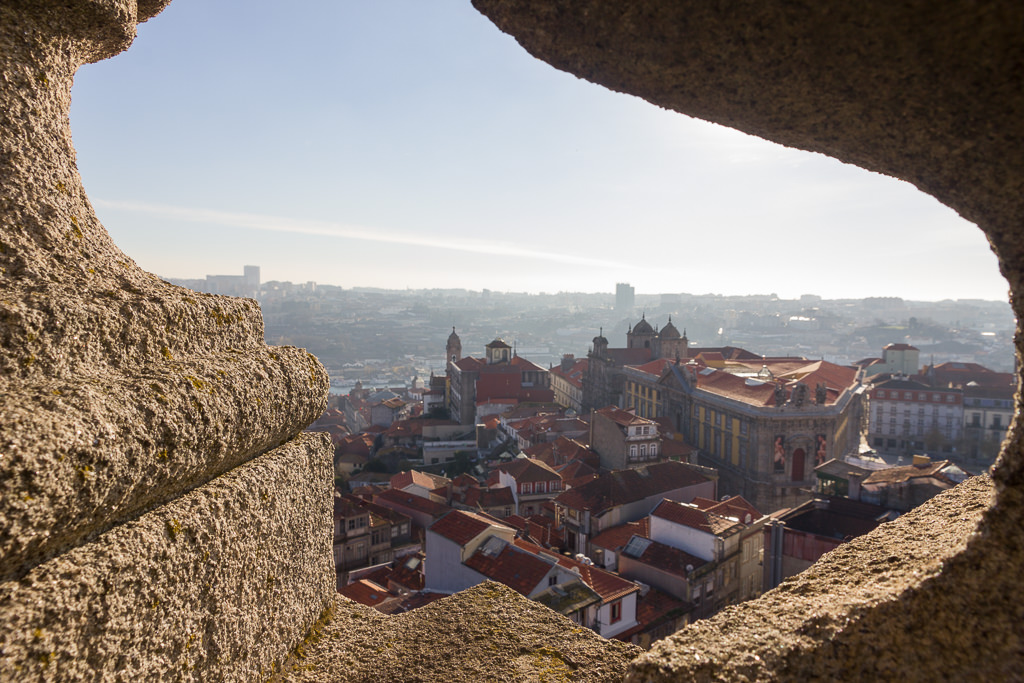 The top of this narrow baroque church tower provides the best vantage point of central Porto. I suggest making this your first stop, as the sweeping views give you a great preview of the city.

While you’re here, check out the adjacent Praca de Lisboa, a wonderful square with two levels: it has shops and cafes on the lower level and a public green roof with olive trees on top. 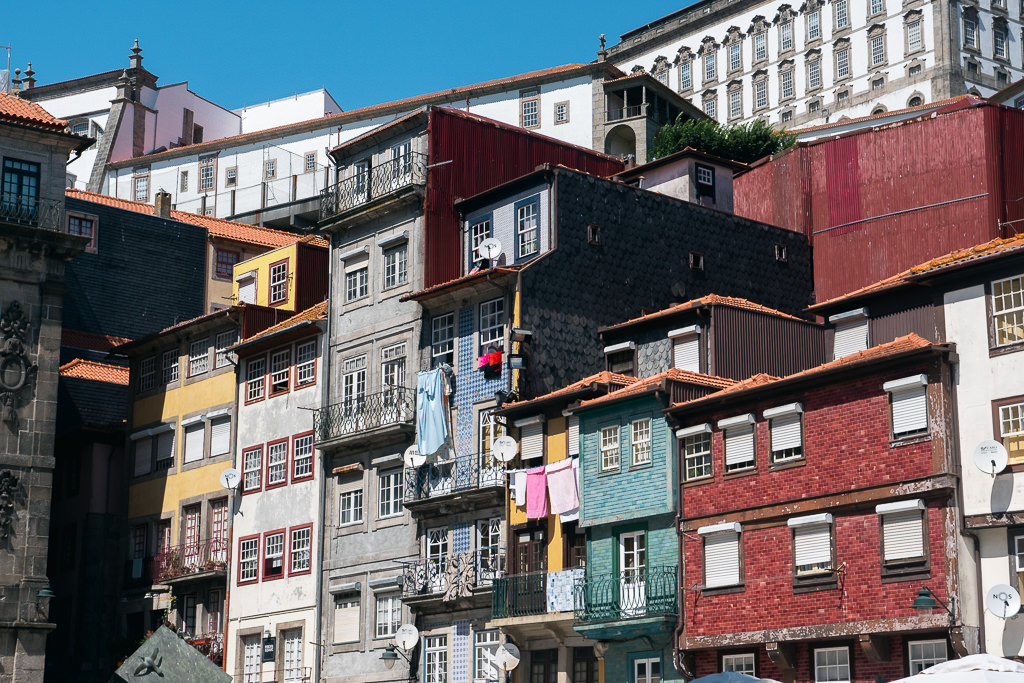 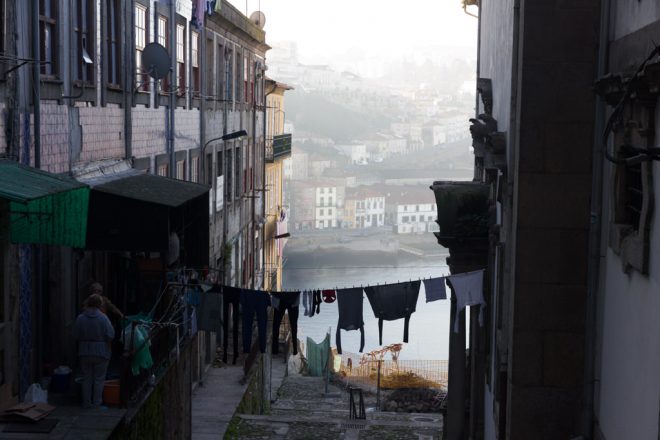 The Ribeira neighborhood sits right along the Douro river and is one of the oldest parts of the city. Famed for its narrow and colorfully tiled dock-side houses, as well as its views of the iconic double-decked Dom Luís bridge, this UNESCO World Heritage Site is simply a must-see.

For a true taste of Porto, be sure to also explore the warren of windy streets behind the riverside. As one local told me, back in the day “you couldn’t go there at night without losing your dignity”, but nowadays there isn’t much to fear from dipping into this little labyrinth of backstreets. 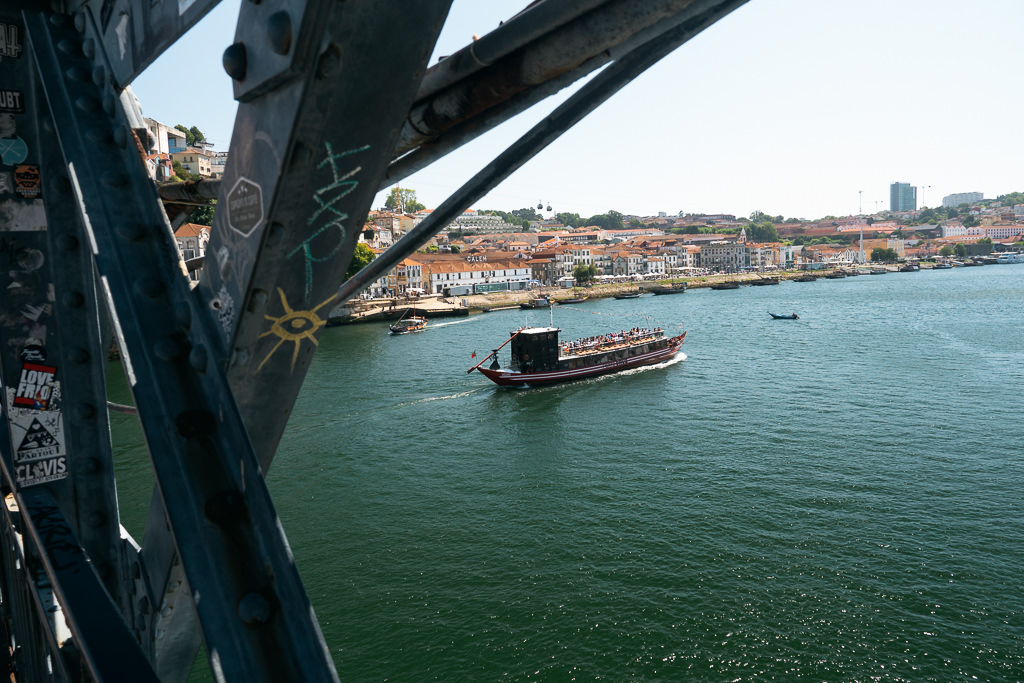 One of the most popular things to do in Porto is to take a cruise along the Douro river. You can choose from two types of river tours.

The longer ones take a full day and go all the way out east to the Douro valley, the region that birthed the famous Port Wine. You’ll pass by many cute villages and green vineyard-clad hills. You can book a Porto – Douro Valley cruise on GetYourGuide.

A quicker option is to take a one-hour tour along the Douro within the city, passing by all of Porto’s six bridges and going up to the mouth of the Douro river. These tours are typically on smaller traditional boats once used to transport Port wine barrels.

Book this trip: reserve your spot for a river cruise by booking it at GetYourGuide. Includes breakfast and lunch on board. 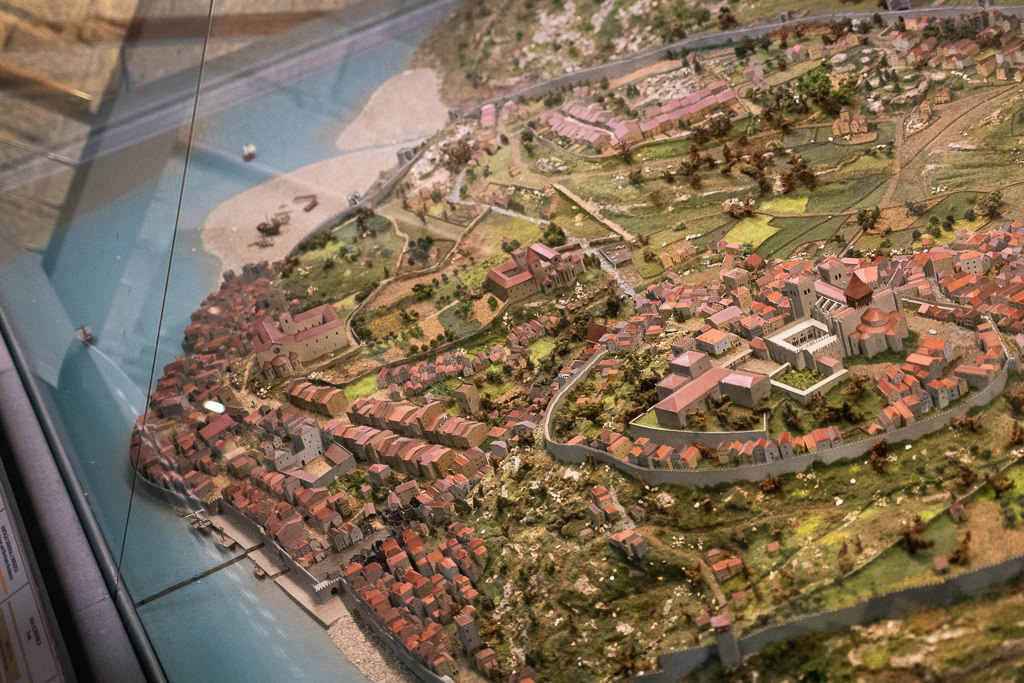 The Museo da Cidade (city museum) is can be found close to the docks, based in what was once Porto’s customs house. It’s in this building that goods arriving in Porto were inspected, weighed, and taxed.

The small museum will give you some wonderful insight into Porto’s history, going as far back as Roman times, as well as the Portuguese age of exploration and the city’s role during this time.

5. See the Igreja do Carmo (a conjoined church) 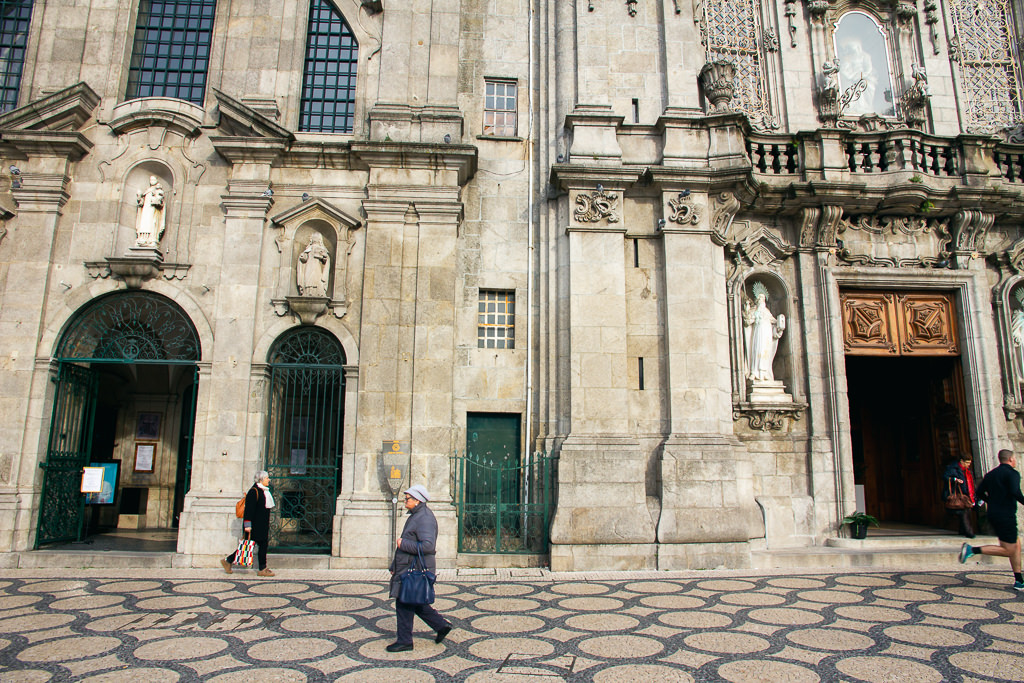 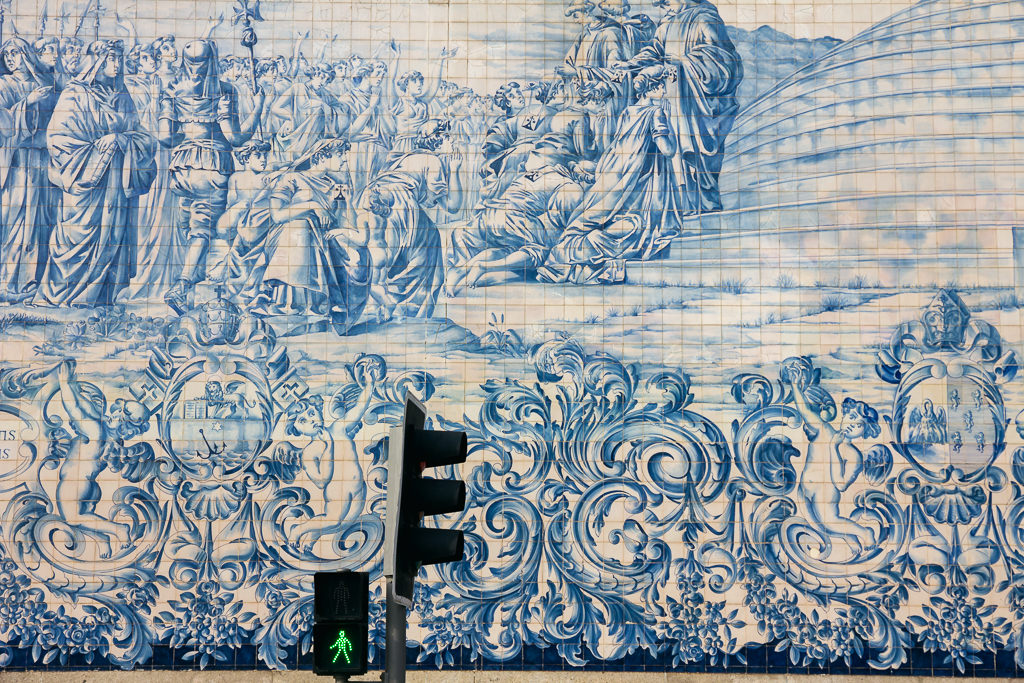 This church is interesting not just for its spectacular tiled murals, but also for its unusual construction. Look closely and you’ll notice it’s actually two adjacent churches which have been sort of merged together.

Apparently, there was some complicated rivalry between these churches. Due to a law stipulating that no two churches may share the same wall, a tiny house was constructed in between them. You can still see the 1m wide house wedged in there with its own little front door. Someone actually lived there until about 20 years ago!

Looking for a more guided experience in Porto? Then I recommend adding one of these trips from GetYourGuide to your itinerary: 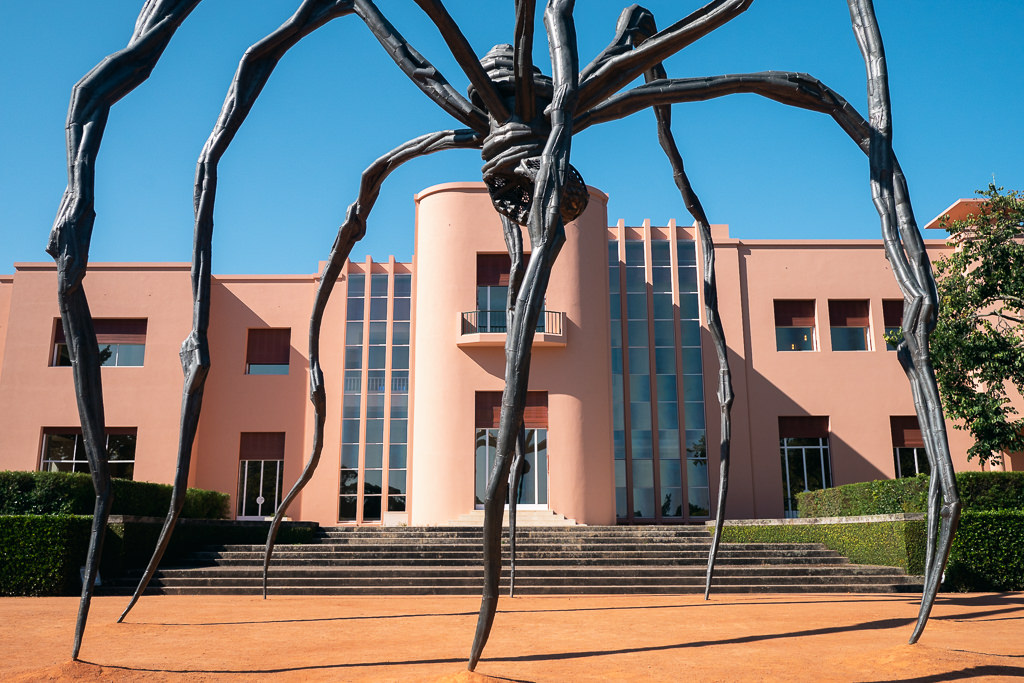 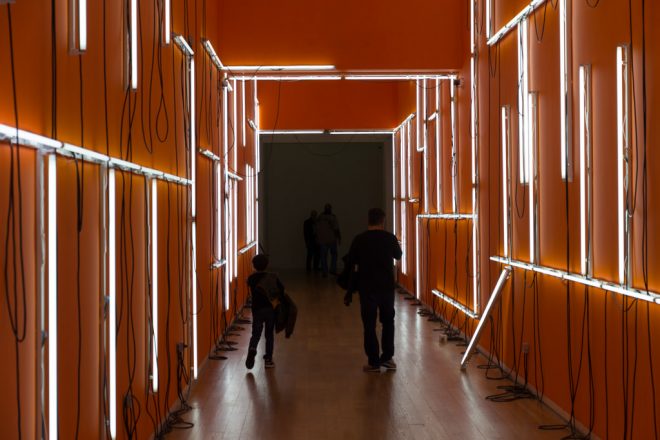 The Fundação Serralves museum hosts various exhibitions focusing mainly on contemporary Portuguese artists. The art is intriguing, but so is the museum’s minimalist architecture, not to mention the surrounding sculpture gardens and parks with a treetop walk. It’s a little bit outside of the old center but worth getting to. 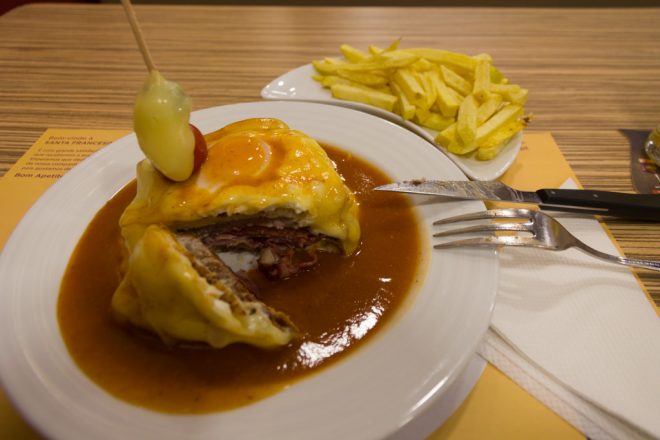 The francesinha is the typical Porto dish, consisting of multiple layers of beef, ham, bacon, sausage, egg and dough, drenched in tomato and beer sauce, and served with fries.

Yes, it has about as much subtlety as a British builder’s breakfast, and no, it’s not a particularly light meal. But maybe, if he visited Porto, this is the sort of thing that a tipsy Anthony Bourdain might call a guilty pleasure. If you’re going to do this, do it on a very empty stomach.

The restaurant where I got mine didn’t forget about the vegetables, as they toothpicked a single token cherry tomato onto my epic layer cake of meat. (It was drenched in melted cheese, of course.) 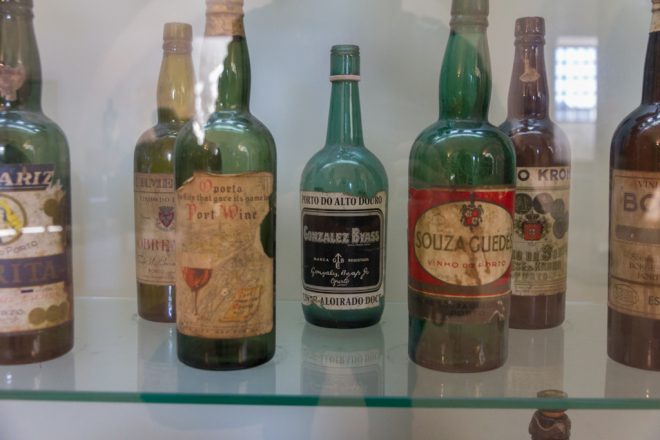 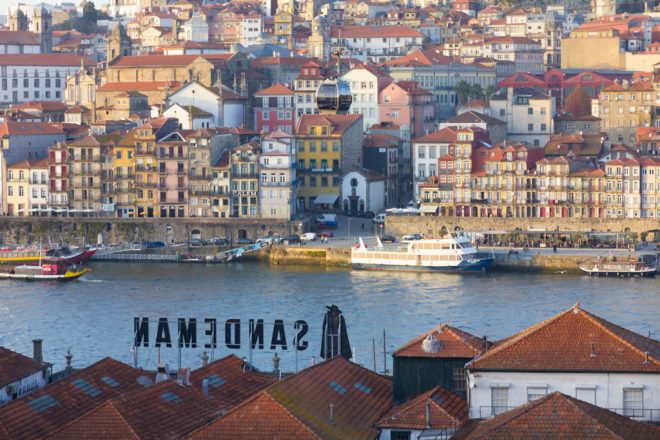 Porto is of course the origin of… port wine! Just on the opposite side of the river in Gaia, you’ll find all of the old warehouses and major cellars for the famous fortified wine.

You can get wine tastings and guided tours at almost all of these cellars, teaching you about the port-making process and how to differentiate between different types (with the hopes, of course, that you’ll buy some at the end). 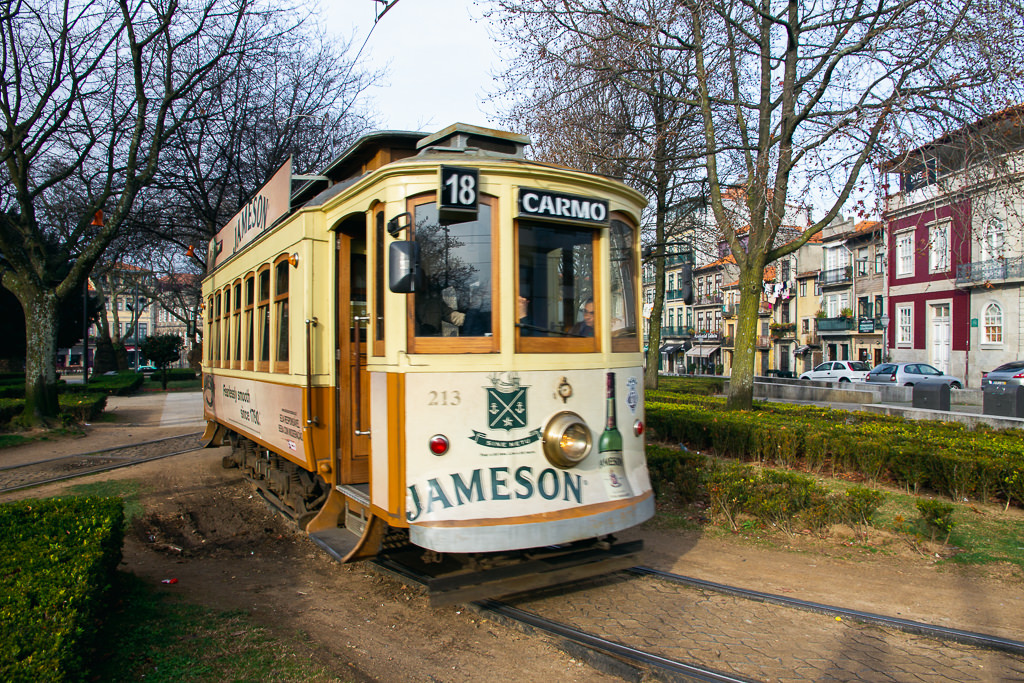 Porto has a number of vintage trams still in service. Line 1 runs westward from the center along the Douro river; it’s quite scenic and gives easy access to the beaches of Foz do Douro. Lines 18 and 22 snake their way through the old city. Everything from the signs to the track switches is still operated manually. 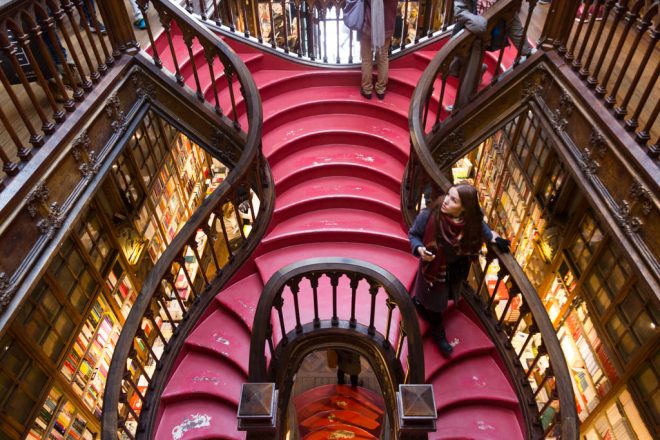 Livraria Lello might well be the prettiest book store I’ve been to. Opened in 1906, it’s one of Portugal’s oldest. Apparently, J.K. Rowling used to frequent this place while she was living in Porto as an ESL teacher back in the 90ies. Some say this place gave her inspiration for Hogwarts, which doesn’t seem like a total stretch.

The situation at Livraria Lello is now a little odd: on the one hand, it’s a wonderful book store selling Portuguese and English-language literature, nonfiction, and coffee table books. On the other hand, it’s also become a ticketed tourist attraction. Entry costs 5 Euro and entitles you to 10% off any book purchases.

Tip: the popularity of the sight has exploded and there may be a long queue in the summer months, in which case there are plenty of other things to do that don’t require waiting! 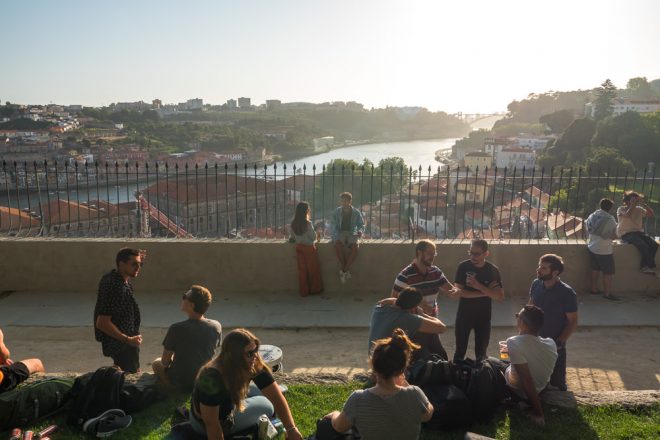 Want to relax after a long day of sightseeing around Porto? Then just grab a cheap beer or cider along the Passeio das Virtudes street, sit down on the grass, and watch the sunset over the Douro river.

This viewing point is where a lot of young people and students go to hang out, especially in summer. One of the two adjacent bars sells fantastic local craft brews. 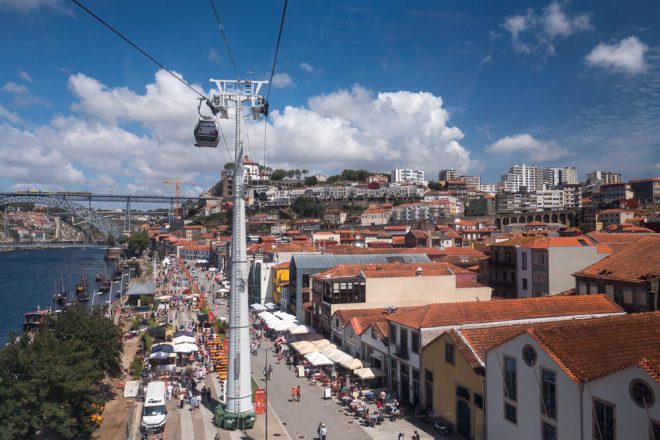 During your trip to Porto you will no doubt end up in Gaia, the opposite side of the river where most of the port cellars are. Here, the Teleférico de Gaia cable car will give you some great views of the Douro and delivers you to the top of the hill adjacent to Porto’s iconic Luis I Bridge.

A ticket costs 5 euros and will also give you a voucher for a free wine tasting.

13. Get amazing views at Mosteiro da Serra do Pilar 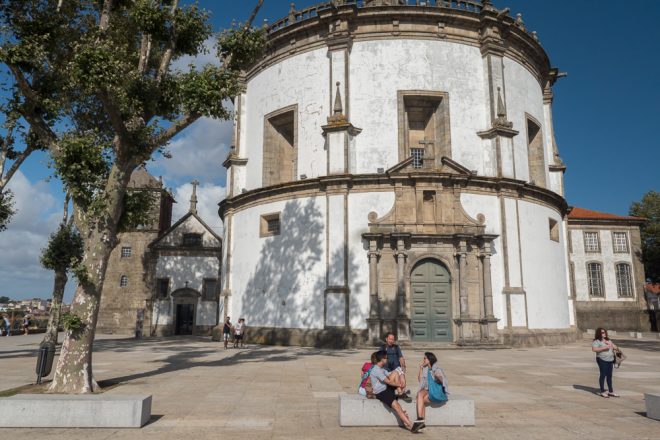 The Serra do Pilar monastery sits on on an outcrop overlooking the Dom Luís I Bridge and the historic center of Porto. This UNESCO World Heritage site gives you some of the best views of the bridge and city below.

The building now houses a museum on the heritage of northern Portugal, which serves as a nice backgrounder on the region — especially if you plan to travel east along the Douro. 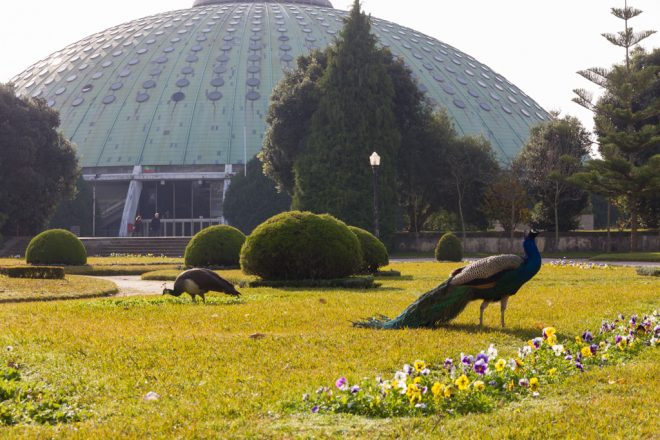 This unusual domed building, apparently once constructed for a world roller skating championship, certainly made my head turn when I walked past. Around it are some peaceful gardens, wonderful views of the Douro, and some peacocks milling about.

There is no actual palace here (just to avoid any dissapointment), but the gardens are pleasant enough. 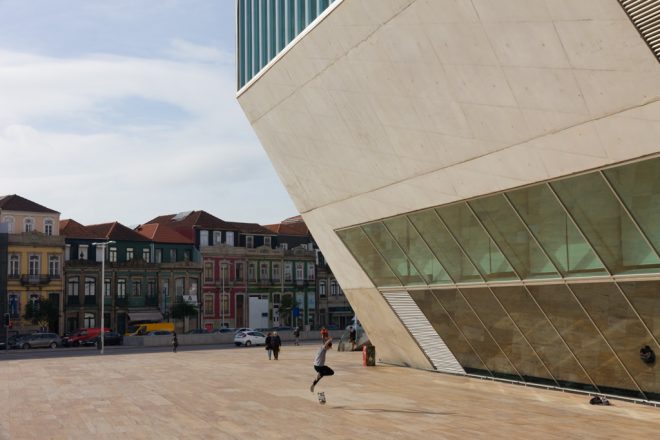 Designed by Rem Koolhaas, the wedgy Casa da Musica sits like a Jawa Sandcrawler along the Rotunda da Boavista. The best way to experience it is surely to go to a concert here, though it’s worth having a look for the architecture alone.

I must confess I’m not usually a fan of Koolhaas—I can’t help but think of designs like De Rotterdam or the CCTV building in Beijing as horribly grandiose and oppressive. But Casa da Musica feels quirky and approachable instead, contrasting wonderfully against the traditional houses that surround it.

16. Gorge on seafood in Matosinhos 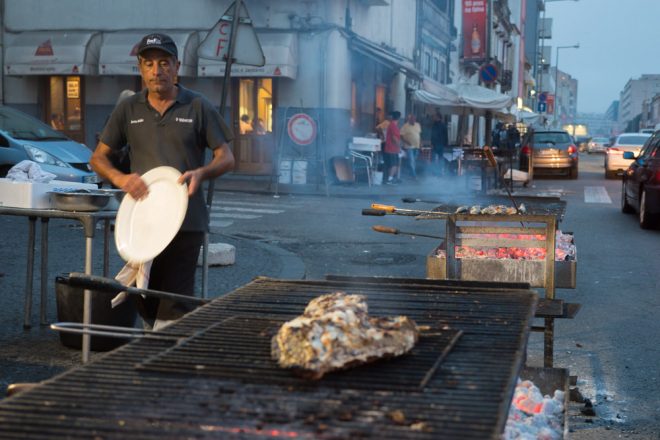 Got an appetite for something truly local? Then go to Matosinhos, a neighborhood next to the fisherman’s port known for its plethora of seafood restaurants. Each marisqueira has its own outdoor grill where they prepare the freshly caught fish, so you’ll see smoke billowing up all along its main streets.

The area is where many Tripeiros (people from Porto) will go to dine on seafood, feasting on things like bacalhau (codfish), sardines or octopus. There are even some more peculiar things to try here — if you’re up for a little adventure, try some goose barnacles!

Matosinhos is not in the touristy area of Porto, but easily reached: just take the metro to Brito Capelo or Mercado station. 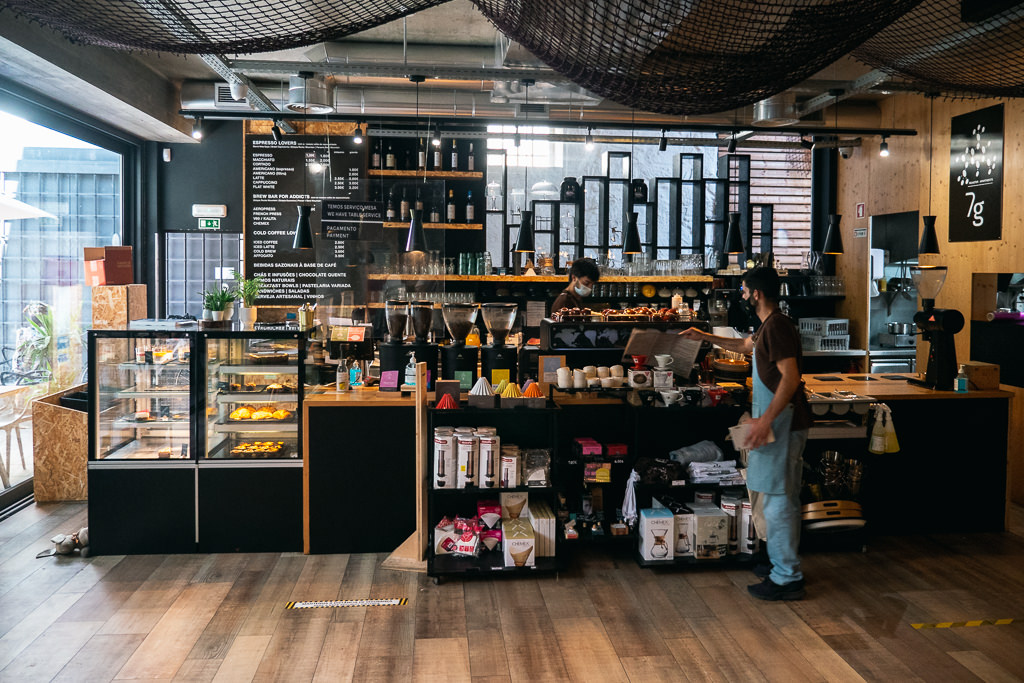 The specialty coffee scene is still in its infancy in Portugal, but 7G Roaster is proudly paving the way in Porto, roasting many varieties of coffee on-site. Their cafe offers some amazing coffee, not to mention breakfast and brunch.

Hidden in an alley among the port cellars but just one street away from the docks of Gaia (the opposite side of the river), it’s a nice and calming space. 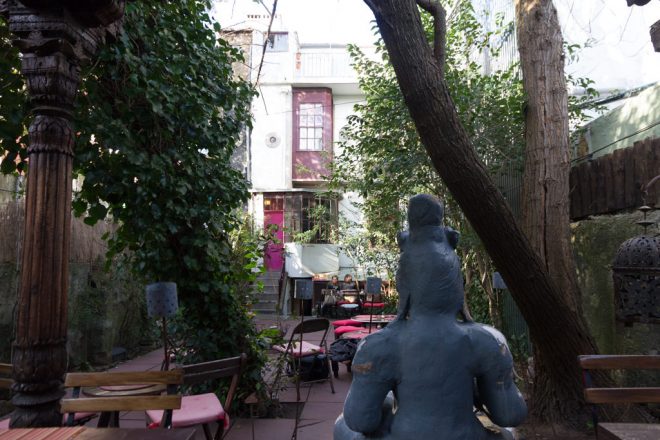 While we are on the topic of drinks, the hidden Rota do Cha has a dazzling menu of over 300 teas from around the world, served in a quiet leafy tea garden in a residential street. It’s a wonderful local spot where you can escape the noise of the city. 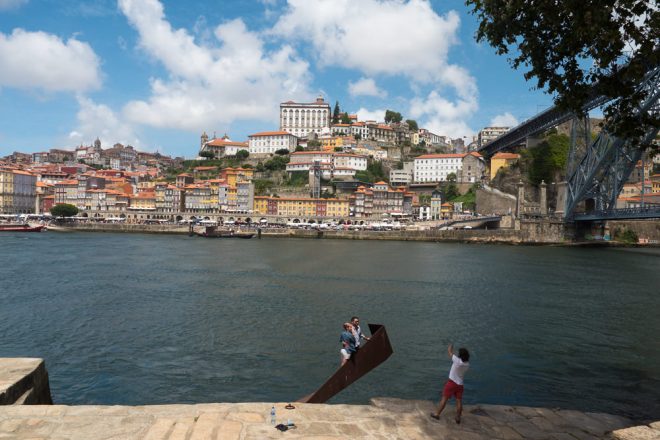 When to visit Porto

Porto is a year-round destination. I myself have visited in January, March, July, and November.

Do keep in mind that northern Portugal is wetter and colder than the center or south. While still having a mild climate, Porto does has a way of being a bit darker and mistier than other parts of the country — particularly in winter — though this does also give it a great vibe.

I think late July and August are poor times to visit as this is when the masses are traveling all over Europe. Unless you have children on summer break or you can only take time off during this period, there is really no reason to travel in August. If you have the option at all, I think it’s nicer to save your trip for a better time.

Spring and autumn are fantastic times to visit. There are fewer crowds, prices are lower, but you’ll still have pleasant weather. 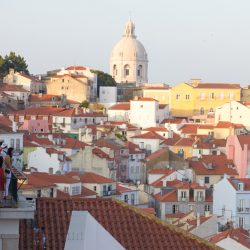 28 Amazing Things To Do In Lisbon + Tips 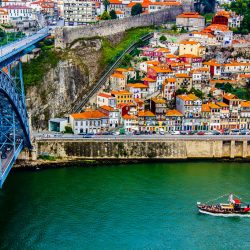 The 29 Most Phenomenal Places To Visit In Portugal