Nestled inside a beautiful valley, this town makes a great base for discovering the Chiapas region 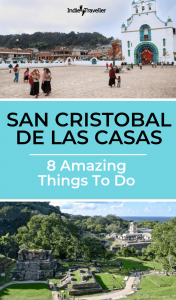 San Cristobal de las Casas was one of those stops that we built into our backpacking itinerary more due to logistics (it made a great stopover between the Pacific coast of Mexico and the Yucatán Peninsula) than any long-held desire to see the city—but it ended up being one of our favorite stops in Mexico.

Our scheduled five days in the city and surrounding area flew by, and by the time that we left, we absolutely knew that we hadn’t run out of things to do in San Cristobal, and our first visit would certainly not be our last.

If you’re gearing up for a backpacking trip through Mexico, go ahead and pencil a stop in San Cristobal onto your itinerary—I promise, you won’t want to miss any of these things to do in and around San Cristobal.

Plan your stay in San Cristobal

1. Stare in wonder at El Chiflon 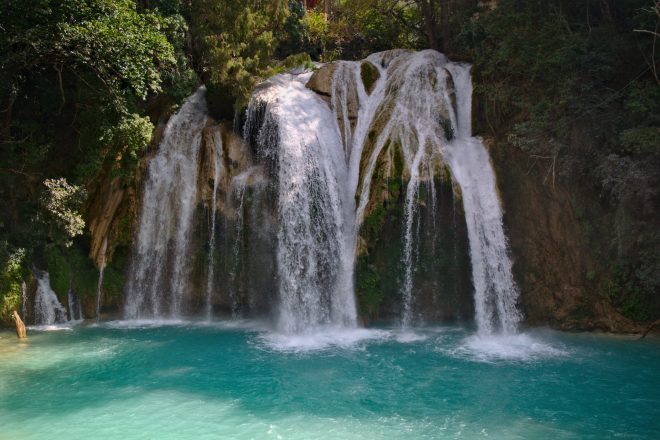 The waterfalls of El Chiflon quickly became some of our favorites in the world—they are incredibly beautiful, with vivid turquoise water that reminded me forcefully of the Plitvice Lakes in Croatia.

Whether you want to zipline through the park, go swimming in some of the more peaceful pools, or simply be mesmerized by the view of the water, a visit to El Chiflon should not be missed while you’re staying in San Cristobal. 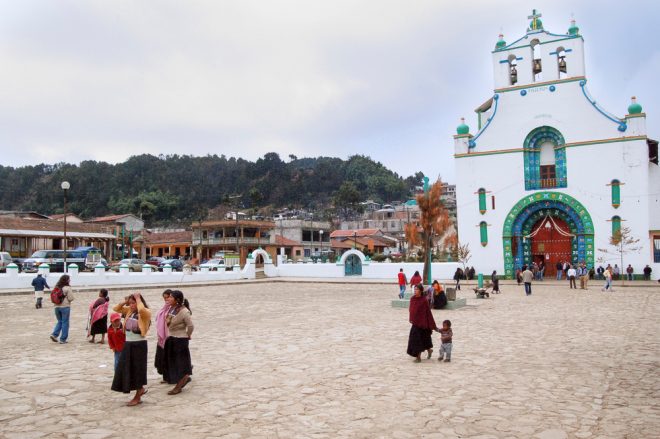 The Templo de San Juan is absolutely, without a doubt, the most unusual house of worship I have ever entered.

Ostensibly Catholic, the interior of this church is a sight to behold. There are no pews—simply straw on the floor. There is only one small statue of Jesus off to the side, with other figures taking far more prominent positions. The smell of incense is overwhelming, and thousands of candles burn not only on tables, but directly onto the stone floor.

While we were there, we witnessed a spiritual leader of some kind take a couple through a ritual that included burning dozens of candles, plenty of chanting that was not in either Latin or Spanish, and waving a chicken that was not going to survive the encounter.

We reached the Templo de San Juan via horseback on an afternoon tour that we took from San Cristobal, and I can’t imagine a better way to get to such an unusual place.

3. Ride a boat through Sumidero Canyon 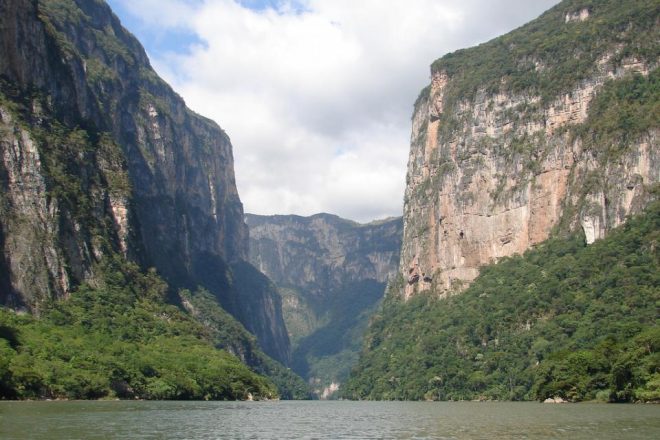 The walls of Sumidero Canyon reach over a kilometer high in some places, and there’s no better way to see them than from the river that carves its way through the canyon. A Sumidero canyon tour will take you down the canyon to a certain point and then back up via boat, with a guide who is happy to point out waterfalls, caves, birds, and even crocodiles along the way.

4. Explore the cathedrals of San Cristobal 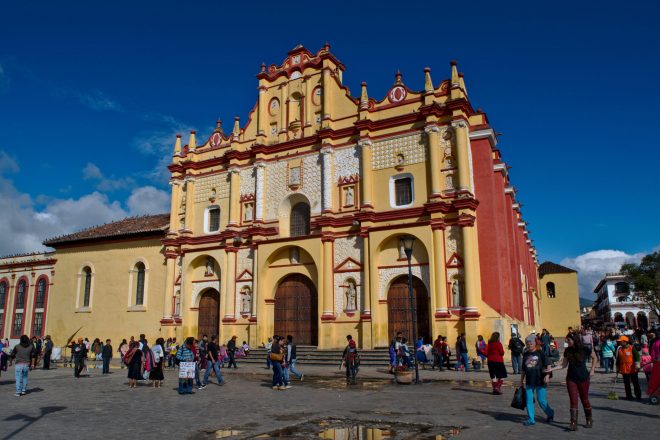 Like most cities in Mexico, San Cristobal is home to many colorful churches, and you definitely shouldn’t leave without visiting at least some of them.

I’m personally partial to the idea of visiting Iglesia de San Cristobal and Iglesia de Guadalupe, both of which are set at high points in the hills of the city, providing you with great views of San Cristobal during your visit. 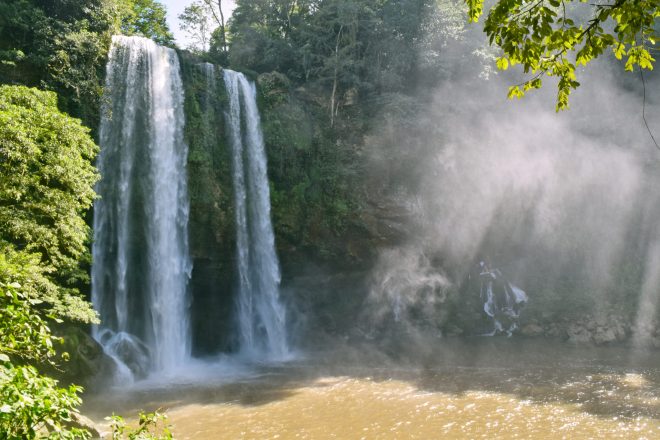 The waterfall of Misol-Ha pours over a rock formation and into a pond set so low that looking up at Misol-Ha from the bottom almost feels like sitting at the bottom of a cenote. Like visiting a cenote, you’ll also have the chance to swim while you’re there, or even climb behind the waterfall itself to reach a small cave (and get completely soaked while doing so).

We visited the Lagos de Montebello as part of a tour from San Cristobal, but this national park could also be a destination of its own.

The lakes are often covered in fog, as they were on the day we visited, but that didn’t stop some visitors from kayaking through the beautiful lakes or paddling on rowboats out to small islands—personally, I was happy to observe the view from dry land with a cup of hot chocolate sold by one of the many nearby food stalls. 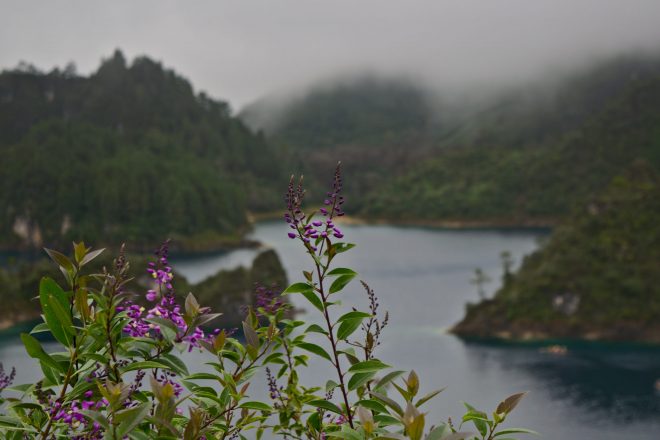 7. Choose your own outdoor adventure

Hiking, mountain biking, zip lining, horseback riding, whitewater rafting—San Cristobal is a perfect jumping off point for a whole host of adventure activities. Whatever is calling your name, this is the place to do it—the natural beauty of Chiapas will make the experience unforgettable. 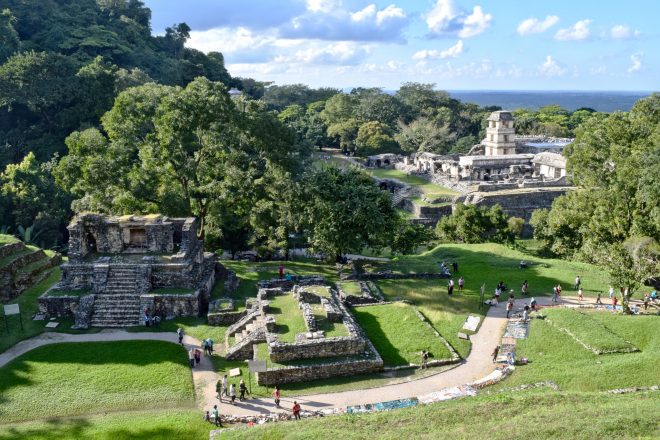 I list Palenque last not because it is the least exciting thing on this list (honestly, it belongs near the top of a ranked list), but because of the effort it takes to get there from San Cristobal: though day trips there are sold at every tour agency in San Cristobal, it is quite a commitment to leave before 5am and get back around midnight.

These were some of our favorite ruins in Mexico, though, so I would never suggest anyone skip them for that reason.

What we did as a compromise was visit Palenque on our way out of San Cristobal—it was the last tour we booked there, and we stayed with our driver until the very last part of the day.

After climbing over the city of Palenque and marvelling at how gorgeous it was, we simply stayed in Palenque, having said goodbye to San Cristobal that morning—and though we were sad to leave, I can’t think of a better way to say goodbye (and it certainly was more fun than taking a bus!). 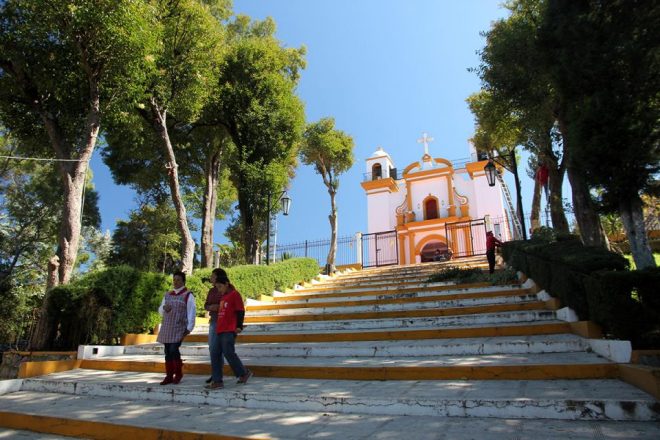 San Cristobal, and Chiapas by extension, is the cheapest destination we visited in Mexico (which was already a very affordable place to travel).

Day trips and tours are sold at several agencies around town, generally running between $10-$30 USD/person for a tour—and $30 USD is really pushing the high end.

For hostel lovers, dorms are available starting around $6 USD/night. We personally paid $29/night for a private, centrally-located Airbnb.

If you’re looking for a place to take it easy on spending for awhile (and if you’re heading east toward the Yucatan like us, you’ll want to!), San Cristobal is definitely that place.

Kate is busy traveling the world with her husband and documenting all the adventures (and how to pay for them) on her blog, Our Escape Clause. When she’s not writing, you can normally find her on a hike somewhere gorgeous, swimming in a beautiful sea, wandering around a city, or baking one of the thousands of dessert recipes she finds on Pinterest. 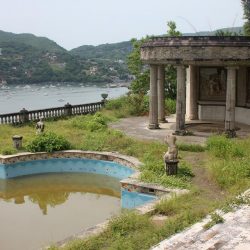 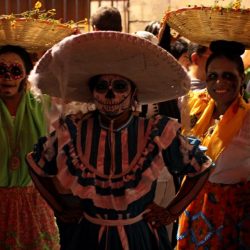 Day of the Dead in Oaxaca Impressions