by Marek Pin for later! 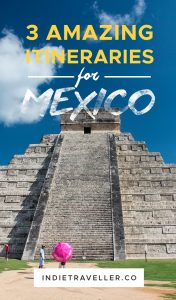 When you’re planning a trip to Mexico, its sheer size can be daunting. Just pick up any travel guide to Mexico and it will easily be inches thick, listing dozens upon dozens of top places to see.

So… where the heck should you start?

Well… I’m afraid that planning a backpacking trip to Mexico can be an agonizing process! When I first decided to go, I ended up with a huge wishlist of things I wanted to do in Mexico — but even with three months of travel time I still had to pare things down.

Mexico is bigger than all of the Central American countries to its south combined, so it’s best not to bite off too much. It helps to focus on specific regions and cherry-pick some of the best Mexico has to offer. In this guide, let me try and help you do just that.

Since it’s such a huge and incredibly diverse country, it can be difficult to decide where to go in Mexico. But fret not, as there are several travel routes that are sure to give you a great experience.

If it’s your first time in Mexico, focusing on these popular areas can make things a lot easier — and will ensure you’ll have your pick of tons of interesting things to see and do.

Even if you’re not able to follow these itineraries in full, you might be able to do them in part.

Get insurance for your Mexico trip 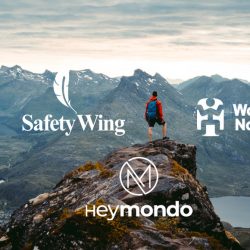 Get a quote at Heymondo

This is the classic itinerary for backpackers and independent travellers wanting to see a variety of places in a relatively safe part of Mexico.

It starts in the center of the country in Mexico City and ends in the Yucatán Peninsula, the southeastern region hugging the Gulf of Mexico, which was once the home of the Maya civilization. 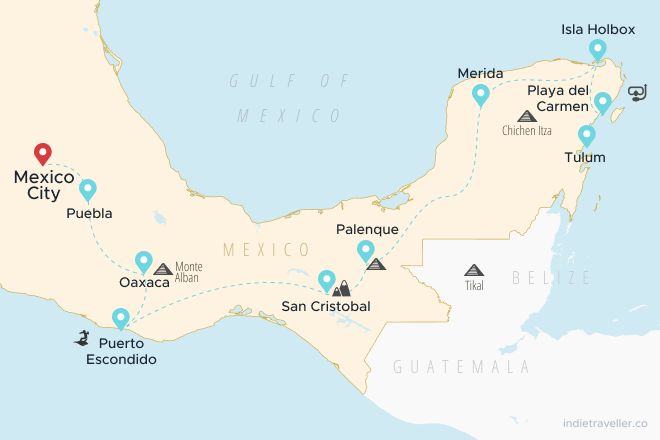 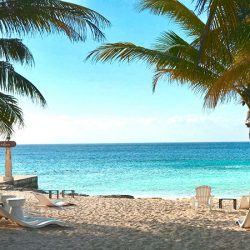 Yucatán Travel Guide: Where to Go Beyond Cancún

I loved travelling this well-known Mexico itinerary as it packs a ton of variety all rolled into one big enchilada. It will truly give you a bit of everything while also keeping the route fairly manageable.

First, you can have the ultimate city experience in Mexico City. Then, move to the Oaxaca region which is world-famous for its food, and to Chiapas, which has some amazing scenery and Mayan ruins. Finally, chill in the Yucatán, a region famed for its beautiful beaches, reefs, and islands.

To do this route justice you need at least 3 weeks, but more is always better.

If you have only 2 weeks, you could adapt the route. For example:

The route is point-to-point and doesn’t form a circle. But it’s still convenient as it’s easy to fly in and out of Mexico City — and the same goes for the popular resort city of Cancún in the Yucatán. In between these two points, it’s easy to travel by bus.

Travel on this route is not too strenuous, but you might still have to endure a 10-hour bus journey here and there. The leg between San Cristóbal de Las Casas and Oaxaca, with its countless twists and turns in the road, is a particularly wearying one. Fortunately, the distances in the Yucatán are much easier to deal with.

Are you travelling as a backpacker? Then you’ll be happy to know there are loads of hostels along this route. If you’re going solo, it’s also easy to meet other travellers along this well-worn trail. Many of them will be long-term travellers on their way to (or on their way from) Guatemala, Nicaragua, and onwards — often following the popular Gringo Trail backpacking route.

There is only one downside to this route: a few parts of the Yucatán can be super touristy and maybe a bit less interesting if you’re there to soak up the culture. Cancún and Playa del Carmen are basically just big commercial resorts; expect beach promenades with souvenir shops, luxury condominiums, over-priced restaurants, bars and clubs, and entertainment activities like bar crawls and banana boat racing.

Fortunately, if you’re more into authentic culture and nature or chilled out vibes, then there are plenty of places to pick from in the Yucatán; I highly recommend you dig into our Yucatán guide. 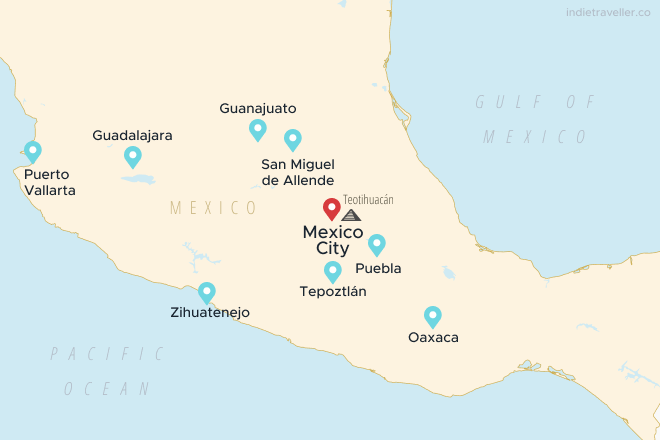 Another option is to focus your itinerary on the centre of Mexico. If you’re looking for a travel route that focuses a bit more on the culture, history, and charming colonial towns, then it’s worth looking closer at exploring the regions of Puebla, Guanajuato, and Jalisco. 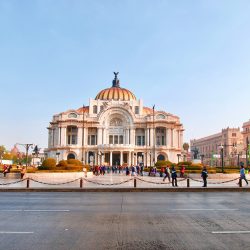 What To Do in Mexico City: 23 Things You Can’t Miss

All of these regions are near to Mexico City, so your route can begin and end in the capital, creating a circle. It’s possible to create a fairly compact itinerary, making this a good area to hit up if you don’t exactly have unlimited time.

I think it’s best to have at least 2 weeks to explore the key locations here, but more is always better.

Focusing on these colonial heartlands of Mexico will let you take a deep dive into its architectural and cultural heritage. Many places around here played a major role in Spain’s colonial advance and are characterized by the silver mining that took place here throughout the centuries. Historic churches, colonial plazas, great food, and a lot of Mexican folklore are all on the menu here.

There’s less of a typical route to suggest here, as you can connect the dots in many different ways. From Mexico City, many travellers like to visit Guanajuato, a vibrant city typified by its numerous underground tunnels, creating a sort of three-dimensional maze of passageways.

Another favourite is the beautiful city of San Miguel de Allende, which is somewhat known as being gringo central (i.e. filled with U.S. expats and retirees) but also has a fantastic art scene and has an old town that received UNESCO World Heritage status.

The rich mountainous silver-mining regions of central Mexico lend themselves well to a culturally-focused trip, but if you’re also craving a beach, then you can add this in too. The beach resort of Puerto Vallarta is not too far away — though it’s far from a funky backpacker haunt (expect to find a modern beach resort with many 5-star hotels).

If you’re after a beach resort that’s less famous but packs a lot of charm, I can recommend visiting Zihuatanejo. It has a beautiful bay and mostly low-rise development. It’s not yet on the radar so much, so you’ll find mainly Mexican holidaymakers here and maybe a few lost backpackers. 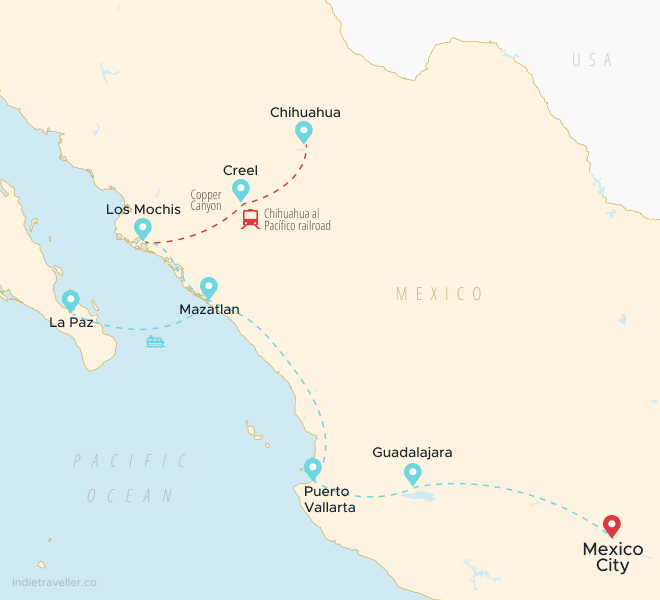 Okay, this route from Mexico City to the north of the country is something a bit different.

To be honest, it might be all just be one big excuse to see one particular highlight, namely the spectacular Copper Canyon (or Barrancas del Cobre).

This jaw-dropping system of canyons is by some measures bigger than the Grand Canyon in the US. A train runs through the national park, giving you some spectacular views and getting close to the canyon edge about halfway through at Divisadero station. This train ride is easily one of the best things I have done in Mexico.

First, a little disclaimer. If you want to go this way overland, you’ll have to go through Sinaloa state, which at the time of writing has a few safety issues. Such warnings are still to be kept in perspective as they normally have nothing whatsoever to do with tourists, but I thought I should still mention it. Chihuahua City is also relatively close to the US border and seems a bit rougher around the edges. It’s an amazing part of Mexico but, for what it’s worth, the vibe can be subtly different from the super-tourist-friendly Yucatán. I’m mentioning this only if you have little travel experience or have specific concerns — I still felt totally safe around here myself.

Wait, where were we? Right — for this route, you can start in Mexico City and then make your way up to Mexico’s second largest city Guadalajara.

This is a great place to stroll around markets and plazas or to visit museums. I loved Guadalajara and found its size to be a bit less overwhelming than Mexico City. From Guadalajara, consider taking a side-trip to Tequila, the birthplace of the drink and where you can take tours out into the agave fields that are on the UNESCO World Heritage list.

You can then make a trip to the beach resort of Puerto Vallarta, or head straight for Mazatlan. This expat and tourist city is full of big hotels at one end of its bay, but also has a pleasant old town on the other that seems pretty popular with surfers. Mazatlan has a ferry connection to Baja California (La Paz) where you will find many spots for diving, surfing and swimming with whale sharks. Another northern beach place to go is Puerto Penasco.

Then make your way up to Los Mochis. This is where the Copper Canyon train starts! Los Mochis itself is a totally unremarkable industrial place, so there’s no need to stick around. But the train ride is amazing, first going through flat lands at first but soon going through mountainous landscapes surrounding the Copper Canyon. Be sure to get off at the town of Creel, which is the base around here for trekking, cycling, and other activities inside the national park and around the canyons.

The train continues to Chihuahua City, but you can also easily take the bus from Creel as the landscapes are less interesting along this part. From Chihuahua, you can take a cheap flight back to Mexico City.

If you just want to see the Copper Canyon and don’t mind taking a flight or two, I suppose you could also fly straight to Los Mochis from Mexico City.

Despite these parts being much less visited, I think the route is totally worth it — especially for Guadalajara and for the Copper Canyon.

Feeling inspired to go backpacking in Mexico? Don’t miss our top places to visit in Mexico and travel tips, and our guide to Mexico City and the Yucatan Peninsula. 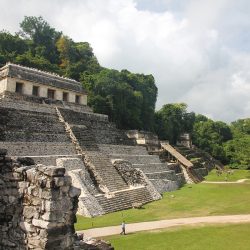 Yucatán Travel Guide: Where to Go Beyond Cancún

This isn't our only post on Mexico! Be sure to check out our complete archive for all our other travel guides...