Despite a tourism boom, Bali still has many idyllic spots to explore

The Great Lakes of Bedugal

by Ray Montgomery
Has lived on Bali for 15 years 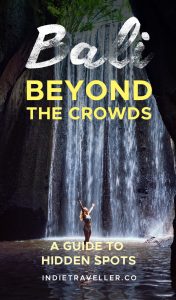 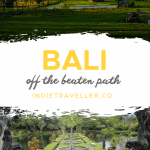 My first experience of Bali 15 years ago was a copybook trip, following the hordes to Kuta beach and the bus tour crowds to the cultural heartland of Ubud. While enjoyable, it left me a little underwhelmed, wanting more of the real Bali, beyond the tourist traps and street hawkers.

It took me a couple more visits (before decamping semi-permanently on the Island of the Gods) to discover a very different Bali, blissfully free of the masses.

The south coast beach resorts are ground zero for mass tourism but that leaves a big wide open space for the rest of us to explore chilled-out, under the radar beaches, idyllic rural landscapes and have real cultural encounters.

The reality is you can have a stretch of fine white sand all to yourself and scamper through rainforests and rice paddy fields without encountering another western face all day long. Just check out these Bali hidden gems. 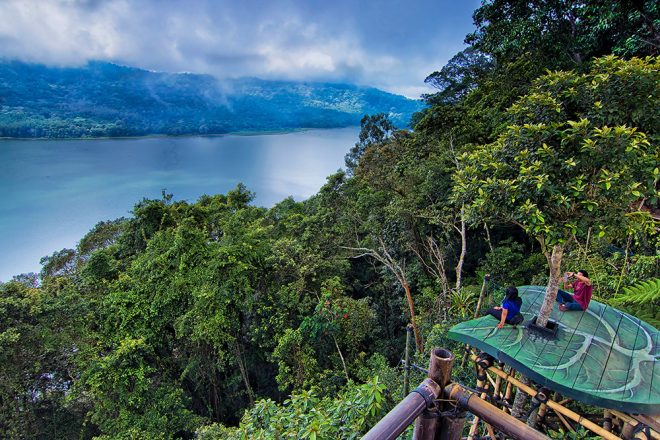 The Great Lakes of Bedugal

The winding road dissecting Bali’s north central highlands from Ubud to the volcanic beaches of Lovina are fairly well travelled but few take the time to stop en route.

Mountains and greenery abound in this little pocket of Bali quietude, dominated by two immense lakes. These are the so-called twin lakes of Lake Buyan and Lake Tamblingan, separated by a thin two kilometre strip of land.

Legend has it this was once a single body of water prior to a huge landslide about 200 years ago.

Due to the elevation, this area is cool, sometimes damp and misty. During my last visit in summer, a thin veil of mist sat just over the water as we paddled around in battered wooden kayaks, passing grizzled old fisherman and local families picnicking by the shoreline. It’s a popular weekend hangout for locals but western faces were a rare sight.

There is a range of ‘viewpoint’ restaurants hugging the hills. Great for sweeping views of the two lakes and beyond, but food quality is hit or miss and almost always overpriced. Still, we didn’t stop to eat this time – we were on a mission to pick our own food.

Along the roadside are literally dozens of coffee, vanilla, and cacao plantations, but the big draw is picking your own strawberries right in the heart of Bali’s fruit bowl region. 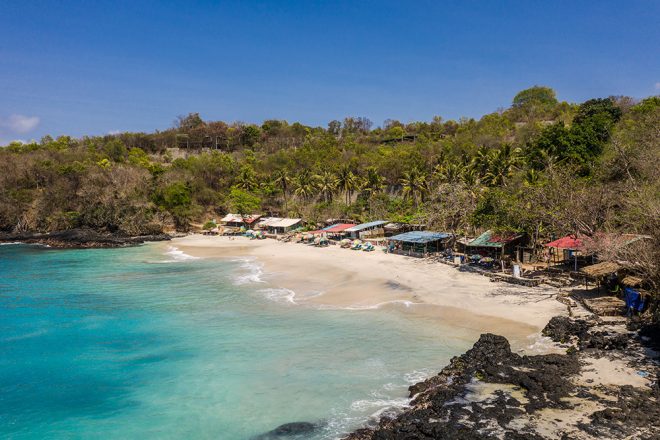 The east coast port of Padangbai is harbouring a true hidden gem on Bali. Just 10 minutes on foot from the jetty is a hidden beauty of a white sandy beach.

Reached via a nondescript track and hemmed in by overgrown rocky headlands, powder soft white sands, and awesome ocean sunsets await at Bias Tugel Beach. The raucous crowds and annoying hawkers of Kuta beach will soon feel like a distant memory.

There is a smattering of simple beach cafes with a few sun loungers scattered along the sands. It’s a very laidback vibe with few other people around except for weekends when local families come to play in the surf. It all adds up to a hazy, lazy day chilling on the sand.

Just to the west of the main beach is a good snorkelling spot where turtles bask in the shallows. It should come as little surprise to learn it is dubbed ‘secret beach’ by locals. 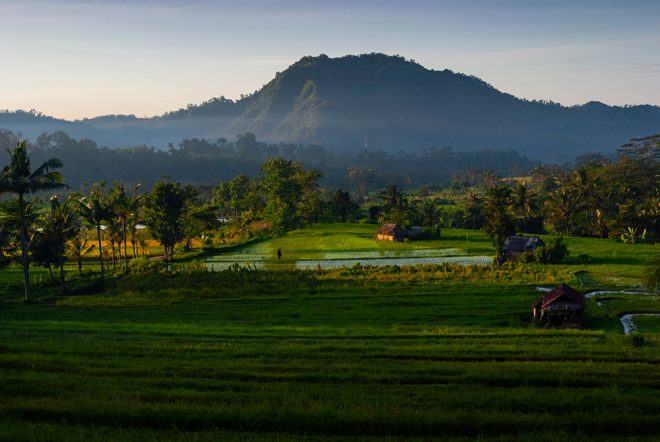 Sidemen is a curious destination. There is undoubtedly a buzz about the place yet few travellers spend much time here, apart from a cursory stop to ‘do it for the ‘Gram’ on the famed Sidemen swing.

Pronounced Si-de-men, this is the antithesis of traffic-clogged South Bali and even light years away from the Ubud scene.

It’s a blissful outpost in the foothills of Mount Agung. It is, arguably, the best vantage point of all to gaze at Bali’s sacred volcano. It takes quietude to a whole new level, set within a series of stunning valleys.

These are blanketed in rice terraces, artfully carved by Mother Nature, as well as rolling fields of chilis, coffee, cloves and cacao. There are no bright lights; only the simple pleasures of exploring verdant trails along the valley ridges, and clambering down the steep rice terraces. There are shady walks through macaque-filled forests that lead to Hindu temples carved into the hillside.

I noticed a strong spiritual aura about Sidemen, yet it also has a faintly bohemian vibe. I’d give it at least a couple of full days to really explore the surrounds. Head to the village of Tabola for the lion’s share of decent value homestays, and regardless of the price point, every single one comes with priceless views. 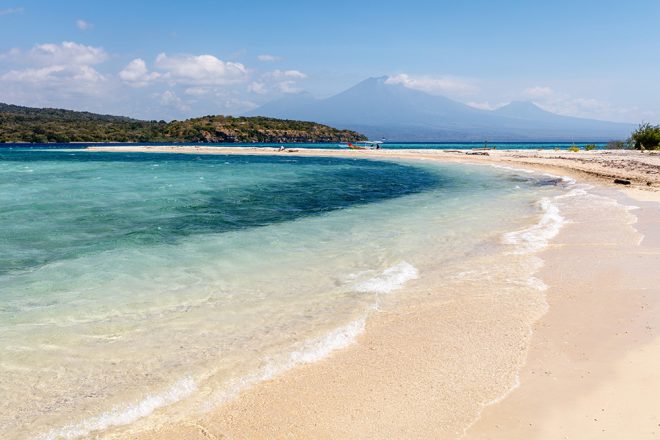 There is an intense rugged beauty about West Bali and mystery too once you venture beyond the surf breaks of Medewi. Bali’s north western tip is home to the protected Bali Barat National Park, which is effectively Bali’s last great wilderness.

It rewards intrepid visitors with invigorating treks up jungle-clad mountains and through savannah and dense mangrove forests. This diverse landscape also includes West Bali’s most popular attraction – the awesome coral reefs of Menjangan Island which attract a steady stream of scuba divers year-round. Apart from diving, very few travellers make the effort to venture this far north, thanks in part to the arduous drive. It may be only 100 km from Denpasar but can take a mind-numbing four hours to get there.

This is the main habitat for the endangered Bali Starling, as well as the flying fox, numerous reptiles, Menjangan wild deer and wild boar. It covers an expansive 100 square km of diverse terrain set around a couple of extinct volcanoes, while the northern peninsula features long stretches of protected beaches which are mostly completely deserted.

Your only entertainment here is the shrill sounds of birdsong, and spotting the crab-eating macaques storks, and kingfishers scrabbling around in the mangrove shallows. It has a true ‘end of the world’ feel.

Ubud sounds the siren call for Bali’s mysticism, culture and awesome landscapes. That inevitably means overflowing streets filled with travellers and roads clogged with tour buses. True, but Ubud and its environs can still conjure up a few surprises. It took me numerous visits over many years visiting Ubud before I realized there were several awesome, little known waterfalls just a short drive out of town.

Tukad Cepung Waterfall is the archetypal hidden spot. It’s so secretive it’s concealed inside a cave.  A rushing cascade of water drops through an opening in the rock as it is illuminated by glistening sunlight. It’s quite a visual feast for the eyes. The water is accumulated within the circular cliff walls, creating a cool bathing pool, although it’s not recommended during the rainy season when the water line can rise dangerously fast.

An easy 20-minute jaunt from Ubud town, the waters of Tegenungan Waterfall career over a limestone cliff which miraculously appears in a clearing of dense rainforest near Sukawati. The powerful waters drop down from a height of about 30 metres over two levels. There are steps up to a higher elevation to watch the torrents race over the cliff edge into the gorge, as they churn up the turquoise waters of the bathing pool. Due to its proximity to Ubud, this waterfall is more popular than most – note the Instagram-friendly swing – so beat the crowds with a morning visit.

Now, let your mind wander. If you could dream up a hidden hideaway to call your own right in the middle of a dense forest, it would inevitably look something like Kanto Lampo Waterfall. In fact this waterfall was completely unknown before 2015, even to locals. The water cascades down the rocky hillside into a very narrow river hemmed in by large rocks and overgrown vegetation. It’s an incredibly serene spot. Although a fairly easy, yet slippery, walk down stone steps to the river from Beng village, it really does feel like an undiscovered hideaway.

A sleepy East Bali market town, it’s hard to imagine Amlapura was one of the most important places on the island during the days of the Bali Rajas. It was the seat of the influential kingdom of Karangasem, yet Amlapura is rarely included on Bali tour sightseeing itineraries. In the shadow of Mount Agung, the town’s old royal palace is a fascinating window into 19th century royal architecture and art.

Amlapura’s traditional market is right up there with Bali’s best – authentic, organic and typically hectic. It’s stacked high with pungent spices, tropical fruits and fish, and there are numerous adjoining food stalls to grab a fill of satay, spicy grilled fish and sticky rice desserts.

Amlapura’s top tourist magnets are the two royal water places located just a few kilometres outside the town – Tirta Gangga and Ujung. Tirta Gangga in particular is a serene spot with a unique mix of mid-century Balinese and Chinese design, filled with dozens of quirky statues depicting the gods of good and evil. A few kilometres east of Tirta Gangga is the so-called ‘Gates of Heaven.’ This is the photogenic Lempuyang Temple, which is set in the foreground of Mount Agung and has already garnered a big dose of Instagram infamy. 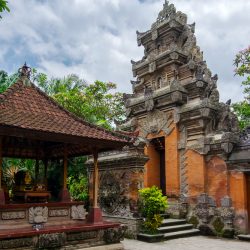 Ubud vs Canggu: Where to Stay on Bali