Tenerife is a great destination for those looking to enjoy the sun, sand, and surf while also exploring the unique landscape. With only patchy public transport options available, renting a car is the best way to see Tenerife’s beautiful beaches, rugged mountains, and lush forests.

The island’s road perimeter is a mere 359 km, meaning you can circumnavigate the entire landmass in just 3-4 hours by car.

The best car rental deals can usually be found at the airport. However, there are two airports in Tenerife, so be sure to compare prices before you book. The vast majority of cars are rented out at Tenerife South Airport, which is closest to the resorts, but Tenerife North is also a perfectly good place to rent your car in Tenerife. 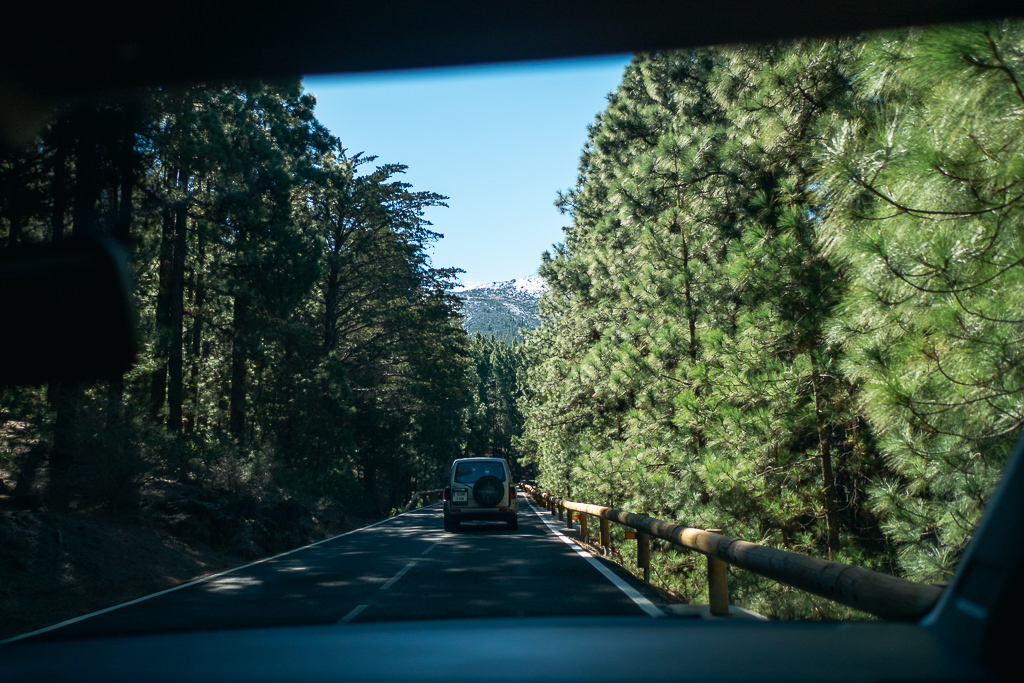 With DiscoverCars you can compare prices from all available car rental companies. This search engine will check both familiar international brands (e.g. Hertz) and local companies in the Canary Islands (like Cicar).

Simply use the search box below:

You will need to have a credit card and a valid driver’s license to pick up your car. Be sure you understand the terms and conditions of renting before signing any agreement, as some companies may charge extra for things like travel insurance, tag fees, mileage fees, and more.

The cost of hiring a car in Tenerife typically ranges from 25 – 50 Euros a day for a compact 4-seater and gas prices are generally low.

Is driving in Tenerife difficult?

Driving in Tenerife feels like driving in most European countries. If you’re used to driving in other countries, then you should feel comfortable behind the wheel. The roads are generally well-maintained and clearly marked, the laws are the same as in Spain, and there are plenty of scenic routes to enjoy.

It’s important to note that the speed limit is a bit lower than what you may be used to – 50km/hr on normal roads and 90km/hr on highways. Plus, make sure to watch out for the local animals like goats and donkeys that may wander onto the roads. This happens only rarely but is a possibility.

One of the major concerns regarding driving in Tenerife is the traffic. Since the road perimeter is so short, it can be quite crowded with locals and tourists. In the past few years it has increased dramatically in some areas creating traffic congestion.

That said, on the TF1 motorway it’s generally very easy to drive with two lanes on each side. On the north coast part of the TF-5 ring road only has one lane on each side and it’s a bit more crowded as a result, with often a continuous stream of cars flowing down this narrower section.

Some of the road trip routes described further below follow smaller mountain roads, which are not particularly difficult. 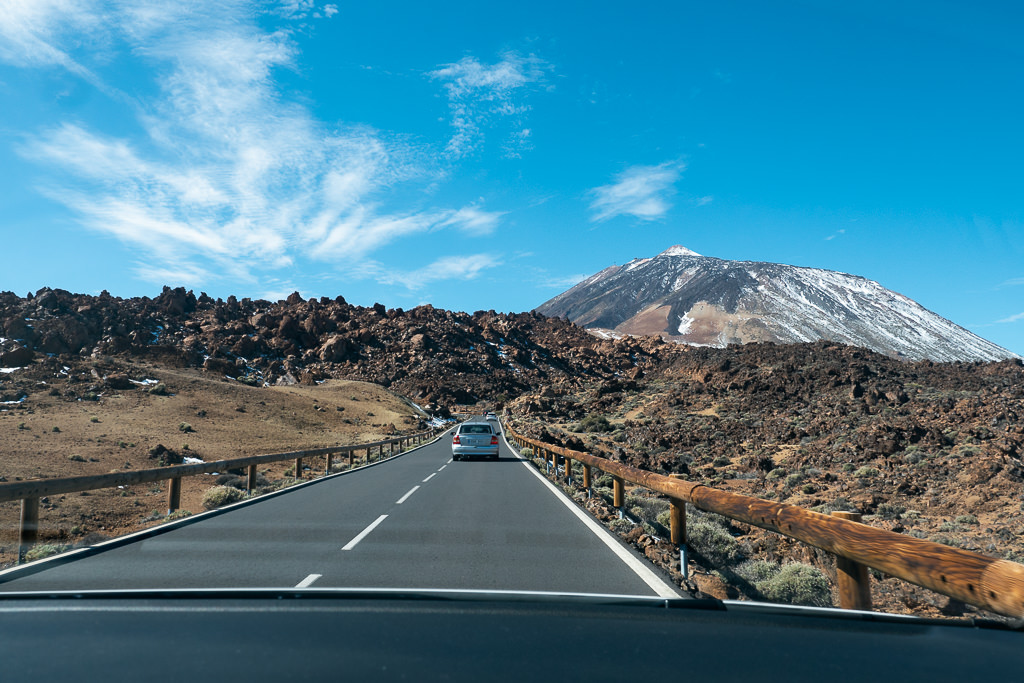 What are the driving distances?

Here are some of the average driving distances between cities and towns in Tenerife.

As you can see, the distances between each of these locations are relatively short. This makes it easy to explore the island by car!

In Tenerife, they drive on the right side of the road, as in the United States and in Europe (except for the UK and Cyprus).

Renting a car in Tenerife is relatively easy for any nationality, but there are a few things to keep in mind if you’re from the UK. Make sure that your license is valid and up-to-date, as rental companies may not accept expired documents or paper documents. You will need a hard copy of your driver’s license and need to be at least 18 years old.

You don’t need an international driving permit to drive in Spain as you do in other European countries.

You will need to provide insurance, as rental companies usually require some form of coverage. If you don’t have a policy, then you can purchase insurance through the car rental company or your travel provider.

One of the hardest things to get used to when driving in Tenerife is that they drive on the right side of the road with the wheel on the left. This can take a little bit of getting used to, so make sure to be extra cautious when driving around corners.

This can be a bit confusing in the beginning as you might end up rolling down your window vs shifting gears but after about an hour or two behind the wheel, you should get the hang of it.

You can check car rentals on Tenerife here.

Driving tips for Americans or outside the EU

Now for Americans, you would think it’s relatively easy to rent a car as you can do it in the US. However, when driving abroad there are a few extra things to keep in mind.

First off, if you’re from outside of the EU or have an international driver’s license, you will need to present both documents upon rental. Additionally, most companies require that you have at least 1 year of driving experience before renting a car.

The last thing to remember is that many of the cars are not automatic, so if you are used to driving an automatic, you may want to check if the car rental companies have a vehicle available with that option.

There are some amazing drives in Tenerife. The island is actually worth exploring as a whole and if that’s something you’d like to do, don’t miss my complete travel guide to Tenerife. Here, I will give a quick overview of four really nice road trip routes.

One of the best road trips in Tenerife is the mountain drive through Rural de Teno Park. This 40 km (25 mile) drive will take you through some of the most stunning scenery Tenerife has to offer. 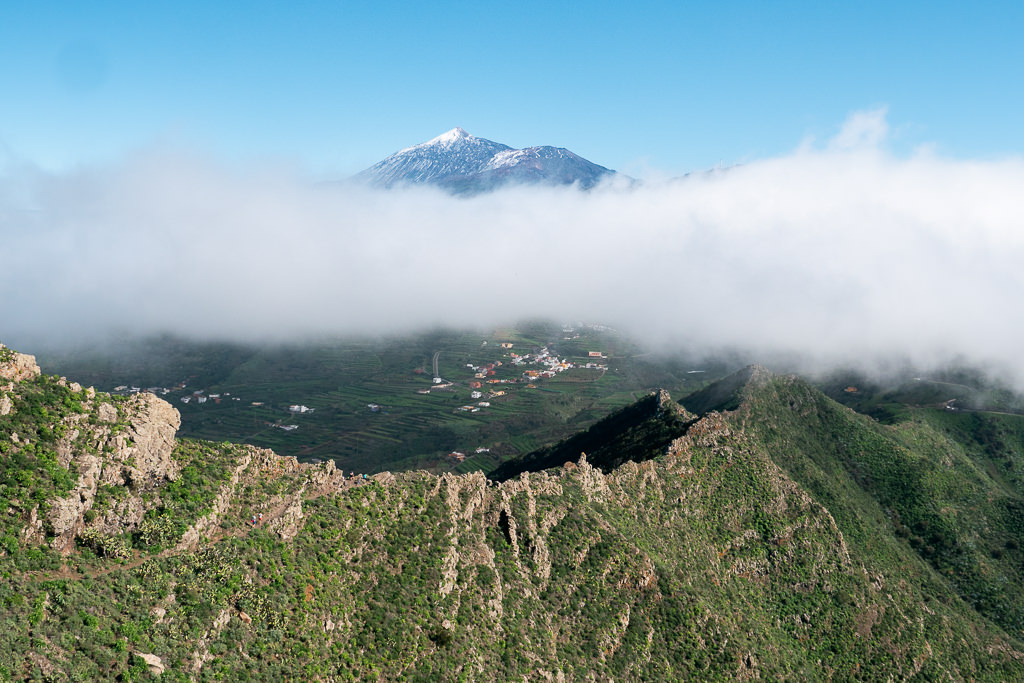 Along the way, you’ll pass by quaint villages and farms, lush vineyards, and breathtaking views of the Atlantic Ocean.

A must-visit on this road trip is the town of Masca, a picturesque mountain village right before you make your way to the coastal town of Buena Vista. Once you make it to the coast, enjoy a delicious meal in Garachico, which has some of the best food on the island. 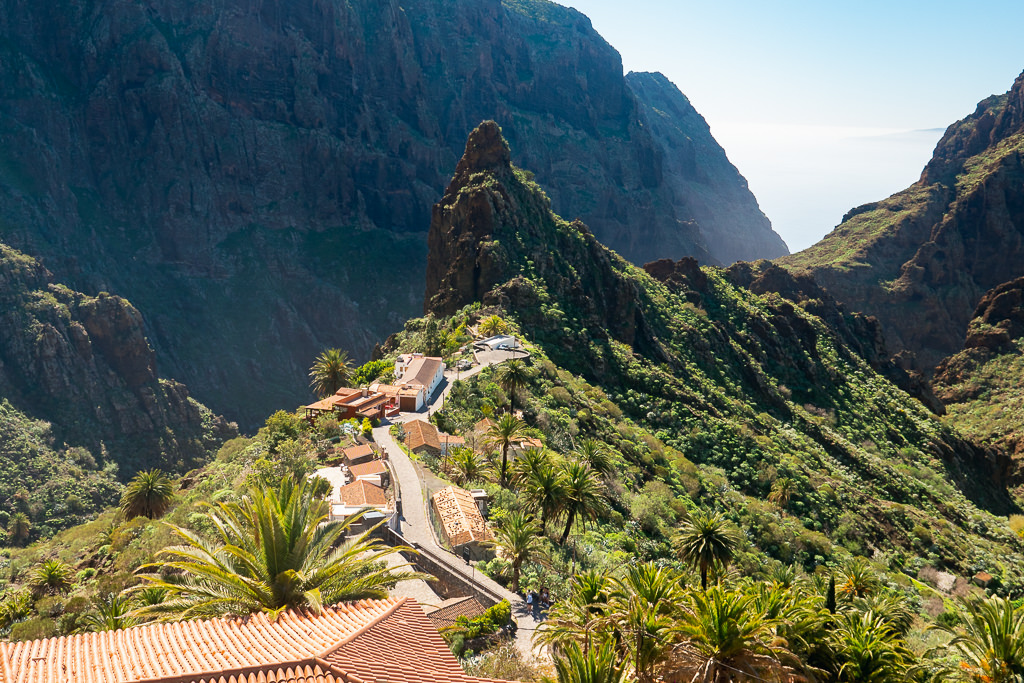 To explore more of the island, then consider taking a road trip through the north of Tenerife. This route will take you through some of the most beautiful towns on the island, and you’ll have plenty of opportunities for sightseeing, museum visits, and town hopping.

The first stop on this road trip is the town of Garachico. This charming coastal town is known for its black sand beaches and lively nightlife. 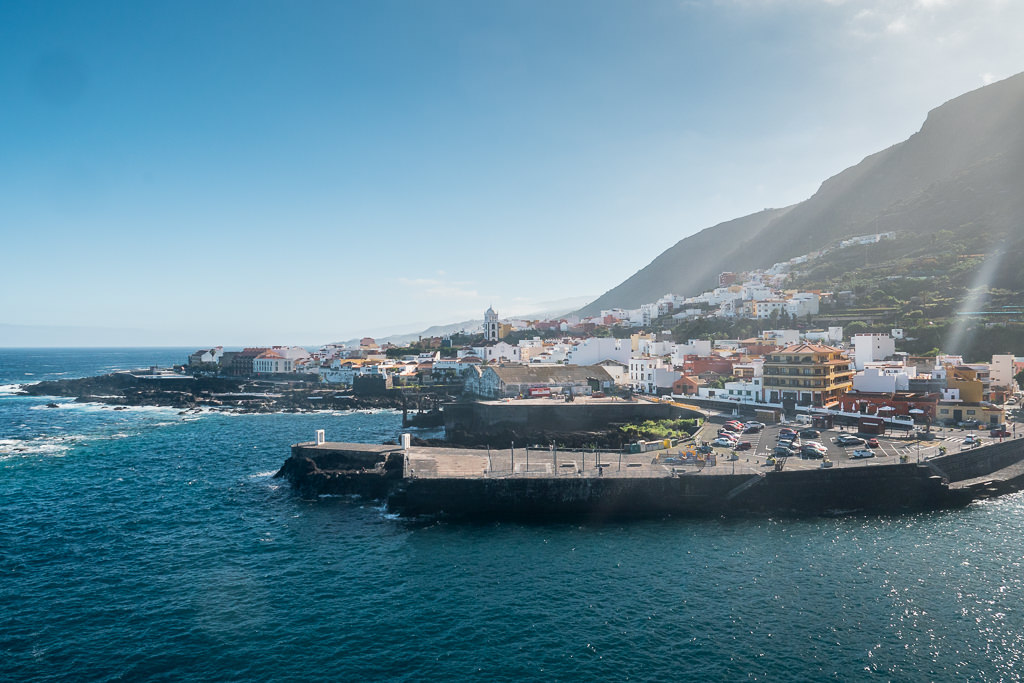 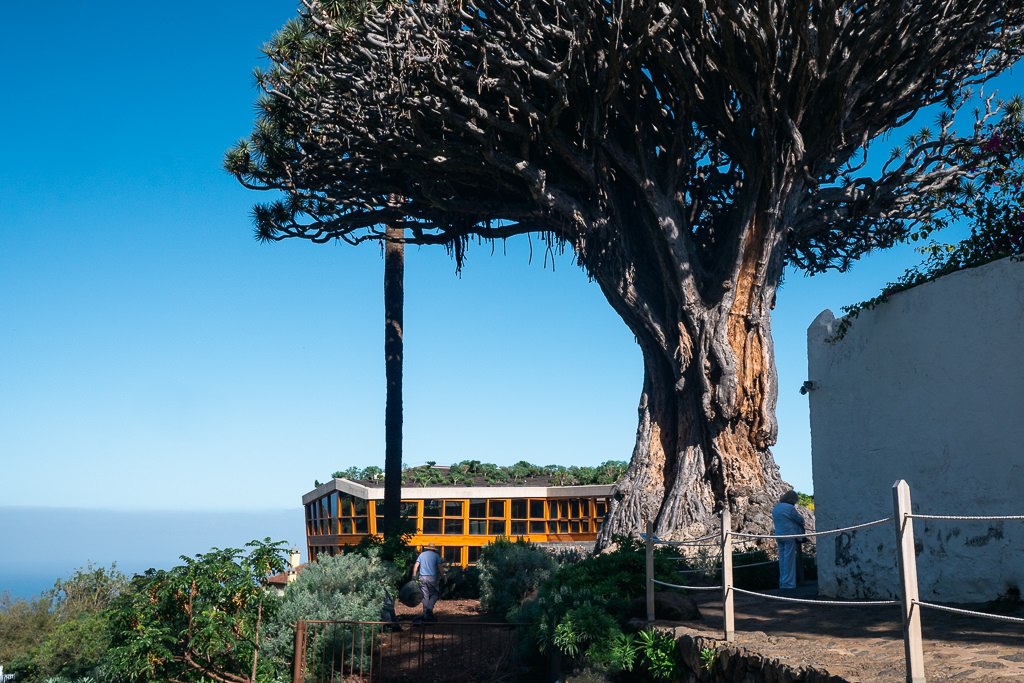 Next, head inland to the town of Icod de los Vinos. This small town is home to some of the best vineyards in Tenerife, so be sure to stop by one of the local wineries for a tour and tasting. You can also visit the world’s largest dragon tree while you’re in Icod.

From there, continue on to La Orotava, home to some beautiful architecture and lovely plazas. While you’re in town, be sure to visit the Museo de la Historia de Tenerife for a glimpse into the island’s past. 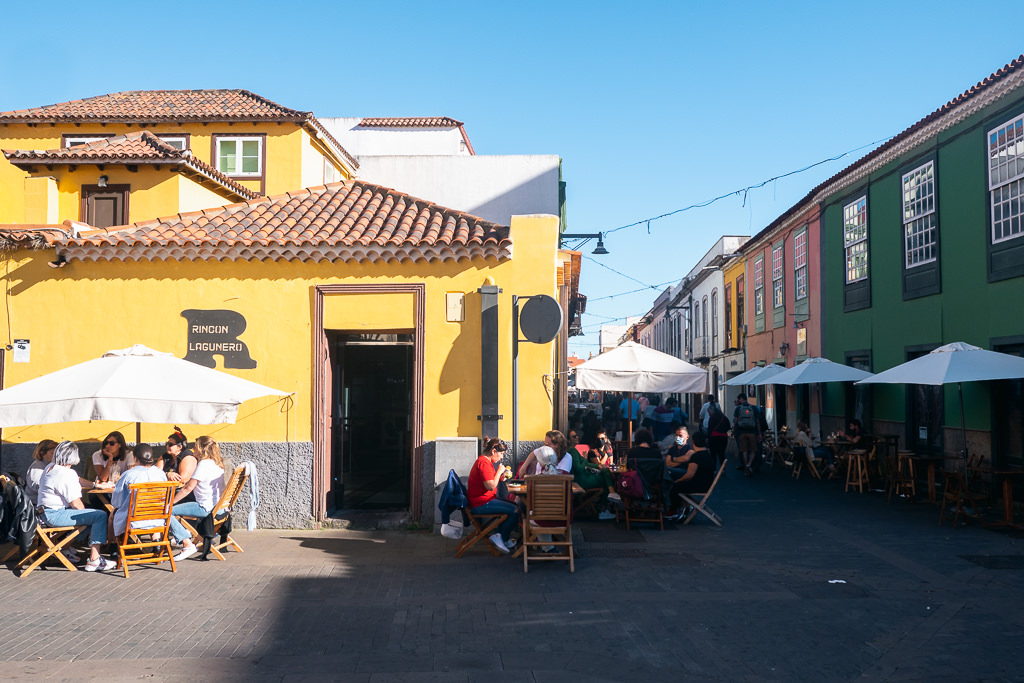 If you’re looking for an adventure, consider taking a road trip through Anaga park in the northeast. This route will take you up through the mountains, and you’ll have plenty of opportunities for hiking, sightseeing, and wildlife watching.

The first stop on this road trip is the town of La Laguna. This charming colonial-era town is home to some beautiful architecture and lovely plazas. While you’re in town, be sure to visit the Cathedral of La Laguna and the Museum of Science and Technology. 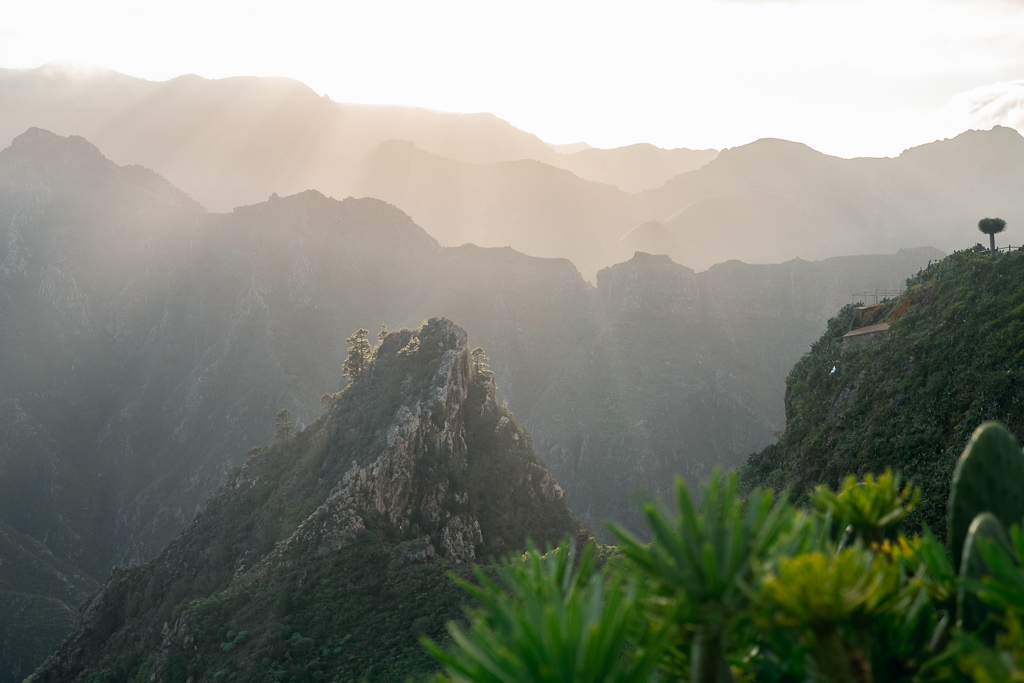 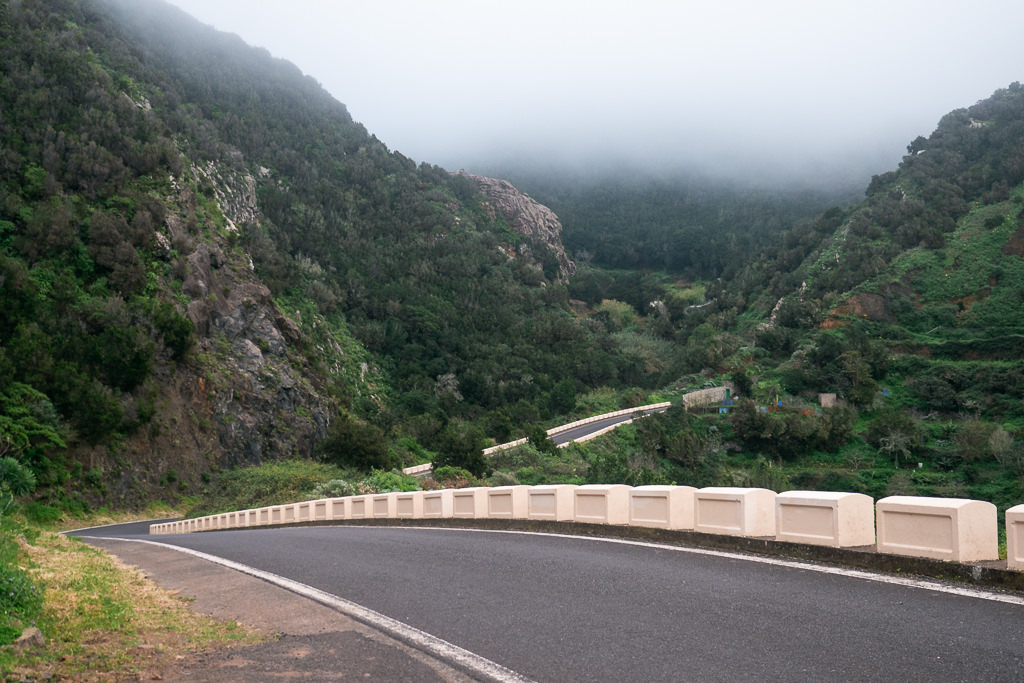 From there, head north into Anaga Rural Park. This area is known for its lush forests and stunning mountain views. Be sure to stop by the Cruz de Carmen viewpoint for some amazing views of the surrounding area.

The final stop on this road trip is the town of San Andrés, a small fishing town on the coast. This town is home to some of the best seafood on the island, so be sure to stop by one of the local restaurants for a bite to eat.

To experience one of my favorite road trips, you’ll need to drive through the Parque Nacional do Teide in the central crater. This route will take you up to the summit of Mount Teide, which is the highest mountain in Spain. be sure to stop at the cable car station on your way up for a ride to the top of the mountain.

Once you reach the summit, be sure to stop at Roque Cinchado for some amazing views of the surrounding area. From there, head back down the mountain and finish your road trip in the town of La Orotava. 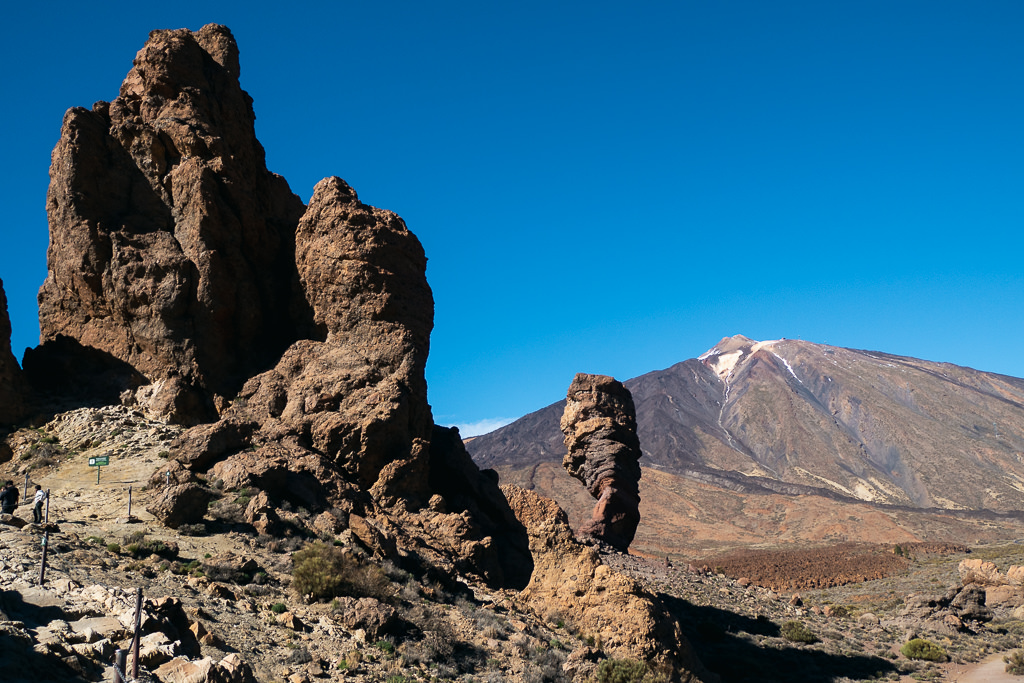 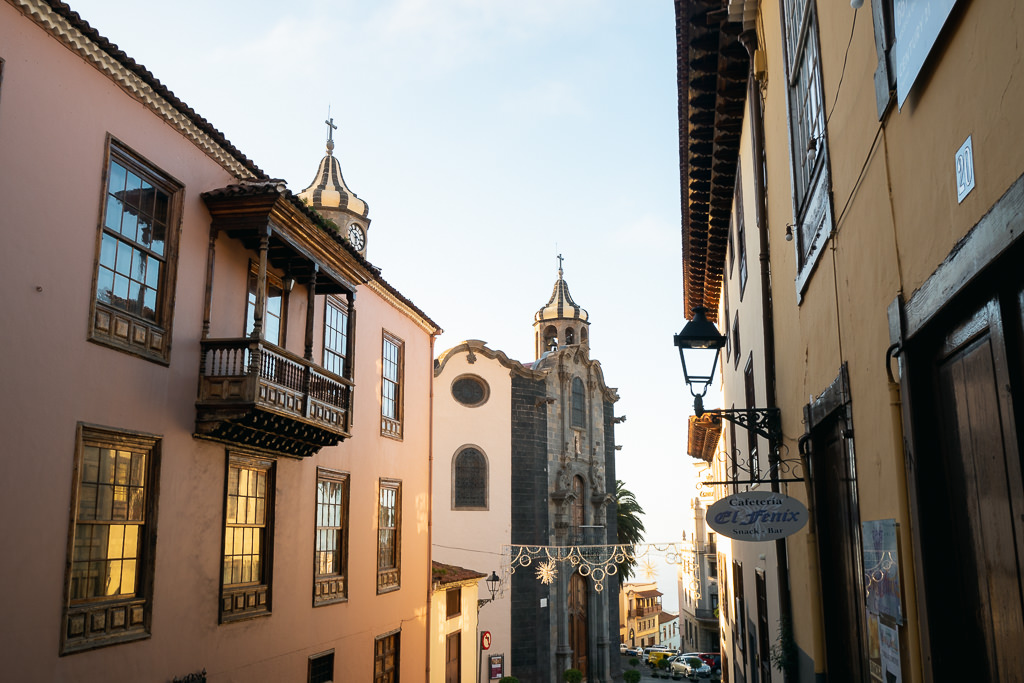 No matter which road trip you choose, the island of Tenerife offers some stunning scenery, proving that Tenerife is more than just beachside fun. So what are you waiting for? Hit the road and explore the island! 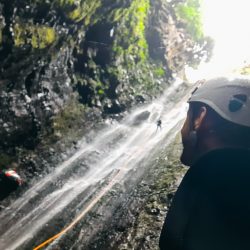 An Explorer’s Travel Guide To Madeira 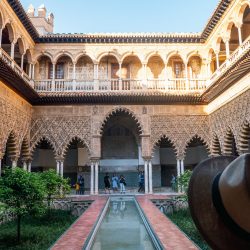 Dig deeper into the Canary Islands

There is SO much to discover on the Canaries, so don't miss our other in-depth guides to help you plan your trip.

See all articles in Canary Islands