Cape Verde: 7 Reasons Why It Should Be Your Next Travel Obsession 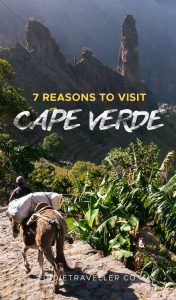 What if I told you there’s an archipelago that few travelers know about that’s filled with the most incredible hiking trails, home to a friendly and colorful culture, surrounded by seas filled with whales, dolphins, and other life — and is unravaged by mass tourism?

Would that maybe capture your interest?

Alright, so I need to tell you about Cape Verde.

Like, really need to! Because my recent trip there was among the most fun I’ve had in ages. 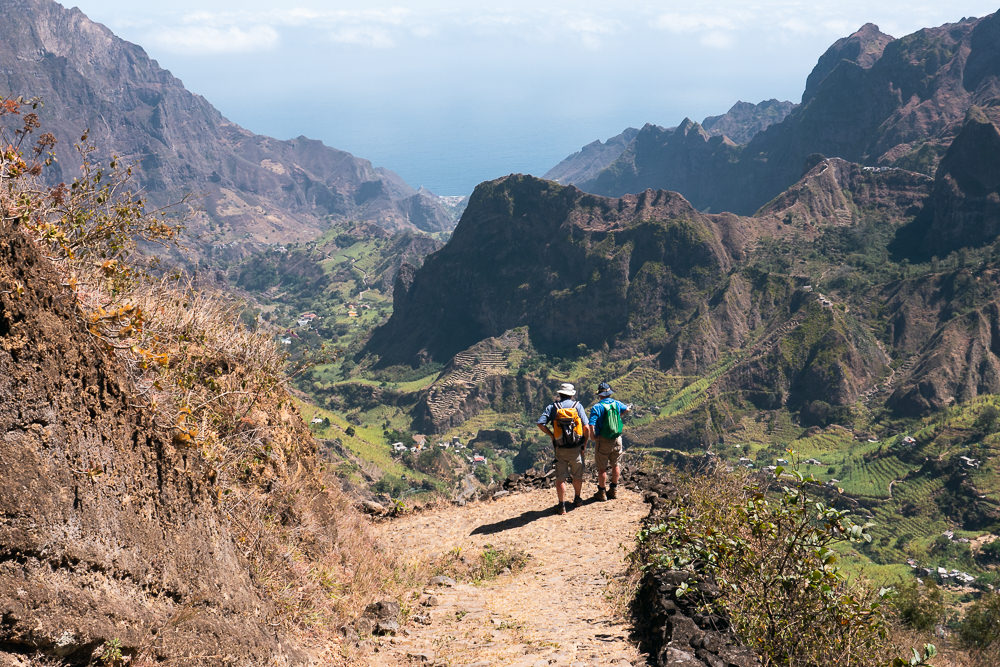 I’m aware though that Cape Verde is a relatively obscure travel destination. If you struggle to point Cape Verde on a map, you surely aren’t alone. In fact, quite a few travelers I met in Cape Verde said they knew hardly anything about it before they visited.

I should probably back up a bit and tell you what and where Cape Verde is — and, of course, why you should immediately put it on your travel list.

1. It’s something a bit different

One of the things I liked most about traveling in Cape Verde is that it’s not on the usual tourist map. It’s a tropical destination, but it isn’t some hyper-touristed place like, say, Bali, Thailand, or the Yucatan.

Tourism on Cape Verde is mostly small-scale and authentic. If you ask me, I think it’s an underrated little gem. 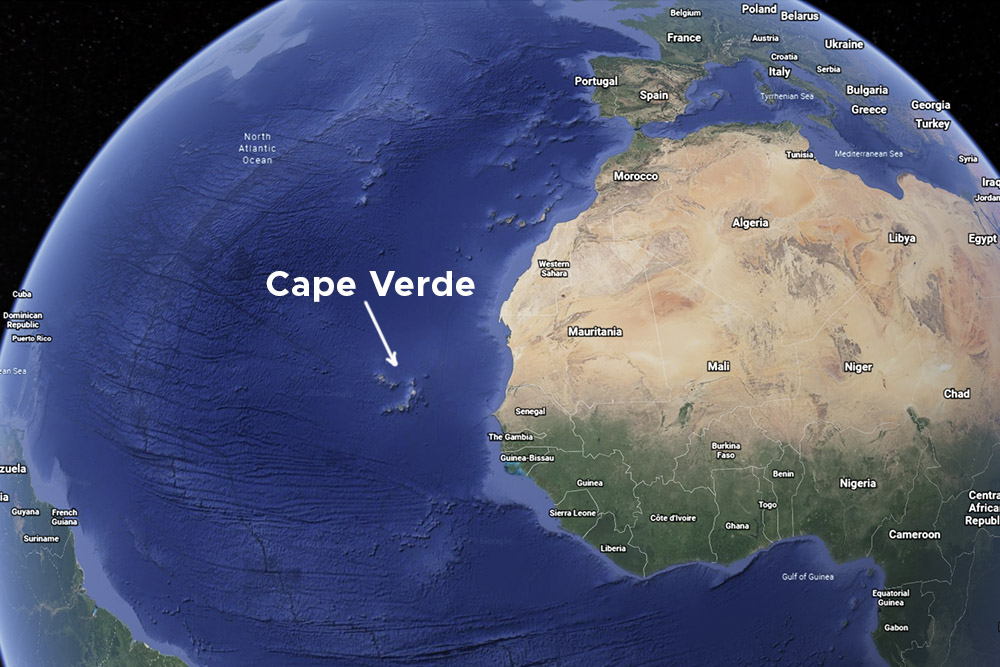 Cape Verde is a chain of ten islands in the Atlantic, just west of Senegal and Mauritania. The original Portuguese name of the country is Cabo Verde, meaning ‘green cape’, though most of the rugged islands consist of dark volcanic rock. It’s a small country, having only about half the surface area of Spain’s Canary Islands further north, or about one-and-a-half times that of Luxembourg.

Cape Verde was one of the earliest places to be discovered by Portuguese explorers, back in the 15th century. Unlike when explorers ‘discovered’ places already inhabited, Cape Verde was actually uninhabited at the time. Cabo Verdians today are descendants of colonists and mainland Africans.

A few of Cape Verde’s islands are known as resort destinations (mainly Sal and Boa Vista), but the archipelago is also great if you’re a cultural traveler or a backpacker, especially if you enjoy hiking.

I spent most of my time on Sao Vicente and Santo Antão. The latter is a true paradise for hikers, with numerous trails through dramatic volcanic landscapes and green cultivated valleys. I packed only a light carry-on backpack and took it with me on some of the hikes, moving from guesthouse to guesthouse. 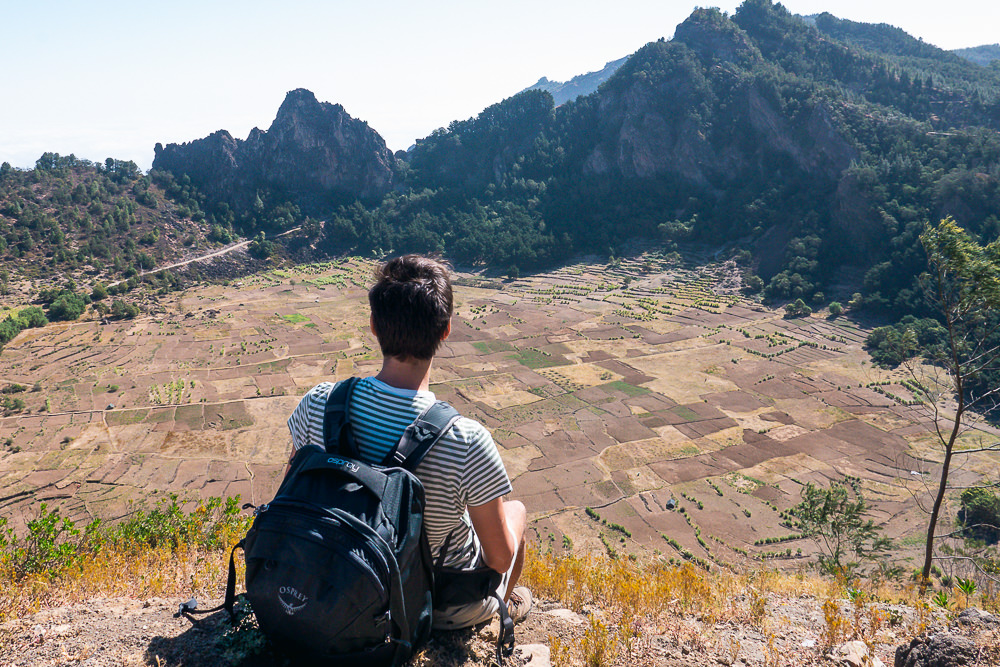 I enjoy many types of trips, but I’m really a backpacker at heart. Cape Verde really scratched the adventure travel itch for me!

From my articles about Santo Antao or off-the-beaten-path places like Tarrafal, you will surely sense that I felt very much in my element on Cape Verde. However, I think it’s also objectively a wonderful destination.

Although there are only a couple of hostels on Cape Verde and there isn’t really a backpacker scene, in some ways my trip felt like a miniature version of the kind of adventure travel I love to do in South America or Asia.

I met a couple of German travellers who I went on a hike with, had dinner with some French and Swiss travelers, met a few locals along the way, and did a lot of solo hiking as well. Every day had some new adventures in store.

3. The landscapes are sublime

During my hikes, I constantly had to stop for pictures, as the landscapes on Cape Verde are unbelievable (especially on the island of Santo Antao).

Once formed by volcanic magma, the dramatic landforms include very steep mountains, high cliffs, and deep valleys and gorges. Some parts you have to see to believe. 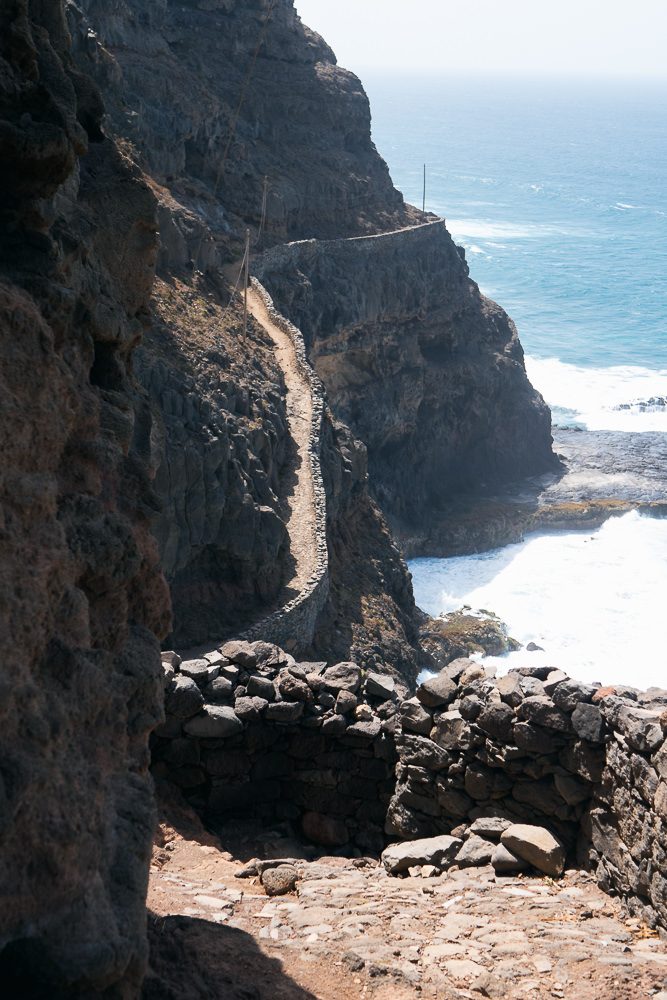 Most of the islands are dry and barren, but some of the ocean-facing valleys on Santo Antao are lush and green, filled with terraced fields and varied cultivation including banana, papaya, mango, and palm trees.

Cape Verde means ‘green cape’, but it kind of got that name by accident. Much of the islands look more like rocky moonscapes, though sometimes you’ll also walk through lush tropical gardens. 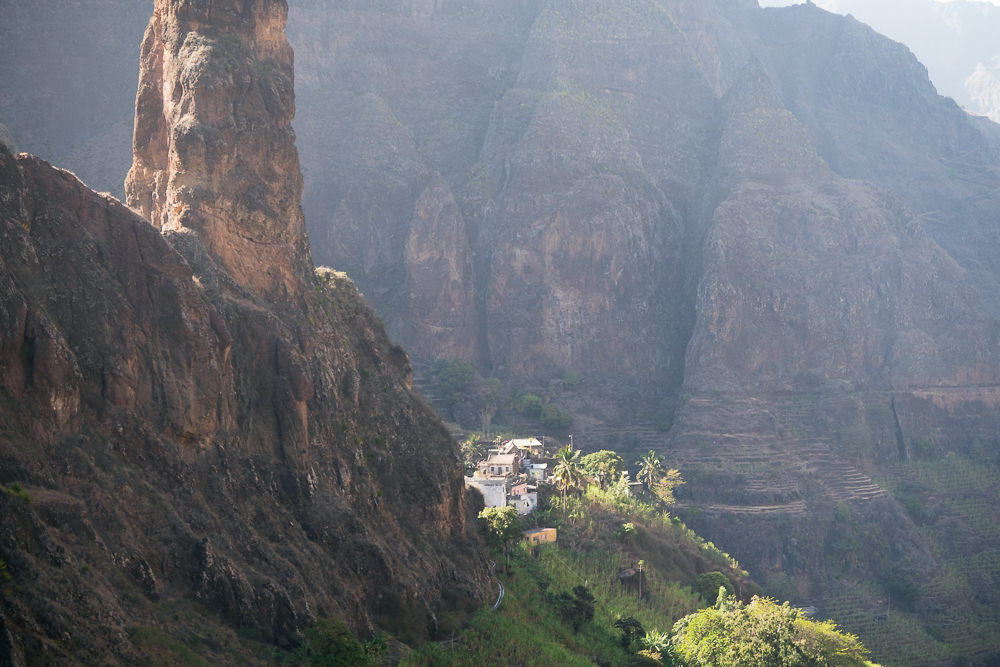 4. It has an interesting culture

A lot of influences got blended together on Cape Verde, leading to a diverse and colorful culture. You can easily see this in all the street art, music, and crafts. 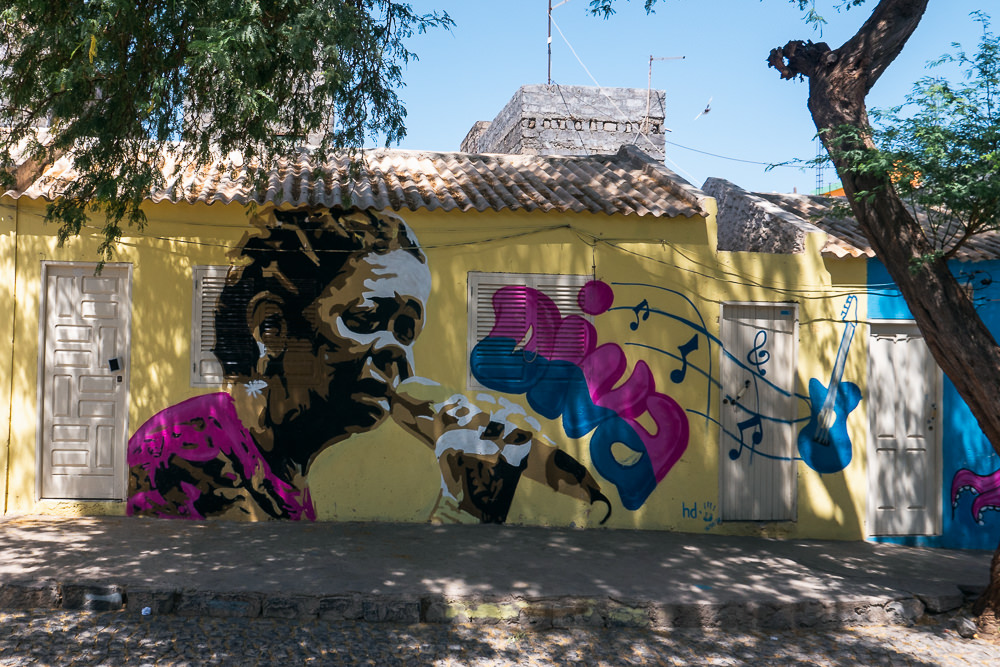 My original inspiration to go to Cape Verde came from a friend who took me to a Cape Verdean association in Lisbon where many emigrants from the islands go. It was a restaurant hidden on the top floor of an apartment building — one of those places you really had to know about. There was live music, people eating heaps of catchupa (a Cape Verdean stew), and many pairs dancing between the tables.

It was so lively and joyful. And that was just lunchtime on a Tuesday!

So I thought to myself, “wow, these Cape Verdians know how to have fun.”

I imagined all the islands to be as bursting with music as that Cape Verdian restaurant, which wasn’t quite the case. That incredible restaurant in Lisbon may have set my expectations a bit high. But music is definitely a big part of the culture, especially in the city of Mindelo on Sao Vicente. 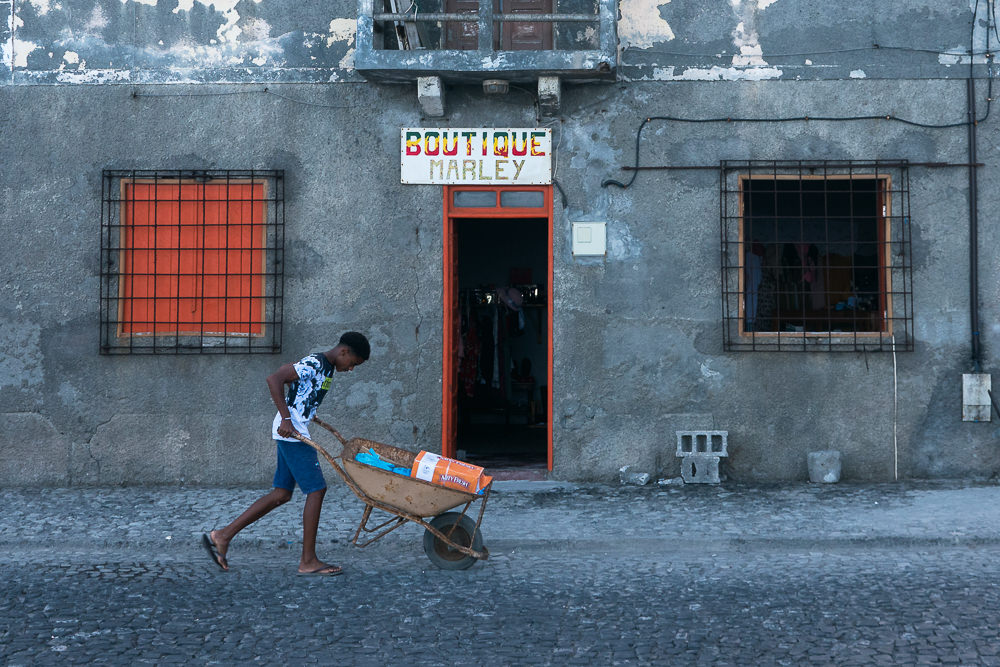 Mindelo is known to have the biggest music scene. It’s the birthplace of Cesaria Evora, the country’s most famed singer. At many (open-air) bars and restaurants in Mindelo, you can get a great taste of the local music.

Another interesting aspect to me was Cape Verde’s many connections both with Portugal (where I live) and The Netherlands (where I’m from).

The colonial connection with Portugal is obvious, but since Cape Verde is also a nation of emigrants, it has strong connections with many other countries. Many Cape Verdians worked in shipbuilding in Rotterdam, for example. Some of the sodade songs I heard in Mindelo related to the pain of having family working abroad. This emigrant culture reminded me a bit of The Philippines. 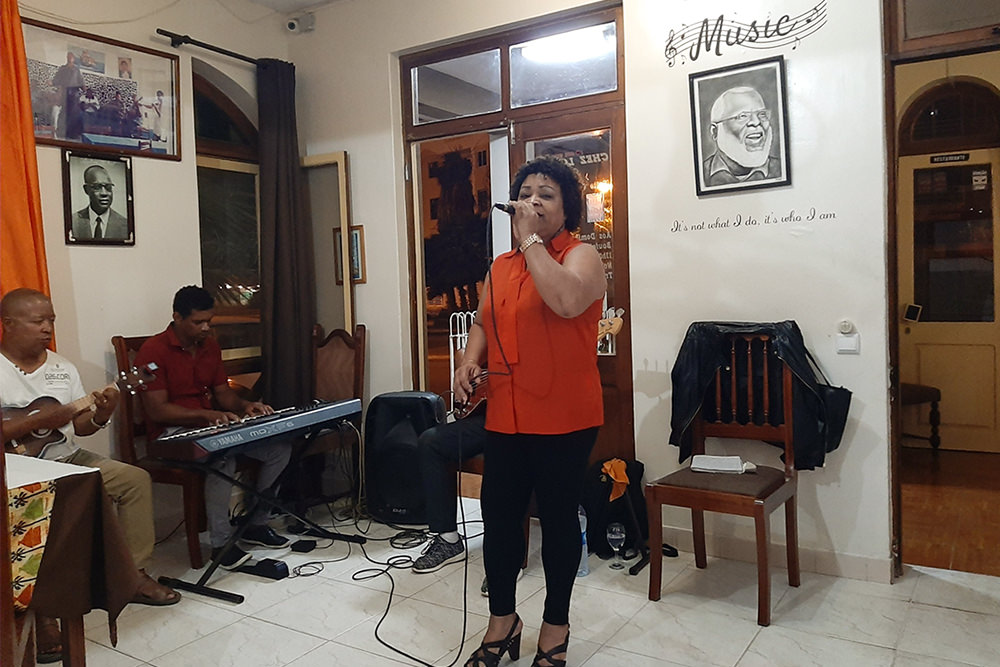 The Cape Verdian emigrants took home with them some of the languages and their favorite things from these countries. I was surprised to see Dutch frikandellen (a type of hot dog) on a food truck menu in Mindelo. While driving around Santo Antao I gave a lift to an old local man, who then started speaking to me in fluent Dutch; he’d been a sailor in Rotterdam and told me some great stories of sailing to places like Goa and Tokyo in the glory days.

I must confess I had been ignorant of the Cape Verdian diaspora, so it was fun to speak to locals and learn they had some family in the Netherlands, Portugal, and elsewhere. 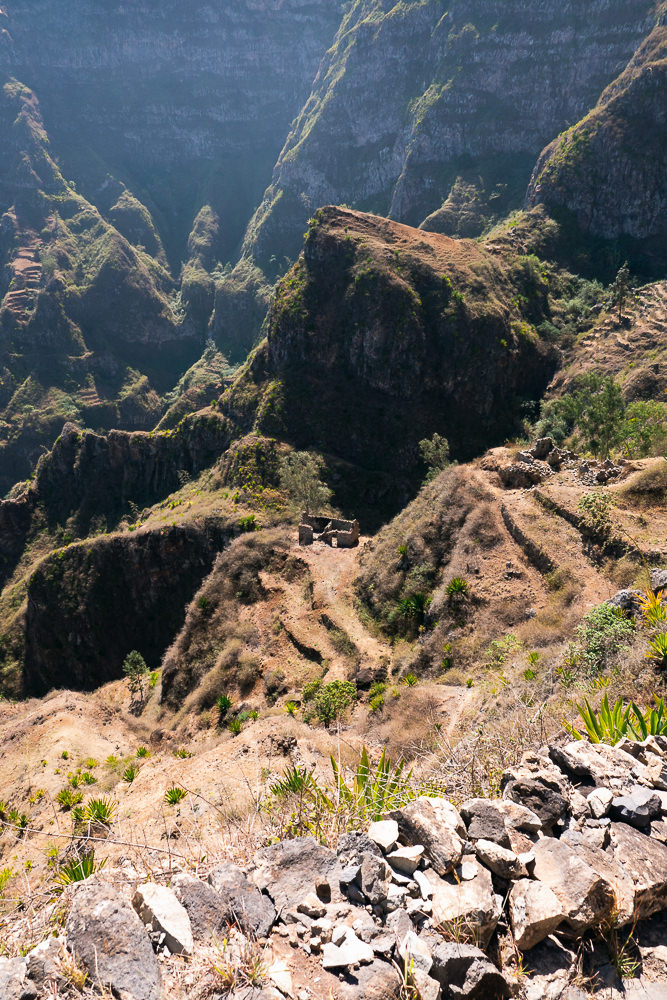 If you search for information about Cape Verde online, you might get the impression that it’s just full of all-inclusive resorts. This isn’t true!

Well, it is true that there is a package tourism industry focused mostly on the islands of Sal and Boa Vista, which has a number of large-scale beach resorts. Judging by the number of holiday flights to these islands, this must be where 90% of tourists go.

If you’re one of the other 10%, you’ll find that tourism is mostly small-scale and delightfully authentic. Almost all the accommodation on the islands I went to were locally run guesthouses, B&Bs, or eco-lodges.

If you’re a backpacker, don’t expect to find many hostels, as there are only a handful, mostly in the cities like Praia and Mindelo. Local guesthouses are luckily easy to find.

Cape Verde is not an ultimate cheapie destination, with certain prices fairly close to those in Europe. About €50 a day should be a comfortable budget; count on about €20 a night for budget rooms, the rest for transportation, food & drink. This will end up higher if you island-hop a lot, as then you’ll have to spend a lot more on flights.

But if you like a local vibe and wish to be away from mass tourism, Cape Verde will definitely tick those boxes.

The best time to go to Cape Verde is roughly from November to April. My trip was in February and I had lovely sunny weather throughout.

It’s about 6 hours flying from London, Paris, or Amsterdam, or 7½ hours from east coast USA. I live in Lisbon from where it’s just a 4-hour flight.  Cape Verde is perfect for breaking up a long winter — all without quite having to fly halfway around the world, especially if you’re from Europe. 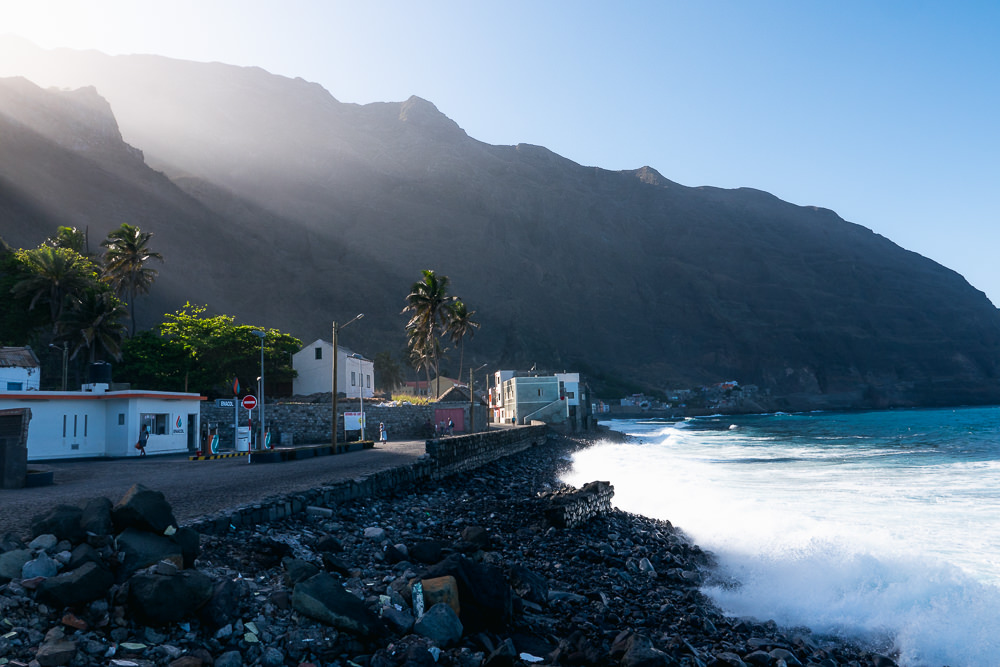 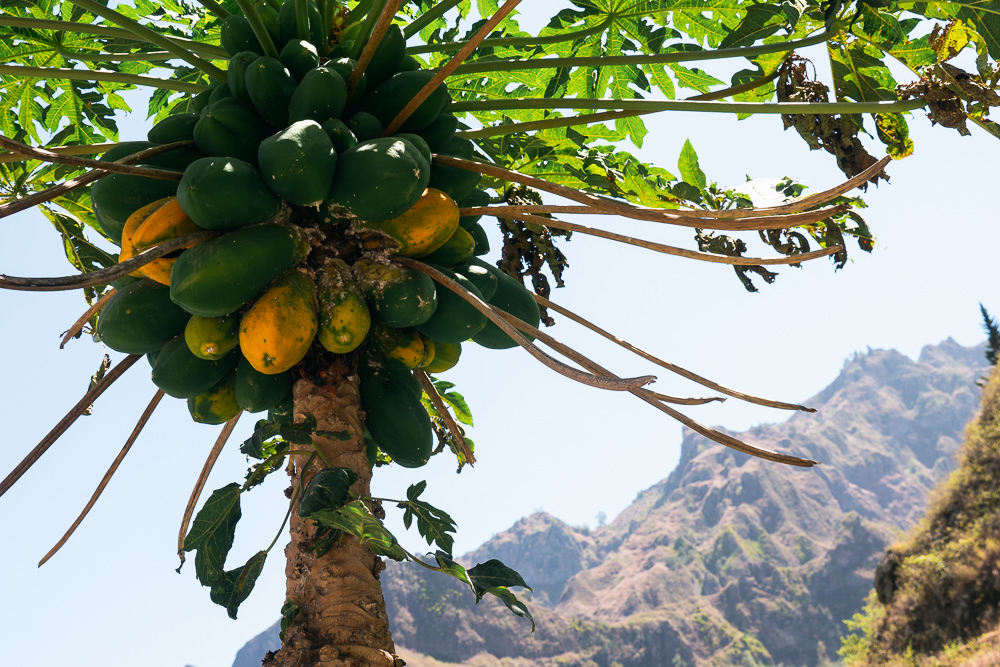 Through my research, I already knew that Cape Verde is known for its hiking trails, but I was surprised to find many more activities on the islands. On Santo Antao, there were canyoning, surfing, paragliding, scuba diving, and snorkelling tours on offer. Most of these were run individually by European expats who’d moved to the islands. 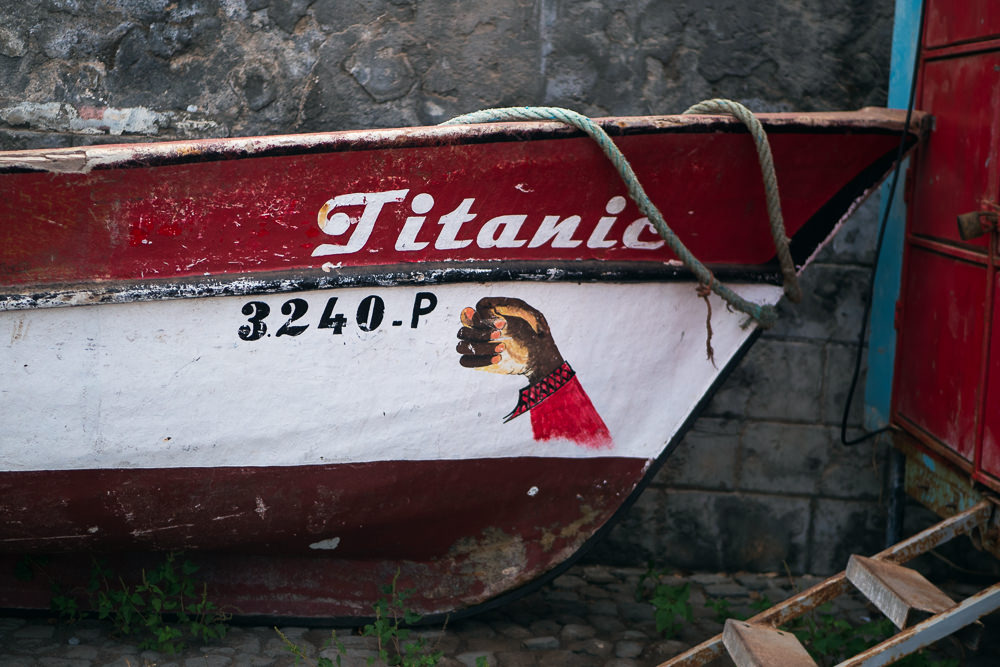 It’s cheapest and easiest to move around the islands by aluguer, which is the local flavor of shared minivan. I also rented a small 4×4 for a while to get to some more remote places. I had a blast driving my small but trusty Suzuki Jimny through lunar-like landscapes and to the isolated town of Tarrafal, which involved driving over rocky dirt tracks and across a beach.

All in all, Cape Verde proved to be a concentrated little nugget of travel goodness — and I ate it all up with delight. If you’re looking for somewhere different but potentially not too far to travel, then it absolutely needs to be on your list. 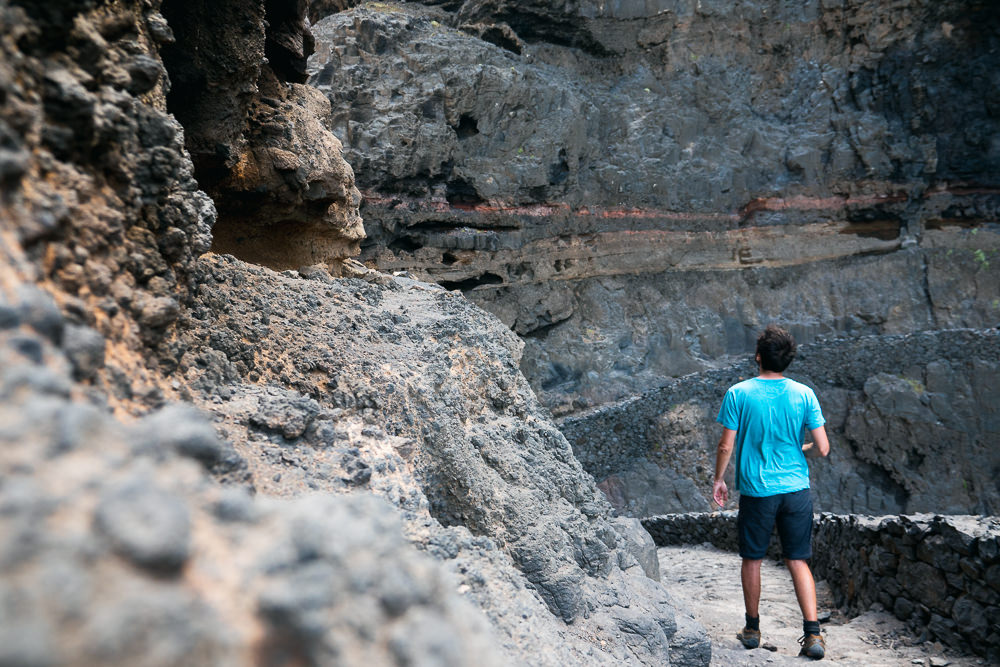 You can read a lot more about the island of Santo Antao (my favorite of the ones I visited). I also posted an FAQ about Cape Verde, tips for Sao Vicente, and some impressions of Tarrafal, a remote settlement on Santo Antao that was one of my favorite places. 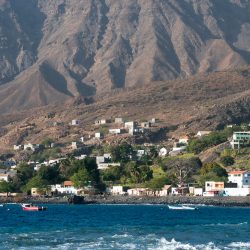 Cape Verde: Getting Away From It All In Tarrafal 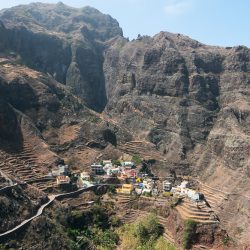 Planning a trip to Cape Verde?

Don't miss our other articles with travel tips and inspiration for your trip to Cape Verde!

See all articles in Cape Verde