What To Do In Theth + Tips For The Valbonë Hike

The town of Theth is the perfect base for exploring the Accursed Mountains, as Albania’s Alps are dramatically known. With idyllic scenes and epic hiking trails, it’s one of the highlights of Albania.

A new road has made Theth more accessible than before, though it remains quite isolated and remote. Few people live in these mountains and the nature is unspoiled.

Theth (also known as Thethi) is not so much a village with streets or a centre, but rather a collection of guesthouses, cabins, and campgrounds spread out across a valley. It feels a bit like an Alpine summer retreat, though with an authentic Albanian touch. 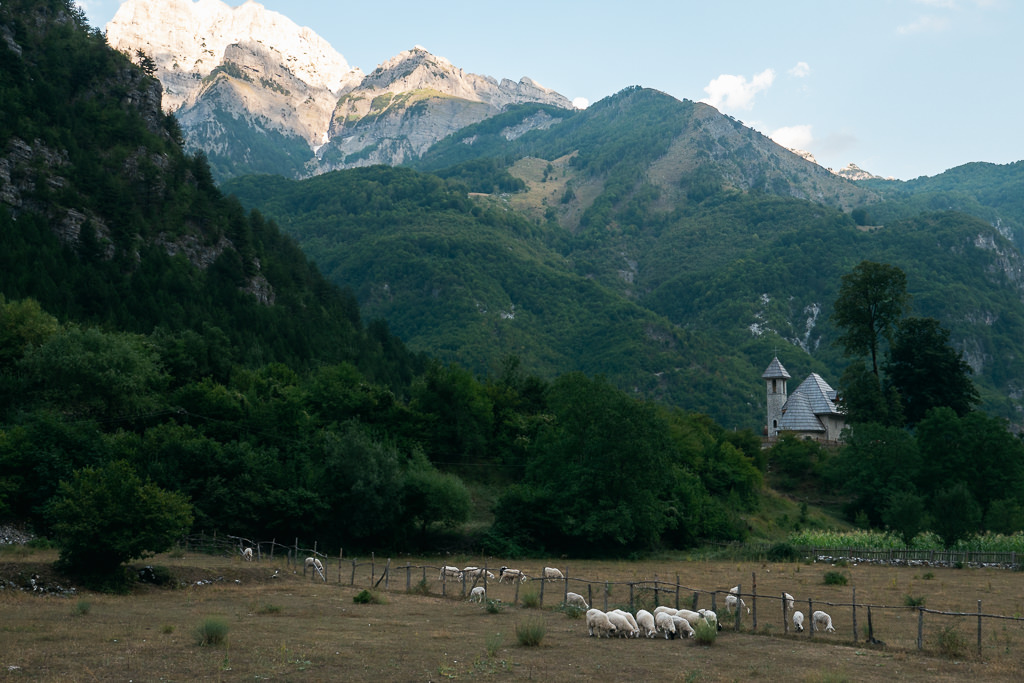 You’ll be sure to see incredible mountain sunsets, beautiful waterfalls, and will have a chance to stay in homely small-scale accommodation. This makes it one of best places to visit in Albania.

Read along for the best things to do in Theth, plus tips for the wonderful hike to Valbonë, which for many is the main reason to visit Theth. 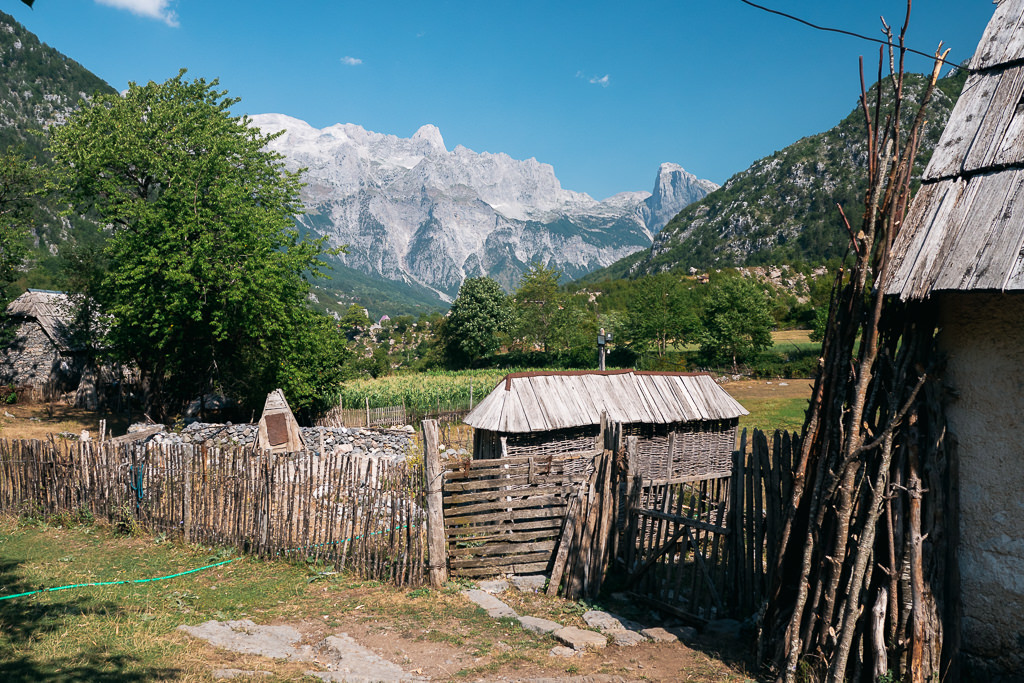 Theth is accessible primarily by a single asphalted road, the SH21. This road used to be very bad, but it was improved in 2021, making Theth a lot more easily accessible now.

Feel free to disregard any old reports about the road as it is really just fine now. I’ve heard it may still get closed in winter due to snow though.

A minivan leaves Shkodra for Theti at 7.30 a.m. The journey takes about 4 hours. Ask your hotel or guesthouse in Shkodra for details or to buy a ticket. 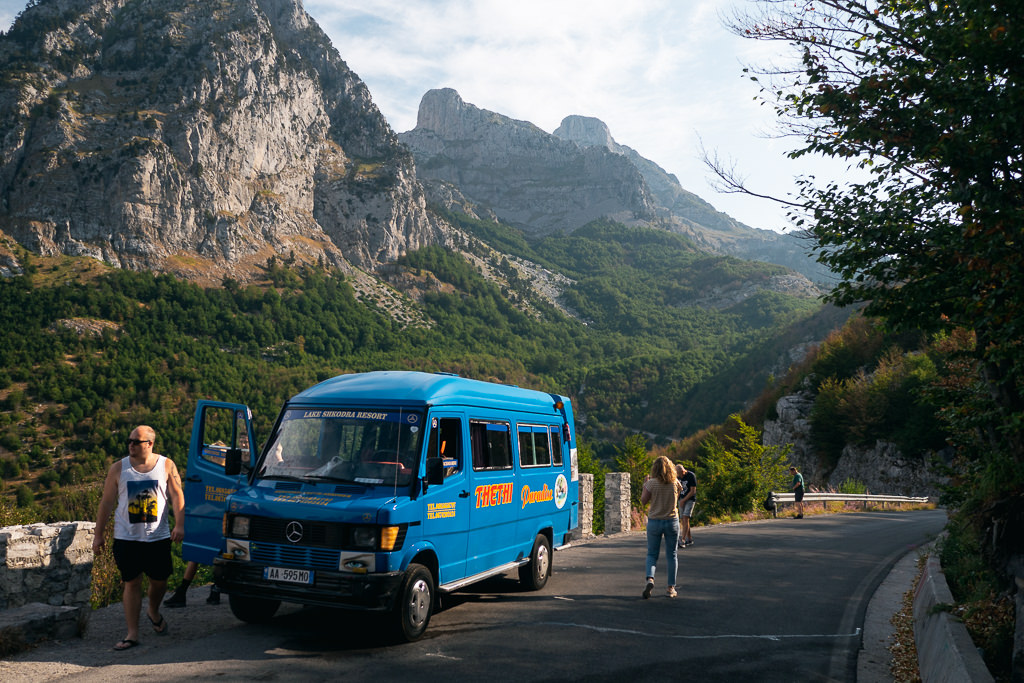 There is also a very offroady one-lane gravel road to Theth through the south that could take at least twice as long — for adventurers with a 4-wheel-drive only.

Tip: There are no banks or ATM’s in Theth. Get sufficient cash out before heading to Theth!

Things To Do In Theth

See the Church of Theth

This late-19th-century church (recently restored) is an iconic element of Theth, featuring in many photos of it.

It is in fact very photogenic with the mountains behind it and the hickety-pickety fences and hay bales in the fields around it. It’s an idyllic scene worth taking in, especially at sunset. 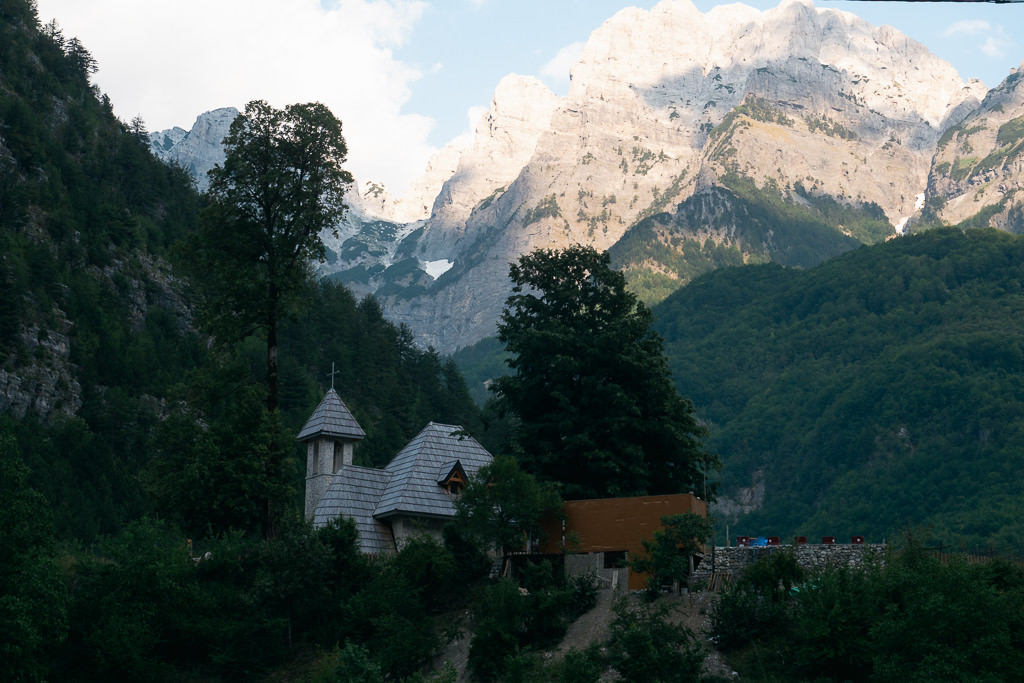 From Theth, it’s easy to visit the Grunas Waterfall by foot. It takes at most 45 minutes to get there. It’s a nice spot and the trail to it is highly scenic.

On a rock by the waterfall I saw some graffiti saying ‘free wi-fi’. I thought this was a joke, but one of Albania’s mobile providers actually set up a wi-fi hotspot. If you desperately need to get online, here’s your chance. 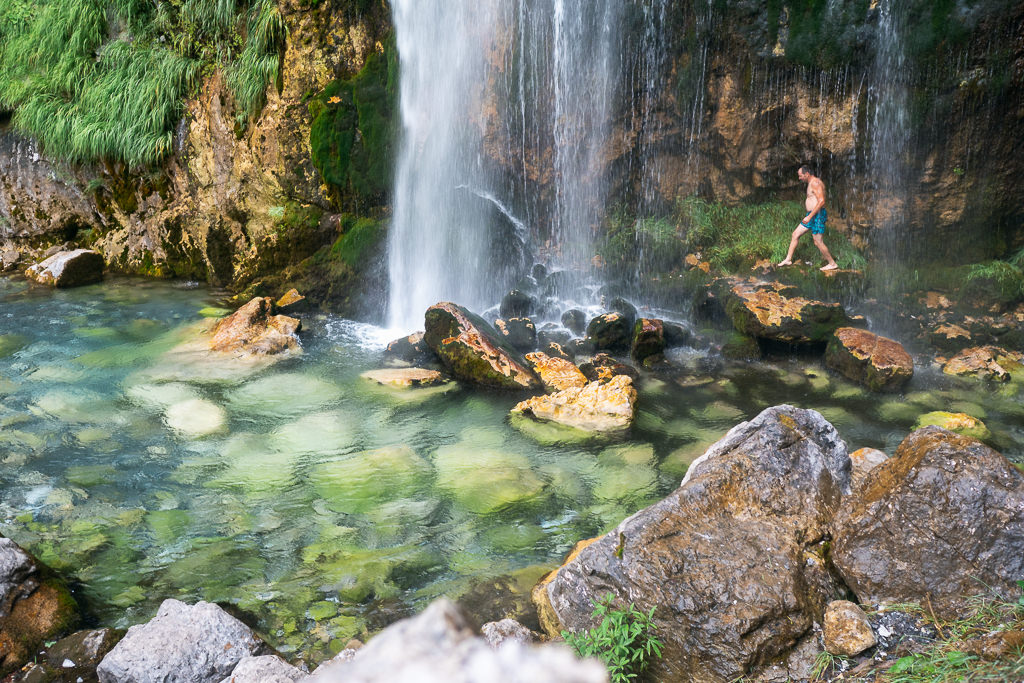 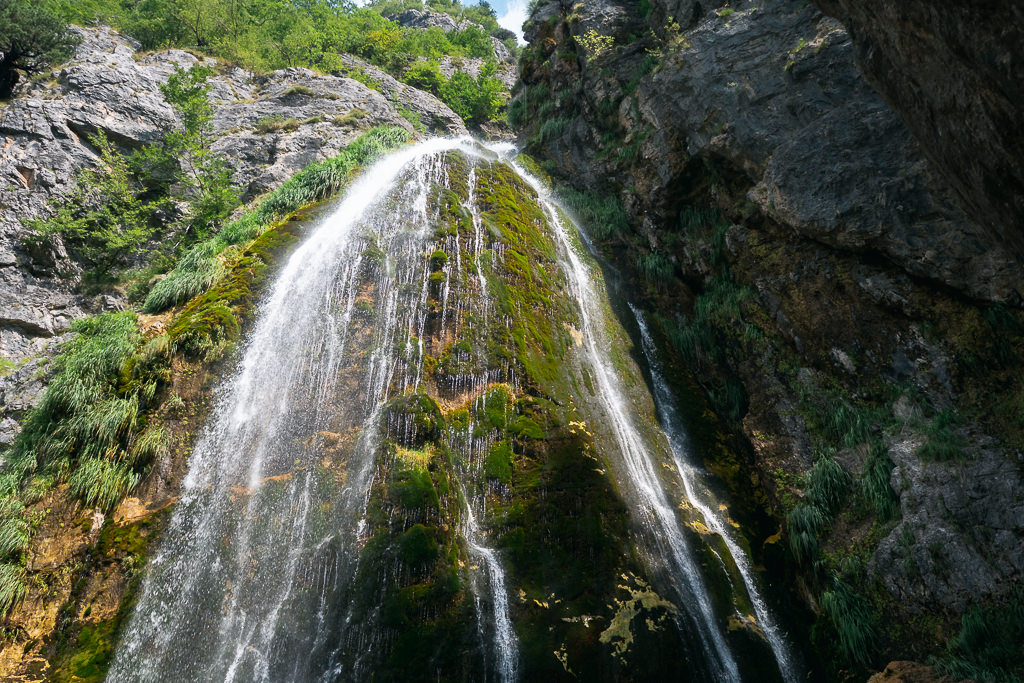 Drinks by the river

As you head south in Theth you’ll come across a few little cafes. I enjoyed stopping at Kunora e Grunasit, which is part cafe and part camping ground.

Here you can sit under the trees, swing in a hammock, and watch the river flow through Theth valley. 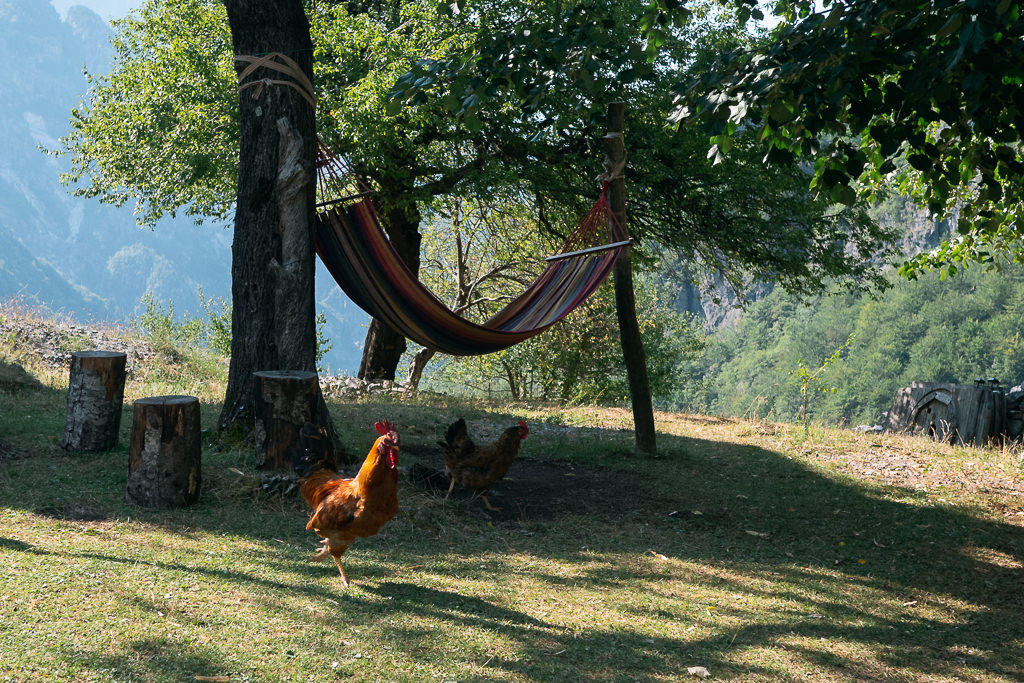 Hike to the Blue Eye

The Blue Eye is another waterfall that’s hidden deeper in the forest. It’s not to be confused with another “Blue Eye” near Sarandë on the coast.

This waterfall is a lot further from Theth. Hiking there took me about 3 hours one way and it was very scenic, running mostly along the river in Theth valley. 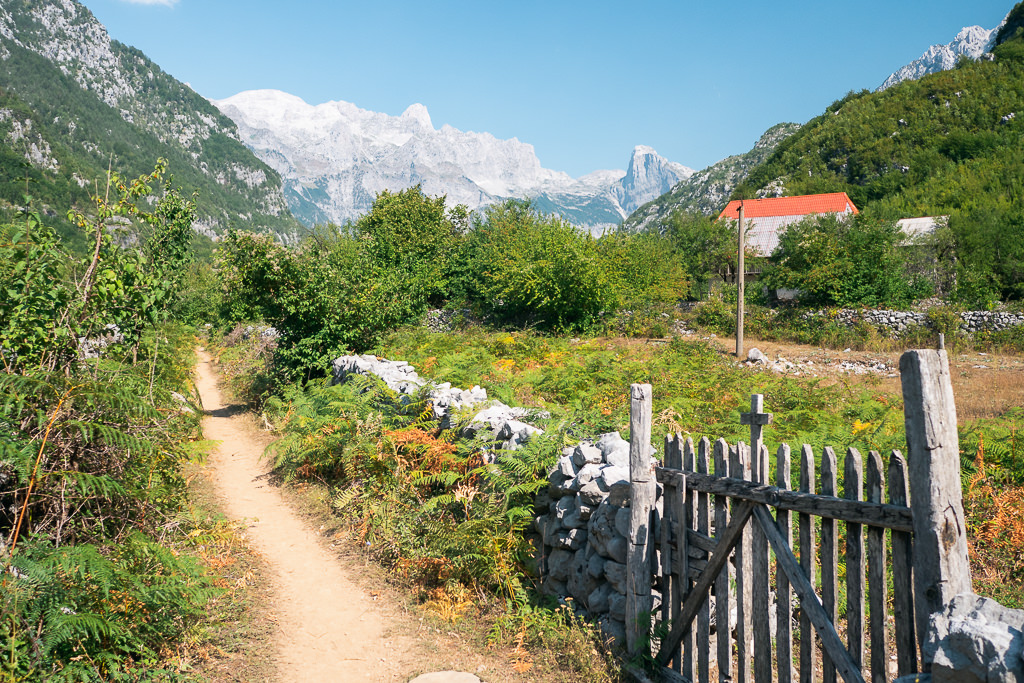 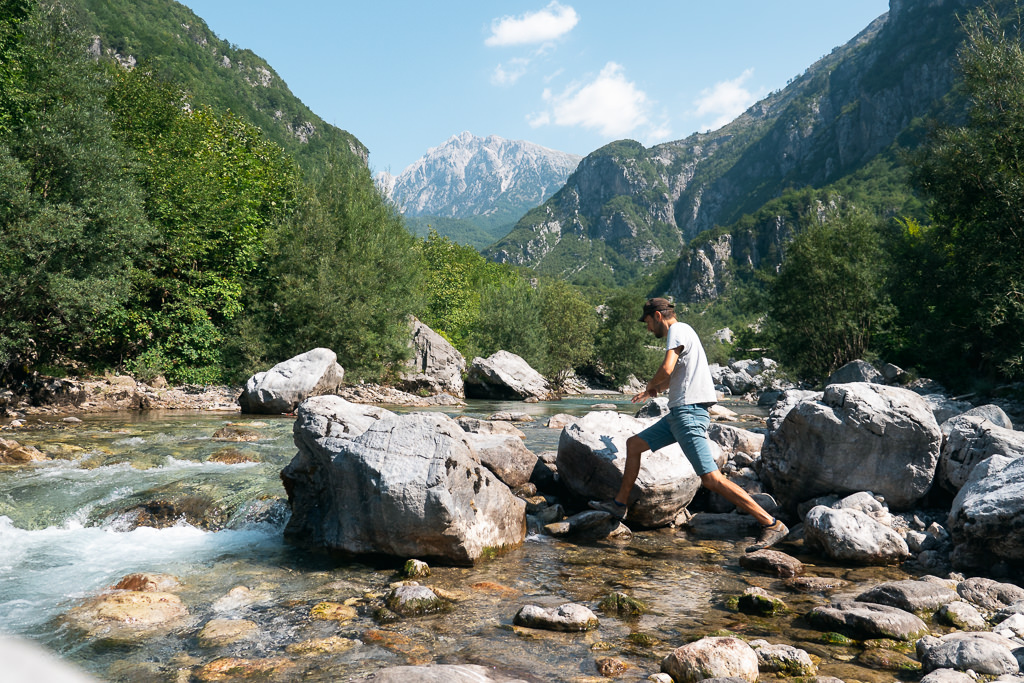 Important tip: the hiking trail is on the east side of the river. On the west side is a dusty gravel road, which is not nearly as fun to walk! Be sure to take the east trail through the forest.

On the way you will pass a pretty epic gorge, with a rickety wooden bridge across it. 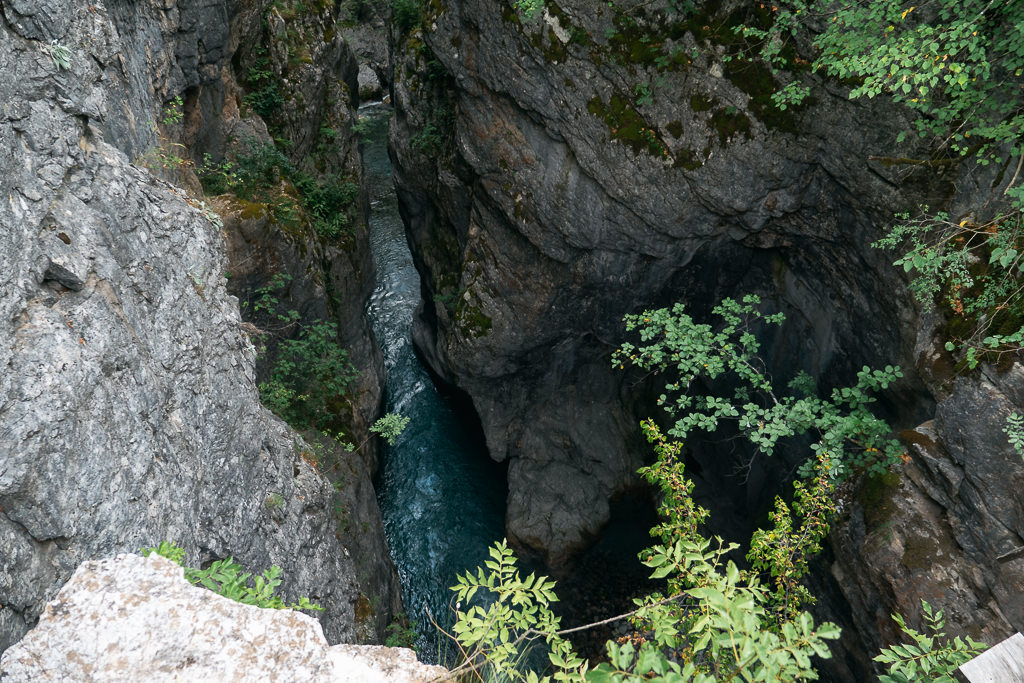 The Blue Eye waterfall was quite a busy spot in August with lots of locals having picnics or Instagram sessions in front of the fairly small waterfall. While I wasn’t bothered by the small crowd, don’t expect it to be a very solitary hike.

The first part of the hike along the river (until reaching the parking lot) was very quiet and peaceful however. 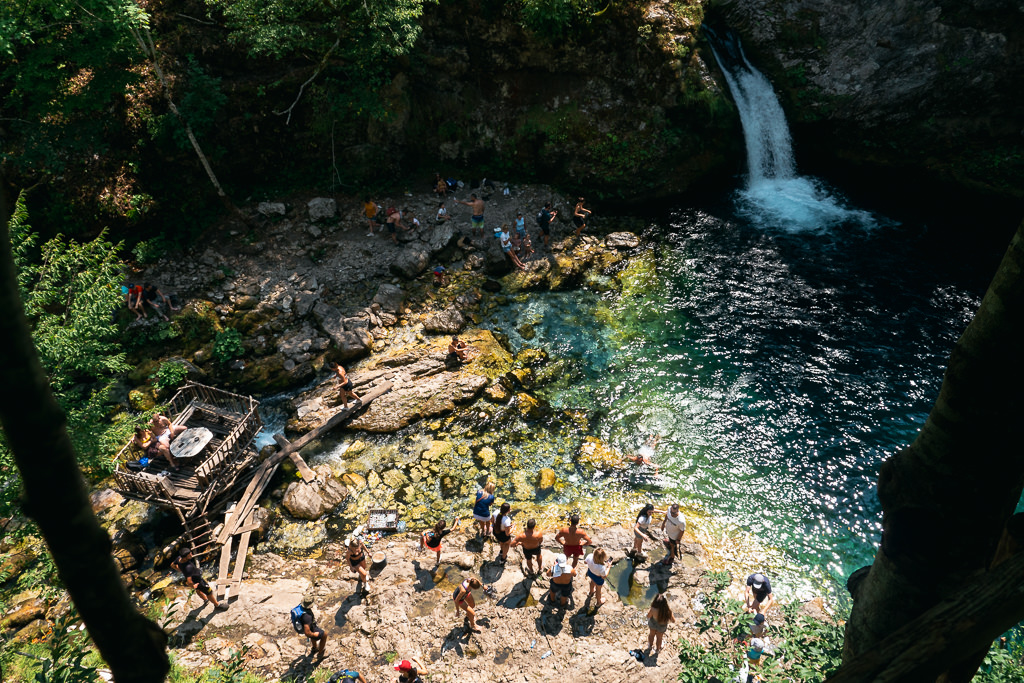 One family that I met spent the entire day at the Blue Eye as the kids loved to play in the water; I was fine with staying about half an hour. There is a little restaurant at the Blue Eye serving simple Albanian food.

Since I’d already walked so much, I got a 4×4 to take me back to Theth.

Tours from Theth can take you back and from the waterfall, reducing the hiking to only about 1 hour there and back from the parking area. 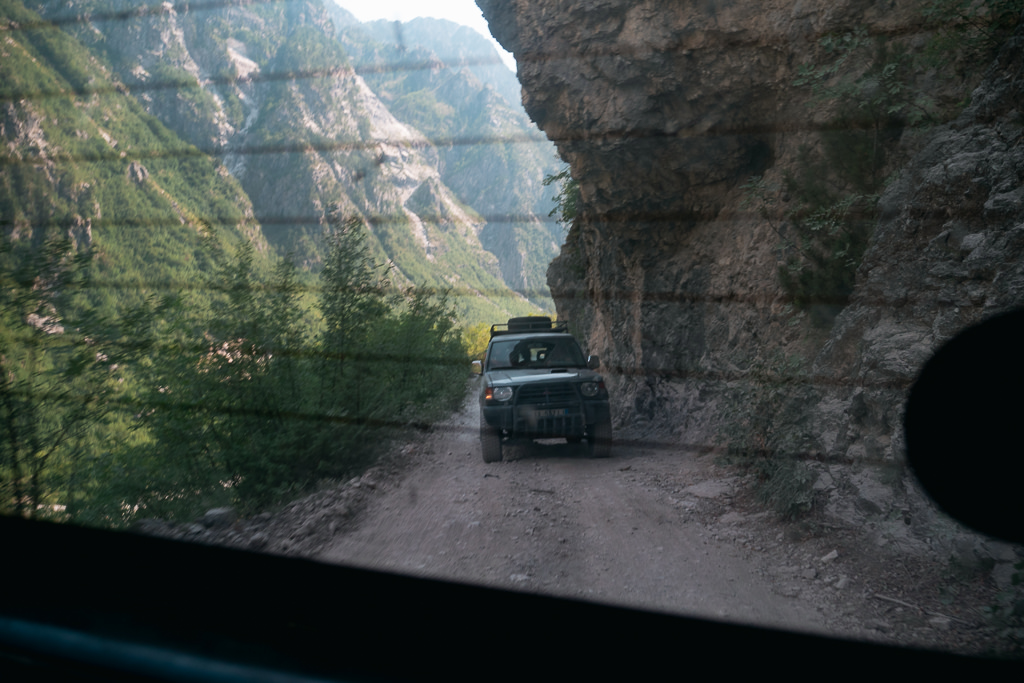 Other hikes from Theth

I’ve seen several resources claim there are at least 7 hikes starting from Theth, though it wasn’t so clear to me which some of these are. I can only count the Blue Eye and Valbonë hikes, but perhaps if you research it more, you will find other hiking options.

The most popular hike by far is the hike to Valbonë. It’s a very well-marked trail and you’ll surely see a few backpackers setting off to Valbonë in the morning. This trail is point-to-point between the two villages and is also a part of the Peaks of the Balkans through-hike.

How to do the Theth-Valbone hike

The Theth-Valbonë hike is the main reason why many come to Theth. This trail can be a bit demanding but it’s sure to reward you with some spectacular vistas. 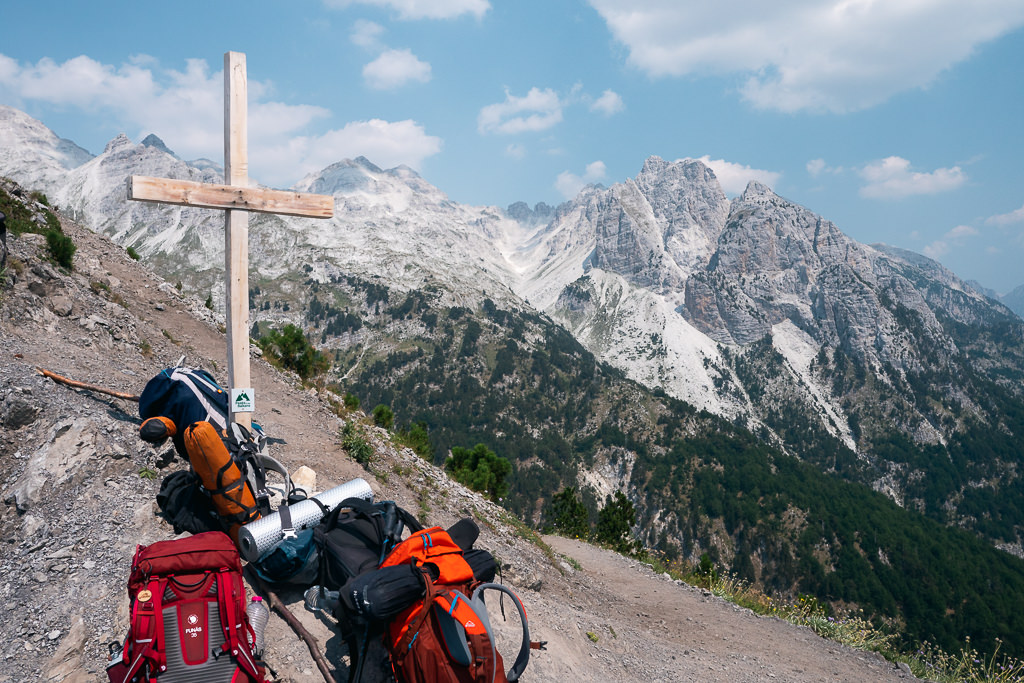 How long does it take?

It depends. I’d say it can last anywhere from 6 to 10 hours.

Why the big variance? Well, the hike can be longer or shorter depending on your start- and endpoint, so you will see many different durations mentioned on blogs and official sites.

Another factor is whether or not you choose to take a side path to a waterfall about halfway along the trail, which can add a bit more to your overall time. Apart from this, each hiker of course also has their own pace, accounting for some of the differences in the reported duration.

It took me about 8 hours with plenty of breaks. I love to hike and I’m an experienced hiker, so your mileage may vary.

Both Theth and Valbonë are quite spread-out towns. If I’d stayed at the furthest ends in each town, it probably would have added another hour to my hike. If your accommodation is in the most favourable spots in both towns, the hike’s duration might be closer to 7 hours.

Is it a difficult hike?

Yes and no. Starting in Theth, the first two hours are quite demanding, as you quickly ascend by about 1000 meters. I had to take breaks every 15 minutes or so.

Once you reach the first coffee hut, the inclination becomes less intense. When you reach the top after about two hours, the rest of the hike is easy.

Overall I think it’s a fairly stiff hike but not extreme. I met a family with kids around 6 or 7 year’s old who did it, though they were definitely the outdoor types. I also met a couple who did the whole hike with their small dog walking beside them — they said he was a better hiker than them.

That said, if you don’t generally hike, or have a poor fitness level, then it won’t be that easy. The initial part up the mountain made me curse a few times. I’d say the hike is of medium difficulty overall. 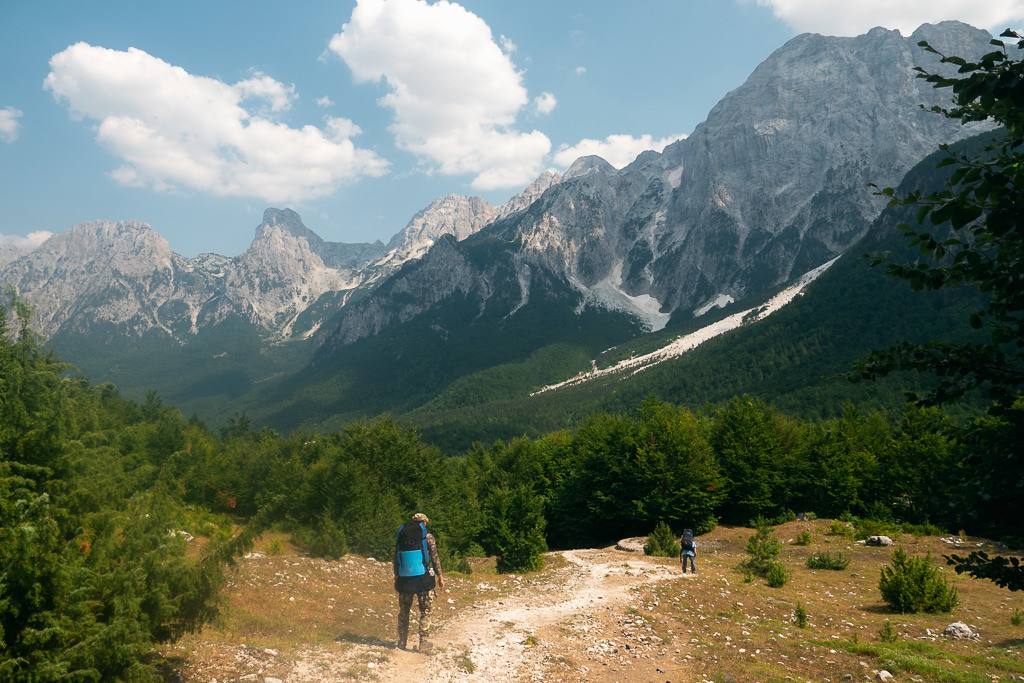 Do you have to start in Theth?

The Theth-Valbonë hike can be done in either direction. You will find many arguments online for one being better than the other.

Personally, I liked starting in Theth so that you get the biggest ascent out of the way first. I also liked that the day after completing the hike, I could just chill on the Komani ferry back to Shkodra.

Others prefer setting off in Valbonë, which starts through a rocky valley that is highly open and exposed to the sun, so it may be nicer to do this part in the morning when it’s not so hot.

Both have their pros and cons and it probably doesn’t matter too much where you start. I’d say go with whatever makes the most sense for your overall Albania itinerary.

Are there facilities on the trail?

There are at least two cafes along the way where you can buy some drinks and Albanian snacks. Just don’t rely on them being open, particularly if you’re hiking outside of high season, and bring enough water and food.

The hike does not pass through any villages, so be sure to bring what you need as you’ll be in nature for almost the entire length. 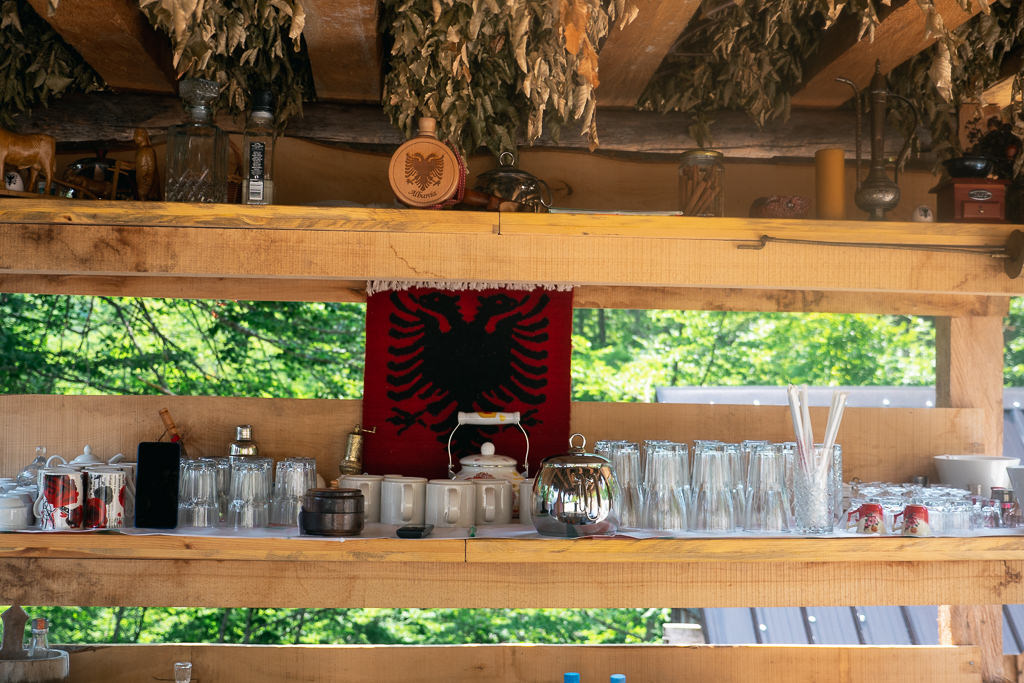 Yep. The trail is well-marked all the way. It is still a good idea to have a map on your phone (like using the maps.me app).

You don’t need to hire a guide at all to follow this trail. There are guides available though, as well as mules to carry luggage or children. 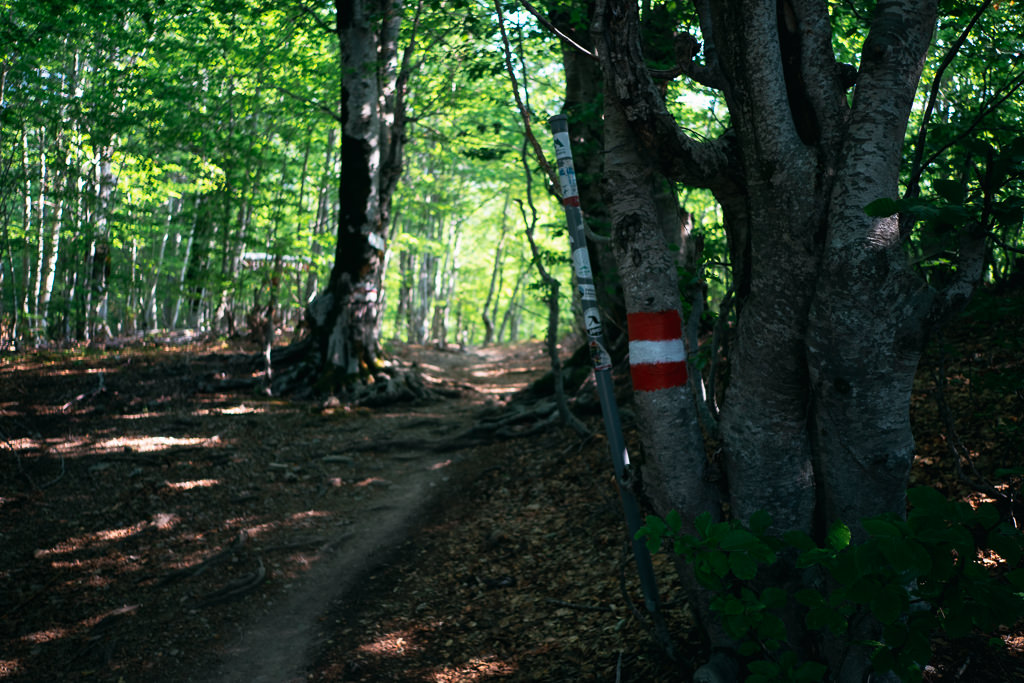 Can you hike it solo?

National parks typically advise against hiking solo. I still did this hike by myself as I hike often and there were many other hikers on the trail (during summer).

I enjoyed my solo hike a lot and it’s not a dangerous trail at all, though if you have any doubts it could be better to hike together. I recommend the trail for anyone who likes solo hiking. 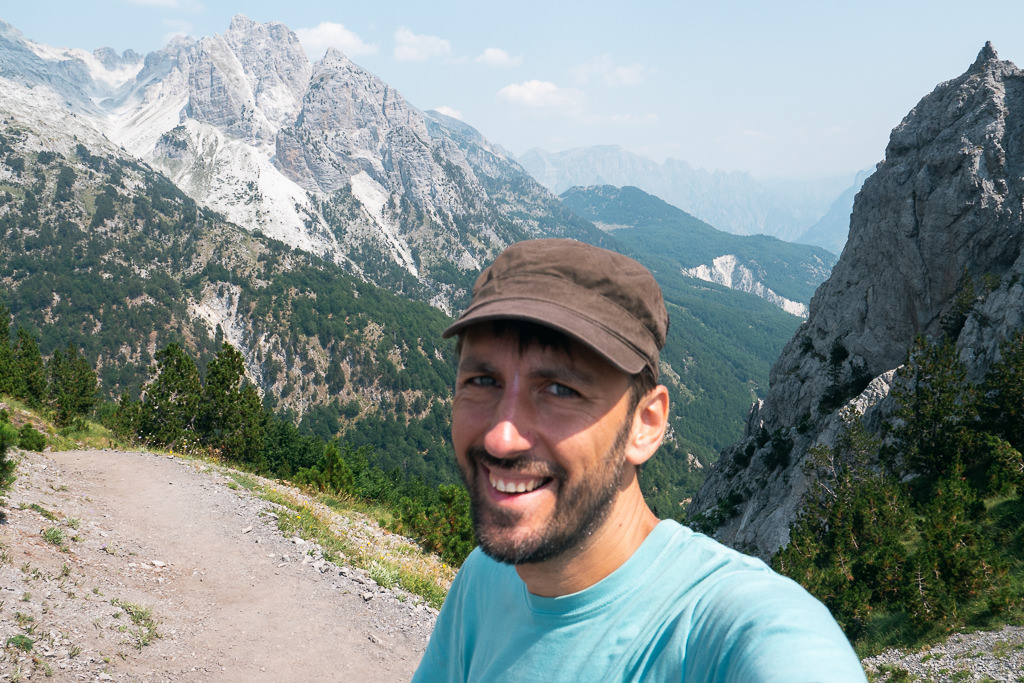 Stay in Theth or Valbonë?

If you’re wondering where to spend a bit more time before or after your hike, I think Theth is the more scenic of the two towns. I liked spending two nights there so that I could rest and also see the waterfalls.

Valbonë is nice too but there isn’t as much to do there.

Can you make a circular route?

On foot, not really. The only way to get back is to do the same hike twice.

However, by using onward transportation it is easy to do the hike without having to backtrack. I took a minivan from Shkodra to Theth, hiked to Valbonë, and then took the minivan and ferry via Komani lake back to Shkodra. 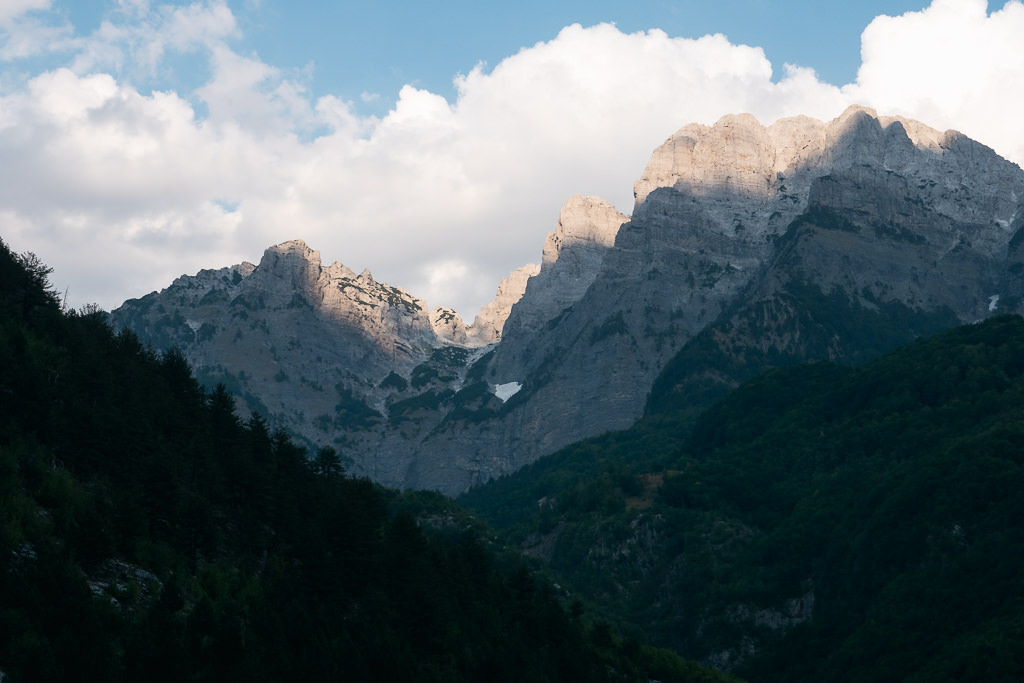 While planning my Albania trip I wondered how exactly to do this circular route, as it seemed to involve many steps. Then my hostel offered to book the minivans, the ferry (with flexible date ticket), and even recommended a great guesthouse in Theth, so I ultimately had to do no planning at all.

I left part of my travel gear at the hostel so that I could hike with just a light pack. Your hostel, guesthouse, or hotel in Shkodra may provide a similar service. 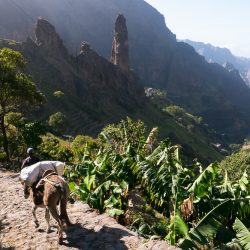 10 Underrated Destinations You Must Have On Your Travel List 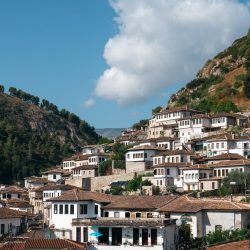 Albania Travel Guide: All The Places You Shouldn’t Miss