Why Micro 4/3 Cameras Are Amazing for Travel Photography

The Micro Four Thirds system is lighter and amazingly portable

If you’re looking for the best travel camera, chances are you’ve already gone deep down an infinite rabbit hole of specs, opinions, and technical jargon.

The truth is that when it comes to general photography most modern cameras are perfectly good tools and the differences are often somewhat subtle. But if you’re looking for a camera ideally suited to travel photography, I highly recommend looking at cameras using the Micro 4/3 format made by Panasonic and Olympus.

I switched to a Micro Four Thirds Panasonic camera a few years ago and it changed everything! Since then my girlfriend jumped into M43 as well, shooting mainly with an Olympus PEN. We’re both loving this format.

Let me explain why. 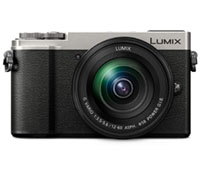 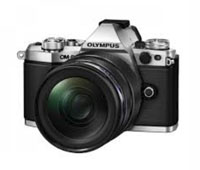 It’s all about weight

One thing I’ve realized from traveling for 8 years now is that packing weight is important. Bulky things I’ve increasingly left at home while the more portable gear has stayed with me over the years.

Weight is a factor that maybe has been forgotten a bit now that many people buy their gear online (which doesn’t let you get a real sense for size and weight), but I think it can make an enormous difference in practice. I love that MFT cameras manage to be amazingly portable while still giving you fantastic image quality. The low weight means I have no qualms carrying my camera with 4 lenses everywhere — and it’s easy to take all my gear on extended activities such as nature hikes.

So why are MFT cameras less heavy than others?

There are many technical aspects to cameras, but arguably the most consequential for a travel camera is sensor size.

Simply put, the sensor is the element inside the camera that converts light entering the lens into pixels in your image. A bigger sensor means your camera has more light-sensing dots. 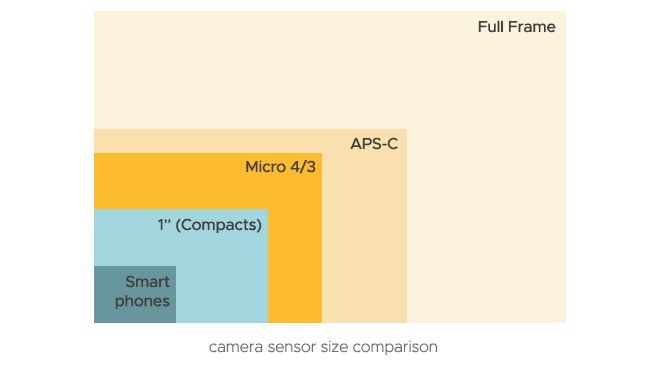 Smartphones and compact cameras have very small sensors, which limits the level of quality they can produce. Smartphone images are more likely to be grainy or poor quality in low light because of this. (Some tricks are used to still make images look better on phones, but if you’ve ever looked at your smartphone images on a laptop or PC, you’ll know what the real quality is like.)

Meanwhile, most top-of-the-line cameras have a full-frame sensor. This type of sensor is waaaay bigger. It enables such cameras to capture images with very high resolutions and in low light conditions, among other advantages. Popular examples of full-frame cameras include the Canon 5D or the Sony A7.

There’s just one problem: with a bigger sensor, you also need a bigger lens. And so full-frame cameras have massive and heavy lenses that are a real pain to carry around.

For example, a Canon 5D body already weighs 895 g (1.97 lb). A high-quality 24-70mm f2.8 lens will add to that another 950 g (2.09 lbs). Now you’re already lugging around 2 kilos. Carrying heavy gear like that around is going to slow you down and constantly restrict you on your travels.

That makes you wonder: what if there is some kind of middle ground between the small sensors and really big ones?

Why I love Micro Four Thirds

This low weight changes totally how I engage with my camera now.

I used to kind of hate bringing my old Canon gear along because it was just so heavy. I had three lenses for my previous system but almost always brought just one. And I would often leave my camera bag at my hotel because I couldn’t be bothered carrying it all the time, which made me miss many unexpected moments. 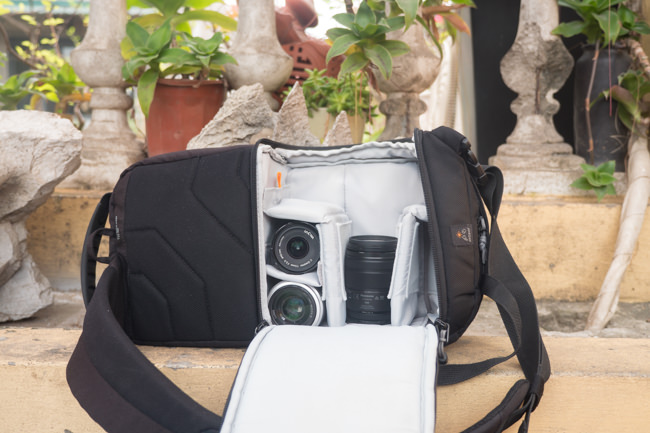 When I now travel with my Panasonic GX8 camera, it’s so light I hardly notice I have it with. I keep it in a sling backpack which gives me constant easy access to my camera. I’ve gone from carrying my camera about 20% of the time during my travels (e.g. only on the days I would visit a major tourist sight) to carrying it pretty much 80% of the time.

Even with multiple lenses in my bag, the total weight is still much lower than what I used to carry before.

Because travel photography can involve pretty much any kind of subject matter (people, landscapes, architecture, etc.) it’s amazing to be able to easily carry a full set of tools, rather than just one walkaround lens.

The most popular formats for cameras are full-frame and APS-C, whereas Micro Four Thirds is a bit more niche. That might give the appearance that it’s not as good as other formats, or that you’re not serious unless you have a $3,000+ Sony A7S.

As it turns out, many professional travel photographers use Micro Four Thirds cameras. For example, Mitchell Kanashkevich does truly stunning travel photography while using a Panasonic GX9. He recently made a video explaining why he favours this camera over his Sony A7.

James Popsys is another travel- and landscape photographer on YouTube who now swears by MFT cameras. He did a similar kind of video arguing why he likes to shoot with them. Again, it’s all about portability.

Former professional photographer David Thorpe even has a YouTube channel dedicated to MFT camera and lens reviews, which is an amazing resource when you’re trying to decide on which lenses to buy. He also did a side by side review of the Panasonic Lumix G9 (which is Micro 4/3) and the Panasonic Lumix S1 (which is full-frame), ultimately preferring the former.

I’m not saying that you should be swayed by a few photographers using a particular system. I’m just saying that despite not being one of the leading brands, there are many people happily using these smaller and lighter cameras.

All that said, there are two technical disadvantages to Micro Four Thirds.

Firstly, because the smaller sensor has fewer light-sensing dots, the image quality in low light can be lower than on an APS-C or full-frame camera. If you set the ISO to anything more than about 1600, you’ll start to see a lot of noise in low light photos. I’m usually very satisfied with the images I get in low light with 800 ISO on f 2.8 or lower, but if nighttime shooting is your main focus you would probably favor a larger-sensor camera. 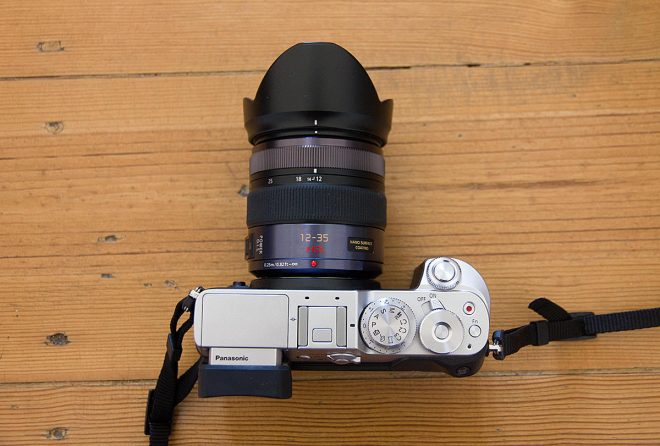 Secondly, it can be a bit more challenging to get shallow depth of field (i.e. blurry background) in your photos on Micro Four Thirds. This again relates to the sensor and the lens optics. On a full-frame camera, it is extremely easy to achieve shallow depth of field. On a Micro Four Thirds camera, it takes a bit more skill sometimes. You’ll either need to get further from your subject or use a lense with a low f-value.

Wide-angle with a shallow depth of field is more difficult to achieve with MFT, but things do get much easier with an f 1.4 or f 1.8 lenses. You can pick up a cheap prime lens for these types of shots.

Not the only option

Of course, there are many other cameras around.

Some do swear by the excellent low-light performance of a Sony A7. Others like alternative mirrorless cameras like the ones made by Fuji. If it’s not essential to have an interchangeable lens system, perhaps a fixed-lens premium compact like a Sony a6500+ would make more sense for you.

I can say though that Micro Four Thirds had been amazing for my travel photography. While I’ve used other APS-C and full-frame cameras, I don’t see much chance of me going back to these systems any time soon.

If you’re looking for a nice entry-level MFT camera, I quite recommend the Olympus PEN 8 (or the slightly improved PEN 9). It has easy auto and creative modes to get you started but also has most of the advanced features you’ll want to learn. I think the light metering and auto white balance on the PEN-8 is not always spot-on, but with some skill you can work around this. It lacks a viewfinder though this feature is available separately as an add-on.

If you’re looking for a professional-grade MFT camera, I think the Panasonic GX8 is amazing. The electronic viewfinder is crazy good, the metering and auto-focus are superb, and if you pair it with a good lens you’ll have some professional-level gear for your travel photography. 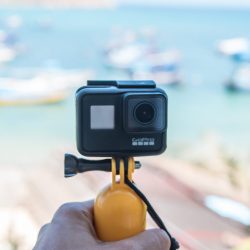 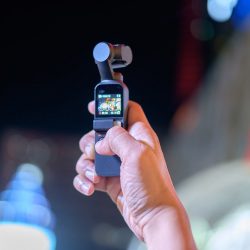