9 Fantastic Things To Do In Pokhara, Nepal 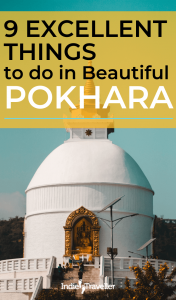 While Pokhara is Nepal‘s second-largest city it can be surprisingly peaceful and laidback, particularly in the Damside and Lakeside areas where nearly all tourists stay.

It makes for a great base for trekking the Annapurna region, but Pokhara itself also has a number of great attractions and things to do.

Here are a few things to do in Pokhara that I recommend.

Lake Phewa is a beautiful place, offering views of the hills surrounding Pokhara and, on a clear day, views of the distant Himalayan peaks as well.

Motorized boats are banned from the lake which means it’s always rather peaceful and quiet.

You can rent rowboats in a few different places, which you can row by yourself or you can hire someone to row for you. You can find a good boat rental company in Damside [location] and another one in Lakeside [location] closer to Tal Barahi Temple.

The Hindu temple of Tal Barahi, also known as the Lake Temple, is situated on a tiny island in lake Phewa. It is a hindu temple of the Goddess Durga (Barahi), the protector of gods, and used to worship by both Hindus and Buddhists.

It’s a calm place to relax during sunset. Smallboats ferry people to the island from the Lakeside shore.

For many visitors Pokhara is not just a destination by itself, but also a key launching point for multi-day treks into the Annapurna region. Countless tour operators in Pokhara can set you up with guides or porters, though it’s possible to do many treks independently as well.

The Annapurna Circuit trek is probably the most famous, though keep in mind it can take at least two weeks. If you don’t have the time or inclination for such a long trek, two popular shorter treks include the Ghorepani Poon Hill Trek (4 days) or the Annapurna Base Camp Trek (7 or 8 days), both leaving from Pokhara.

I wrote previously about how to do the Annapurna Sanctuary trek.

Enjoy the views at Sarangkot

Perhaps not everyone will want to trek for days on end, though fortunately there are also some viewing points around Pokhara that take just a few hours to reach.

Sarangkot is a village on the hills just above Pokhara, and it’s famed for its panoramic views of the Himalayan mountains.

Most people go here for the views at dawn or dusk. During the day, Sarangkot is also a popular launching point for paragliders…

Paragliding in Pokhara is a real joy as you’ll be able to lift off from Sarangkot, glide down along the hillside forests, slide accross Lake Phewa, and then land near the buffalo-strewn swamplands on the opposite side of the lake.

As of 2017 the prices for paragliding are standardized at international levels of $80 USD for a tandem flight.

Okay, I’m fully aware this is not a typically local thing to do. But if you’ve been travelling for a while, or just having a rainy day, you might see the appeal of this open-air cinema in Pokhara.

A small path leads through various backyards on to the Movie Garden [location], where a few guys have set up an open air projection screen along with some comfy chairs, nice cocktails, and a panoramic backdrop of Phewa Lake.

Go out in Pokhara

Pokhara is not exactly known for its nightlife, mainly due to a 11pm bar curfew, but that doesn’t mean that there aren’t a bunch of decent bars around.

When I visited Pokhara in 2017, the most happening place seemed to be the Busy Bee Cafe, which at night is not a cafe but definitely a bar. You could easily miss it as its entrance is a bit tucked away [location]. There’s a small dance floor and it gets busy even on weekdays.

A more laidback alternative is Silk Road [location] which has a pool table, often live music, and a garden with a warm and welcoming atmosphere.

Mahendra Cave just north of the city may not be the biggest and best cave in Asia, but what does make it notable is the thousands of fruit bats living inside. It takes just a short taxi or scooter ride to get to the caves, where you are guaranteed to see the little fellas hanging from the ceiling. Keep in mind, this is not for the claustrophobic…

Hike to the World Peace Pagoda

Perched atop the southern lakeside hill, the World Peace Pagoda (also known as the Shanti Stupa) is a Buddhist monument to peace, offering stunning mountain and lake views.

There are a few different ways of getting there. The quickest way is to cross the lake by boat from any of the Lakeside docks, then making a steep but short 15 min hike up the hill. Alternatively, you can walk to Dam Side and find a trail just past it, which is about 2km long and approaches the pagoda through the forest. If you’re lucky, you might find some wild monkeys on the way there.

What’s the vibe in Pokhara?

If you enjoy being in a place where the pace is slow (at least, along the lake) and where the views are beautiful, you’ll be in the right place. But as often with travel destinations, much depends on what time in the year you visit! I was in Pokhara in low season (late May / early June) when it had a beautiful calm atmosphere.

I’ve been told that in the high season it can get busier and more stressful. While I’ve only been to Pokhara once, I’ve seen the difference the season can make in other places, so if you’re going in the busiest time of year remember your experience may be slightly different from what travel guides tell you.

Expats told me of how Pokhara is rapidly expanding as well as experiencing a recent tourism boom mainly from China. Nevertheless, Pokhara is a far quieter place than Kathmandu and a great place to be based for a while.

How to do the Annapurna Sanctuary (ABC) Trek Without a Guide