Off the typical travel trail, an unusual settlement with possibly the prettiest sunsets in Portugal 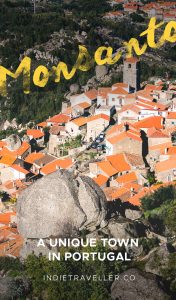 Monsanto (Idanha-a-Nova) is a unique Medieval village in Portugal where many of the houses are sandwiched between, or even under, giant granite boulders.

When I stumbled upon Monsanto, I felt like I’d found a very special little place — and I now rate it as one of my top places to visit in Portugal.

Besides its extraordinary rock houses, its mountaintop location also gives spectacular views of the surrounding valleys filled with higgledy-piggledy farmlands with olive trees and little stone walls. Further up the mountain are some impressive ruins of a Templar Knights castle.

Located about a 3-hour drive from Lisbon and near the border of Spain, it is a bit out of the way to feature in the usual Portugal itineraries. But even though it took a while to get to, I thought it was definitely worth the trip. 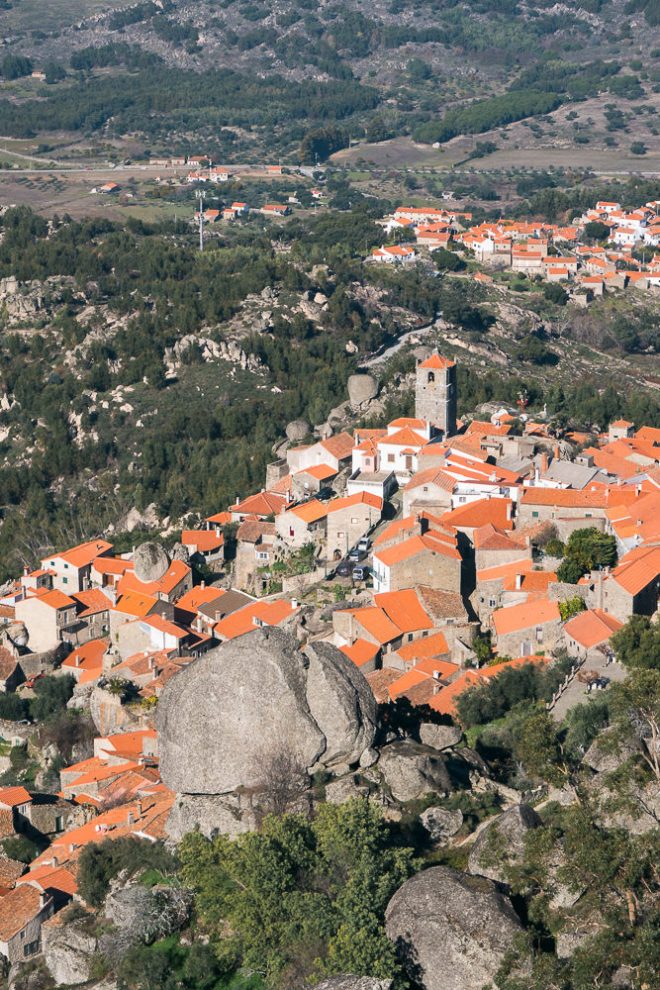 Close to the border with Spain and overlooking valleys all around it, Monsanto clearly occupies a historically strategic location. But establishing a settlement on its mountaintop location meant it had to be built on some difficult terrain.

The 758m high mountain is strewn with massive granite boulders. But the village simply adapted to this obstacle-filled landscape by integrating the boulders into its layout and structures. Many of the houses are built between, on top of, or under the boulders. 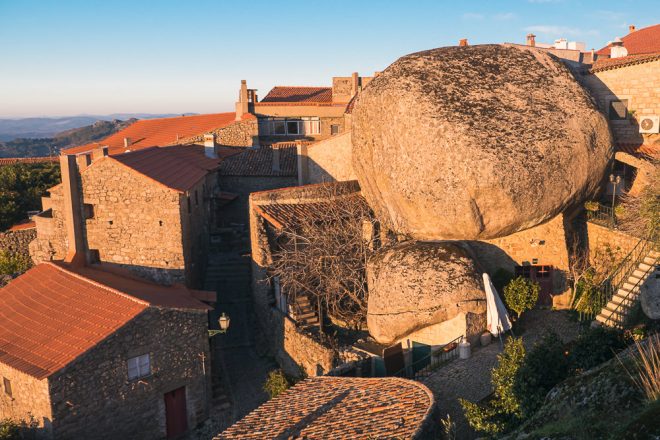 These almost cave-like houses really spoke to my imagination. As I wandered through the cobbled streets of Monsanto, I felt like I had arrived in a fantasy location from a video game like Skyrim, imagining the rock dwellings being home to blacksmiths or alchemists.

Of course, we don’t need such fantasy to appreciate this ancient town, which is built on a site once occupied by the Romans, invaded by the Visigoths, and conquered by the Moors, before being placed under the protection of Templar Knights. 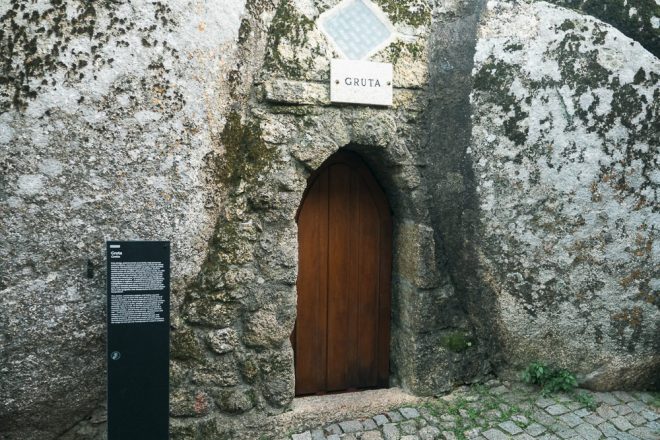 I had timed my arrival to Monsanto well, approaching it just as the sun was coming down. The last sun rays illuminated many of the roofs in a bright orangey glow, while the alleyways were already shrouded in shadows. 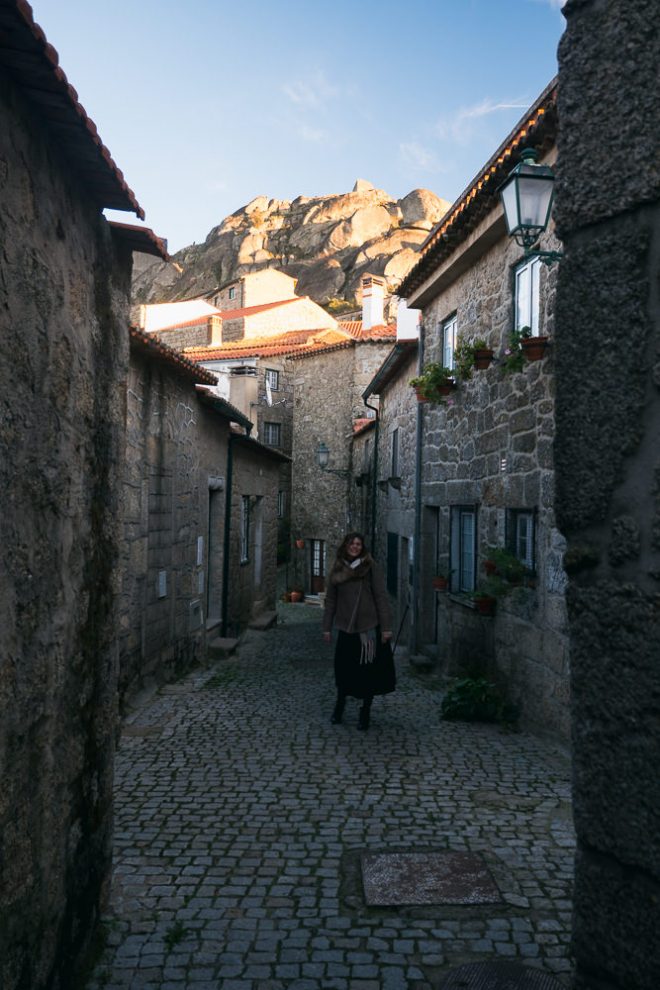 What may have added to the mystical feel was being here in winter. There was hardly anyone else visiting during this time; it was entirely quiet save for the wind and some distant goat bells.

It’s worth being in Monsanto at sunset, as it’s quite the magical moment. Looking out to the valley below, bathed in the day’s last sunrays, I felt completely at peace. 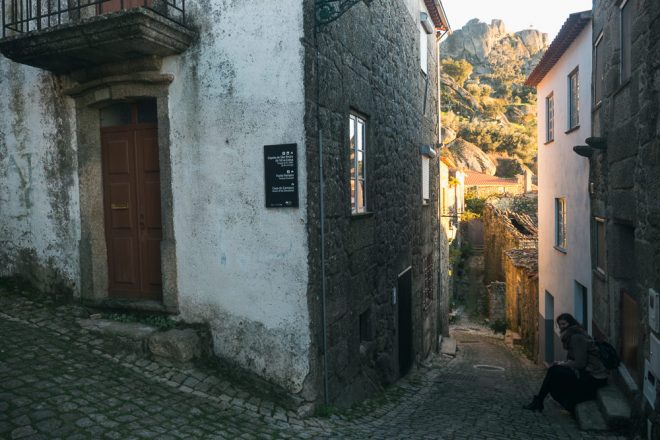 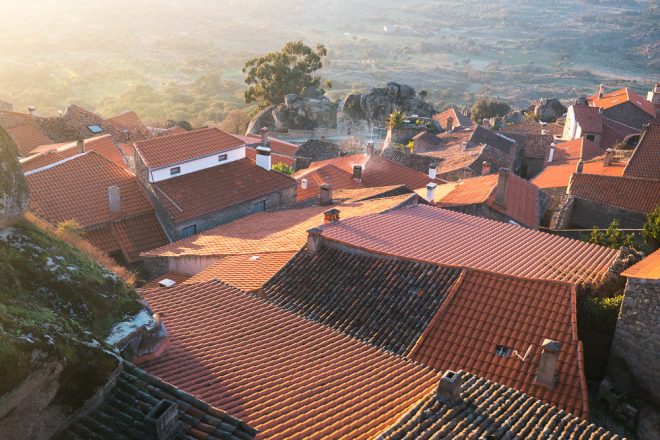 Since Monsanto is known for its rock houses, I felt determined to stay the night in one such house. Luckily, I had found a nice B&B that had a cozy living room with a lovely fireplace — and, like many of the stone houses in Monsanto, it also had several boulders clipping right through the walls. 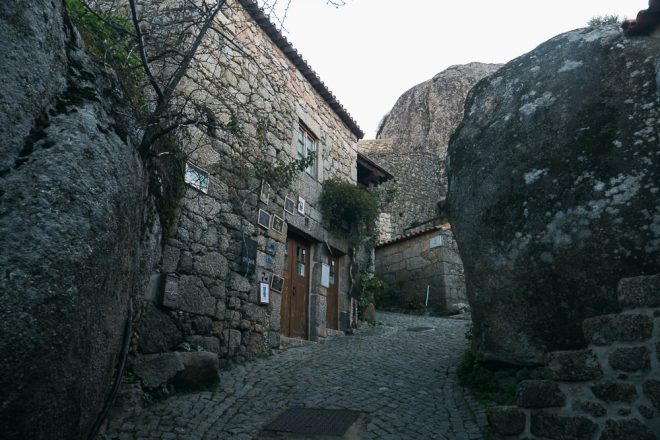 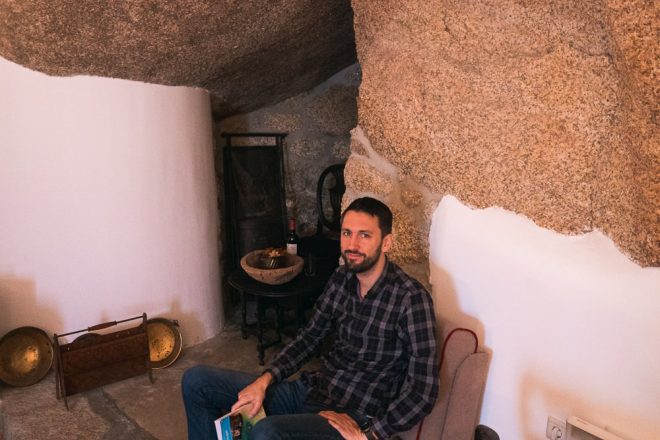 What to see and do

There isn’t strictly a huge list of things to do in Monsanto, except to stroll around and check out the different churches, chapels, and viewing points. Of course, the town is so wonderful that walking around it is plenty rewarding in itself. You can also follow some small hiking trails in the area.

I stopped by the Taverna Lusitana, a tavern selling Portuguese food and mead, which really helped to underscore the Medieval atmosphere. The tavern has a small ladder taking you up to a balcony terrace — it is, of course, on top of a big granite boulder. 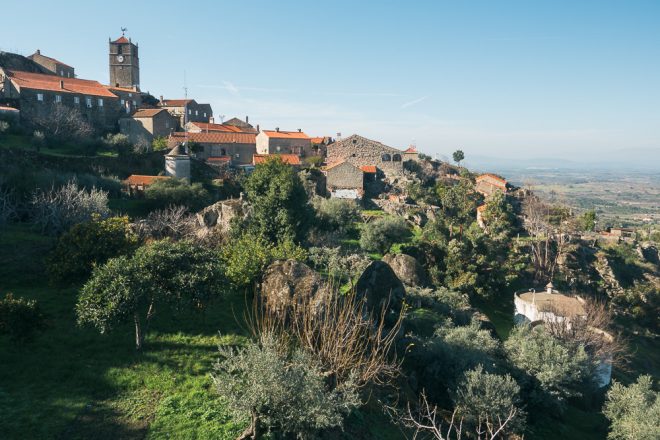 Monsanto is an ancient settlement, having had a presence during the times of the Lusitanians, the Romans, and the Moors, before the Order of Knights Templar established a base here in the 12th century following the Reconquista. You can easily visit the still reasonably intact Templar castle, which is on the opposite end of the mountain. 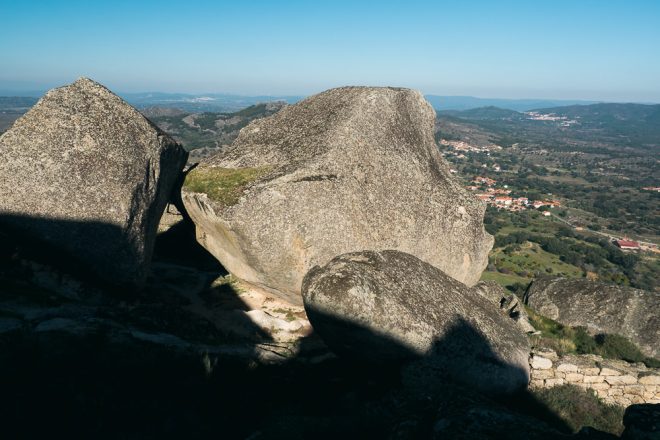 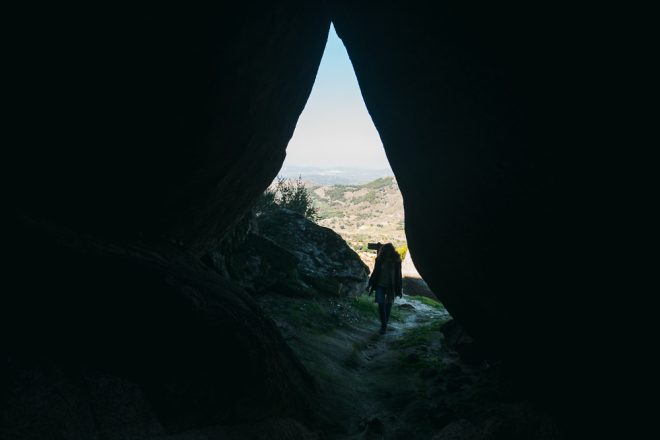 A walking trail snakes its way past many boulders up to the highest point, where the Castle of Monsanto still has many intact walls and towers. However, parts of the castle were destroyed in 1815 due to an explosion of a magazine powder keg. 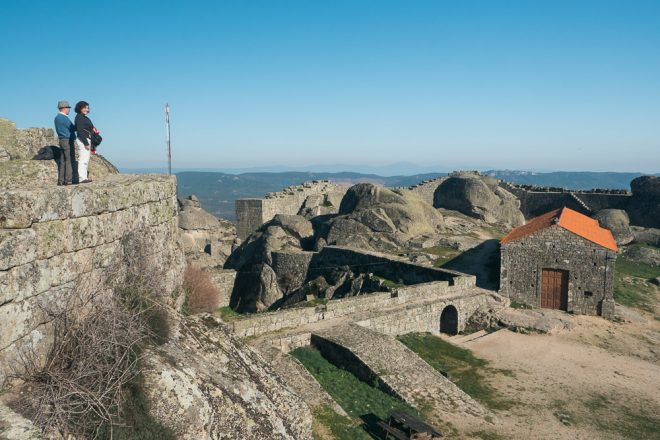 The views from the castle are even more spectacular than from the village itself, so it’s highly worth the hike there and back. The walk to the castle should take about 20 to 30 minutes one-way. 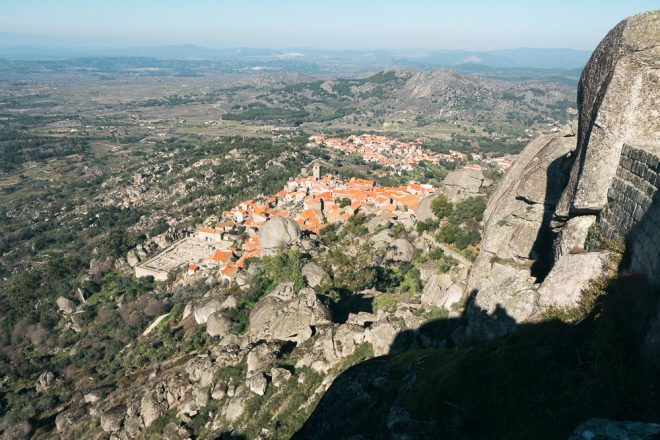 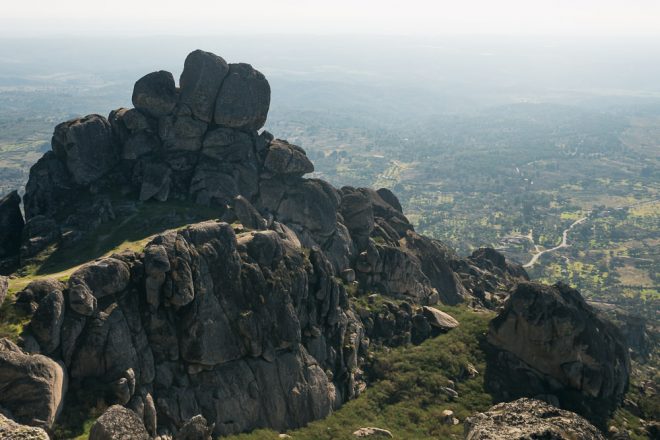 Other things near Monsanto

Monsanto is a quiet and rural place, so it’s perfect if you wish to escape to a little sanctuary for a while. But there are also a few things to do in the surrounding area, so you could easily stay a couple of nights while doing trips nearby. 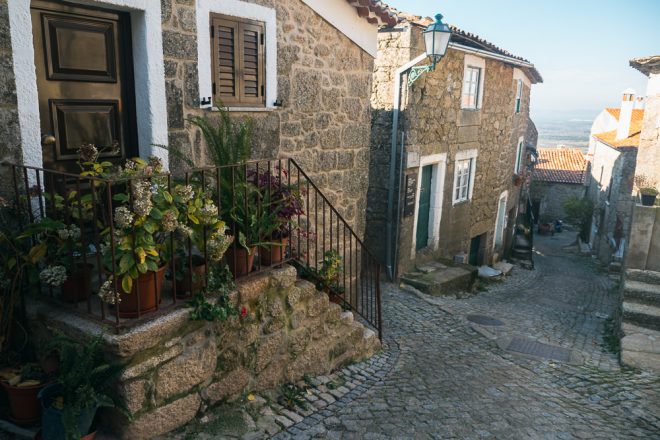 Just a 15-minute drive away is the town of Penha Garcia. Besides being totally cute and scenic, there are several other reasons to visit.

For starters, it has another interesting castle to climb, once built by the second king of Portugal.

Secondly, within some of the 490 million-year-old quartzite rocks in the area were found ancient fossils of trilobites and snake-like creatures. You can see the imprints after a short hike. The town cafe called Frágua also has various informative signs about these prehistoric sea animals.

Finally, there is a gorge with several old mills with a walking trail running alongside it.

The rest of Beira Baixa province is also much worth walking, cycling, or driving through, as its landscapes have maintained a very quaint character. Further afield you can take a road trip to the Serra de Estrela national park, home to mainland Portugal’s highest peak.

A network of historical villages is promoted within the wider area, which includes Monsanto as well as other cute villages like Sortelha and Belmonte. 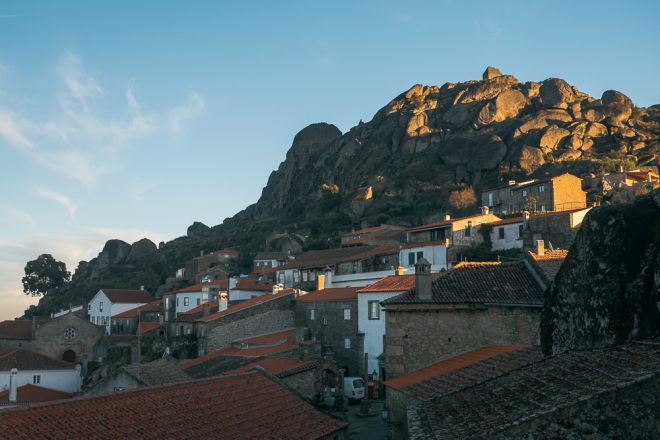 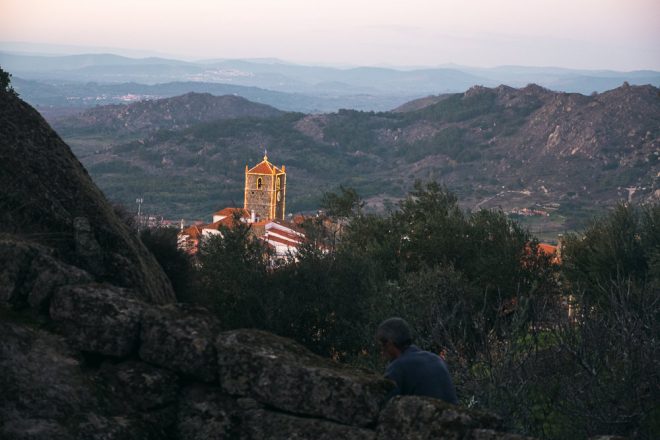 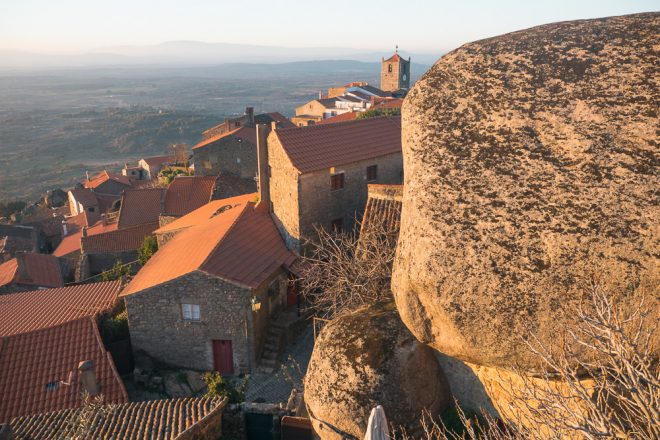 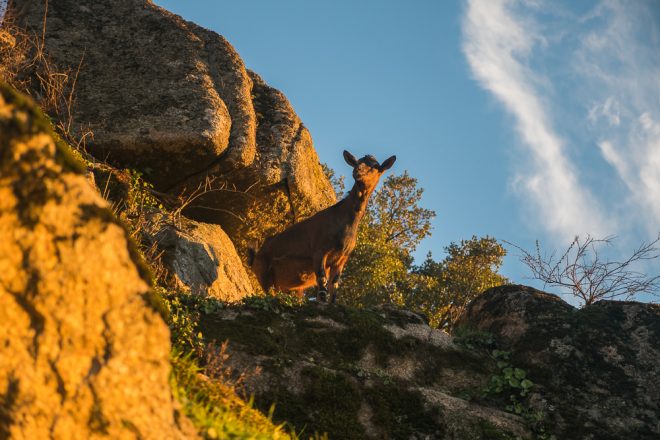 How to get to Monsanto

It’s by far the easiest to get to Monsanto by car. I did so myself as part of a road trip in Portugal.

To get there by public transportation is highly challenging. The closest you can get by direct bus from Lisbon, Porto, or Coimbra is to the city of Castelo Branco. From there, you would either have to take a taxi (1 hour) to Monsanto, or catch the once-a-day bus to Monsanto. It leaves Castelo Branco at 5.15pm and only on weekdays. 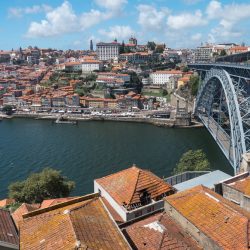 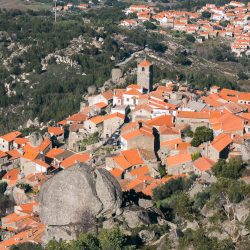