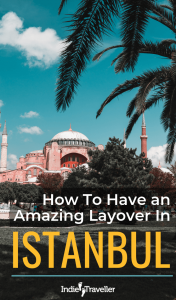 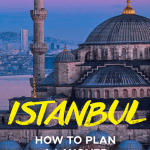 When booking my flights for a trip to Tbilisi, Georgia, I noticed a special promotion on the Turkish Airlines website. While I initially had no plans to have a layover in Istanbul, that quickly changed when I saw the airlines’ special offers for stopovers.

Lured by the promise of a free hotel — so long as I stayed in Istanbul for at least 20 hours — I turned what would have been a 5-hour transfer at Istanbul’s airport into a 36-hour layover. 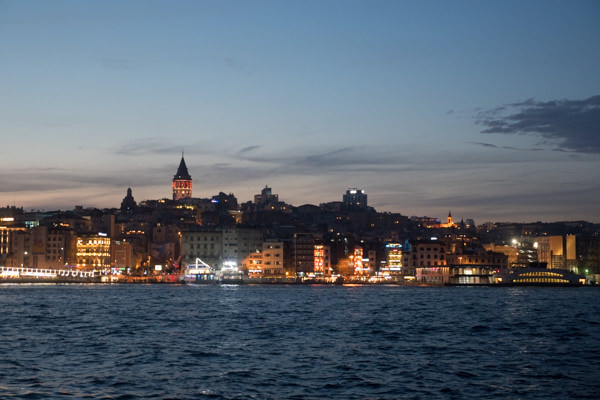 I jumped at the chance to revisit Turkey, having last done so over 15 years ago. My trip back then trip had been with college friends to a cheap all-inclusive resort holiday to the southern Turkish coast, during which I honestly saw rather little of Turkey. But I always knew there were more reasons to love Turkey than just some boozy fun in the sun, so I was keen to see it again, this time with different eyes.

On my brief albeit exciting layover in Istanbul, I was able to soak up much more of the culture and local vibe. It made for a great mini-stay en route to my final destination.

How to get a free hotel in Istanbul

Similar to other stopover deals offered by countries like Iceland or Portugal, Turkish Airlines will offer you a free hotel if you connect via Istanbul and decide to stay in the city. This offer is open to any economy or business class customers.

Turkish Airlines is a great airline that I’ve enjoyed flying with several times before. They operate a very well-connected hub out of Istanbul that links between Europe, Africa, Central Asia, and beyond.

Often you can get great cheap flights with Turkish Airlines, at least if you’re okay with making a transfer in Istanbul. I once flew from London to Bangkok with them for just £360. That was a very lucky find, though now I always check with Turkish Airlines whenever I’m heading east.

To qualify for the free accommodation, you need to stay in Istanbul for at least 20 hours. To do this, you must deliberately add a stopover to your flight itinerary.

You can do this by using the multi-stop flight search on the Turkish Airlines website. Enter both legs of your flight itinerary separately, and then add an extra day in between the two flights. 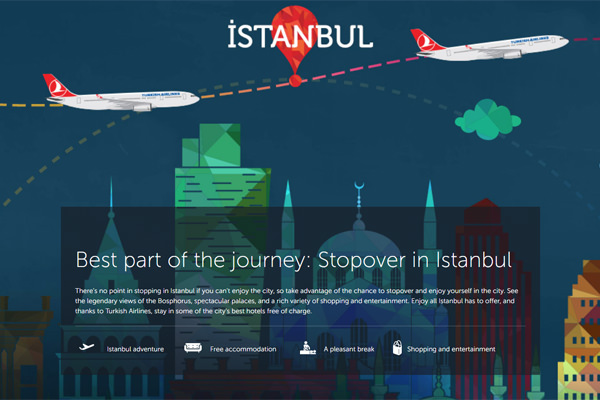 The airline website has details for how to request the hotel voucher.

I was given a choice of four hotels. The fanciest on offer for me seemed to be the Clarion Golden Horn: its standard rooms normally go for 120 EUR a night. I was tempted but the hotel was well out of town, so I went with a smaller hotel in the historical center, the Orka Royal. 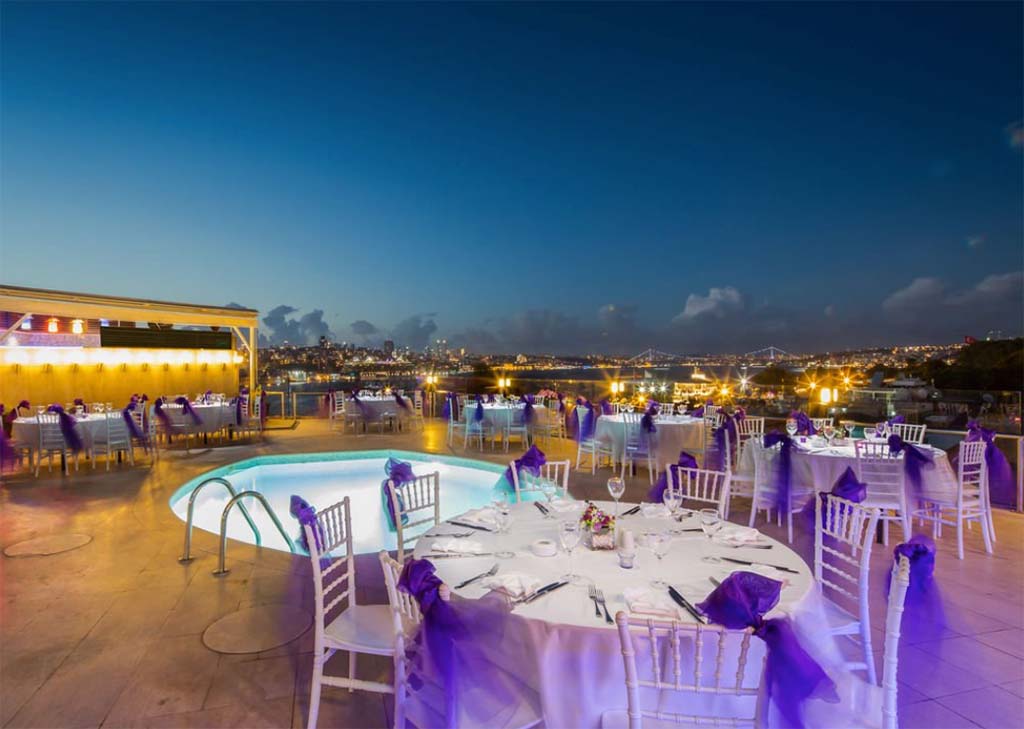 Was it worth the trouble? Eh, maybe.

I must confess I’m not a fan of a certain type of hotel, as I’m a bit of an adventure traveler and I enjoy a traveler atmosphere.

On my second night, I switched to staying in a 10 EUR a night hostel. It may not have had AC, a rooftop pool or a gym, but it did have extremely amicable staff and a fun atmosphere. It had a chilled-out bar where I listened to stories from some guys who’d hitchhiked to Istanbul from Ukraine. My kind of jam.

That said, the free hotel wasn’t bad, and if I had been on a business or family trip, I’d have probably liked it even more.

Besides, I’m Dutch, and we’re known around the world for being cheap — so I’m easily persuaded by a freebie! The free hotel is clearly intended to promote Turkey as a tourist hub, and the promotion had certainly worked on me.

Things to do on an Istanbul layover

I’m happy to say that my Istanbul layover was fantastic! It’s a city highly worth checking out even on just a brief visit.

I’d hate to use such a cliché, but Istanbul truly felt to me like East meets West. Located right at the fault line between two geographical and cultural spheres, some aspects reminded me utterly of Asia while others are totally European. It’s a fascinating place with a deep history, serving as the capital of the Byzantine Empire and once a key city in the Ottoman Empire as well.

Even if you have limited time, there is a lot to see and experience.

See the city from a rooftop

Arriving at night, I immediately left the hotel to wander along the Bosphorus riverside promenade, then dove into some neighborhoods in the historical center. 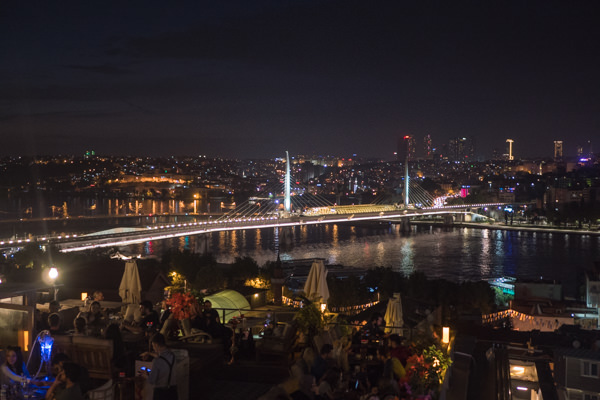 I came upon an alley covered in colored umbrellas which led up to some stairs to a cluster of rooftop bars. I sat myself down on one of the roofs of the Bab-ı Âli Kahvesi cafe [map].

From here, you can have some brilliant views of the Bosphorus and the Suleymaniye Mosque behind you. The bars around here are all quite local and English menus seemed to be a rarity, but it shouldn’t be too much of a challenge; with a little improvisation you can easily order something delicious. (Hint: any sort of grilled meat they do very well in this country.) 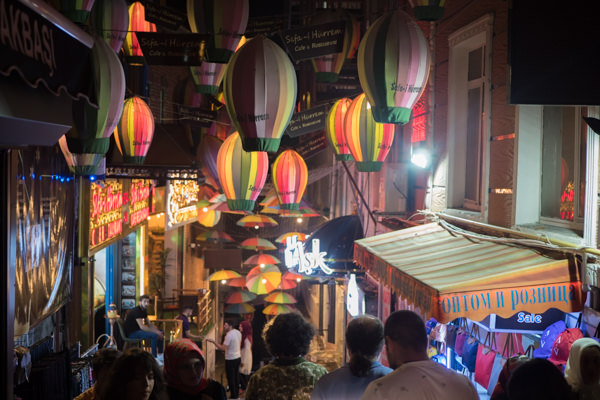 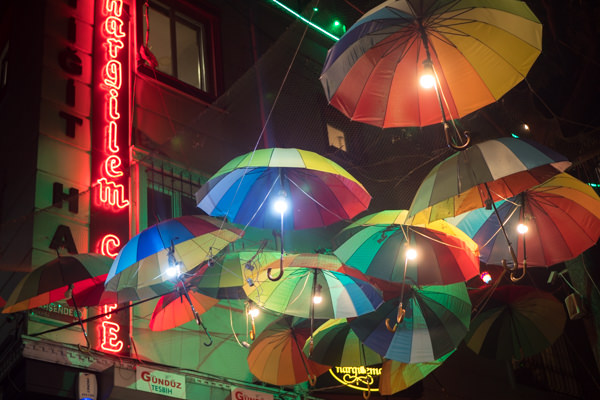 The Hagia Sophia served both as a cathedral and a mosque throughout the ages, going back as far as the times of the Byzantine Empire. For nearly a thousand years, the Hagia Sophia was in fact the largest cathedral in the entire world. 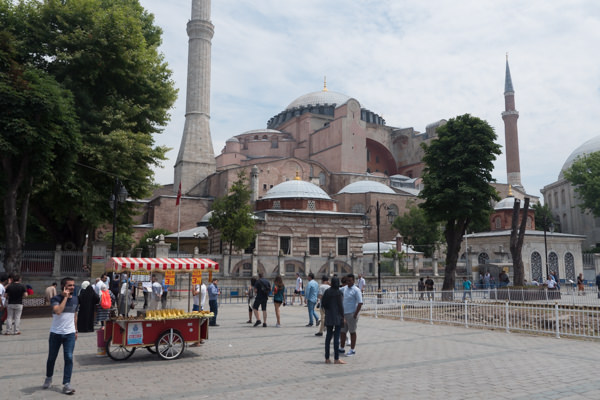 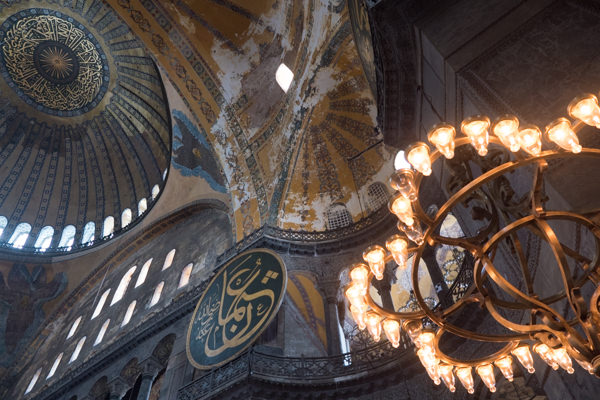 Once you step inside, it’s immediately clear that it was meant surely not just to inspire faith in God but surely also to show off the power of whichever empire held it at the time.

It’s a bit of an obligatory stop in Istanbul, so I figured I should tick this off first thing in the morning. The structure is hugely impressive in its own right, though is even better appreciated when touring it with a knowledgeable guide. 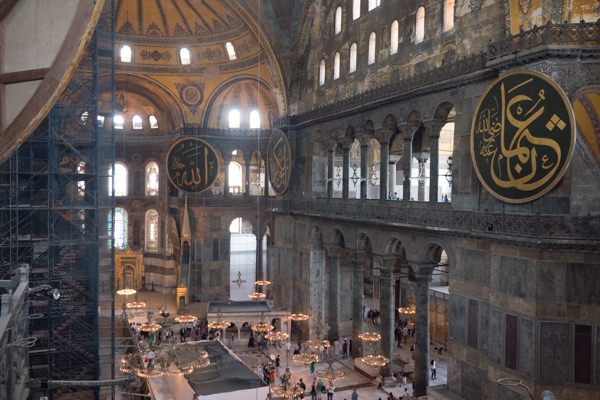 This ancient underground reservoir and filtration system once provided water to the Great Palace of Constantinople and other nearby buildings. It’s a (literally) cool and mysterious place, featuring several Medusa head columns and other interesting details. I loved going down the stairs into this little underground world and instantly transporting myself to Roman times. 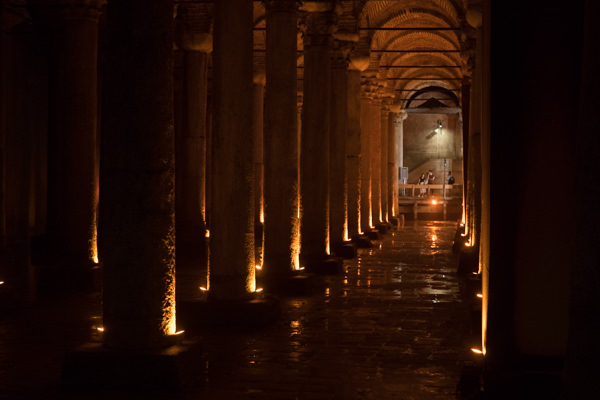 As you may know, Istanbul was once known as Constantinople and served as the capital of the Byzantine Empire (which was the eastern half of the Roman Empire when it split into two). The city is known sometimes as the “second Rome”, and you can definitely see this history here and in other locations around the old city.

Fun fact: the cistern featured prominently in the film Inferno based on the Dan Brown novel.

Having covered some of the ancient city and strolled through its parks, by mid-day I felt compelled to cross the Bosphorus river to the other side. I followed the Galata Bridge which, somewhat oddly, encompasses numerous restaurants on its lower level. I then stumbled upon Karaköy [map], a riverside neighborhood filled with funky cafes, ateliers, street art, and little alleys covered with vine roofs. 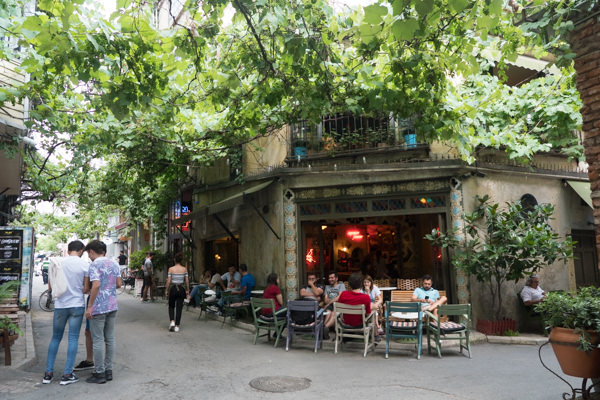 It’s a very browsey part of town and a perfect place to sit down for a nice brunch or lunch, maybe having some fine Turkish tea or shisha, and just watching the world go by. It’s a trendy area where you can catch some local atmosphere.

One of my tried-and-tested ways to explore a city is simply to walk towards whatever next landmark I can see off in the distance. I spotted a Romanesque-style tower on top of a hill and decided it should be my next waypoint. 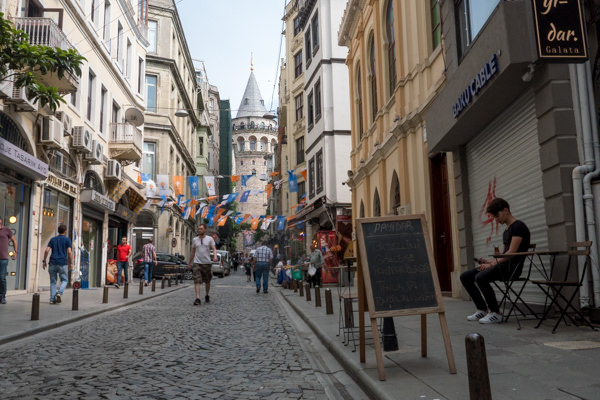 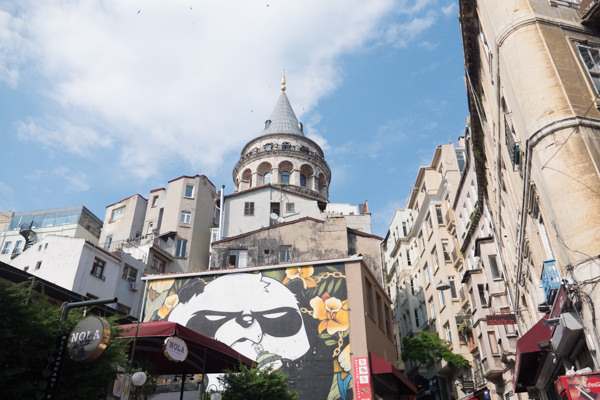 It turned out to be Galata Tower. A quick search informed me this was in fact built by the Genoans in the 14th century. The republic of Genoa (the northwestern bit of Italy) was once a trading nation that rivaled Venice in its reach and influence, and they built numerous trading posts and colonies around the Mediterranean and Black Sea. Galata Tower was the centerpiece of their Constantinople colony.

There was a huge queue to go up the tower which I wasn’t too motivated to join. Luckily, I spotted a nice rooftop terrace inside the Anemon Galata Hotel [map], from where I could get panoramic views of the tower as well as the Bosphorus river below.

While exploring the neighborhood around Galata Tower, I observed a wonderful and proud Istanbul tradition. Many people will put out plates with food and bowls with water on the streets there for any thirsty or hungry cat. 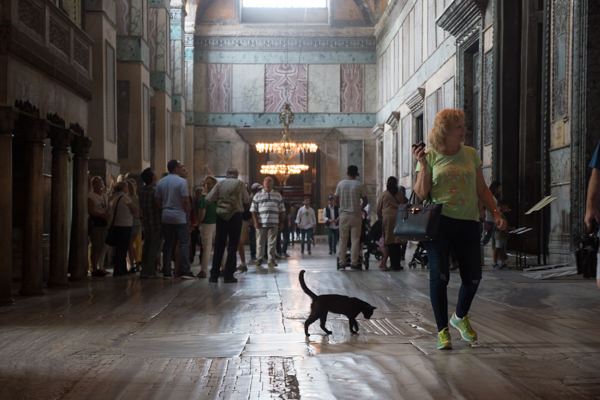 The felines are highly regarded within the local culture, considered by many to be guardians of the city and the one-time defenders from rat-borne plagues. Another blogger wrote a wonderful story on the history of Istanbul’s relation with cats that is highly worth a read.

As evening approached, I rounded off a day of sightseeing with a visit to the Grand Bazaar, which is one of the oldest covered markets and often regarded as one of the first shopping malls of the world. 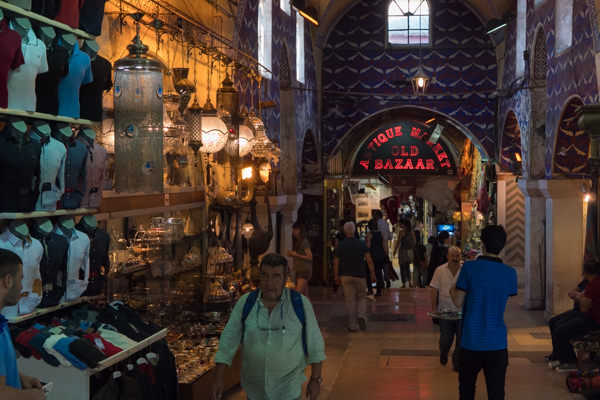 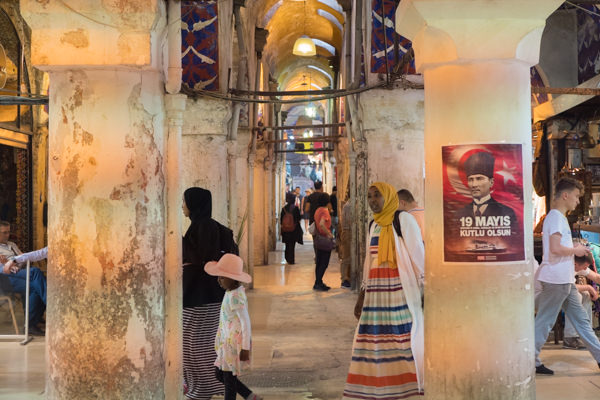 The Bazaar once sat at a key node on the Silk Road. To this day it’s filled with lantern shops, gold jewellers, and silk clothing stores.

Even if you’re not intent on buying, it’s very fun to stroll around. I was relieved to find that the sellers here are in no way pushy or annoying (much unlike in Turkey’s coastal resorts or, say, in the souks of Morocco).

Still, you may wish to read this article on how to bargain like a pro at the Grand Bazaar. 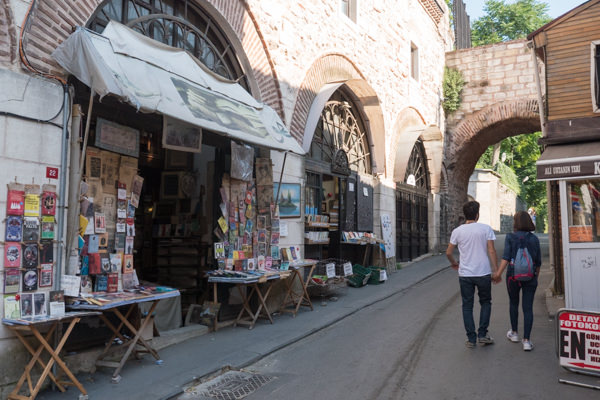 At the end of the day, my feet were definitely tired from all that walking and I was craving a cold beer on a roof terrace. That said, the historical parts of Istanbul are extremely walkable and you can pack a ton of sightseeing into a mere 24 hours.

While I normally like to stay somewhere longer to get to know it inside out, I felt my layover in Istanbul was entirely worthwhile. With its long history at the heart of multiple empires, Istanbul offers a wealth of historic and religious places to take in, and I highly enjoyed the welcoming atmosphere on the streets of Istanbul. Despite just a short stopover in this city, it reminded me to come back and spend more time in Turkey again. 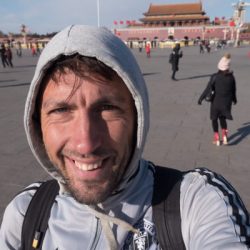 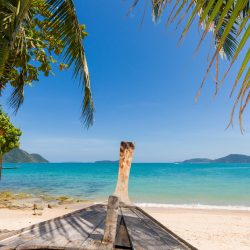 23 Amazingly Cheap Places You Should Travel To In 2023