10 Of The Best Hikes In The Canary Islands

The Canary Islands often get pigeonholed as a beach resort destination, but this volcanic archipelago is also a hiker’s paradise!

I spent nearly two months island-hopping the Canaries, spending most of my time discovering its many trails. While I missed the chance to visit some islands — I’ll be back for you, El Hierro! — I got to sample much of what the Canaries have to offer walkers.

If you’re specifically planning a hiking holiday, I can recommend the islands of La Palma and La Gomera, as they have less development and a lot of varied trails. That said, it’s clear there are great hikes all over the Canaries.

To inspire you, here are some of the best hikes I’ve done, along with links to more details. 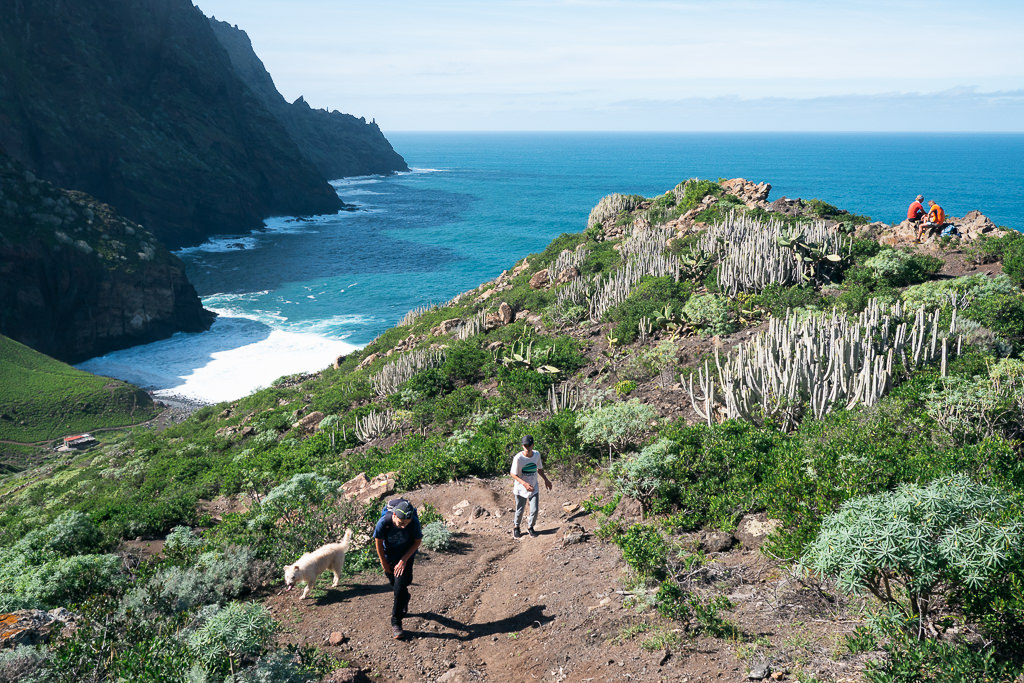 Tenerife is not often tipped just for its hiking, it actually offers some truly spectacular hikes. The trail from Taganana to Playa de Tamadite, following one of the island’s wildest coasts, is surely among the best of them.

You’ll find this trail in the Anaga Mountains, a green and dramatic landscape that’s distinctly different from the arid south where most tourism on Tenerife is concentrated. Don’t miss exploring this more distant corner of Tenerife, as it’s so different as to be virtually another island. 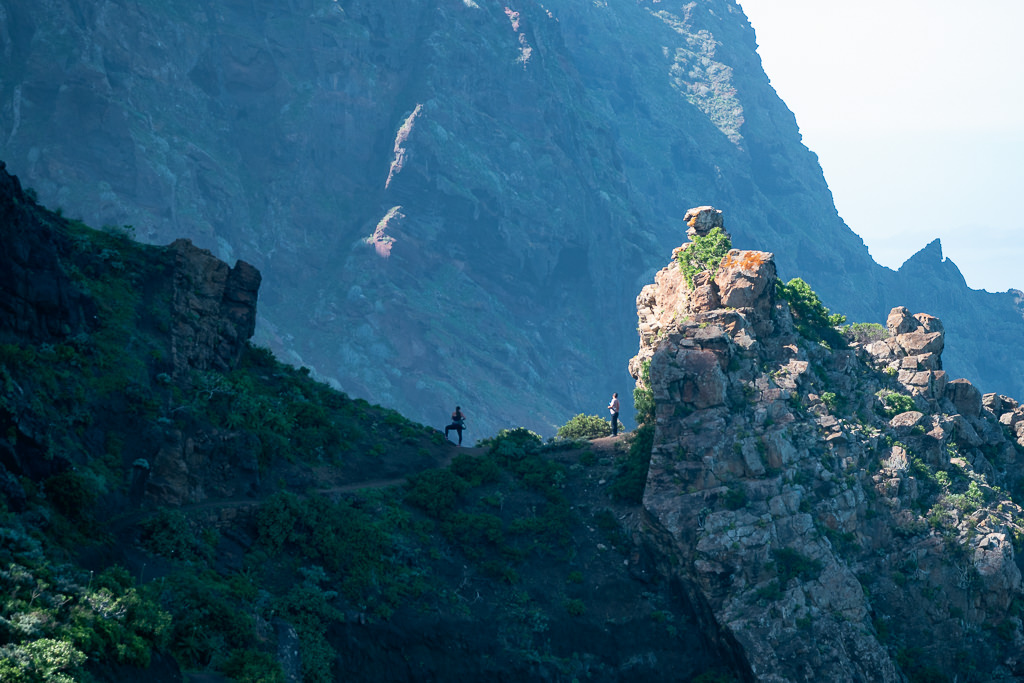 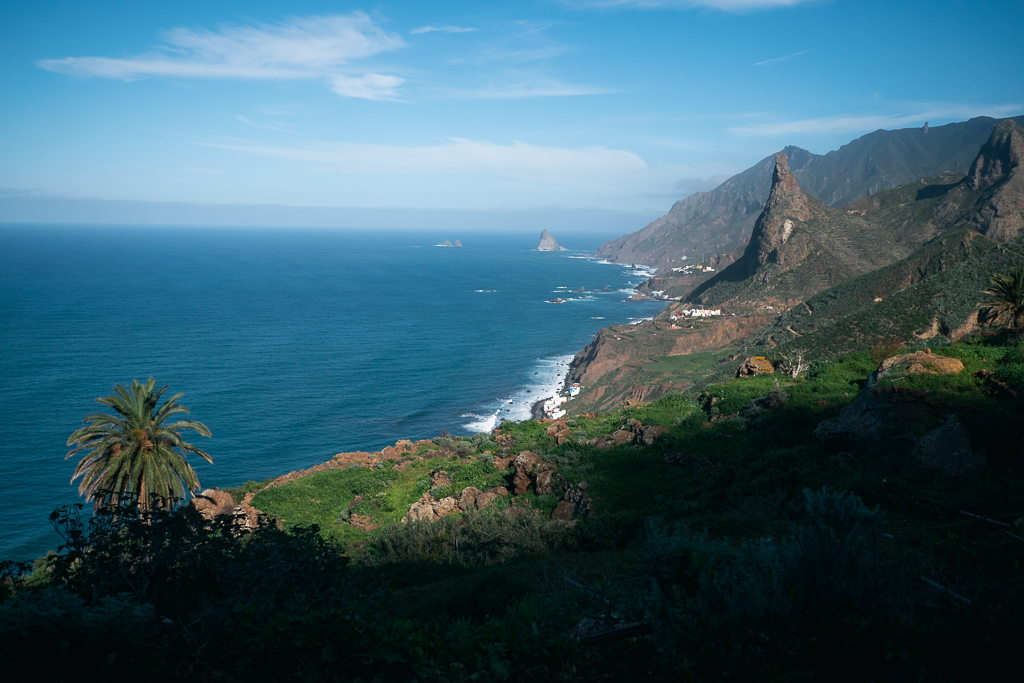 This particular hike starts in the remote historical town of Taganana, then runs along the coastline, until you reach the wild rocky beach of Playa de Tamadite. The cliffs and rocks protruding from the ocean make for some captivating vistas, forming a permanent backdrop as you traverse the windy coastal path.

The four-hour hike (two hours there, two hours back) is definitely not to miss if you’re in Tenerife. 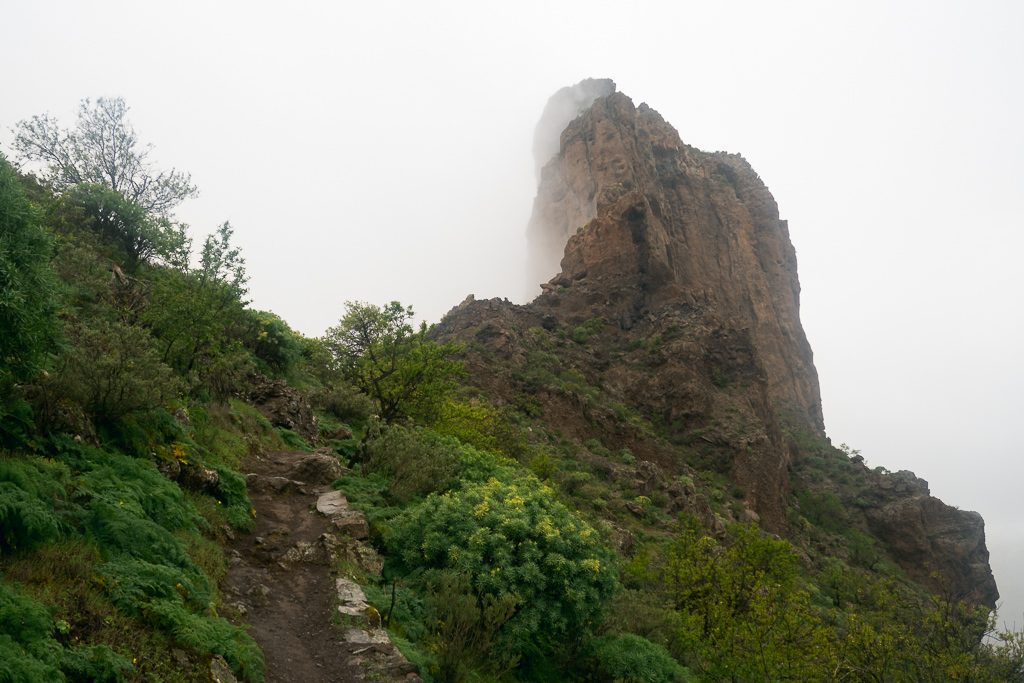 The roque nublo is a key landmark on Gran Canaria, its peak visible at the very center of the island.

While Nublo is already eye-catching, I did not realize its sacred significance until I visited the small museum at the base of the peak. There it is explained how it was once a place of worship for the island’s indigenous inhabitants. It was also at this rock that the final battle against the Spanish invaders was fought. 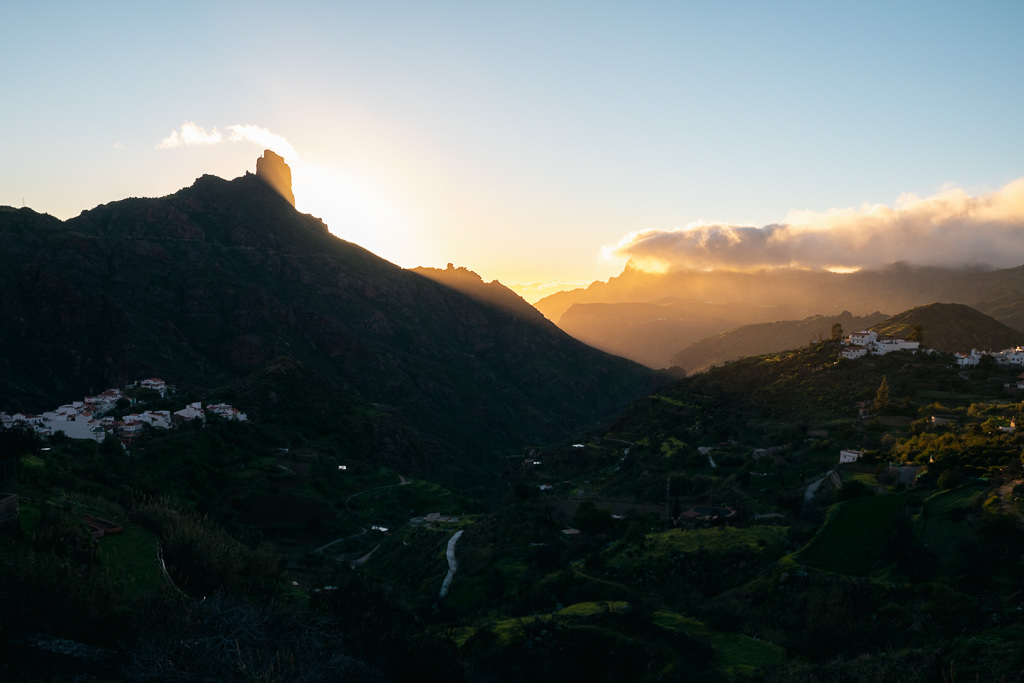 The mountain town of Tejeda makes for an ideal starting point for a hike. A circular hike can take you from Tejeda to the town of La Caluta, on to Roque Nublo and back again. At the local tourism office, you can get a flyer for this hike, which is marked ‘Ruta 2’. The full hike takes between 4 and 6 hours. A number of alternative side-routes are also indicated.

It’s not just an amazing hike with constant great views, but the rock has become somewhat of a symbol of Gran Canaria, so it’s the perfect first hike to do if you’re visiting this island. 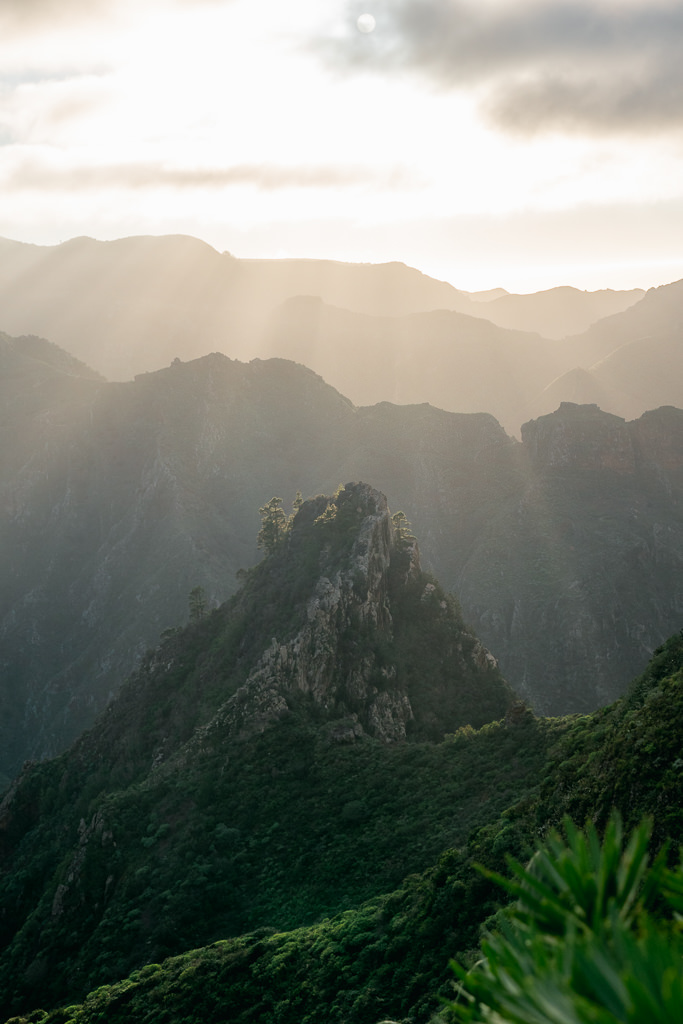 The remote town of Chinamada on Tenerife is notable for its 30 or so cave houses, built into the rocks among panoramic vistas of the Anaga Mountains. The town is also where you’ll find the trailheads for several hikes, such as the hike down to Punta del Hidalgo on the coast. This hike takes about 2,5 hours, though it can be lengthened by starting at Cruz del Carmen, deeper in the Anaga park. 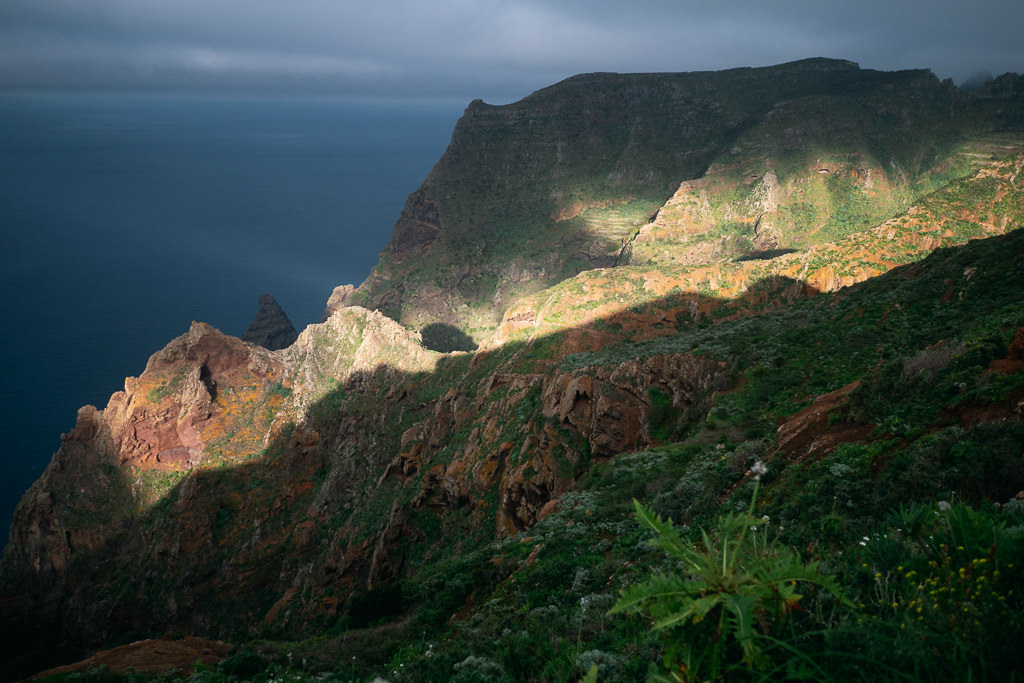 Catching some early morning light or sunset from Chinamada can be a magical experience, as the surrounding peaks are silhouetted by the sun’s rays. It’s easily one of the best walking areas on the Canaries. 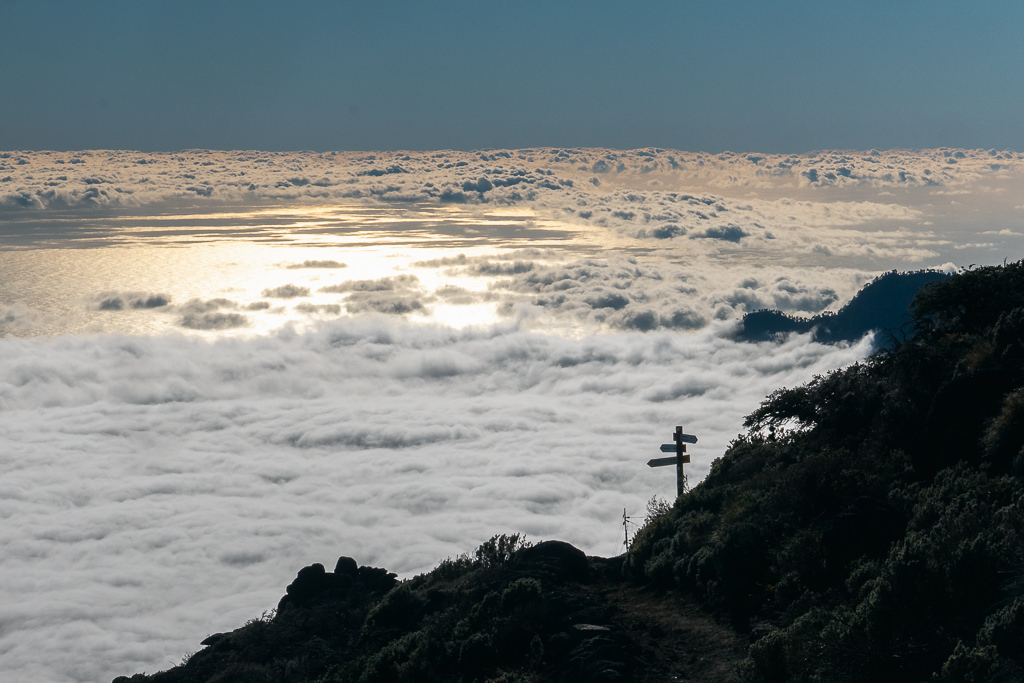 La Palma is known as one of the best of the Canary Islands for hiking, with more top-rated hikes than most visitors would be able to cover in one trip. I hiked as much as I could during my stay on La Palma and found the Pico de la Nieve mountain peak one of the most spectacular spots that I visited. 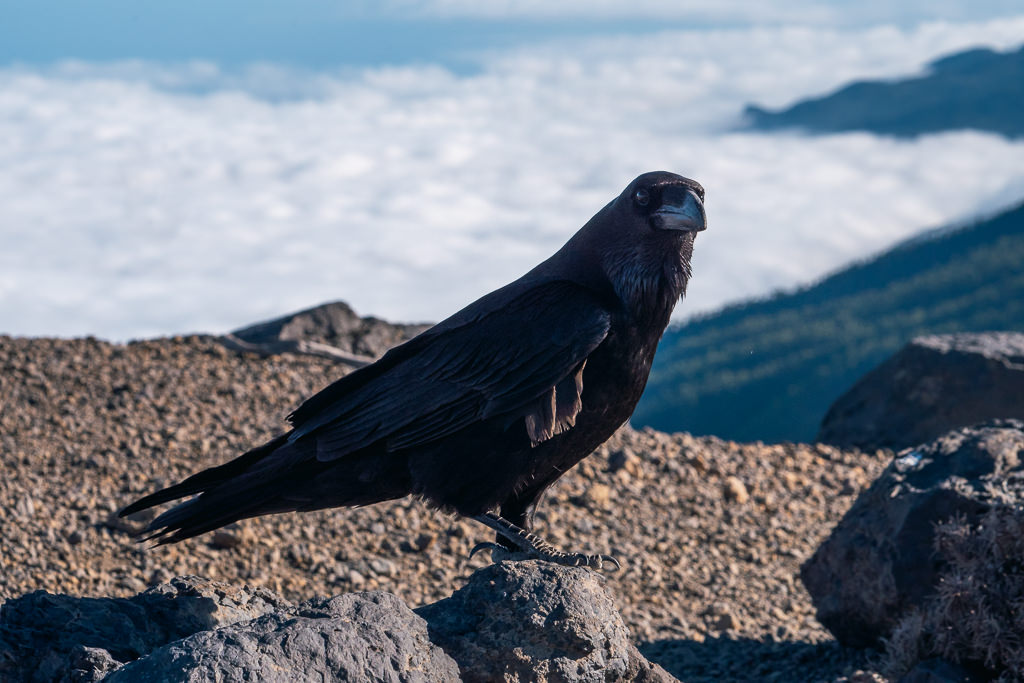 This 90-minute or so linear hike (look for trail PR LP3) takes you through pine forests to a mountaintop viewpoint above the clouds. The views above the tree line are simply spellbinding, letting you survey the entire eastern half of the island, as well as the peaks of the Muchachos, from where a series of giant telescopes study the universe.

There is a cross at the peak where quite a few endangered Canarian ravens like to hang out. They sometimes follow hikers intently, but they are fortunately quite friendly. 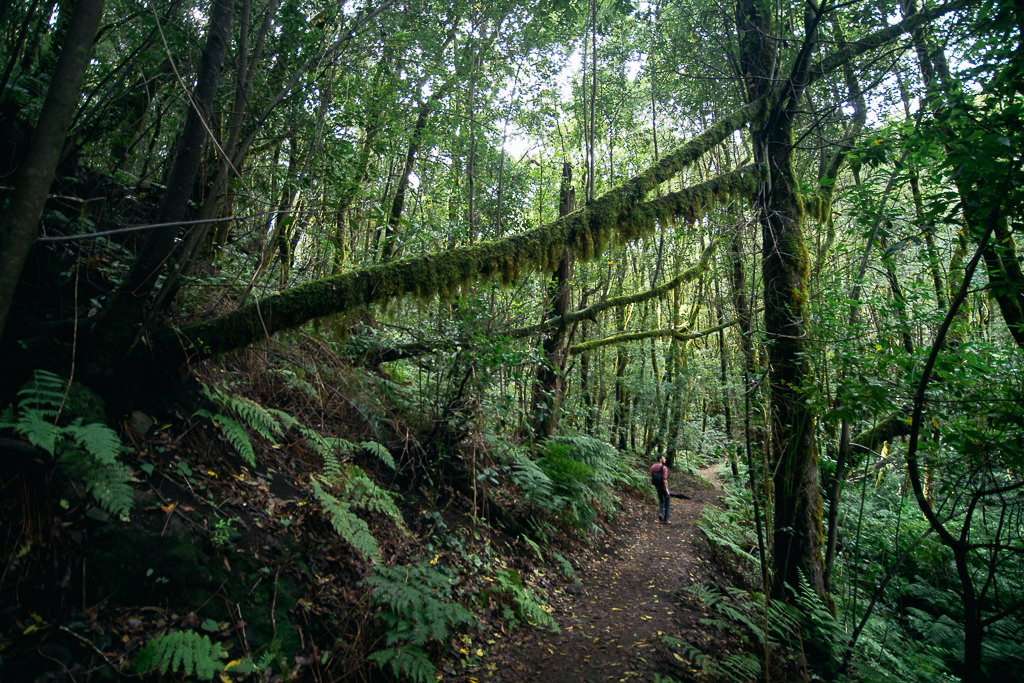 The bite-size island of La Gomera is situated just opposite of southern Tenerife. The entire island has been declared a Biosphere Reserve and lacks any form of mass tourism, so if you are a keen hiker then this is a fantastic island to visit.

At the heart of La Gomera lies the Garajonay National Park, which is home to some spectacularly verdurous cloud forests. Since clouds get trapped besides La Gomera’s central peak, it makes this area especially humid, giving life to lush fairytale-like forests that are totally covered with moss, ferns, and lianas. 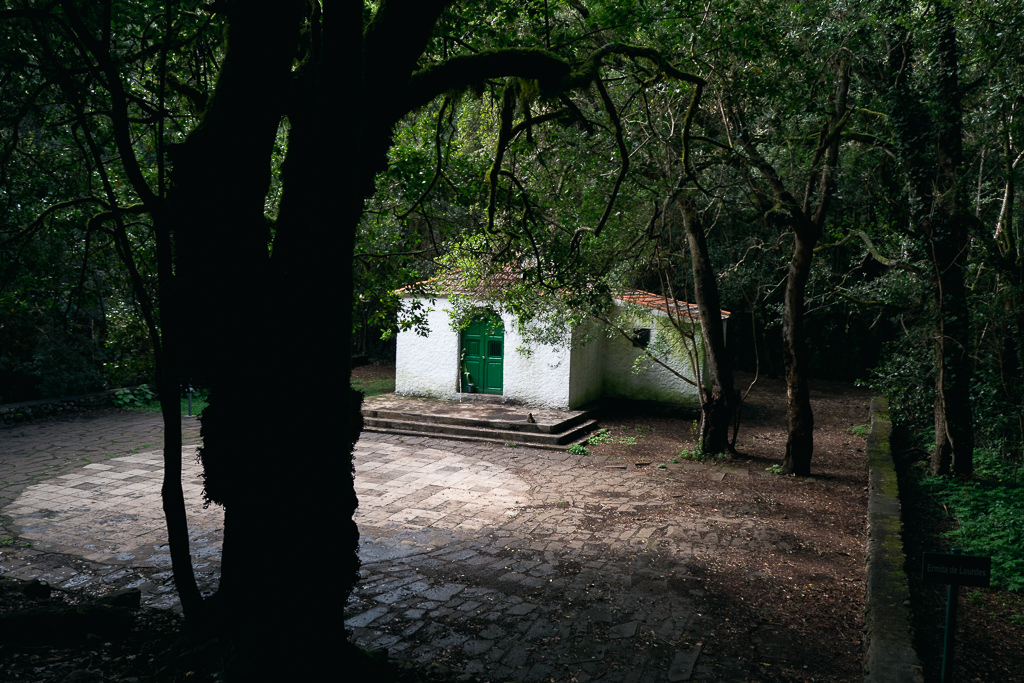 The hamlet of El Cedro provides the best access to a number of wonderful hikes through the cloud forests. Among them is a beautiful 2-hour walk that will take you to the Chapel of Our Lady of Lourdes and back. 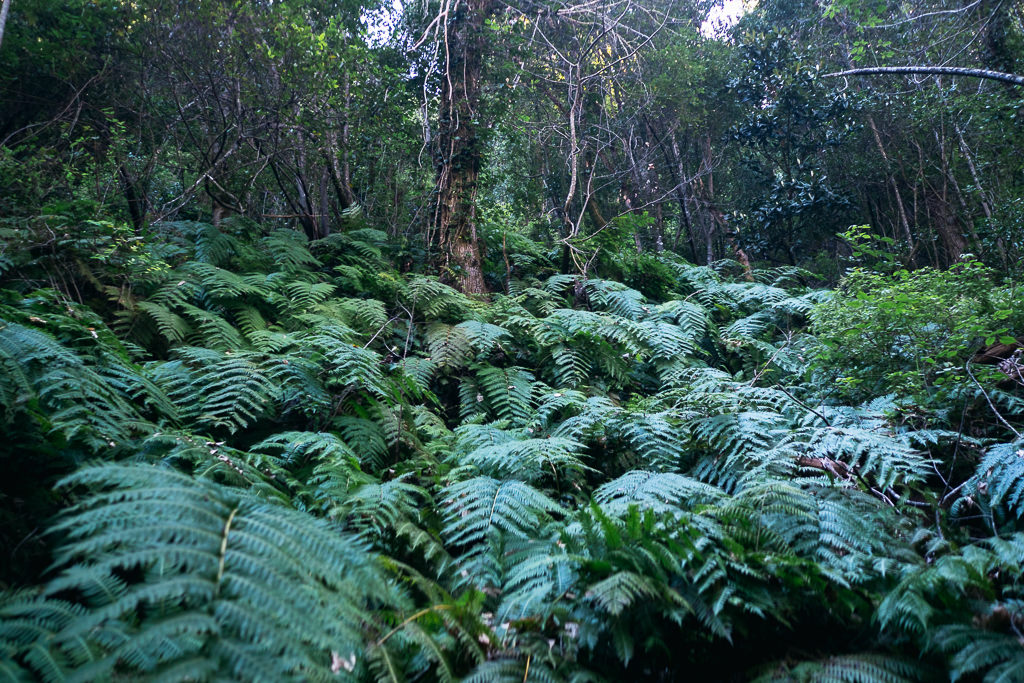 Much like the Garajonay National Park on La Gomera, the island of La Palma also has its share of lush jungle-like forests, particularly in its northeastern corner around Los Tilos.

The forests of Los Tilos are so wondrous that they provided a fantasy setting for the Netflix show The Witcher, many parts of which were shot on the Canary Islands. 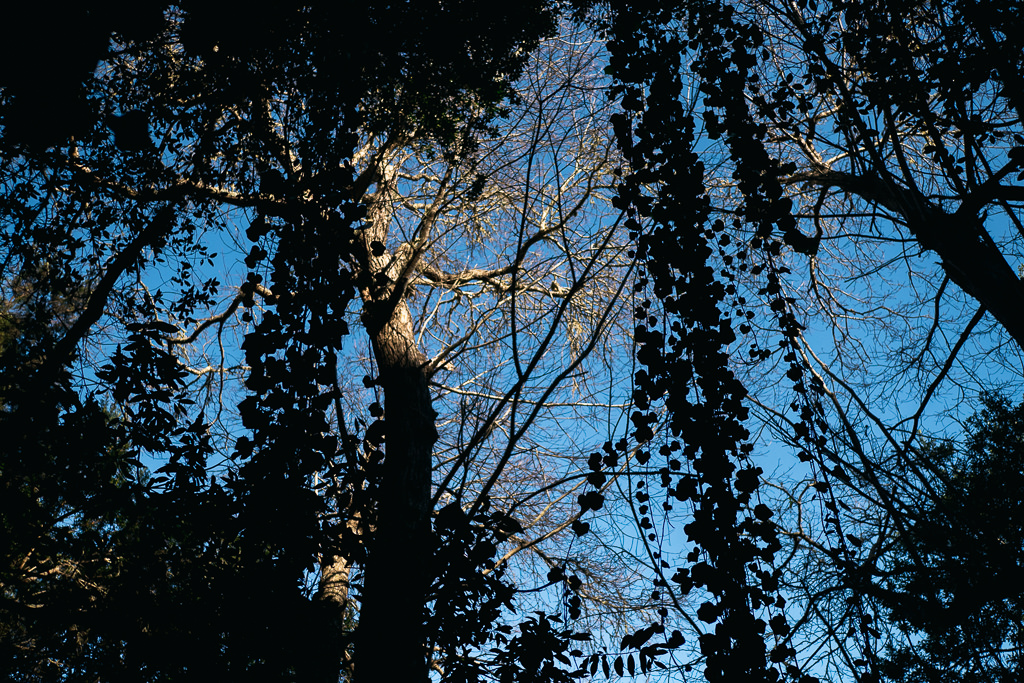 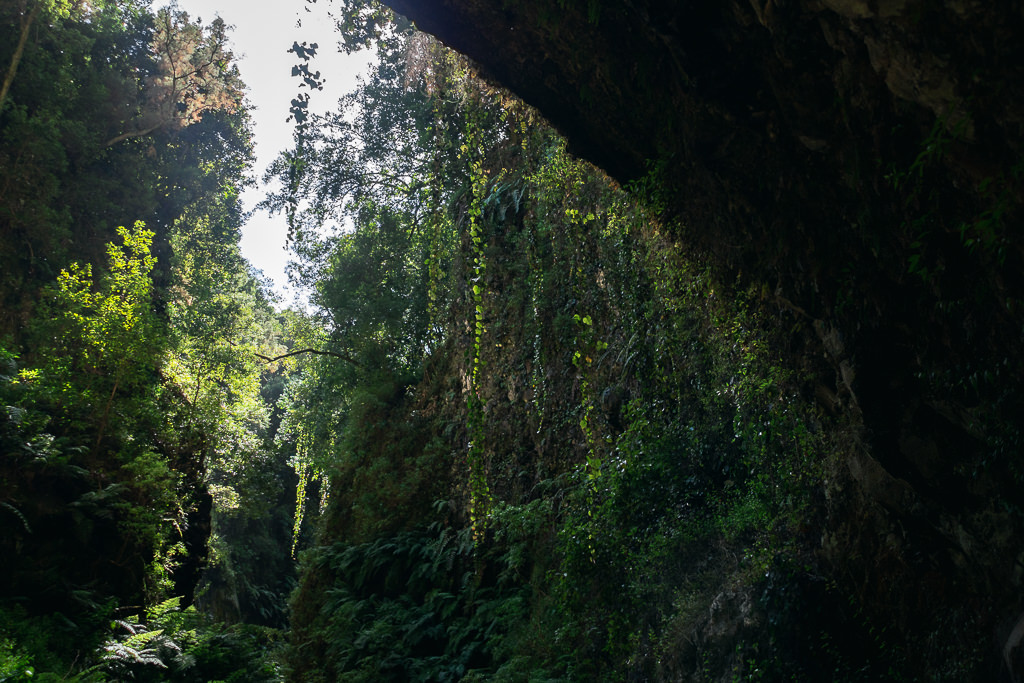 Many hikers come to see the waterfall of Los Tilos, though sadly I visited during the dry season when it was all but a trickle. Luckily, the dry period provides a different opportunity, namely to hike through the dry river canyon (a bit of an unofficial path), clambering around the rocks and past some cool-looking overhanging cliffs.

Whatever time of year you visit, Los Tilos is a not-to-miss hiking area on La Palma. 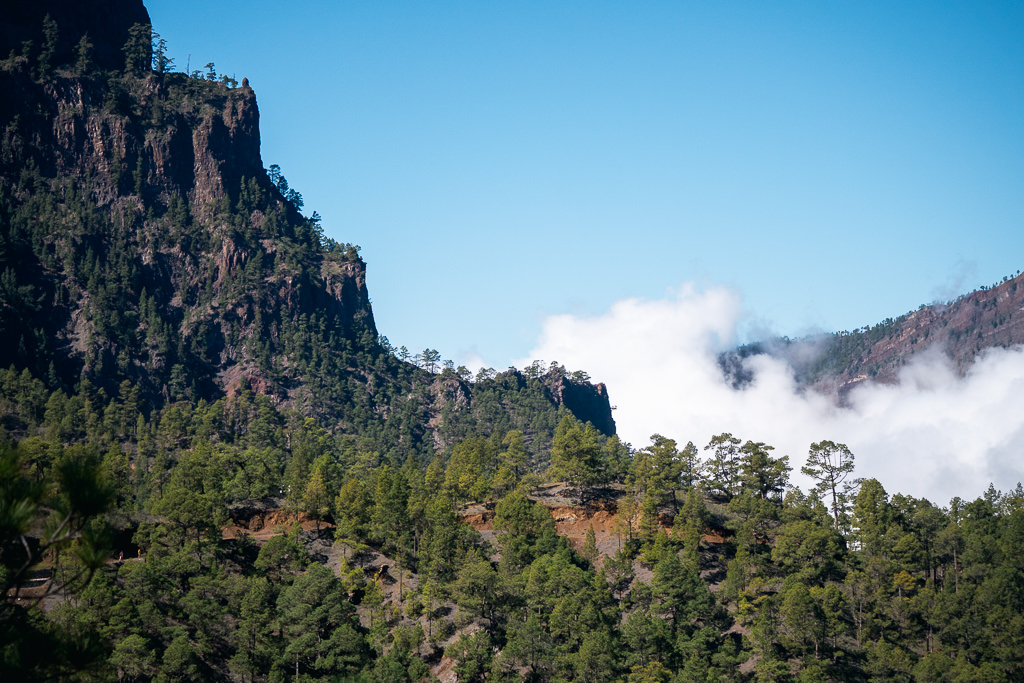 It’s often said that La Palma offers some of the best hiking on the Canaries, so in that spirit, let me mention another excellent hike on this island.

At the center of La Palma is a huge volcanic crater called the Caldera de Taburiente. There are several ways to walk in- or around it, ranging from the very hardcore, to a casual stroll. 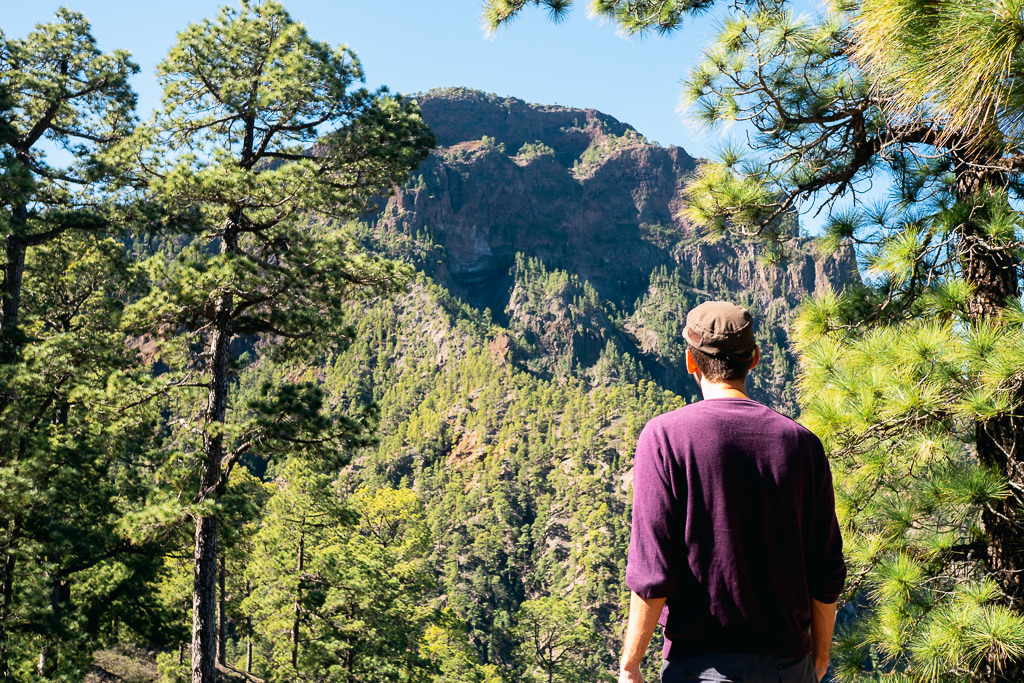 If you’re a hiking or trekking fiend, you may want to consider the arduous PR LP13 hike, which goes up to one of the mountains and then down into the crater, before circling back. The whole hike takes nine hours, though if you take a morning taxi up to the Mirador de Los Brecitos, you can cut this down to a more manageable six hours.

Sometimes the trail is closed after bad weather, in which case the Mirador de la Cumbrecita makes for a great alternative. This lookout point on the edge of the crater will give you a good look inside, as well as a casual one- to two-hour trail. 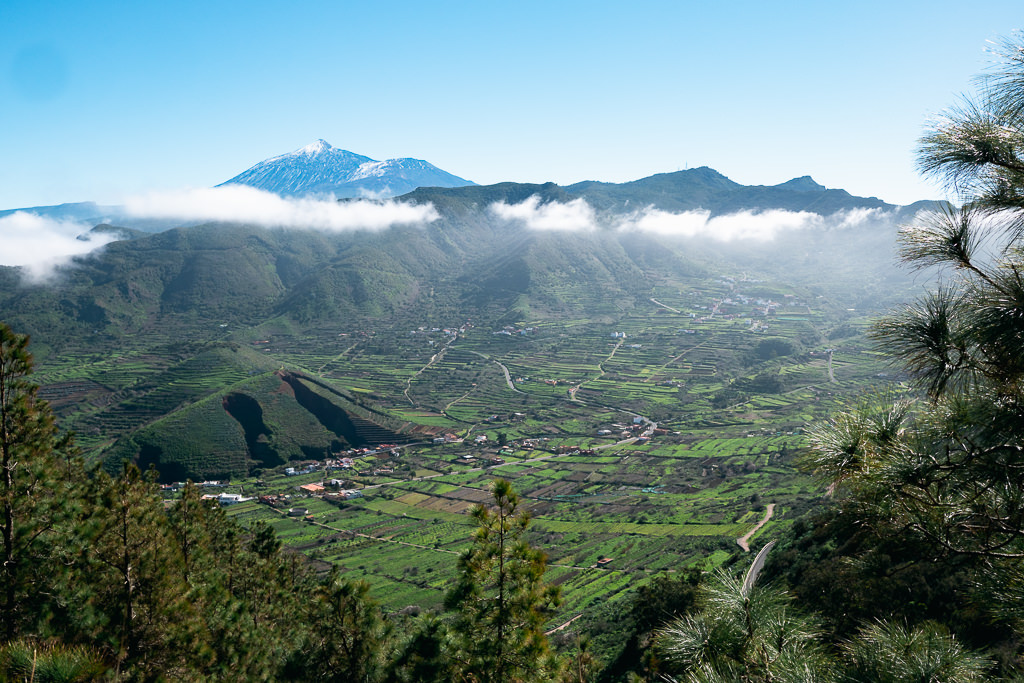 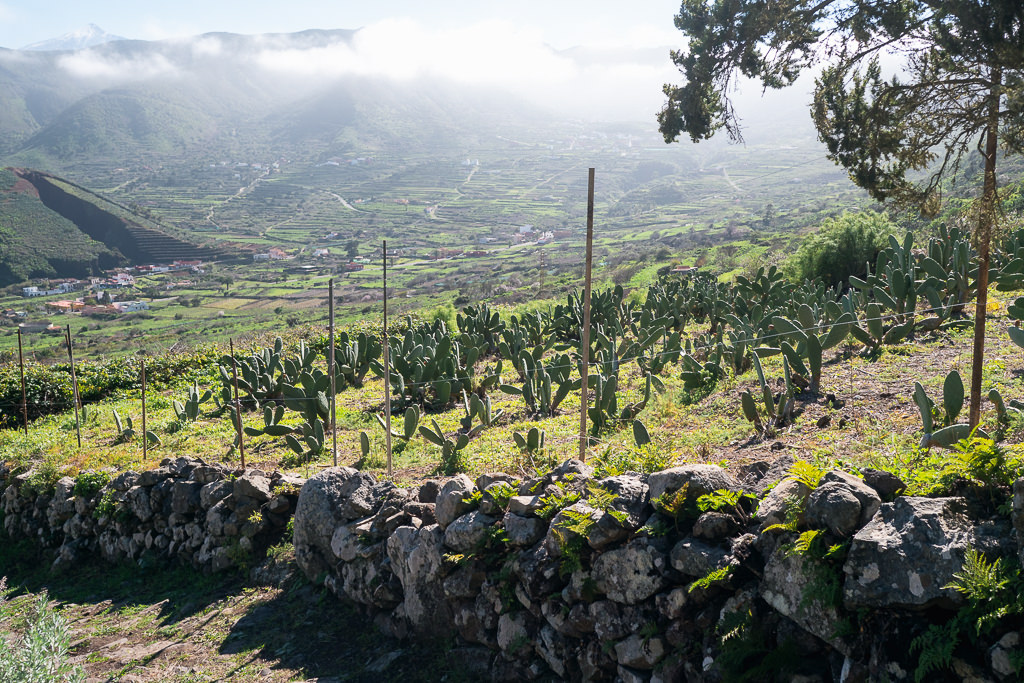 Arguably the best hiking area on Tenerife is the Anaga Mountains, but they are also quite far removed from where most tourists are likely to stay on the island. If the Teno Rural Park is more conveniently reached, then it’s good to know it offers some hikes almost just as good as Anaga. 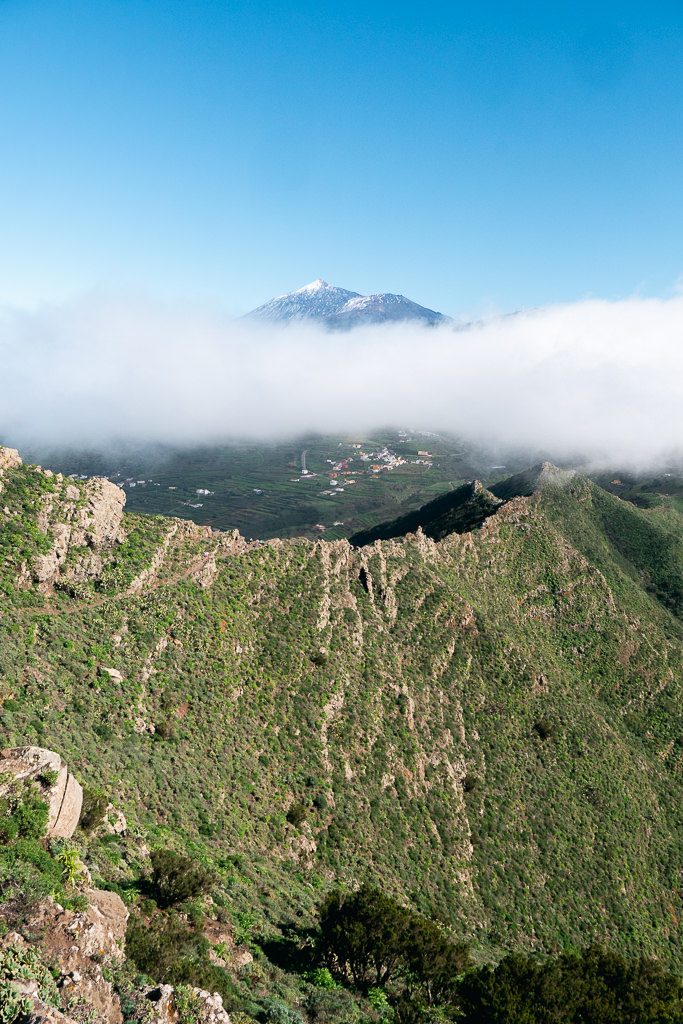 One excellent circular hike, marked TF-57, starts in the town of El Palmar. You’ll ascend a mountain ridge to Teno Alto, from where you’ll have stunning views of dramatic mountains and the island of La Gomera shimmering on the horizon. Passing by several more epic viewpoints, you’ll make your way back down into the valley. About halfway is a hamlet with a cafe or two where you can have lunch or a rest.

El Palmar is only about an hour’s drive from the main resort area on Tenerife. The drive through the mountains is fantastic. Consider a pitstop at Masca, one of the most scenically located towns on the island.

9. The barrancos of La Gomera 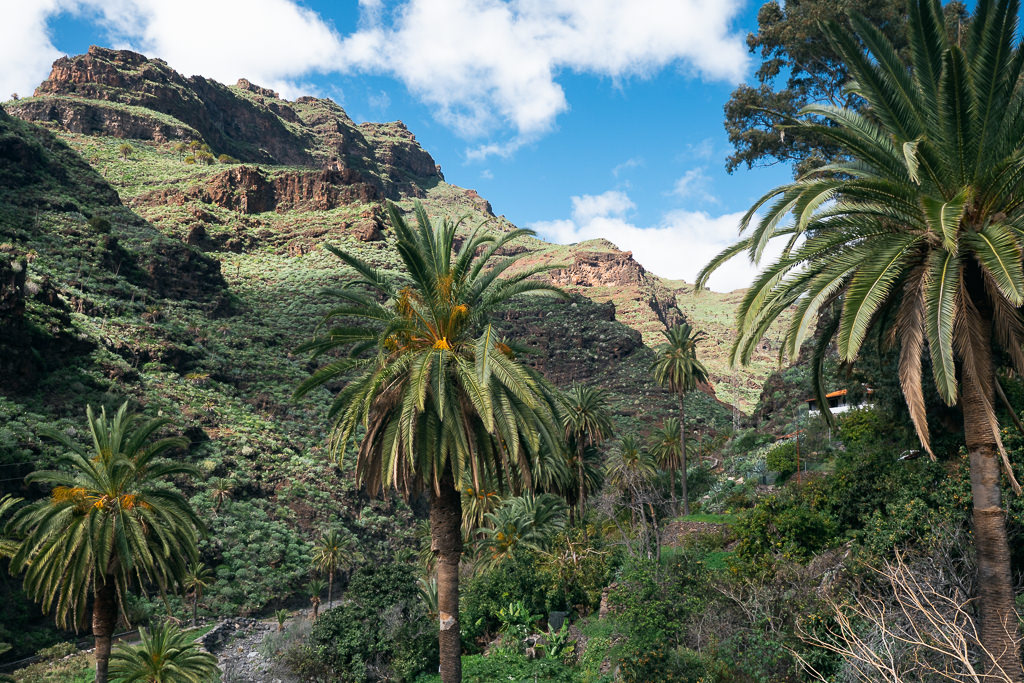 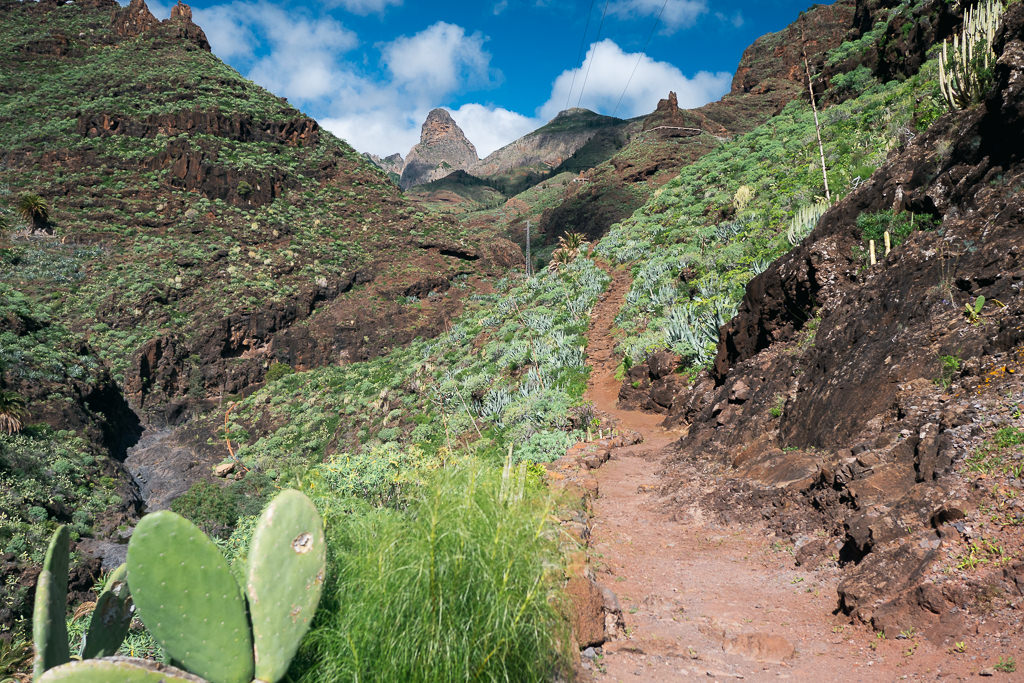 The island of La Gomera has numerous gorges (barrancos) spreading out from its central peak. Some of the nicest canyons to hike through are in the south, near the coastal town of Playa Santiago.

I opted to drive to a town called Taco and to hike north to Lo del Gato and back. The canyon path here offers a varied and engaging landscape, with a little creek, a valley dotted with palm trees, and a few landmarks along the way, including a rusty abandoned hydroelectric dam. It’s a delightful hike, not necessarily focusing on the most panoramic mountaintop vistas, but on the lovely details that you’ll encounter along the path.

Other hikers also recommended the various trails running between the small towns of Taco, Guarimiar, and Imada.

10. Trekking all across La Palma 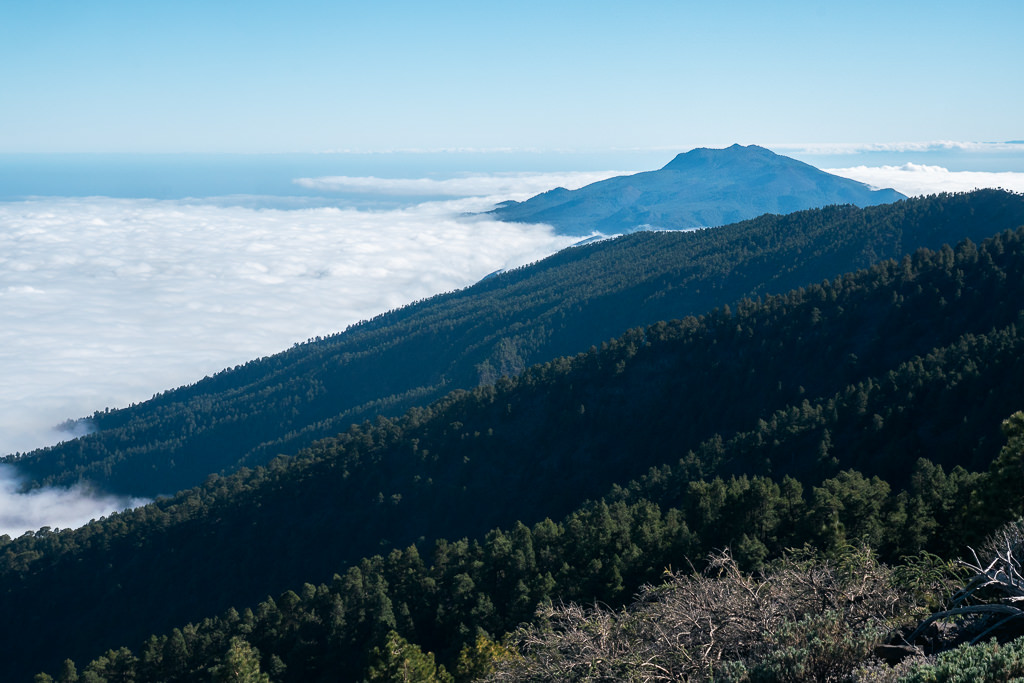 Many of the islands offer opportunities for multi-day trekking, though one through-trail that stood out to me in particular was the GR-131, which runs all the way longitudinally through the middle of La Palma. The full trek takes about 3 or 4 days.

Much of this trail runs at a higher altitude, where there are mostly pine trees and stark volcanic landscapes, creating a strong contrast to the more lush and humid jungles found closer to the coast in the north of La Palma. The main appeal of trekking the GR-131 is that you will be rewarded with incredible views virtually the entire way through, as it follows the island’s crest. 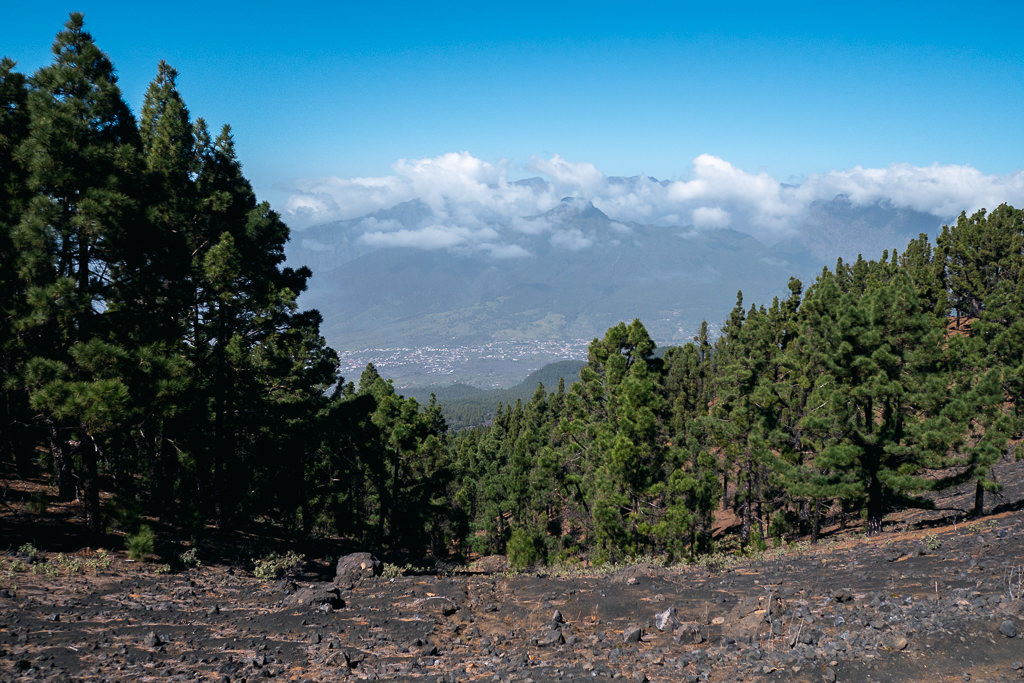 The trail runs through the Cumbre Vieja Natural Park, then past the island’s epic Taburiente crater, and passes by the Roque de los Muchachos, a mountain peak home to numerous international observatories and telescopes. 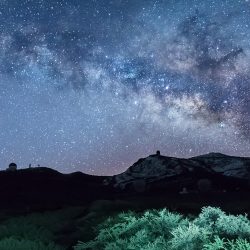 Why You Should Visit La Palma, Island of the Stars 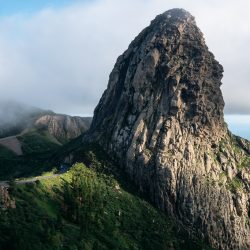 Discovering La Gomera, The ‘Jurassic Park’ of the Canaries

Dig deeper into the Canary Islands

There is SO much to discover on the Canaries, so don't miss our other in-depth guides to help you plan your trip.

See all articles in Canary Islands