You can go for the 'gram — but stay for the food, temples, and historic quarters 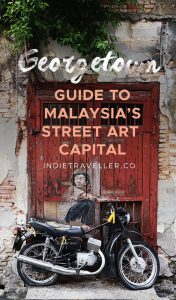 Georgetown on the Malaysian island Penang started out as a British colonial settlement and has recently gained fame thanks to its concoction of cultures, art and a well-acknowledged food scene, all blended in a few square kilometres.

Thanks to the social media feeds of friends and relatives I was under the impression that the street art of Georgetown is supposed to be the city’s major draw. Therefore I decided to put the creative scene to the test by visiting the artsy neighbourhood, just south of Little India. 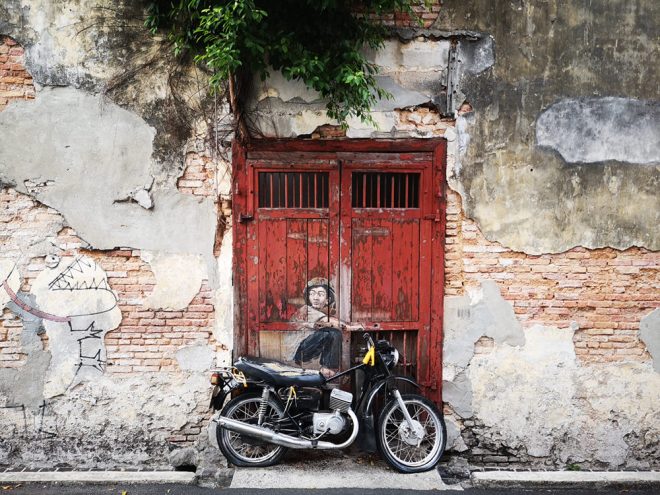 Most of the iconic murals – such as the Boy on Motorcycle and the Children on Bicycle – are, surprisingly enough, created by a Lithuanian artist. Ernest Zacharevic is famous for his urban works  that usually perfectly blend in with the environment.

Although tourists are lining up for their Instagram-worthy shot at the most famous paintings, some cool artworks like the Boy with the Dinosaur are literally inches away and equally rich in details. All the murals are concentrated between Lebuh Pantai and Jalan Masjid Kapitan Keling. The paintings are well worth visiting, although you can wander through a street packed with fantastic art in the nearby city of Ipoh, without being bothered by a single individual. 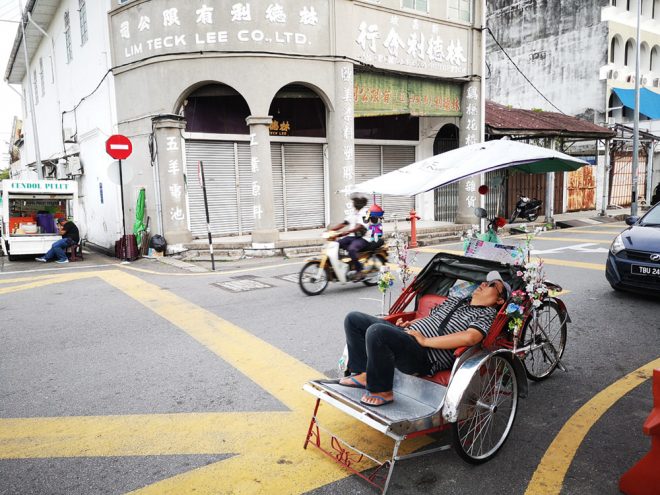 Georgetown is – like all of Malaysia – a blend of influences, which is displayed in the food, architecture and religion as well. Sometimes Malay mosques, Indian temples, and Chinese temples are located on the same block.

One of the most notable religious buildings is Masjid Kapitan Keling, an impressive mosque that towers above the artsy district of Georgetown. This early 19th-century Indian-Muslim house of prayer has magnificent white walls and is topped with dark domes and orange tiles. The arches and pillars give the complex almost a Roman kind of vibe. From 9:30 until 17:30 non-Muslims can have a look inside the mosque after permission from one of the officials standing at the entrance gates. Needless to say, you’ll have to show up with at least a t-shirt and long pants or long skirts.

A stroll away lies the oldest Hindu temple on the island, Sri Mariamman Temple. The entrance gate at Jalan Masjid Kapitan Keling is 7 metres tall and decorated with miniature sculptures of Hindu gods and temples. But it’s the other side of the temple at Lebuh Queen that really shines in all its glory. The façade here is even higher, has golden coloured pillars, precious gems and vivid statues. Built in 1833, it has served as an essential place of prayer for the first generations of immigrants from India. Like at the mosque, you can ask the temple staff permission to enter Sri Mariamman.

Georgetown’s religious triangle is completed by a visit to Han Jiang Ancestral Temple, just around the corner at main Chulia Street. This 19th-century complex also was born in need of a worshipping place for Chinese immigrants. I probably found the entrance gate the most interesting object in the entire complex. Anyone who enters the temple is welcomed by two beautifully painted Chinese warriors, with the most bright clothes and gold leaf. The exterior of the main temple has a rather simple design, but the carvings and dragons figures on the roof are quite admirable.

I walked by the Han Jiang Ancestral Temple many times, but I never saw a living soul going in or out. Chances are you can explore this complex surrounded by no one, which definitely is a rare blessing in Georgetown. 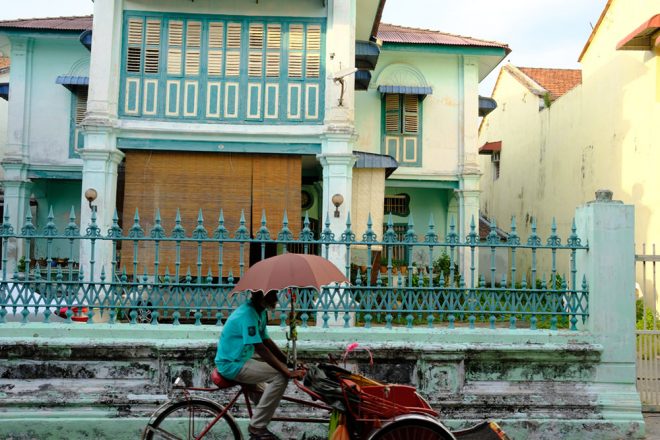 Signs of Georgetown’s long history are located along the coastline in the northern part of town. I got pleasantly surprised when I bumped into the City Hall and Town Hall, located right next to a grass field where local families picnic and kids play with their kites and footballs during the weekends. The elegant buildings look like some typical British Victorian library, with pristinely renovated facades and over one hundred years of history.

Cheong Fatt Tze Mansion is another remaining witness of old times. This indigo heritage house – nicknamed The Blue Mansion – shines thanks to a young, self-made Chinese merchant who decided to build his house at the end of the 19th-century like the fancy ones in his home country. Although the primary function of the Cheong Fatt Tze Mansion these days is a boutique hotel, you can join a guided tour through some of the 38 rooms and many outdoor areas. The spacious courtyards, elegant wooden furniture and chichi decorations truly express the taste of wealthy Chinese merchants who moved to Malaysia in the 1800s. A guided tour of the lush complex costs 18 MYR and lasts for 45 minutes. 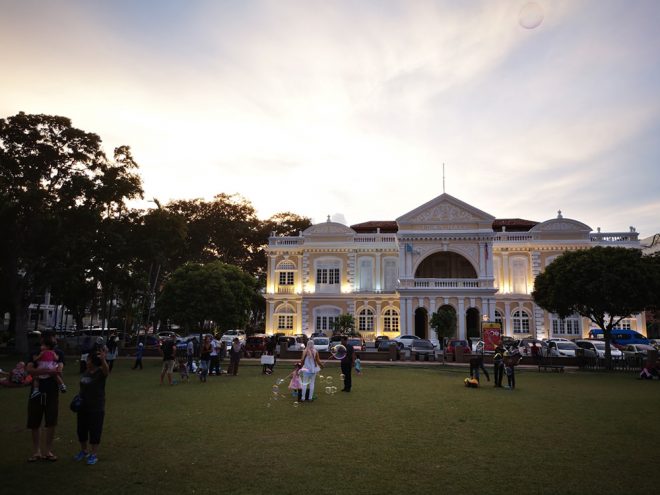 Eat, eat and eat some more

One thing I was most pumped for going to Penang was the food – honestly, that’s what I’m always most pumped for when travelling in Southeast Asia. Georgetown has all the Malaysian goods you crave for, all within a small diameter. I kick off my culinary journey at the morning market in the street Jalan Kuala Kangsar. Vendors sell fresh vegetables, recommend their most exotic fruits and chop fresh meat right in front of you.

Also, you can get your hands on breakfast staples like Chinese pork and rice porridge, Hokkien noodles, dim sum and fried tofu in soy sauce. Most of the stalls are located in the hawker centre, halfway the street. This is a pleasant spot to start the day with an authentic Chinese-Malay dish and extremely affordable beverages.

Chulia Street comes to life at night, when small stalls pop up on the side of the road. Most of the vendors sell bowls of noodles, fresh fruit juices and oyster omelette, another food icon from Penang. The street dishes plated on Chulia Street are fairly affordable, but if you really aim for cut-priced food, then get yourself some nasi lemak for less than 2 MYR. This is a Malaysian national dish, which in restaurants is usually properly served on a plate. Not with the street version. The little bundle of rice cooked in coconut milk, chilli paste, peanuts and meat or fish is wrapped in a banana leaf, from where you can scoop out the nutritious goodness. You can find decent nasi lemak on the opposite side of the street from the main stall area 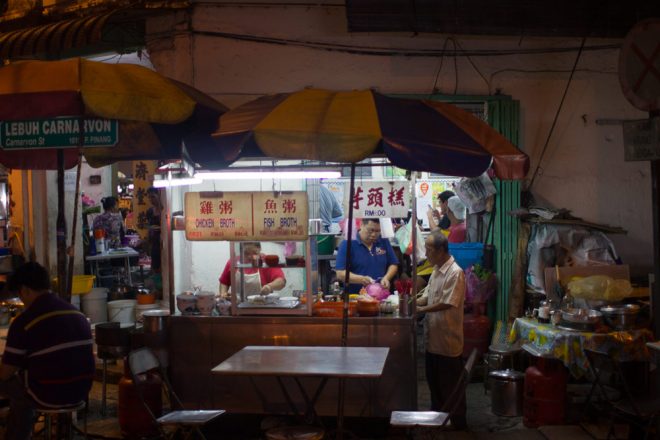 To complete the full Malaysian food quest, I obviously had to try Georgetown’s Indian gems as well. I can confidently say I wouldn’t be embarrassed licking all my fingers one by one in Restoran Kapitan and Karaikudi Indian Restaurant.

Restoran Kapitan is an icon right in the heart of Georgetown, serving up Indian classics like tandoori chicken and fluffy naan bread. Their signature cheesy-cheese naan is a joyful delight that makes your chin drip with cheesy goodness. The chicken curry dishes are to die for as well. So are the biryani and lunch plates at Karaikudi Indian Restaurant. Scratch the surface of the Malay Indian cuisine by sampling flavourful biryani rice, soups, several types of Indian bread and a wide array of chutneys on the side.

Try as much as you can, for the true soul of Georgetown can be found on your plate. 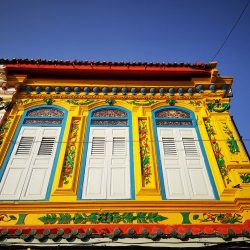 Malacca: A Playground for History Geeks and Foodies 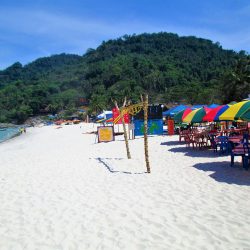