The Dumb Economics of Travel Blogging 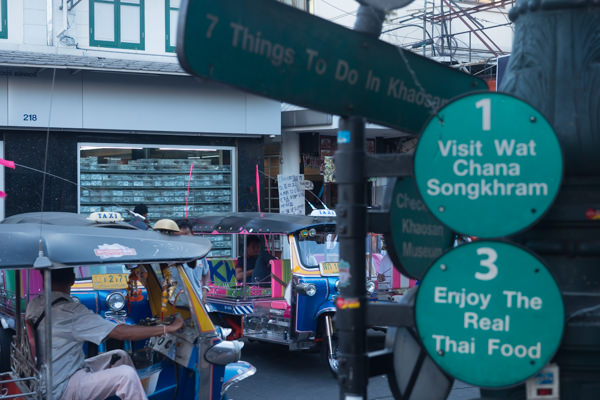 I wanted to give a bit of insight today into how a blog like mine works behind the scenes — and share with you some of the motivations that may drive what I write about.

You see, it can sometimes seem like travel blogs are overly focused with certain topics that may not be that exciting to the more experienced and in-the-know travellers. But there are often good reasons for why we do cover those topics, which I don’t think is always totally understood.

What made me want to write about this is a comment I got a while ago to a post I published about Chiang Mai in Thailand. You can see the comment here; but basically, it was a complaint about how blogs sometimes cover similar topics in a very similar way, like… listing some of the top things to do in Chiang Mai (ugh… yet another one of those?).

I completely understand the reaction. If you’ve never been to Thailand or know nothing about Chiang Mai, you’ll probably be very interested to learn about this city. But it’s actually one of those places pretty much every traveller and their dog has visited at some point, and so many blogs have covered it. When it comes to Asia, it’s easily one of the least original places to write about.

So, then, why be the umpteenth blog to do so? Why bother at all with such a mainstream and on-the-map place when you could be writing about somewhere way more original?

It probably doesn’t make sense… at least, not until you see how popular places like Chiang Mai stack up against the less popular ones.

Why I keep writing about Thailand

Whenever I mention I’m a travel blogger, I think people usually picture me scouring the world for the Most Unusual and Adventurous Places.

They probably picture me working on some magnum opus on the forgotten buttcracks of mid-northeastern Bulgaria — some crazy overlooked place that will totally surprise you. Maybe they think my ideal sort of content would be a story about, I dunno, drinking testicle soup with goat herders in remote Kazakhstan. Because that’s super shareable, right?

But in reality, I spend a lot of my time thinking about relatively well-known destinations and things that are at least more or less on the beaten path.

That’s difficult to admit, as it doesn’t seem quite so cool. But blogs like mine rely in large part on search engine traffic, and that means you often end up merely responding to what is popular.

That’s the reason why I (still) publish about Thailand. It’s a country visited by 35+ million people a year, so clearly many people seek information on it. My blog happens to be well established within the topic, since I’ve had Thailand content for 5+ years now. Tens of thousands come to Indie Traveller each month looking for tips specifically for Thailand — and I want to give them what they want.

Here’s a chart showing the relative number of pageviews for destinations on this site: 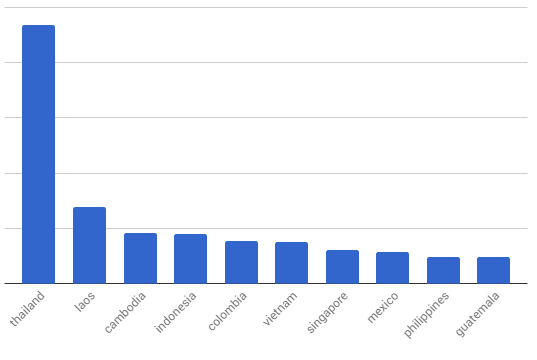 Whoa! Look at Thailand just lording over all others like it’s the Burj Khalifa.

Now, it’s strange to admit… but in my heart of hearts, I’m not that excited by Thailand anymore.

Back in January, I passed through Thailand for the 5th time, and it felt a bit too familiar. When I now write about Thailand, I have to try to see it through the eyes of a first-timer for whom everything is still totally unfamiliar and exotic. If it weren’t for my blog, I’d probably have been exploring somewhere completely new.

Thailand is an amazing starter country. But these days I get more excited about going to more obscure places… like off-the-trail places in Laos, or a little-visited country like Armenia which I came back from just last week.

Yet there is often still a hand steering me towards more obvious hotspots… as these are simply the ones that end up paying the bills.

And yes, this can create an annoying self-reinforcing cycle!

The types of content I write are also often dictated by demand. You might be surprised to see the different levels in pageviews for a travel guide, versus something that’s a story, a photo essay, or an opinion piece. 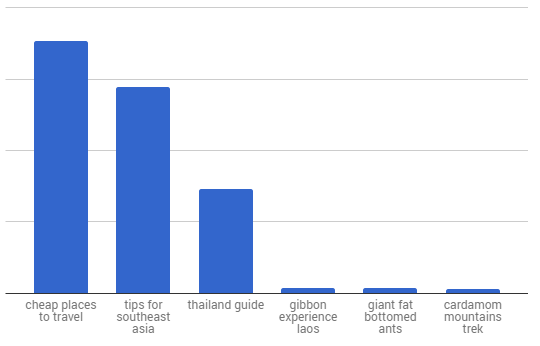 Of course, it’s possible that I just really suck at storytelling. Producing a truly good narrative piece can be like squeezing water from a rock. Not every travel experience makes for a great story and many angles have already been done to death. But I’d like to think I do at least a decent job with more creative posts every now and then; I like my story on the Cardamom Mountains region of Cambodia from earlier this year, for instance.

But it actually doesn’t matter how amazing (or not) your stories are; it’s just that these days most visitors come to a site from search engines, and these search engines typically reward more informational pieces with more visibility.

From a cold bean-counter perspective, the travel guide style content on my blog is 20X to 50X more valuable (at least, in terms of making the blog generate an income) than even my most-read-ever story.

And it’s often necessary to achieve these volumes at least somewhere on your blog, as advertising revenues don’t amount to much on the web — most of my content is, in a certain sense, entirely loss-making.

But I’m not complaining

That’s just the nature of the beast though: the things that generate income for a travel blog and the things that are the most exciting/original/unusual aren’t always the same.

I usually think of it this way: 20% of your content is probably going to be popular stuff targeting a wide audience that does all the heavy lifting. And this enables you to do the other 80% — the long tail with the more peculiar or personal stuff.

(I’ve heard this had long been the case for travel magazines, before blogs were even a thing. The cover feature basically subsidized the smaller stories, though at the time they didn’t have detailed analytics to know this for sure.)

I think it’s important to still do posts because you want to do them, not because you know they’ll get a ton of eyeballs. When success is only measured in likes or pageviews a travel blog will clearly lose its soul.

I’ll surely be writing about Armenia soon, but I’m under no illusion that these posts will be a big hit. They’ll get like 0.0001% of the pageviews. But Armenia was a meaningful experience to me, and someone out there may find my posts on Armenia meaningful too.

I guess my point, though, is that you shouldn’t judge us too harshly. If you see a blog covering some same-old stuff like Chiang Mai, or maybe doing very obviously commercial posts (e.g. listicles on the best hostels to stay), then keep in mind those posts might well be subsidizing something else down the line… like that juicy narrative piece on some place you’ve never heard of. 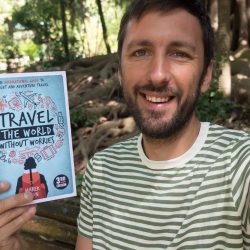 4 Lessons Learned From Writing (and Re-Releasing) My Book 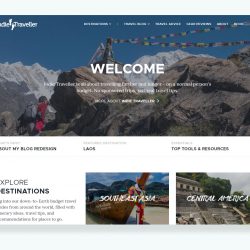 How (and Why) I Redesigned My Travel Blog

The Dumb Economics of Travel Blogging 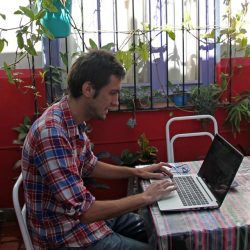 10 Ways To Promote Your Blog & Grow Your Audience 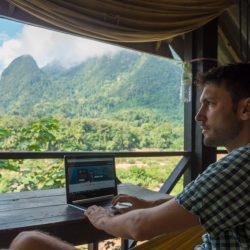